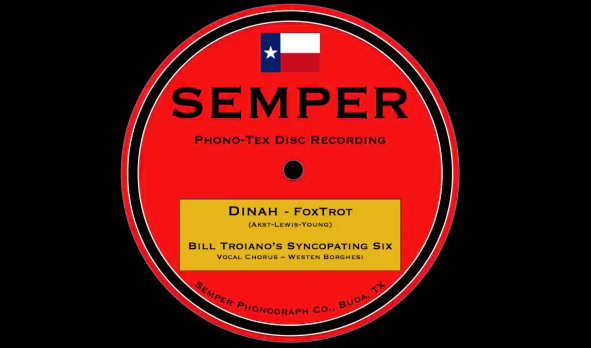 East Side Dandies is a collective of musicians based in Austin, Texas that love to bring back the beautiful nostalgia of 1920’s cracker-jack jazz, or what others like to call, hot jazz. Consisting of rotating musicians and their instruments, this musical group was formed in the past ten years and while the music stays the same, the line-up often changes. East Side Dandies have played at various venues around Austin, Texas and their shows are known for their vivacious dance parties. Personally I have yet to see the band perform live, but one day whilst sipping coffee at Book People café: I heard music playing and for a split second I thought I was listening to an old movie track or a vinyl album recorded from the 1920’s. To much surprise, when I inquired I was informed that the timeless music I was hearing turned out to be a track from East Side Dandies. Immediately I was intrigued and wanted to learn more about this unique group of artists. 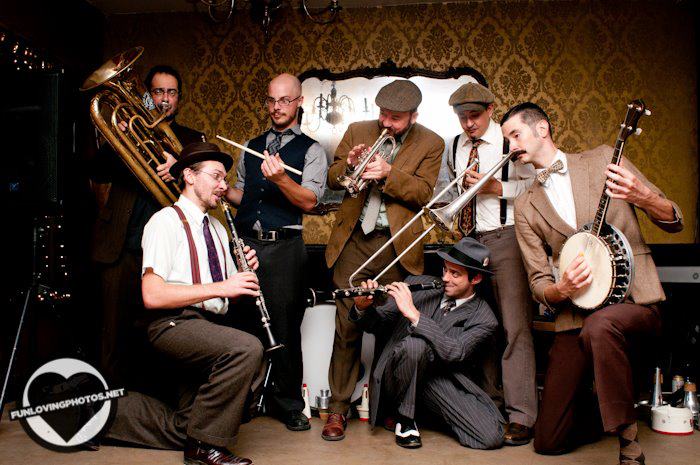 Nicolette Mallow: How did East Side Dandies come to be a musical group in Austin?

Westen Borghesi: It all started by accident. My buddy, Reese Gray, had just moved to town and was living with me. I had met Reese touring in the Asylum Street Spankers. He needed some extra cash and the East Side Show Room had just opened. I heard they were looking for some folks to play some piano over there. So I hooked him up with a gig over there playing stride and early jazz solo piano every Thursday. The following week, Reese invited a recent transplant and friend, David Jellema, to play a duet with some cornet and clarinet. Then the next week Jon Doyle sat in playing reeds and I was tenor banjo. Soon after I invited my long time friend, collaborator and slap bass legend, Ryan Gould, to come out and play string bass. At that point, the band was essentially complete. Eventually we had a rotating “alumni” of friends and musicians that would stop-in or sub-out for some of the players. We played every Thursday to a packed house of eager listeners and dancers alike. Mickie Spencer, the owner, designed the place immaculately, which made it very fitting to the style of music we were playing. The size allowed us to play acoustically. She let the dancers move the tables back for dancing, and people liked to dress up a bit jazzy and fashionable, which contributed to the atmosphere. It all really made for an electrifying time and place. 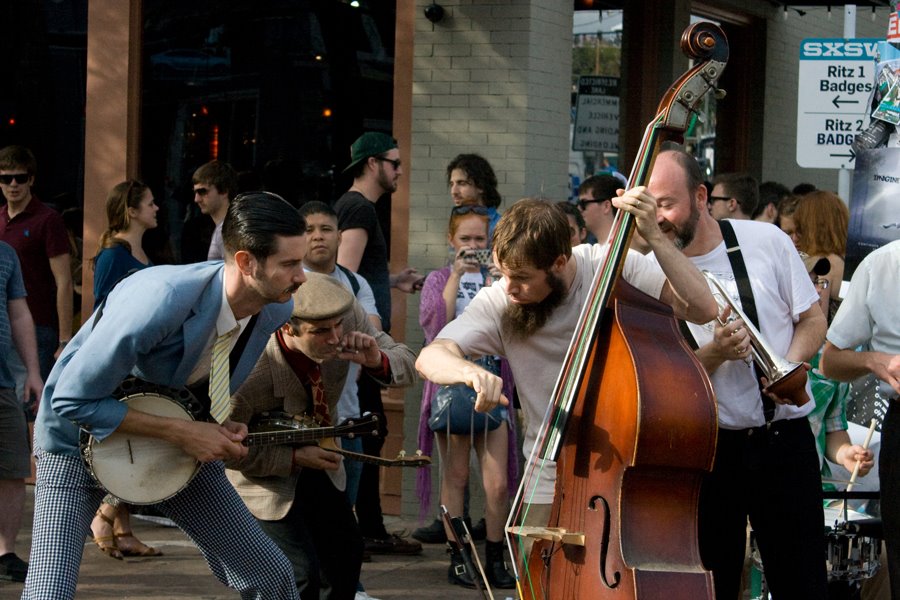 NM: What is East Side Dandies musical style? Jazz seems to be a broad range of sounds and since I have rookie knowledge of jazz. My mind thinks of Miles Davis or Chet Baker or Louis Armstrong… What style or time period of jazz does East Side Dandies like to play? I read it was early American jazz, but what does that entail?

WB: Our musical style in a nutshell is hot jazz and dance music of the 1920’s. If you were to transport us back in time: we would be a typical band from around 1925 to 1927 playing for young folks in their 20’s to dance to. We would’ve been playing the popular sound of that specific time period. You would’ve heard us in a late night speakeasy, or even a college frat party. It can be hard to describe “hot jazz” to people that don’t have a reference. I usually have a hard time describing what hot jazz means without playing someone a few examples. I suggest listening to “At The Jazz Band Ball” by Bix & His Gang or “Steamboat Stomp” by Jellyroll Morton’s & His Red Hot Peppers. After listening to those, you’ll get it. Hot jazz is loud, syncopated, chaotic yet cohesive, a noisy yet melodic style. It was most certainly the punk rock of its time. Personally I think that’s why I was attracted to it in the first place. I was listening and playing a lot of punk rock, until I heard hot jazz. That’s when I realized that hot jazz is the real, original punk.

WB: What I’ve told people for years is, “I didn’t go looking for jazz, it found me”. I can only speak for myself, but I’m pretty sure I was attracted to 1920’s jazz because of how I grew up. I grew up as a kid in the 1980’s, without cable television. I had a limited amount of channels to choose from in Denver where I grew up. Pop culture references from the golden age of radio, cinema, music and television were still making its way into popular culture of the 1980’s. I watched a lot of Looney Tunes and Tom & Jerry cartoons, which were absolutely loaded with ragtime, jazz and film references of an earlier time. Every morning during the weekdays we had “Blinky The Clown”, who was basically an old hobo vaudeville clown. On the weekends after Saturday morning cartoons, I would watch reruns of “Little Rascals” which featured the music of Leroy Shield. Or “The Three Stooges” who basically stole every good gag from early silent film comedies and applied them to their own comedy shorts. Then after those, they would show Charlie Chaplin, Buster Keaton, and Harold Lloyd silent comedies—which may as well be cartoons in my mind—and those films were loaded with hot jazz soundtracks. After the silents, they’d show early talking pictures and musicals through the rest of the afternoon. That kind of stuff was always on in the background at some point or another while growing up, so it makes sense that when I heard it again as an adult, I was naturally drawn to it. 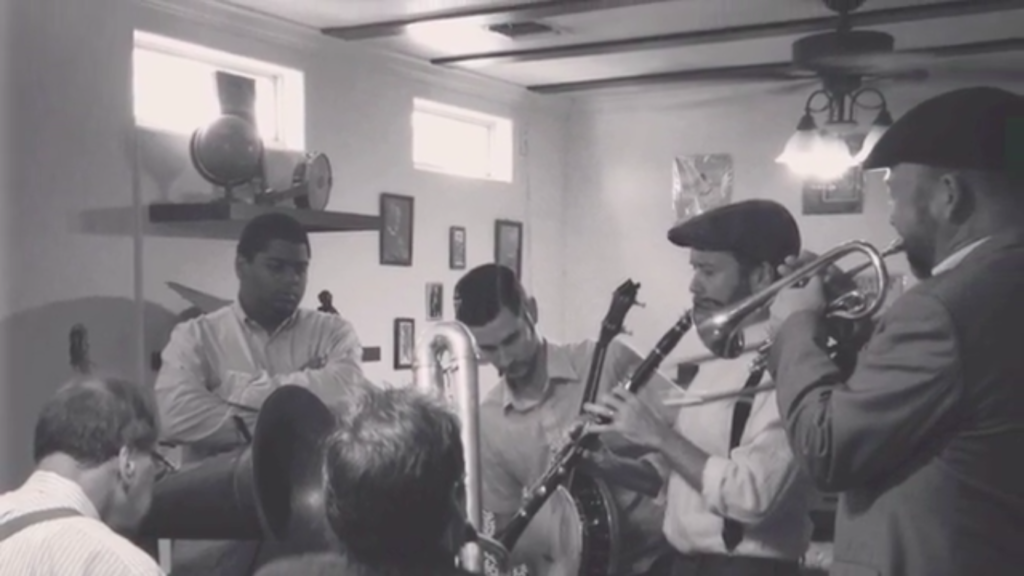 NM: Which venues does East Side Dandies like to play at most and why?

WB: Well, as I said before, East Side Show Room is where we were born—and we loved playing there—but it’s no more. Lately we haven’t played as much because venues that are fitting, are limited, or simply don’t offer enough money. Some of the places we’ve played in the past are the Continental Club, Antone’s, Firehouse Lounge, White Horse, Swan Dive, and more recently Blackheart. I tried to get us into Stay Gold because I thought it would be a good vibe and match, but they just weren’t getting back to me. I thought the Skylark Lounge might be cool too, that dive bar feel is perfect for what we do. Basically we like venues that fit with our music, small enough to feel like a sketchy jazz club, but big enough for dancing.

NM: Has the band released any albums?

WB: No official albums have been recorded thus far. Ultimately, I could make a lot of excuses, but basically it just comes down to laziness. We’re all in tons of other bands and hustling harder than ever to make ends meet in Austin. Which makes it hard to come up with really solid arrangements, intros and outros that we would need to make an adequate recording. If we really put some effort into a recording, East Side Dandies could make it happen, but as they say, it’s like herding cats. The closest thing we’ve done is through a young friend and colleague of ours, Colin Hancock. Hancock likes to put together “pick up” studio bands who then pick a few tunes, get together, quickly arrange and record some tunes straight into and old wax cylinder recorder from around the 1900’s or teens. The playback is amazing, it literally sounds like a real band from 1924! We did one of the early sessions with him in the living room of our old house with our pal and legend, Hal Smith on drums. We’ve since done many recordings in different configurations with Colin, usually featuring many member of East Side Dandies. Some links a few recordings can be found online on Semper Phonograph Company’s YouTube page.

NM: Does ESD write their own songs or just cover songs, or both?

WB: No, we generally do not write our own songs. We pretty much just stick to the good ole’ classics. Most of our songwriting gets contributed to other bands. On occasion we’ll just play a “blues” and improvise, but that’s about it.

NM: Any future tours or shows?

WB: We recently had a show at Texas Trucklandia Festival this October. But no other future shows as of now, but we’ll take the big bucks if anyone has ’em out there! Or if it just sounds like a swell time. Although, most of us play in a band called Thrift Set Orchestra every Wednesday at White Horse from 8:00 to 9:45 P.M.. That bands combines some 1920’s hot jazz with 1930’s early swing.

NM: Will ESD continue to focus on ‘cracker-jack, 1920’s hot jazz’ or branch out into other genres of music?

WB: Cracker jack jazz is the only kind of jazz we’ll ever digest! Hot jazz or die! 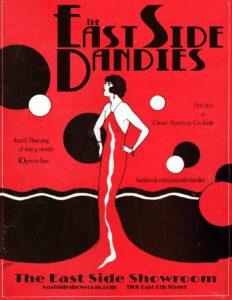