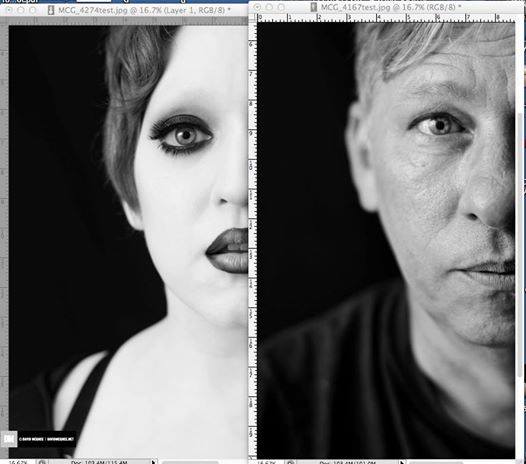 The first thing I noticed when seeing Toxic Water perform was the odd assortment of homemade percussive instruments made of various metals and springs. The lack of typical band equipment like a drum kit, big amplifiers, etc peaked my interest.  There were no keyboards or huge collections of stomp boxes that you find with so many “art/noise” bands.  The back of the stage was covered by a huge bed sheet fashioned into a projection screen, though the venue’s backdrop I am so accustomed to seeing there still remained in the form of a projection.  I found myself intrigued before I had heard a single note.

Two people came onto the stage.  The house lights dimmed and the club’s logo was replaced by a kitten video.  The kitten suddenly jumps and simultaneously this bizarre cross of dance music and slide guitar blues filled the room.  Jessica sang us a song about humans becoming one with their computers, an ode to trans-humanism.   The second song was completely different.  It had a very warped and dreamy quality.  Every song this band performed seemed to hold something different and there was a surprise around every corner.  Midway into their set, Jessica and Richard then set aside melodic instruments in lieu of the homemade percussive ones.  The next thing I knew they were both playing guitars and delivering the most bizarre rendition of the Carpenters, “We’ve Only Just Begun”.  Songs started come one after another and each one was more dark and intense than the last.  The music and video became this throbbing dirge that climaxed in a deathly scream.  The duo then quietly left us in stunned darkness.  I wasn’t sure what I had just witnessed.  Is Toxic Water a dance band, rock band, industrial band, blues band, noise band, none of the above, or all of the above?

Toxic Water are Jessica Adler & Richard Smith.  The two are married and have been musical collaborators for the past 7 years.  They began their relationship while in the band Bipolar Gentlemen.  Toxic water sprang up as the Gentlemen dissolved.  Jessica is originally from New Orleans.  She has a classical background and has previously recorded as well as performed with Boxcar Satan.  Richard has been an Austin underground staple since the 1980’s playing with Miracle Room, but he is best known for his work with Crust.  These two have taken multi-media musical performance to a new place that is uniquely their own.