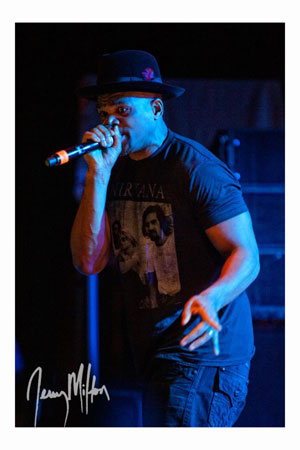 First thing to be said, I did not make it to Day One. I missed X and Run DMC and all of Terrence Malick’s actor people running around. So sadly I can’t tell you about how dumb Val Kilmer looked on stage. I am actually a little happy about that.  So let’s begin where I did, Day Two. The first band I saw on Saturday was the Spits on the Black Stage. I will say this about the Spits, they sound a lot better now than they used to. They have something of a rabid fan base amongst people my age and older. The people love them. Sound wise they are an early punk/garage kind of thing.  They still pull the shtick of the black polyester “Scream” killer robes with the smoke machine cranking thing while they play. Technically though they do play better now, this is better for me because I have seen the Spits many times. Also it’s better for all the fans who just have to trust me on this one. I will say they are doing something right because they went to Europe this year, while I did not. 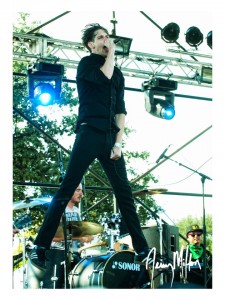 The next band on the Black Stage was the Riverboat Gamblers.  Super energetic and a  real crowd pleaser, let me rephrase that so I don’t sound like I’m at Sunday school. They are super fucking tight and that day there were really on the mark. The crowd loved them and for an afternoon show, people were really packed in. High energy rock and pop with a lot a power guitar to push it through. I was upset that I had wandered off and missed the Taco Cannon but you can’t get everything you want out of life. OFF! was the next band on the Black Stage and they are just always a blast. The hardcore supergroup (think Power Station but not as douche baggy) is Keith Morris (Black

Flag, Circle Jerks), Steve McDonald (Redd Kross), Dimitri Coats (Burning Brides) and Mario Rubalcaba (Rocket from the Crypt, Hot Snakes).  They sound great, they look great and I like it! Keith, known to do a bit of preaching on stage, did so, but not to empty ears and not for too long. It’s proof that hardcore can still be done and done well.  They pulled a really well put together set and kids of young and old slammed together – not me though because I have arthritis.

Luxuriating in the Texas sun, dust flying all around you, and drinking overpriced beer is everyone’s dream day, right? It was a fabulous day for people watching I have to admit. I saw the best couple every created. She was a unicorn with a full on furry sort of mask with a horn, some furry chaps over some underwear and her boobs were painted like a rainbow with her chained lover in full-on leather submissive gear. It brought tears to my eyes and left me in a state to which I could

not figure out how to take a photograph. If I could have I would be selling posters of them on Guadalupe right now. So we wandered around, ate and drank, looked at skateboarding and wrestling and drank some more. Talked to our friends and some strangers to point them to the nearest port o potty and with the setting sun hightailed it over to the yellow tent to watch Nomeansno. 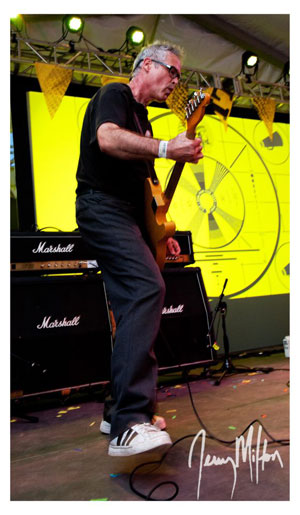 Nomeansno brought back many fond memories of my youth. It was great to see them perform and they sounded just as loud and complex as they ever had. It was nice to hear them joke “you know dirt, we’re older than that.” They are and have always been super musicians who have an avant/noise/punk sound. It plays like jazz for people who hate jazz. Looking over the crowd it was nice to see some kids who I know were in diapers during this bands heyday actually enjoying them. They played their allotted time slot and if we could have had our way they would have played longer.
I’ll slip back to earlier in the day when we were walking around to begin this next part by saying we saw a huge line building up at the Waterloo tent and stopped to see what was going on. So we sort of hung out until this fat farmer looking man started to walk into the tent with a big straw hat, some linen pants, a white shirt, a plaid jacket and sunglasses. I took me a bit to realize that this bloated creature was John Lydon or Rotten whichever you prefer. Then I saw Jah Wobble who looked a bit like a crazed yoga guru. Martin looked normal. Boobs on a man 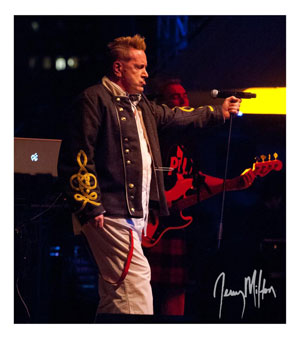 are never a plus but when they are bigger than yours and should be in a bra it’s just embarrassing.  All this being said the next band we saw was PIL.
Public Image Ltd or PIL played the big main stage or the orange stage as it’s listed in your little guide. Now they started out with “This is Not a Love Song” which I loved when I was young. It was a good dance ditty. I sang along and began to notice, this is a little boring. Before you kill me in your mind know this, not all things old are good. I’m not saying that PIL is not good. It’s just not as good as I remembered.  If you are a diehard PIL fan I’m sure you loved it, if you aren’t you probably watched a few songs for the “oh it’s them” factor and walked. We watched and walked, then came back and watched a little more. I can’t say I was disappointed because this wasn’t the part of the festival that I was drooling over so not much lost here.
The last band we saw on Saturday was Refused. I remember them from the 90’s but was never much into them, not sure why. I think I was too busy with the Amphetamine Reptile roster at that point. This being said they were amazing. I was a bit lubed at this point but I don’t think that was what did it. They were a loud, fast, noisy, metal with a dab of off time rhythms. The crowd was out of their minds, knew every word to every song and was angry in a happy sort of way. I kept to the side for fear of being damaged.  Not by someone upset with me but just by being in the midst of a crowd so passionate about the music. We didn’t stay for the whole set because I was damn tired. I will say it was worth the wait to see some of this band on their much anticipated reunion tour.
So the night ended with a bicycle cab ride to our means to get home and then some fast food and sleep. Sleeping is such a good thing. The next day began with 4 hours of work.
Sunday afternoon I get out of work, drive home as fast as possible without getting a ticket and then sprint to see A Place to Bury Strangers.
A Place to Bury Strangers was much of the reason I wanted to go this year and they did not disappoint. Getting in the gate and running to the Orange Stage, slipping backstage with the homie wristband we caught them while playing their first song. If you have never seen or heard this band, which I bet many of you have not, they fucking rule. It’s a loud, sonic feedback with a melodic sound. It’s hard to describe. The crowd for a early day show was immense and very much into what they were watching. It was pure joy to watch guitar player Oliver Ackermann drag amps around and put all microphones he could find in them in order to make the band sound louder. This was met by immediate volume turn down by the board sound man. The frustration at not being as loud as they could be with the sound the stage could have produced was obvious. Didn’t stop them from playing a vicious set and leave the stage screaming with feedback.
We went over to the Black Stage fully intending to watch as many bands as we could, but stopped on the way to eat. I do believe the eating was the nail in the coffin. We did watch Japandroids, but it wasn’t enough to wake me up. They are a good two piece but I’ve seen it done better. There is not much to say about them but that doesn’t mean they aren’t any good.  I was just really tired after spending most of Saturday finding where the free beer was hidden. I believe if I knew I was going to end up writing on this I would have not drank so much free beer. I apologize for my love of beer. One last thing, we did see a bit of Girl Trouble when leaving on Saturday. I still don’t understand why that man hasn’t been sued into non existence.
Jeh. 11/29/12