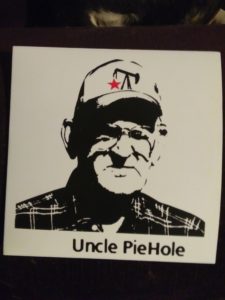 This is what happens when OG punk rockers channel the spirit of an aging Yellow Dog Democrat with a drinking problem so monolithic the local sheriff was forced to confiscate even his riding lawnmower.

Consisting of members of a variety of anatomically-themed bands including the Dicks, Shoulders and Big Foot Chester, Uncle Piehole lurch between backyard BBQ drunken blues, old-timey C & W stripped down its most primal essence and drinking songs with smatterings of jazz thrown in just prove even a redneck can have a little culture. Songwriting chores are split between Buxf Parrot (bass) and Todd Kassens (geetar), with Parrot penning the lion’s share. Alan Williams hits the round contraptions and Walter Daniels makes funny noises using his mouth and things made of metal, plastic and wood.

Underneath the slightly askew take on traditional American music forms is the malcontent, misanthropic punk spirit that brought these guys to music in the first place.

“Big Oil” addresses the dangers of unregulated capitalism, while a number of tunes point out the inherent dichotomy of of being both a Christian and a gun-totin’, Meskin-hatin’ Republican. It’s an oxymoron, moron.

The few times personal relationships are broached in song, feminist anthems they are not. But, hey, what’s a little mysogyny between four middle-aged drinking buddies?

So, sit down, do as the song suggests and “Get Wasted Like a Motherfucker” and then listen – really listen – to the sermon of Uncle Piehole. He knows some stuff.