The Pistolators, The Hormones, The Sweethearts – April 13th, 2018 Carousel Lounge

An open letter to Tim Stegall:

We’ve known one another a long damn time. Three decades is a bit of a stretch but it certainly doesn’t qualify as hyperbole. I’ve reasons to respect you, laugh at you, call you friend, resent you and smack you in your big, smirking mouth. But most of all, I admire you. You’ve slogged away for longer than I’ve known you to carve your own Stegall-shaped stamp into the Wall of Rock next to Lester Bangs. You may not have made it that far yet, but you’re pretty much making a living doing what you love in an increasingly hostile city. I doff a rarely worn hat to you, sir. I have no doubt there will be a collection of your rock and roll writings in one cohesive collection one day. You do your job and you do it well.

Recently, you went above and beyond and did a write-up for the Casino el Camino benefit at C-Boys when it looked like no one else was going to. Thank you.

That said, please take this as constructive criticism from a friend, fellow writer and someone well aware he is not currently in a real band and therefore on the ever-shaky ground of a critic with no output of their own to back their opinion up. Unless you count this mayhem.

And I apologize in advance for the snark. I can’t help it. I think I may have a problem.

The Pistolators opened the show. These guys are old pros no matter how drunk and how annoyed they are. I’ve only seen them once before, but I’m pretty sure that when Frankie Fixxa grumbled into the mic, “I don’t wanna be here,” it was NOT part of the song. But he had a shot off a flask and he, Edward Willie and company rocked solidly for the next I don’t know how long. I tend to get transported. I won’t mention the mini-drama that occurred when they tore into “Born to Lose.” Oops.

The mood was good. The mood was ready for more rock. I was not the only one totally psyched to see you and Ron Williams together again. The anticipation built.

Then you got in front of a mic and said something to the effect of, “Yeah, I used to think I was a New York Doll, now I look more like Divine.” Okay, it was amusing and it’s good that you can poke fun at your own meticulously honed style. And self-deprecation works, but only so far. The only problem was, that was pretty much the first thing you said to me – and roughly the entire population of the bar – when you first saw each of us individually.

Tim, a comedian doesn’t give away his punchline at the meet-and-greet.

Without even playing a note to at least show us that you actually can and do rock, you immediately launched into a tirade about how you can’t keep a band together and people keep quitting on you. I’m not sure if you heard us, but a good number of your fans in the corner yelled, practically in unrehearsed unison, “Well, gee, I wonder the fuck why!”

Look at it from a practical perspective. You knew Ron and Al B. Damned weren’t on as rhythm section permanently. If you are actively trying to recruit a new bass and drums, why would you give the impression that you are some kind of unholy nightmare from the abyss to work with? Gun. Foot. Point. Shoot. 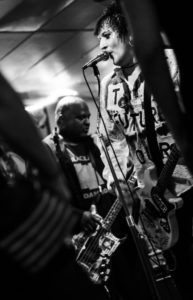 Tim and Ron together again! – pic by Alicia Mallory

Then, at one point, you had a red-headed Celtic Viking goddess standing before you, in adoration. Obviously, she could see what those of us who love you see. But you just couldn’t help yourself. More bitching. I don’t know if you could see him out of your periphery, but Ron was rolling his eyes, making hand puppet gestures and blah-blah-blah mouth movements the entire time you talked between songs (sorry to call you out, Ron). She left. 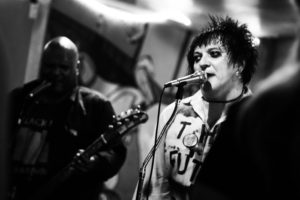 You rock, man. Your originals are all very, very impressive homages to the eras and styles that you love. Your taste in cover tunes are as impeccable as they are educational (I’ve discovered quite a few new-to-me bands thanks to your encyclopedic knowledge of any and all things punk.) In my opinion, I think the problem is – and you’re not alone in this – you take yourself way too seriously, you’re way too concerned with what people think and you’re letting it make you a little neurotic. You’re not focusing on the show you’re playing. You’re focusing on the next show. There are a million other things to do and talk about to keep the audience engaged. 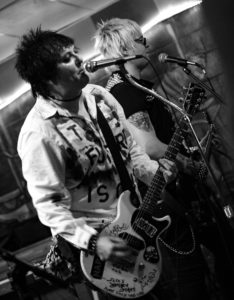 Seriously, dude. You look the part. Own it. With Bjorn Toulouse.  – pic by Alicia Mallory

Look at Jeff Smith, this mag’s seeming best friend, the only real man-crush I’ve ever had and, oh yeah, he struts in front of the Hickoids. Do you know why Jeff Smith is one of the best frontmen we know personally? Because he does not give a fuck if he looks sexy, stupid, goofy, fucked up or insane. And when he blathers, it’s funny and in the moment.

Dude, at one point I just wanted to give you a hug. The only other person who’s evoked that kind of pity in me while they were on stage is Daniel Johnston.

It was a great set, Tim. When you guys were in the zone – which was quite often – it was epic.

The Sweethearts closed. I felt bad I didn’t pay as much attention as I should have. I first saw them years ago when Linnete was working at Buffalo Exchange. They were great then but now they are worthy of huge crowds and were just off, I was told, a successful tour. Great west coast pop punk sound with the ability to back it up. Linnete is a Latina Gwen Stefani with just enough Polly Styrene to give a legitimate edge to her presence that us old folk require. She is charismatic, she can belt it out and dance and she’s cute as a button. Oh, and married to the guitar player, Ren. The four songs I watched were fantastic! (Sorry, guys.)

Tim, it was an amazing night, but the negativity was a bit taxing. If you’re going to bitch about something, bitch about something we can all relate to, like the American health care system. How many of us don’t have coverage because we can’t afford it or refuse to suck the corporate teat to get it? I know you could use better coverage. Just about everyone we know could – I need to fix this damned tooth. Another obvious, neon orange target compulsively tweets from the Oval Office. Oh, how about the fact that the US now has concentration camps for children? Or, hell, keep it light and complain about the shitty breakfast taco you ate that morning and let everyone know “that place sucks” and give us a head’s-up. I would say roll in glass, but you and I are both too old for that shit.

Which brings me to my random yet inevitable picking on a musician I don’t really know for reasons only I could come up with:

Bjorn Toulouse. Buddy, you are so damn close yet oh so, so, so far. You look great.  You’re tall, imposing, tattooed and sporting indoor sunglasses. You have a fantastic stage name. Perfect facade (maybe?) of Eurosnobbery. You shred a damn mean guitar with either a fine sense of when to be slightly sloppy or just that way anyway. I’m going with the former. Why? Because, Bjorn, I don’t think you have it in you to be naturally sloppy.

You looked like Rob Halford in a summer outfit, i.e. black denim rather than leather. The metal studs were shiny and unmarred. No grey spots on black denim or the start of a knee-hole after a night of one too many shots. Or, for the sober folk, a night of seeing soul-changing punk rock and in your exuberance, a trip and slight sprawl occurred. I didn’t really see you imbibing much, so maybe you wouldn’t face plant as I am wont to do, but a bit of a spill would give your uniform a bit of character.

The Sweethearts were rocking the house, so I guess you didn’t catch my drift when I screamed in your ear, “Dude, you need to roll in a gutter!” Since your response was something like, “I’ve done plenty of sordid things in the past,” I assume you thought I was offering something.

A). I’m generally too broke to have shareable drugs, and, when I do have them, I usually reserve them for friends. I would’ve gotten Tim stoned if he was into that. Actually, now that I think about it, I’m not sure I want to see Tim stoned.

Dude, I just wanted to take you outside and roll your ass up and down the street in the kindest and gentlest manner possible so you didn’t look like you just came out of Hot fucking Topic and were given a protective suit cover and private ride to the Carousel.

And to be clear, I don’t think you’re gay. I got the impression you have a girlfriend. It’s just when I think of someone who is fastidious about the glimmer and integrity of their metal-on-black wardrobe, I think of the singer for Judas Priest.

Punk ain’t that put together. 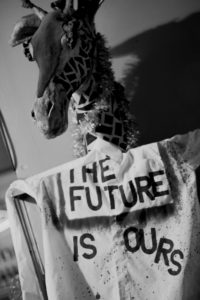 I hope there are giraffes in the future. – pic by Alicia Mallory

And done with that.

Look Tim, even your sense of what to put on a shirt is awesome. “The Future is Ours” shirts are genius on many levels, and I know you know that. For the band, for the angry young people who are going to overturn the stranglehold psuedo-Christian oligarchs have on our lives, to maybe there still being a giraffe alive after the scions of major food chain moguls have decided they’re bored with killing beautiful, defenseless creatures.

At the end of the day, you, your opinions and your band are things I respect. And I am not alone in that. Just freaking chill a little.