Posted on January 2, 2019 by Nicolette Mallow 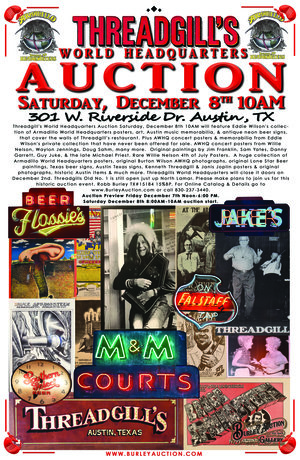 The city of Austin was forced to let go of another local landmark: Threadgill’s. As of December 2, 2018 – the doors to Threadgill’s are forever closed. Change is inevitable in a growing, booming city like Austin, Texas. The local Austinites and its artists are becoming forced to acclimate to constant changes. But that doesn’t make this loss any less uncomfortable or any less bittersweet, especially for the owner Eddie Wilson.

In 1981 on New Years Eve, Threadgill’s opened its south location. In 1996, Threadgills’ World Headquarters opened its door within south Austin. For decades, there were two locations in Austin: one up north with a 1960’s Texas theme and another down south on Riverside with a 1970’s style. Known for their infamous chicken fried steak, southern style cooking and American soul with a juke box that held over 100 albums – Threadgill’s will be deeply missed by all those that grew attached to the music, food and comfort over the last few decades. 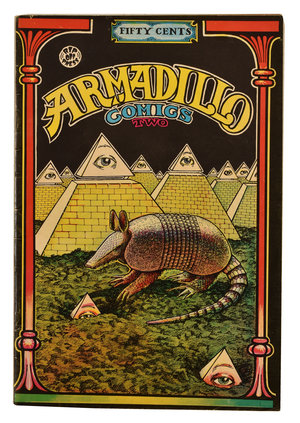 “Amid rising rent and lease uncertainty, Threadgill’s owner Eddie Wilson tried everything over the last couple of years to keep “clinging to the curb” at 301 W. Riverside… Now, the veteran businessman that helped catalyze Austin’s vaunted music culture as owner of the Armadillo World Headquarters (1970-1980) confirms that Threadgill’s Riverside location will close. His staff, some of whom have worked there for decades, have been notified of the closure. The original Threadgill’s, “Ol’ No. 1” on North Lamar, will remain in business. Wilson says paying over $40,000 in monthly rent has become “untenable.” According to him, his landlords, the Crockett family – with whom he’s enjoyed a “great relationship” over the years – don’t want to sell the land and property taxes dictate a higher rent than inexpensive chicken-fried steaks and Five-Vegetable Plates can provide for. This marks the end of Wilson’s career occupying territory on a once quiet, now bustling strip of W. Riverside. After his legendary concert hall, which once sat in the adjacent lot, closed on Dec. 31, 1980, it took until 1996 for him to open a second Threadgill’s just a few hundred feet away. With its exit, Austin loses two great stages, indoors and outside. Just last night, the former hosted a packed HAAM Benefit Day concert with longtime Armadillo/Threadgill’s favorite Marcia Ball. The city also loses one of the most soulful, homey, and Austin-centric places to sit down and eat an affordable hot meal in the Downtown area.”

I’ve lived in Austin off-and-on for 20 years. My mother used to take me to Threadgill’s as a little girl. I was always excited about the vast array of vegetables to choose from. There was a distinct smell in there I found comforting. And I always enjoyed the eye candy of neon lights, illustrations and old music posters that included musicians like Willie Nelson, Janis Joplin, Frank Zappa, Freddie King, Van Halen and so on. As an adult, I went to quite a few live shows and had quite a few cold vodka drinks at this Riverside location. I could never count how many times I’ve driven by this building and peeked to see what was going on that day at Threadgill’s. It’s sad to see it empty. On the premises, there was also a beer garden and live music venue. Plus, there was a colorful blue mural that many people, particularly tourists and couples, liked taking a photo in front of. It reads, You Make My Heart Sing. Which is hilarious since one of the worst arguments I ever had on the phone with an ex took place in the privacy of my car outside Threadgill’s. It’s hard to live in a city for several decades without creating good and bad memories. However, when it comes to Threadgills, aside from that damn mural that always reminds me of one lousy ex-boyfriend. I got nothing but love for Threadgill’s. It will be deeply missed. 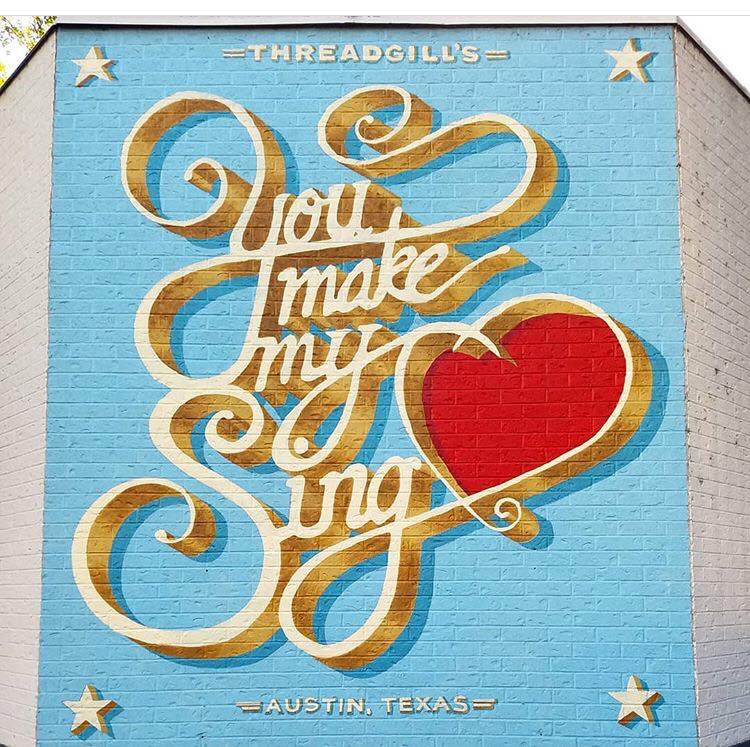 At least us Austinite’s still have another location and can catch live music and a little Texas nostalgia at Threadgill’s up north. For those that didn’t get a chance to say goodbye, the online storeseems to still be open and selling merchandise: t-shirts, baseball caps, baseball tees and Armadillo World Headquarters – a memoir by Eddie Wilson and Jesse Sublet.

“In this rollicking memoir, Threadgill’s Proprietor Eddie Wilson tells the behind-the- scenes story of the Armadillo World Headquarters, Austin’s legendary 1970s music venue, from the moment he first peered into a derelict National Guard armory building and knew that destiny had found him.  He vividly describes how two previously clashing groups – rednecks and hippies- came together at the Armadillo, enjoying a new blend of country music  and rock that spawned a many-named movement: cosmic cowboy, progressive country, and redneck rock among others. Extensively illustrated with candid photographs and music posters, Armadillo World Headquarters recounts the story of this legendary venue as no other book can.” 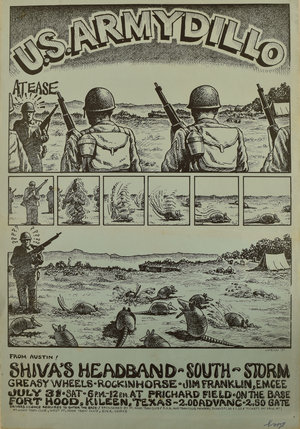