When Sniper 66 first started, besides obviously kicking out badass jams, what was the driving force that gave Sniper 66 life?

When me (Dylan) and Jeff started the band there wasn’t really any mission statement or goal we had in mind, we just wanted to play music and hang out with our friends. After 9 years, I think that’s still the main goal. We’ve made so many great friends over the years from touring and traveling; playing gives us the opportunity to visit with people all over.

What did ya’ll set out to accomplish with the band?

To get drunk and make music. We honestly didn’t have any expectation to get any actual acclaim. We thought we’d just be another local band and hoped to get some decent shows with bigger touring bands. We’ve done a lot more than I think any of us had ever expected.

For the uninitiated reading this why did ya’ll choose to call the band Sniper 66?

The day Jeff moved to Austin was the anniversary of the clock tower shooting in Austin. There was a news story talking about it titled “Sniper 66” referencing Charles Whitman being a Sniper, and the event happening in 1966. Interesting fact, I share a birthday with Charles Whitman. The band was together nearly 5 years before I found that out.

Even though I hear melody in all of your records I feel like there is a little more on Annihilator. Can you explain how your sound has evolved from the S/T to now?

Speaking of your sound and writing process one thing I dig is everyone in the band does vocals in some aspect. Is that something ya’ll try to do on every song or does it just depend how the song comes together?

Yeah, well I don’t know if it’s something we TRY to do, but we don’t limit ourselves. We all like singing, so we all find ways to do it. Some times it’s backup vocals, some times it’s leads, some times it’s shared/back and forth stuff. We did set out to get April a song on the new album though. 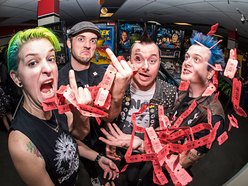 Is there a possibility there may be more songs in the future that let other people in the band sing lead vocals sorta like Rancid does with some of their members every now and then?

Of course. I actually have a song in the works that I think it’s gonna be great for Jeff to sing. Jeremy was the lead singer for his last band, so I think he’ll always write songs for himself regardless.

As far as song writing goes is it more of a group effort most of the time or does each member bring their own songs/lyrics to the table?

It’s really both, I’ve written a couple songs that Jeff sings, he has a few he wrote, I sing a couple Jeremy wrote, I write a lot, I write words over riffs Jeremy writes, it’s just a group effort.

What is the song writing process like in Sniper 66?

Probably the most common way would be, I’ll write a riff, come up with a vocal cadence, and basic chorus. Then I’ll bring it to the band and we’ll just work shop it till it’s refined to the point that we like it. Some times we’ll really like a song, but it just never really works itself out. There are 3 songs we recorded for “Annihilator” that probably won’t see the light of day. We liked them, but in the end, they just never really came together.

For the new album you guys have the concept of one of the nation’s first serial killers. It is also the first concept type album ya’ll have done if I am correct. What made you go with this subject matter?

The first three records all have little Easter eggs on them about the next album. The first record has the words “caput lupinum” on the shoulder of the vulture on the back cover. The second album had hatchets and moon towers that alluded to the Servant Girl Annihilator. Basically, when we were finishing up the album art for the second album, we were already thinking about what to call the next record. Jeremy’s mother had read a book about it and we thought it was interesting, so I wrote a song about it. It wasn’t our intention to have a concept album, it just ended up being a subject we really liked and we kept writing songs about it. Next thing you know, we had 4 songs on the subject.

How does the subject matter on this album compare to the last two full lengths ya’ll have done?

This album is a lot darker than what we’ve written about in the past. We’ve always been a bit of a political/socio-political band, but always with beer drinking anthems as well. There isn’t as much of that on this one. We talk a lot about death, drug use, suicide, murder, etc. Again, that wasn’t our aim from the onset, but it just kinda happened that way. I think I’m gonna focus back on more positive themes for our next release though. We still are a beer drinking, fun loving band. We’ll always take on political topics, but I hope to have more balance in the future.

The cover art on the new album is badass. Did you guys have an idea for it or did you let the artist do his own thing based on the concept?

Jay Roberts from OKC is just a killer artist. He also did the album art for our Euro 7″ release “Buried With Your Boots On”. For this one, I just told him what we had written about, sent him the music and lyrics for the 4 concept songs, and kinda just let the man do what he does. It’s really refreshing to have an artist we can do that with, as we aren’t the most visually artistic group. We love writing music and words, but the visual stuff is better left to the experts.

You guys have done 3 music videos for the new album so far. Since the album is loosely a concept album have ya’ll thought about doing a short movie with your music based on the killer? Or something similar where multiple songs were added to a short movie based on the subject matter?

We have actually, but I’m not too sure that’s where we need to focus our efforts. I think it would be cool, but we don’t really have the time or resources to put something that ambitious together. April and I joked about writing a musical based on it, but I’m not sure if anything will ever come of it.

I feel Sniper 66 is a band that thrives on live performances. That is the best time to catch ya’ll in your element. Can you share some stories of some of the most chaotic/best live shows you have experienced as a band?

Thank you, that’s something we really focus on. Our live show is the best way for us to capture a crowd, so we try not to leave anything on the stage. There was a show in Yuma, AZ of all places that might have been the most rowdy show we’ve ever played. Gear was getting knocked over, my mic got knocked into my face and busted my nose open, a girl broke her ankle in two places. It was nuts. Those small towns don’t get as many bands through, so they lose their shit when a band stops there. That girl who broke her ankle ended up needing surgery, and later got a tattoo of our hatchet design to cover the scar.

What are 3 places in the world you want to take Sniper 66 to play?

Blackpool for Rebellion would be sick, I’ve heard Mexico City has a crazy punk scene, and Southeast Asia would be amazing. Financially, SE Asia is a little harder, but we hope to be able to go one day.

I know there are a lot of influences that go into Sniper 66’s song writing. Could you list some bands that influence ya’ll that may surprise some people?

It may only influence us a little, it’s some stuff that people might not expect from a punk band, but we listen to a TON of 90s country music when we’re on tour. Hah. Garth Brooks is a favorite. And more acoustic stuff like Frank Turner.. we’re all huge fans of him. Maybe not surprisingly, our influences come from Oxymoron, Cock Sparrer, Damage Case, etc.

Sniper 66 is a product and staple of the Austin punk rock scene. Can you talk a little about your time in the Austin scene and Texas Punk in general?

Texas has been one of the best, and in my opinion, most overlooked punk scenes for as long as I can remember. Jeff and I grew up in DFW and Jeremy came up a couple hours outside of the Dallas area, so we all knew each other and bands we shared bills with before we all started playing in Sniper together. The three of us ended up in Austin around the same time and just started playing and having fun. I don’t know how much influence we’ve had on the scene, but it’s had a huge influence on us.

What are some of your favorite songs off the new album and why?

I think “In His Grave” might be one of our favorites. It was kind of a last minute addition and a bit slower than our normal stuff, but Jeremy wrote such a cool lead riff that it just put a great bow on the end of the record. I don’t think it would shock anyone that we listen to oi! a lot, so it’s nice to have a pretty true blue oi! song out.

Sniper 66 has gotten to play a lot of cool fests and with some legends. Do you have a wish list of festivals or bands you want to get on/play with in the near future?

Cock Sparrer is playing Muddy Roots next year… That would be a dream come true for us. Rebellion is in our sights, we’re hoping to get to be a part of that next year as well.

Sniper 66’s new album came out on Evacuate Records which is run by Mike Virus. How did that relationship come about and what does it mean to ya’ll to be working with that label?

The Virus were a huge influence for us growing up, so it’s been pretty special to get to work with someone who was so integral in shaping the scene that we know and love so much. We met Mike when we were out on tour on the west coast in 2015, and he had approached us about possibly releasing our next record. Once we had it ready, we called him up and we’ve been a thorn in his side ever since. Haha 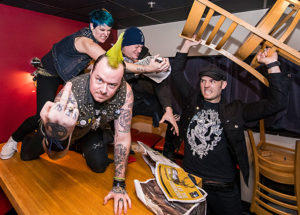 Punk rock is always changing and can have multiple different sounds. How do you keep your songs sounding fresh without sounding mundane or repetitive?

I wish I could take some credit for this, but it’s April and Jeremy that really keep it fresh. They are always looking for new ways to do things. We fight to find balance between new, and what we know works. I want new, but not just for the sake of being different, but new for the sake of being better. It’s hard to know some times while you’re writing, which is which.

2019 is an open book. Are there any cool things coming up for the band that can be spoken about? Any tours or festivals planned?

We have our sights on a couple of festivals, west coast tour, and hopefully back to Europe. Nothing set in stone yet though. We’re going to try to release a split or two, and maybe an EP by years end. Just keep moving forward.