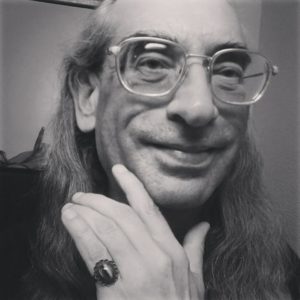 On April 3, 2018, I got on Facebook and received a shock I was not prepared for. This issue of Rank and Revue was already slated to contain memorial/tribute pieces to JJ Offender and Mike Carroll. Then the Izzy Cox tribute album came out and though I didn’t really know her and had only seen her perform a couple of times, the outpouring of love that pretty much every musician I know compelled me to write a piece for her, as well. So, with death on my mind, I see a post from Black Eyed Vermillion’s Kurtis Machler announcing that Leonard Smith had died of an unexpected heart attack the previous evening.

Leonard Smith was a founder and core member of the Austin art noise collective Liquid Mice. In addition to numerous bands, he most recent played jug for Abigail and Hansel and trumpet for Gerry Signfeld’s Atropheed Sac, another noise collective that consists of whoever shows up. The latter “band” is where I first met Leonard. 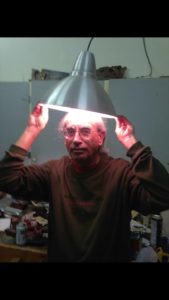 We shared an instant bond through weird, sometimes alienating music, esoteric spirituality and a penchant for psychedelic journeys. The Sac is, and always has been, a chaotic, cacophonous mess for the majority of every set. Because it wasn’t a band. We never practiced and it was a revolving door. The call would go out: The Sac has a show at 710. Or Beerland. Or, once, the kitchen of some poor bastard who had no idea what he was getting into. If you showed up, you showed up. I don’t think I ever played a show that didn’t involve adjusting to playing with someone I just met ten minutes before. That’s usually a recipe for an aural hurricane. But there would be times when Leonard on trumpet and myself on sax would hit brief moments of harmony that practically booted us out of our bodies and into the astral plane if just for a second. 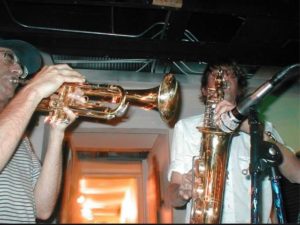 Leonard and myself funking it up at Super Happy Fun Land, 2004 or so.

Lisa Cameron, a former band mate of mine from Wonder Whip and Dizzy Luna and one of the people who recruited me into the Sac, was one of Leonard’s oldest friends. The two met in college. On Leonard, she had this to say:

“We used to listen to the 13th Floor Elevators and wonder how we could be a part of it, and it turned out we were both involved musically on numerous occasions with one or more of their members and extended family, and every time it was amazing and just as exciting as we had hoped. He practiced active lucid dreaming, and I would like to think that may have had something to do with it.”

Kurtis Machler, head honcho at Million Dollar Sound, current leader of Black Eyed Vermillion, long-standing member of Liquid Mice,  and for this evening, a piece of the mayhem that was The Liquid Sac. Unfortunately, Machler was very close with both Leonard and Izzy Cox. No, I take that back. He was VERY fortunate to be very close to both.

“This is a weird, sad harmonic convergence for me. Leonard and Izzy. Wait… What? I don’t know if they even knew each other. Did they? I was never with the two of them at the same time. I played music with both of them in some of the same rooms, had deep, ridiculous conversations and saw the sun come up in some of the same foreign places. We slept on floors and wandered around new towns.

“I’m writing this from a fishing pier 100 miles south of the first beach that I swam in with Leonard. We were on tour with Liquid Mice, from Austin to NYC and back down the east coast on a NEA grant. Touring with Leonard was like traveling with a human disco ball – everything gets reflected back in sparkling brilliance, in every corner and with unexpected flickers. Truck stops become psychedelic playgrounds, flat tires were a party waiting to happen and new cities were unpainted canvases.

“His love of music was infectious. I started playing with Liquid Mice just after my tenure with a popular Austin “white funk” outfit had come to an ugly end. Hooking up with the Mice was like rinsing with a cold glass of water after eating a piece of moldy bread. Leonard, Herman Garcia and Brooks Colman (the original members) took me in to their cool, experimental and complex/simple world and let me be me.

“Leonard’s trumpet seemed to play Leonard. All of the Mice were improvisational pimps, FACT, but Leonard was a shape-shifting time traveler. Musically, he went places that confounded and sometimes frustrated us. I loved it. That was how he lived his life. Later, I toured with Leonard again with Whiskey Rippers. We saw new cities and slept on new dirty floors. He was always up for the adventure. We swam together again in the Gulf of Mexico and met a hobo that bummed a sand dollar from us. True! If I was asked to come up with a favorite quote from Leonard, it would be his goofy shoulder shrug that I always interpreted as “here we are, what’s next?”

Alma Lee Cameron, who graced the stage at the tribute as a solo act (with the help of author Laura Creedle and ST-37’s Bob Bechtol), was in an eclectic band with Leonard called Subtropix. Lisa Cameron, Terry Wooten and Brian Mullin rounded out this band that played everything from garage to new wave, from the blues to reggea.

“Leonard was a seeker. He possessed a deep curiosity about the metaphysical, in an authentic and unassuming way. Leonard was less interested in image than just about anybody I know. Leonard was also one of the kindest people I’ve known. He was pretty much my oldest friend. We supported each other with fondness over many decades.”

Anne Heller, the brains behind Aurora Plastics Company and the Yeast by Sweet Beast noise fest that takes place around SXSW every year, has had her finger on the pulse of the experimental scene for decades. She knew Leonard as well or better than many.

” I first met Leonard in 1995 when Liquid Mice played a gig at some art space downtown on 5th St. with my experimental band at the time Monster Demolisher (or maybe it was called Starcrunch at that time), basically the precursor to Aurora Plastics Company (a 22 year long and running experimental improv noise collective with a revolving cast of characters).

“I was in awe of this crazy collective Liquid Mice, having just moved from NYC where I was interning at the Knitting Factory Works record label. I felt honored to play on a bill with these local legends.

“Through the years, I saw Liquid Mice and their offshoot projects perform. I included Leonard’s projects in many shows I booked on the regular, especially in my 19 year and running experimental and outsider music fest Yeast by Sweet Beast. For the past decade or more, I would make a point to approach Leonard directly every year to ask him which of his current projects would like to play my Fest.

“Leonard was one of the only people who consistently make a point to talk to me after my ex-husband left me and slandered my name all over the Film and Music communities in this town. I am so thankful for Leonard’s kindness during that terribly dark and lonely part of my life. He and his beautiful Nubian princess of a girlfriend Dana Williams (rest in peace, my friend) were always at the old Chain Drive for my music shows or my yearly Yeast by Sweet Beast Fests. Dana was always videotaping experimental shows, some of which I played, and I am thankful for her archives and friendship. I am slow and lackadaisical with sharing my own video music archives, but she covered a lot for me.

“Leonard and Dana made such a beautiful couple, both the sweetest people in the world, and there is no doubt that Dana was a very important part of Leonard’s life. Leonard told me in November 2017 while we waited to re-up our HAAM health insurance that the day before his band Abigail und Hansel was to play a gig with my current rock project Line of Fire was Dana’s death day.

“Dana would approve,” I said. “It’s been 4 years and I think about her every day,” Leonard replied with a far-off stare.

“Leonard was a very beautiful soul. His electric jug skills were impeccable, his coronet so cute, small and funny but so expressive, the whimsical qualities of his musical contributions brought levity and positivity to any project in which he played. I miss him so much and continue to look for his stately long gray hair and gentle glasses-rimmed eyes at shows I attend.

Although my first piece for this mag was a review of Harry J. Anslinger, another improv noise collective I was part of and also included some of the folks present at the tribute, I don’t feel it’s appropriate anymore to review a show I played.

So instead, I give you the show in it’s entirety.

All video courtesy of Anne Heller.

Thank you to everyone who played and came out to celebrate the life Leonard Smith.

Thank you Lisa Cameron, Alma Lee Cameron, Kurtis Machler and Anne Heller for the beautiful words and sharing your memories.

Leonard, my brother, see you next time around.