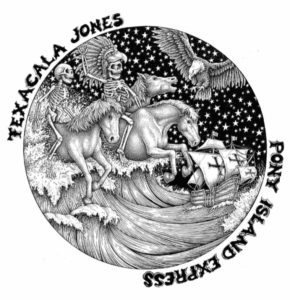 Alongside the tragic, tortured genius Jeffrey Lee Pierce, the brilliant in her own right Texacala Jones forced the traditional American music that gave birth to rock and roll down the throats of the angry punks so ready to tear it down. ‘Yes, that arena bullshit sucks’, said the pair. So listen to these records. They didn’t really know how to play at first either, those blues and backwoods country boys. And they were oppressed by The Man just like you. Now listen to these here grandpas and do like they do. Keep it simple, stupid, and the message will present itself.’

Forty (Jesus!) some odd years later, Texacala Jones is still preaching that gospel with a new yet seasoned group of *ahem* youngsters backing her up. The rhythm section (so kindly on loan from We Are the Asteroid) of Nathan Calhoun and Frank Garymartin lay down solid, driving country/rock beat and walking basslines that showcase the seasoned but no less sultry caterwaul and yowl of Texacala and the alternately crunchy and jangly guitar of Chelsea Taylor.

Despite consisting of a gaggle of inveterate punks and noisemongers, the passage of time has lent an air of dare I say sensitivity to the blessed perpetrators of this record.

“Listen For Your Car” is the most haunting song on the record, an obvious homage to the Gun Club’s low-swinging Blues – complete with an hymnal organ part that would make Al Green weep.

Lest you think she’s gone soft, the song immediately following “Listen” is a blistering rave-up courtesy of 45 Grave and the Flesheaters and features Tex at her most fearsome as well as the most bombastic garage guitar lead I’ve heard this side of a Lords of Altamont record recently. “Fridgette Bardot” is only one of any number of songs on this Record that would make a good single or round out a scene in a cult movie.

Both a pioneer and a veteran, Texacala Jones makes it clear she ain’t goin’ nowhere with Pony Island Express.

This entry was posted in LP/EP/Single. Bookmark the permalink.