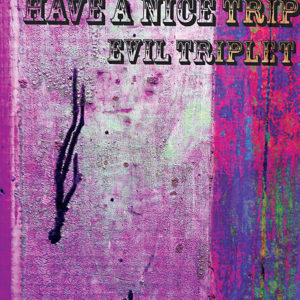 Austin psychedelic veterans Steve Marsh, Joe Volpi and Kirk Laktas have recorded and released one of the heaviest, headiest records to come out of Austin in 2018, if not the decade.

At their core, each song is a rocker backed by meandering yet solid basslines and off-beat but driving percussion parts. Piled on top of each song are synth and keyboard parts that evoke the astral plane and the darkest bits of the cosmos that contain all the mysteries of the void but only revealed in bits and pieces that tiny human minds can barely comprehend.

The just shy of 4 minute “Space Kitten” kicks off the album, firmly establishing the listener’s place on the space liner that for the next 45 minutes will cruise nebulae and the darkest parts of the psyche. “Aren’t you Experienced” is a playful yet reverent homage to the Jimi Hendrix tune of a similar name, while “Open Heart” is a resurrected Miracle Room (Marsh’s 80s industrial/art rock collective from a former era) tune given new life by the rhythm section of Laktas and Volpi.

OMG WTF BBQ, All Monsters Attack and Sabbath Crow: watch your backs. There’s a new trio in town and they’re not screwing around.