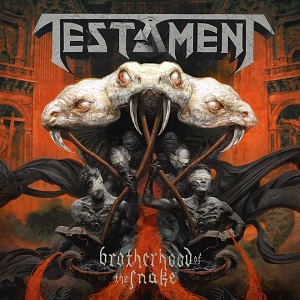 Testament – Brotherhood of The Serpent Review

Testament is one of the best thrash bands to survive the 80’s to the present day. The vocals, lyrics, and instrumental compositions have earned them fans worldwide. Many consider them as a band who should be included in the Big 4 and some say they are part of the Big 8. This is their third LP since reforming and releasing new music. I feel out of all the major players in the 80’s thrash scene Testament have probably put out some of the best and most consistent records among their peers in the last 10 years. A lot of my favorite 80’s thrash bands simply don’t exist or are a shadow of their former selves. I feel Testament are masters of blending different sounds they have made over the many years of their existence together. Their mixture of 80’s thrash and death metal is an always welcomed sound for many listeners and something that you don’t hear a lot of anymore.

Testament keep their track record of putting out some of the best albums out of all their peers going. I enjoy most of their discography and this album is no different. Since they have started putting albums out regularly again they are always on my year end list. They were one of the best thrash bands in the 80’s and they are still one of the best playing that style today. While a lot of their peers put out watered down versions of what they used to be Testament is still tweaking and pushing their sound to different extremes. Their song compositions take a lot of twists and turns and they incorporate multiple styles of metal to back up Chuck Billy’s iconic vocals. Testament is one of those bands from yesteryear that you are glad still keeps pumping out the jams instead of hanging up their instruments and they prove that every album they release.