My first trip to PUNK ROCK BOWLING in Vegas.  I am no stranger to festivals, though I try to avoid them if at all possible…mainly becuz they seem to have just gotten bigger and bigger and bigger. Anyway, after hearing my friends the SVETLANAS were gonna be part of the bill, I threw caution into the wind. As one can see by the band list above, the OTHER bands playing made the decision alot easier.

So let’s get straight to it…flew in on a Friday morning…get settled into my hotel just off of Freemont St… and then head on over to EVEL PIE to meet up with the Svetlanas. It was already packed in the back patio. 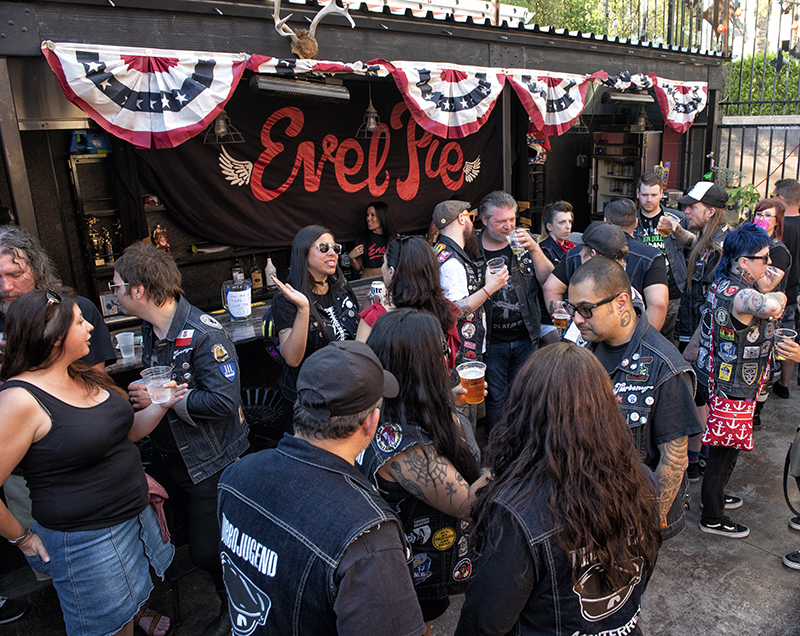 My buddy Phil Bronco’s band Flexx Bronco was also gonna be playing as part of the Turbojugend day party.  Phil’s a Food King by day, Rock Star and AirBnB entepreneur  by night. Of course I was packing my POLAROID(S) in addition to film/DSLR. 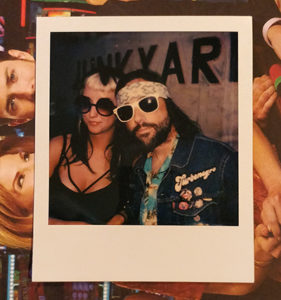 As it turns out the Svetlanas had been inside waiting on some slices while I was raising havoc on the patio.  Once they grabbed their slices, my “let’s go out back” (where it was much COOLER) didn’t translate, so after some relocating more towards the front doors it was time to say HELLO.

The last time I had hung with the Svetlanas was in NYC when they played Bowery Electric back in October on their ill-fated tour thanks to some nazis. I brought Gibby’s bullhorn to that gig in case it was needed for such things…but alas good times were had by all. 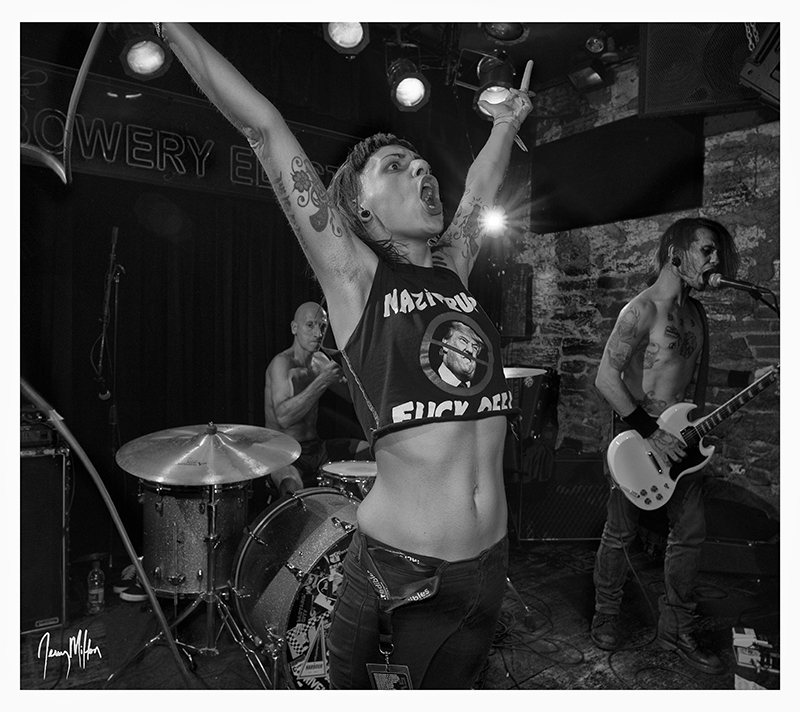 After catching up while Lemmy was pumping at 11 on the jukebox….socks were exchanged (doesn’t every one do that?)… just about then Angelo Moore from FISHBONE popped up as they had a gig down the block later that night. 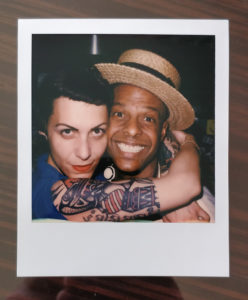 As is the case in my hometown of Austin along Red River, Freemont St is loaded with Music Clubs, such the perfect place for after festival “Club Shows”. Speaking of which, after the Svetlanas took in some carbs, we headed off to a club down the road a piece.  Where or why I didn’t know, but soon figured out we were headed to The Dwarves sound check. Or so we thought, haha. We were greated by “He Who Cannot Be Named” but the rest of the Dwarves were not on site yet….so it turns out we did get to see the soundcheck for THE BRONX. 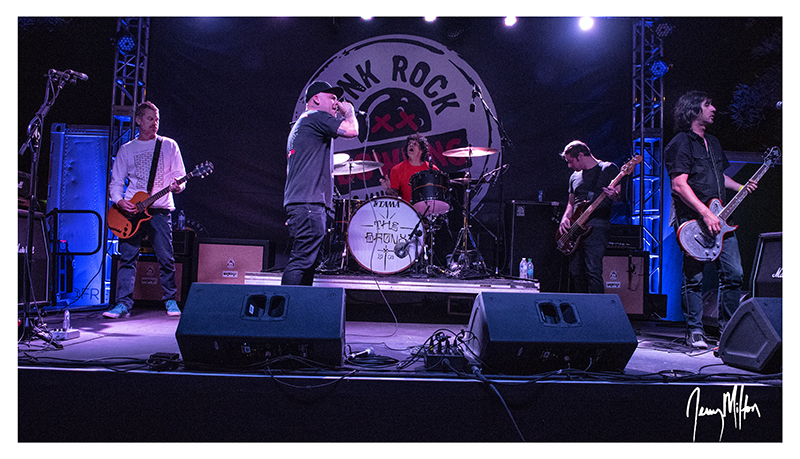 Just before THE SHINE was about to hit the stage, the Svetlanas frequent Southern California buddy Nick Oliveri was holding court.  Olga and Nick, the dynamic duo. 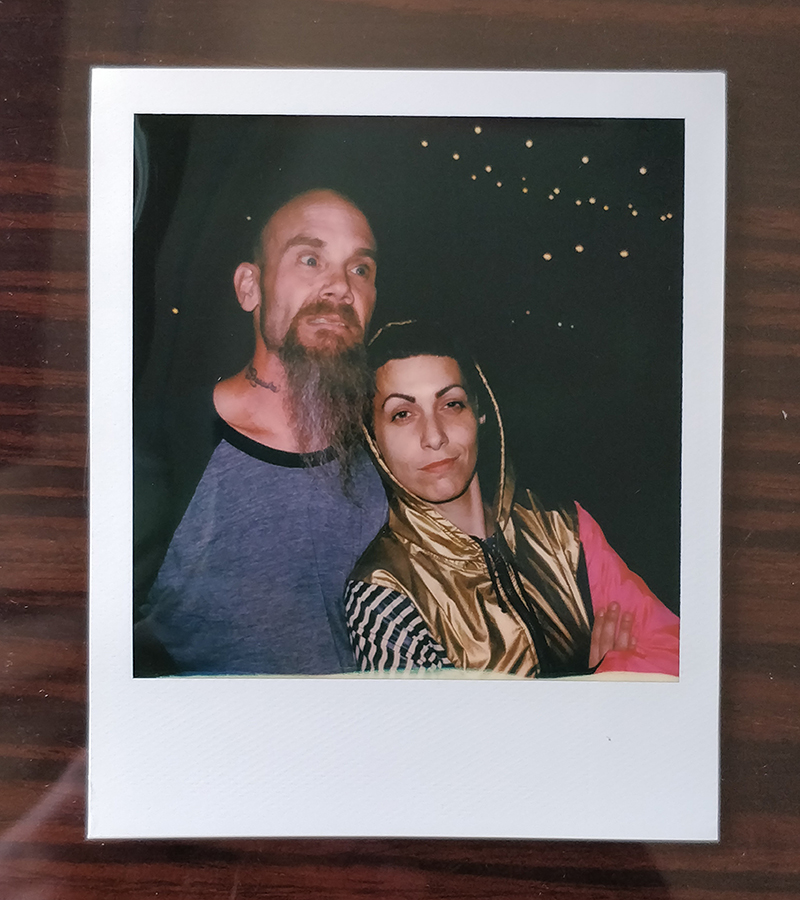 Much of the time I’m not sure what the Svetlanas are talking about as they chat back and forth in Italian….but I did figure out they were headed off to another show down the block…and would TRY to be back for the The Dwarves. I wasn’t going anywhere, so I proceeded to get ready for THE SHRINE. There was the typical “photo pit” in front of the stage, but PUNK ROCK BOWLING has not yet given out credentials and since I was on foreign land…I decided to shoot the show from the crowd, which no doubt would mean dealing with stage diving. oh joy!

As is frequently the case in my old age, I was not familiar with THE SHRINE, but holy hell once they hit the stage I was digging it. Fu Manchu on steroids. Josh Landau on Stratocaster tearing it up.

By the time they played DESTROYERS the venue was on FULL TILT.  Hell of a set !! Can’t wait til they come thru Austin next… 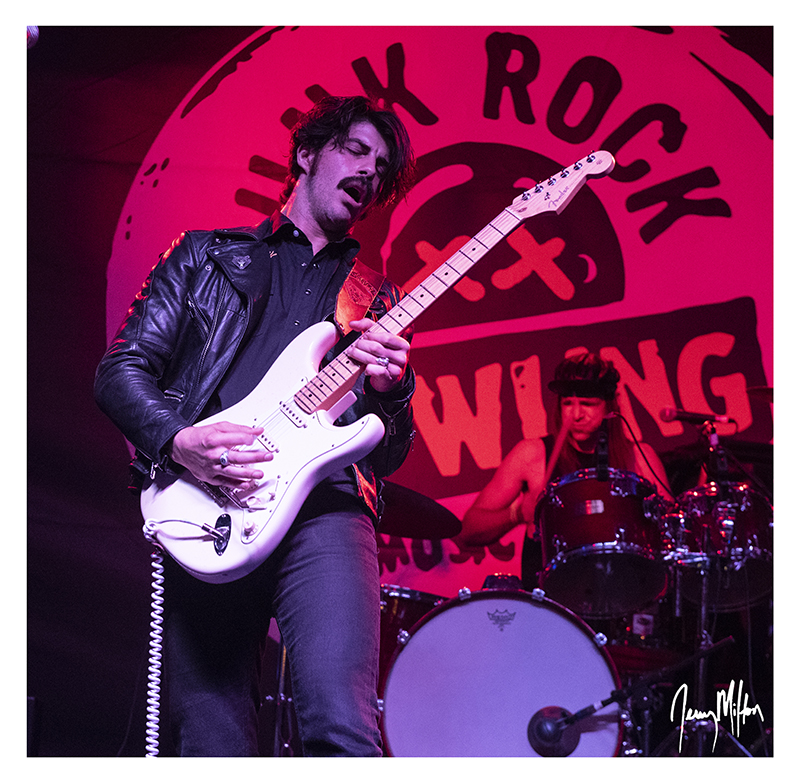 I’ll throw in right here that we are SPOILED by FOOD TRUCKS in Austin cuz the 2 they had on site for this night…NO BUENO. Anyway, after The Shrine lit the place on fire it was time for THE DWARVES in all their GLORY. 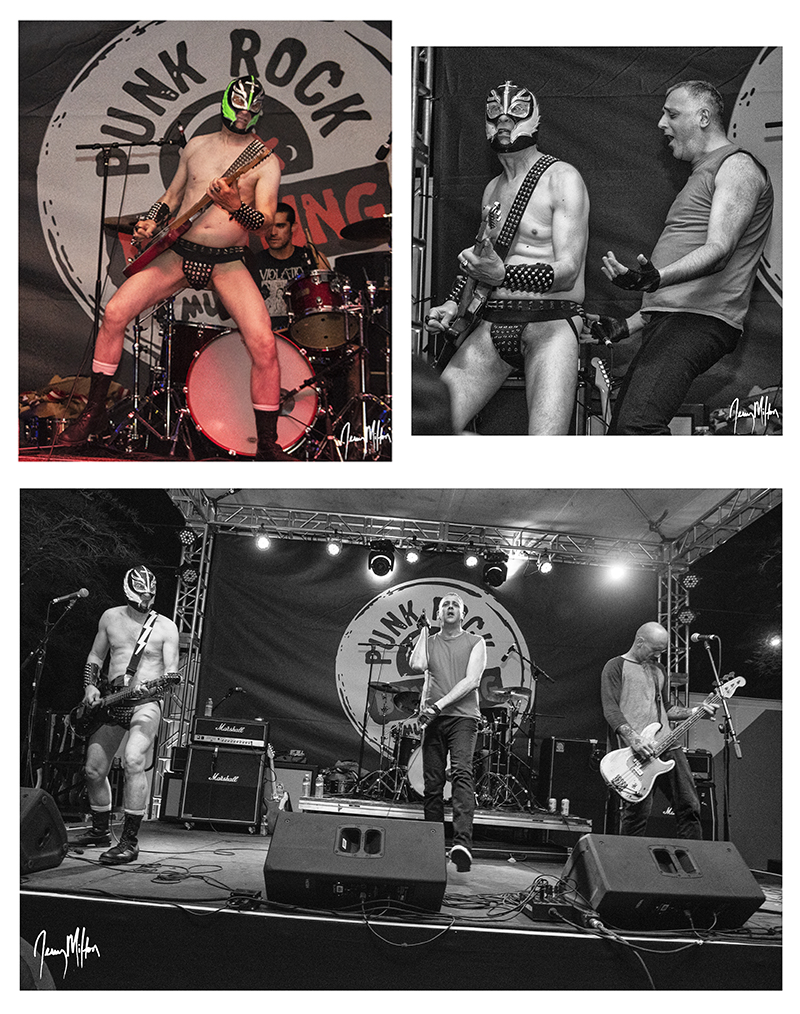 About 5 songs in…some stage diver caught my camera just right and a button protrucing out of the flash took out my temple, haha. Blood ensued. Good Times !! And with that I headed back to rest up for Day 1 of the actual Festival. Well I stopped by EVEL PIZZA on the way, that is a given.

What I absolutely LOVE about this festival is that it doesn’t start til 3PM….it’s fucking genius. So I made sure to get there by the time D.O.A. hit the stage, which was set for just before 5…so this gave me PLENTY of time to check out the venue.  Though the sun was beating down…with the buildings, there is plenty of SHADE and walking from the BACK of the festival to front is like a 2 minute process TOPS. Unlike ACL or even FunFunFun where that was a 15 minute proposition.

Anyway back to D.O.A….so after briefly wondering around and getting my bearings…I also was on the lookout for the Svetlanas, as we had traded text earlier about meeting up. But before that panned out, it was time to enter the photo pit….and right away I notice Joey “Shithead” is sporting a SVETLANAS T-shirt, haha. Oh wait, so is the drummer.  Hmmm. 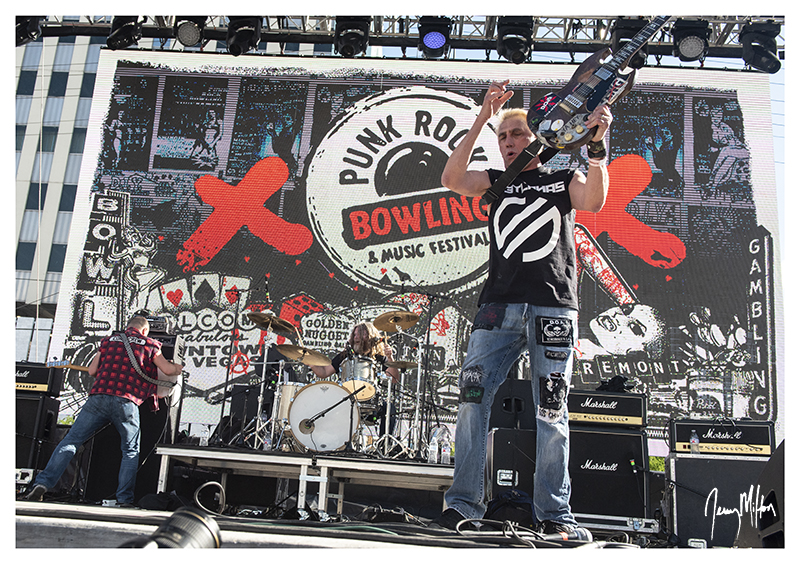 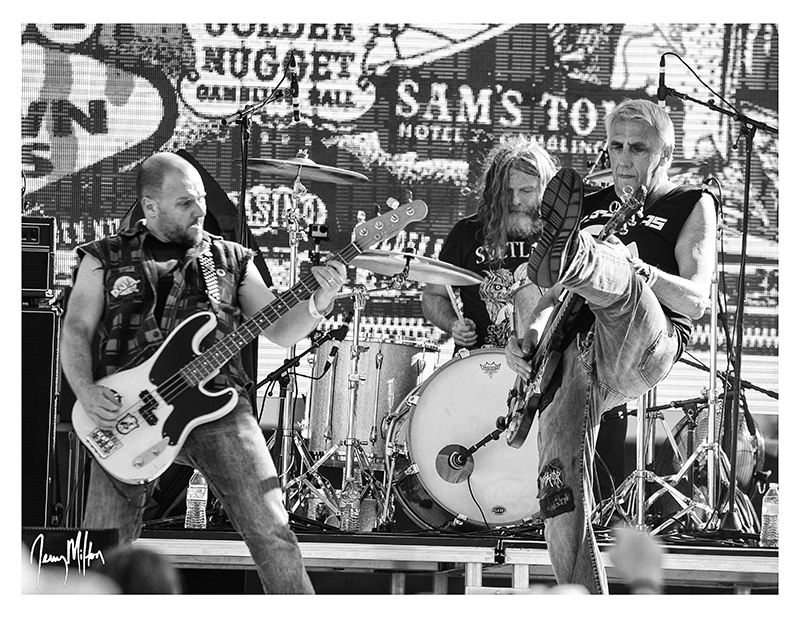 Half way thru the D.O.A. set I ran into the SVETLANAS hanging stage left. I did shoot some other bands the next few hours…but mainly was in chill mode. The Suicidal Tendencies had an autograph session, so naturally we headed that way.  Ran into Joey “Shithead” right about then too. 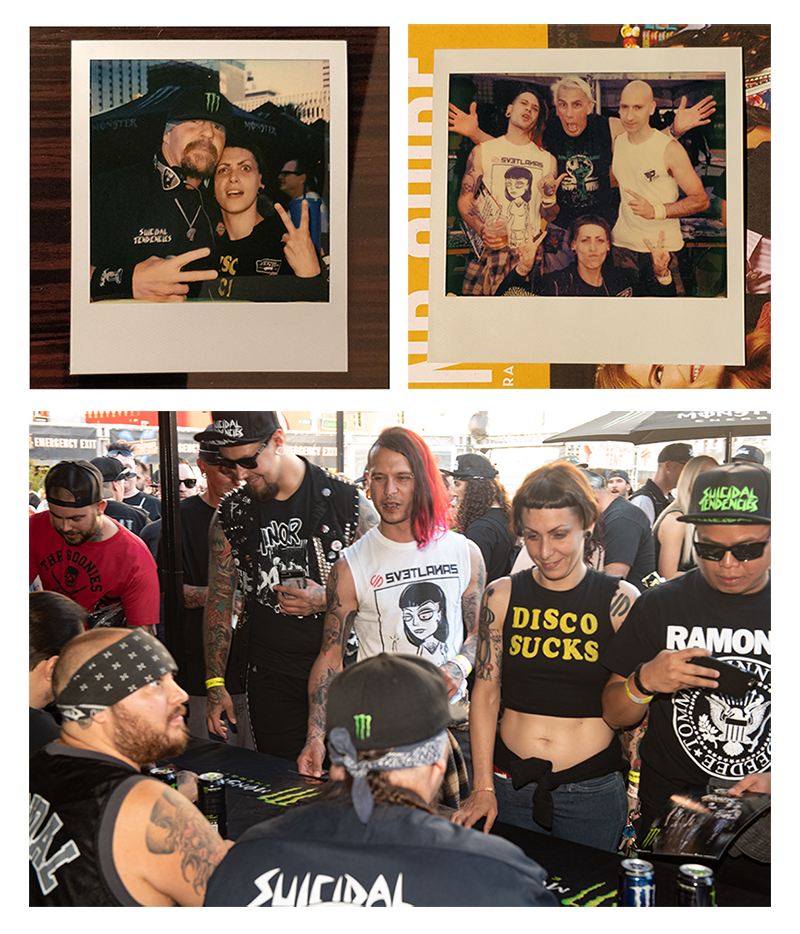 L7 was also doing an autograph session over in the Dr. Marten’s tent…got a chance to briefly talk about my pics from 1991ish being used in their documentary. Too Cool. 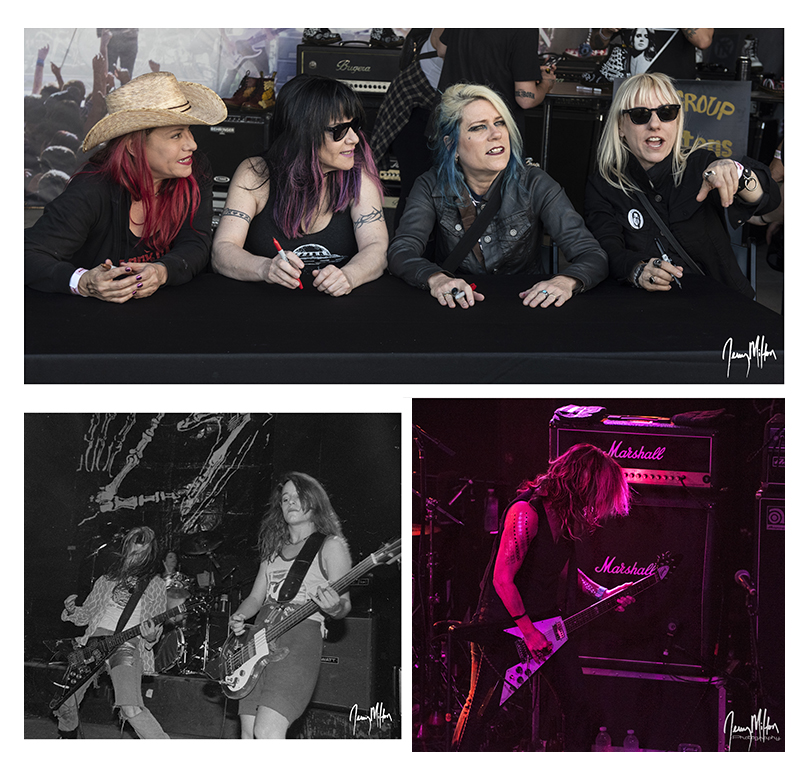 The rest of the night was a bit of a blur. Pizza….tired legs…HOTEL. Followed by the pool first thing in the morning. which means like 11 AM, haha. As for Freemont St that time of day….it looks about like below, haha.  No moving sidewalks….hot baking tile and I’m okay with that. 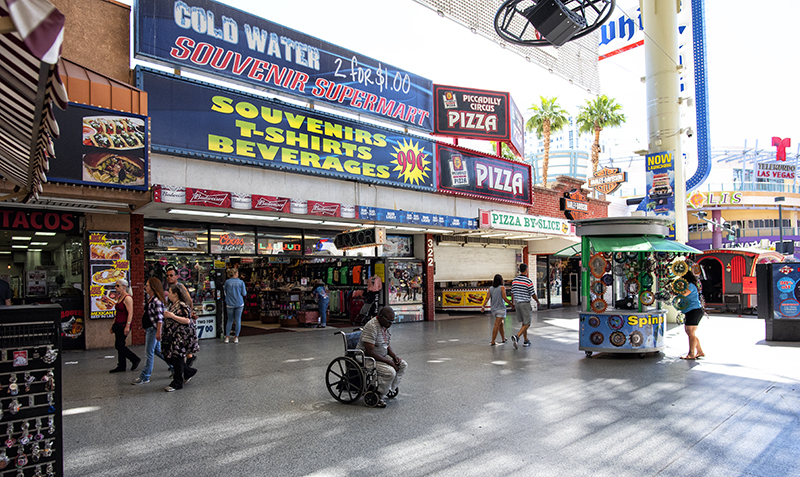 The following day was TURBO NEGRO day and quite frankly no other band mattered, haha. Turbojugends had been waiting for DAYS for them to hit the stage. I’ve gotten to see them a few times over the years.  One of my fav shows was them closing FunFunFun one night. 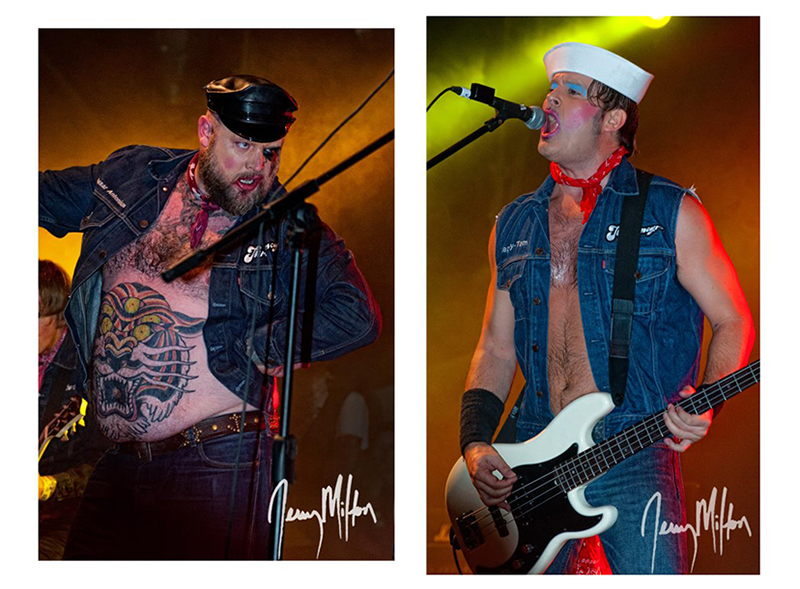 While they weren’t due to hit the stage til 7:30…this being SUMMER, that meant it was still gonna be in the throws of bright afternoon sun. Quite a different way to take them in rather than closing out a 13 hour day on Town Lake in Austin. 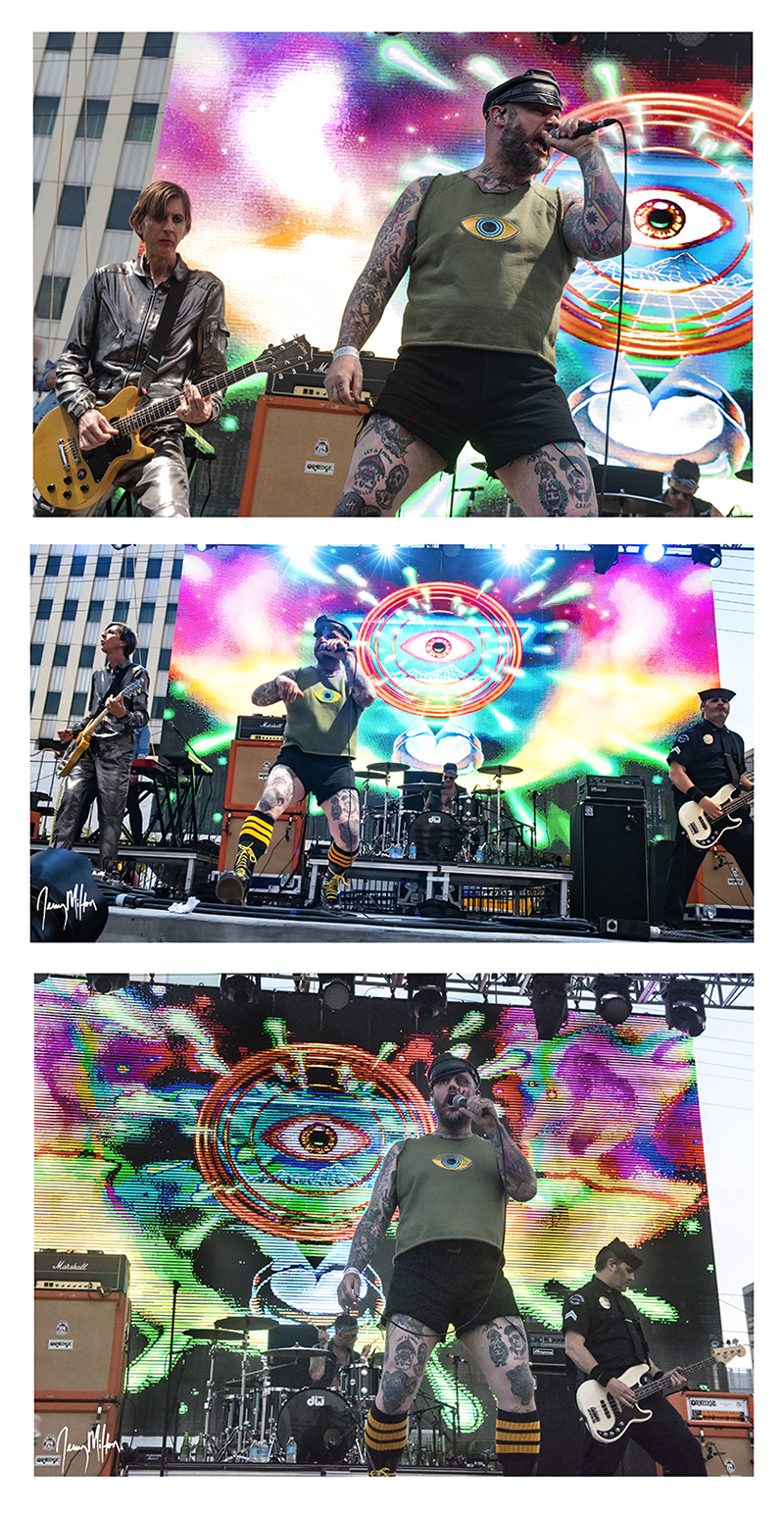 Some OTHER DRAMA made the news from this night on a NATIONAL level, but the night was already over by then in my book. It was time to rest up for the SVETLANAS on Monday as they were the first band to go on at 3PM.  I made it in time by the skin of my teeth. For the VERY FIRST band of the day… there was a good size crowd waiting for them to hit the stage.  Heck it was a big enough that a mini-pit formed mid set thru. Impressive with the sun beating down like a sledge hammer. Speaking of which….meet OLGA. 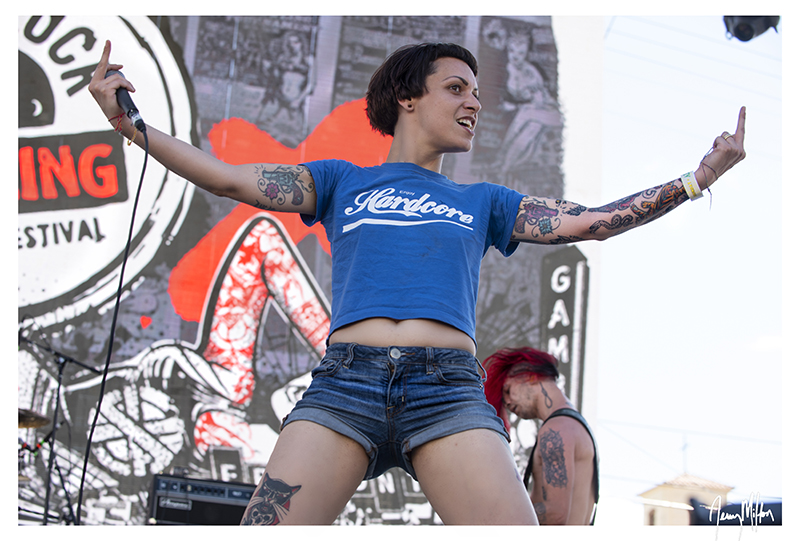 It was interesting to take in the Svetlanas on a big stage.  Having seen them in smaller venues prior. Olga all over the dance floor. Though I realize they did that huge US tour years prior…I wanna say Van’s ? So yeah,  where as some bands that are pretty exciting in small venues don’t translate to vast real estate….make no mistake, Olga and JJ and the rest of the band ate the stage up from stage left to right.

The Svetlanas did have a new demo of their upcoming album on hand if memory serves right. Of course I hung around for X, though I’ve seen them a couple of times recently in Austin. The next day my flight wasn’t headed out til well past 9PM so I went over to EVEL PIE to get a cool Budweiser type shirt…and as I walk in I think to myself….I know that mohawk…as I spy JJ’s mug from the back. And sure as shit the Svetlanas were getting a last slice before heading back to LA to catch flight back to Milan and a fairly busy Summer tour schedule that immediately followed their return.  Diste did mention their hope that an October tour of the US materializes. The have multipe tour dates in Germany, the UK, France,  even Spain thru the end of August…so check them out if you are in those locales. Full schedule HERE

And lastly, word on the street is that EVEL PIE will be opening up an Austin location….hope so, hope so. See ya next year at PBR kiddos. 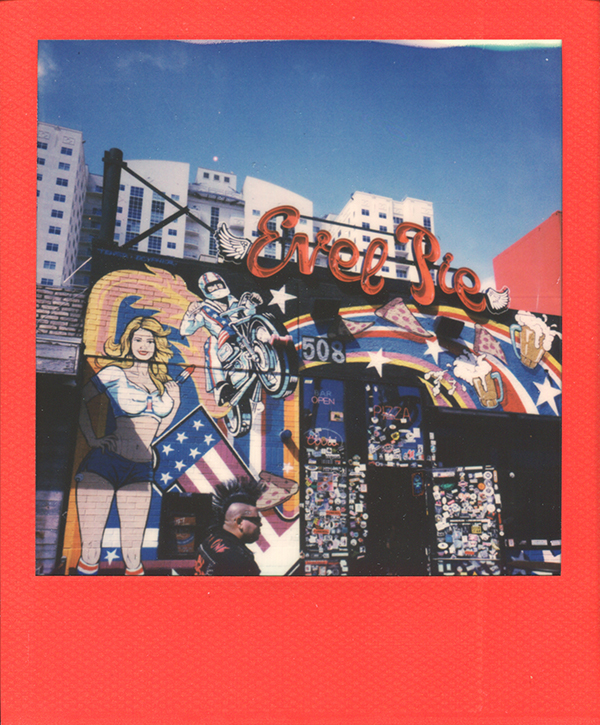