One of my favorite moments in music occurs at the 2:30 mark of Indians. The breakdown, the cry of War Dance, the subsequent ten seconds of pure thrashing groove… those twenty or so seconds are the perfect, and one of my earliest, examples of what metal music is for me. It’s a building of something, a force that you feel swelling within you, compounding to the breaking point, where the experience of it all becomes bigger than you and you have no choice but to give into the overwhelming power and headbang it out.

What has been left unsaid about Anthrax? Far more eloquent writers than I have done fantastic pieces on the prowess and legacy of the Big 4 heavyweight. I can only write of my own experience, and it would be far too easy for me to wax sentimental about Anthrax. They were my bridge to punk (a genre I struggled to embrace, but found common ground in through Anthrax’s influences), and they were the band in the Big 4 that I considered to be an outlier, for all the very best reasons.

I was recently gifted the opportunity to interview Charlie Benante: drummer, musical catalyst, archivist, contributing artist, etc. for Anthrax. Special thanks to Charlie, and his team for accommodating our interview request and so graciously setting aside time to chat. 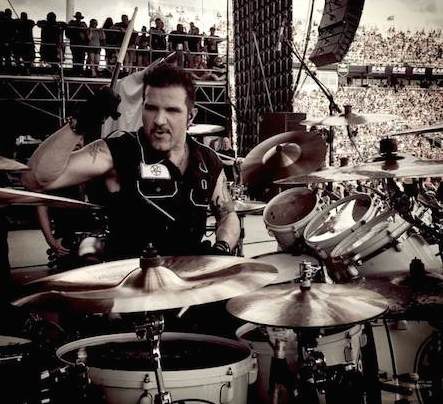 VH: Anthrax is currently on tour with Slayer, Testament, Behemoth, and Lamb of God. That is a powerhouse of a lineup! With this being Slayer’s final tour, how are the shows? Does there seem to be a “leave it all on the floor” mentality from the fans?

CB: The first part of this is really to say that we are all just one big traveling kind of family. Every day I see everybody, and we get to hang out. We’ll go do this, or that. And then we get to go play the shows. The great part about the shows is that people are really coming out to see this. Yeah, this is Slayer’s final run, but I just think this package is so special. It has so much quality to it.

VH: Definitely! This is a package where every single band on it can headline their own tour.

CB: Exactly. I think the crowds are really coming out to be a part of it all.

VH: Anthrax recently released the live DVD Kings Among Scotland in April. Part 2 of that set is Among the Living in it’s entirety, which you don’t play live too often. Why did you choose to include that on this DVD?

CB: We’ve played it just a handful of times. We knew we were going to play the album on this tour, and we knew we wanted to document it. So, we decided to document it in a place that is special to us and where we knew the show would be great. One of the first places that really embraced us and showed us a lot of love was Scotland. We wanted to go back to that place, The Barrowlands, because it has a vibe to it. We wanted to do it there to really capture it. I can’t put enough emphasis on how strongly we felt about documenting it there.

VH: Obviously, Anthrax is recognized as a true pioneer in thrash and metal in general. Looking back at the past 30+ years of your career, what are you most proud of?  What would like future generations to take from your contributions?

CB: I think I’m most proud of the fact that I got the chance to really do this and make a name for myself. I was just a kid out of the Bronx, and this is really all I ever wanted to do. It was either going to be music or art. This has given me the chance to do both, as a matter of fact! I’m happy with being able to set that goal, and then really being able to achieve the goal. 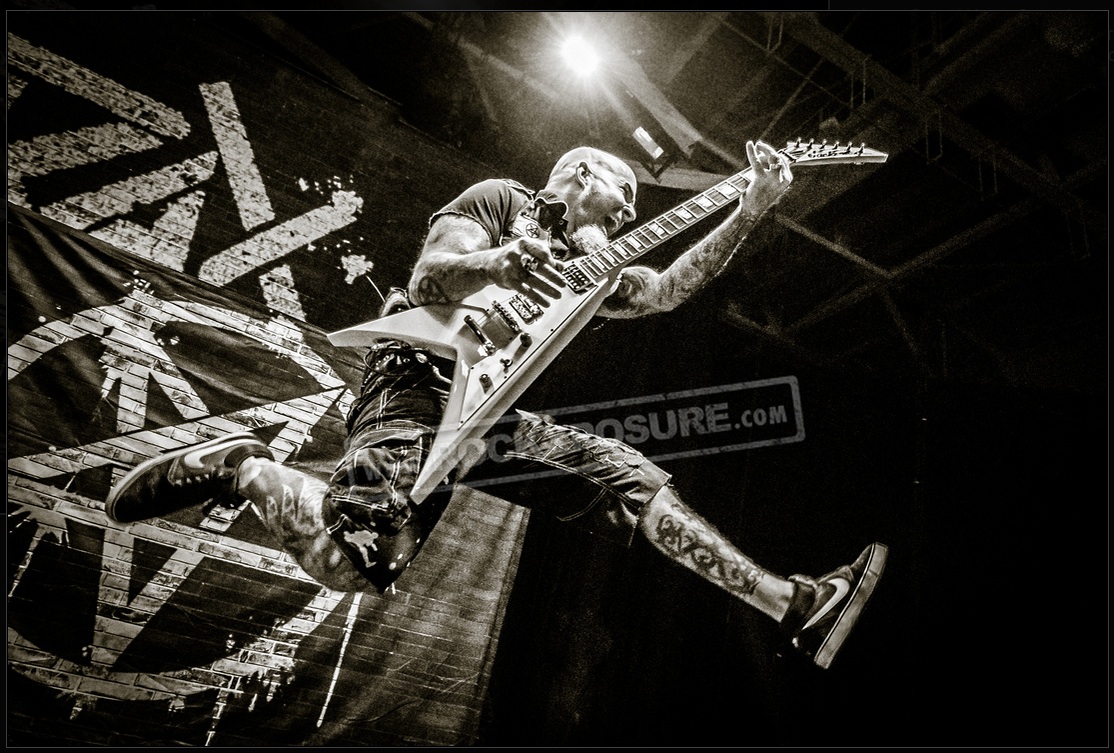 VH: Absolutely. So, what do you consider your legacy to be? Obviously you have a different perspective at this stage of your career.

CB: I would definitely want people to look back and recognize that we took chances, musically speaking. We weren’t your traditional heavy metal band. We played heavy music, but we also took a chance here and there. We tried our hand in this or that. We didn’t look like every other heavy metal band at the time. I think we were a big factor in bands coming out after us who wore shorts, and just did something other than the black leather and spikes, and such. We pushed it to a different area.

VH: You absolutely changed the game for what it meant or could mean for future bands to play heavy music, but still do it in their own way. Changing gears a bit, I want to touch a bit on your role musically within Anthrax. You are the catalyst for many, maybe most Anthrax songs. You sit down and do a lot of the riff writing. You really laid the ground work for your most recent album with the downtime you had while recovering from surgery. Knowing that you do write the riffs we hear, I want to ask you about a rumor I’d heard but have never had confirmed. Stomp is a great Anthrax record, and I’ve heard that you played the guitar solos on that record – any truth to that? Have you played guitar on any of the records?

CB: I mean, I played some of them on the Stomp 442 record. I’ve played some guitar on nearly every record going all the way back to Persistence of Time. The later records, I’ve played a bit more. I’ll do a lot of acoustic, or texture work. Sometimes, I’ll do the lead. But, when you’ve got a guy like John in the band… I mean, I can’t play nearly as well as John can! So, now, if I hear something in a song, I’ll hop in and try it out.

VH: As the “official unofficial” archivist for the band, you have amassed a pretty impressive collection of nearly everything the band has done. How did that start? Did you have the intention of chronicling your legacy from the get go?

CB: I’ve always been the type of person who collects things. Whether it be toy collecting, or saving magazines. When I was younger, my mom got me a subscription to Famous Monsters magazine, and I just saved everything. So, with the band it was just something that was very normal for me – to get two of everything and just stow them away. I mean, I don’t have one of absolutely everything. I missed out on certain things, especially things from different countries, but yeah, I have a lot. I like to try and have one of everything.

VH: I am blown away by that. I would hope that you have that available on display one day for fans to experience. Just make it an exhibit or walking history of memorabilia – people would pay to see that collection!

VH: Do you have an item in that collection that stands out as a favorite or that holds significant sentimental value?

CB: Oh, wow! That is so hard to choose. My hard drive in my head is just completely going crazy right now trying to think of just one piece! Yeah, I couldn’t even choose, haha.

VH: No worries, that’s fair! So, when you aren’t writing music, touring, or roasting delicious coffee, you are often creating art through a number of mediums. Over the years you have contributed pieces to Disney, Creature From the Living, and more. How has your relationship and interest in this type of art evolved over the years to today?

CB: Well, I take it much more seriously now that I’ve started to do a lot of the designing for the band. My collaboration with my friend Kenichi, from Osaka, his company that we work together with, he will either call or text me and explain the idea he has for a shirt, or some other piece. And we’ll collaborate and say yeah, I can do this or that. If I can’t do it, then we have our guy, Stephen Thompson, who works with me on a lot of the Anthrax art nowadays. He’s an awesome artist! I like to have a few people involved that I can go to and we can pass projects around like that.

VH: I read that you want to do a graphic novel based on the covers of Worship Music and For All Kings. That there is a possible storyline with those two album covers. Can you elaborate on that?

CB: The storyline there takes place in a world that is not of this world. It’s in a time and place where music once existed, but it doesn’t exist anymore. It’s been banned by this other force… I don’t want to use Apple or tech as anything, but there is a rebellion and you can access music via an underground. The idea I had was you could only access music a certain way. The days of of just going out and getting it are gone.

VH: You’ve witnessed first-hand this renaissance of metal that has come around the past few years. It is incredible to see bands like Exhorder, Carcass, even Coroner is set to record again and tour this year, experience a resurgence in music and touring. Are there any bands you would like to see come back out that this generation should be exposed to and support?

CB: I still have a fondness for certain bands that have since broken up. Some members have died… I was always looking forward to Husker Du announce a show, or string of shows. Since they lost their drummer, Grant Hart, I don’t think that will happen. I would like to see maybe the original lineup of Sepultura do something, if they could get together and put their differences aside. I would like to see one of my favorite bands Jellyfish get back together, but… I don’t know, there’s reasons for them not to. As a fan, I would love to see that.

VH: What about SOD? Any chance of seeing you guys play some dates?

CB: *Laughing* I have no clue! I never say never…

VH: Last question! I always love to hear from artists what drove them to music. When did you know music was it for you? Was there an album, concert, artist, etc. that you recall leaving an indelible mark on you?

CB: I was always into music as a kid. The Beatles, The Stones, Led Zeppelin, and then the Sex Pistols, Black Sabbath… that was the soundtrack to my life, really. KISS basically gave me the push to go and really pursue it. At 14, I was in bands. It was what I wanted to do. Even Iron Maiden… that was around high school for me. For me, those bands were just the pushes that kept coming and sold me. I knew I had to do this.

Thank you to Charlie Benante. Catch Anthrax playing with Slayer, Behemoth, Testament, and Lamb of God in Austin on Wednesday, June 20th, at Austin360 Amphitheater. 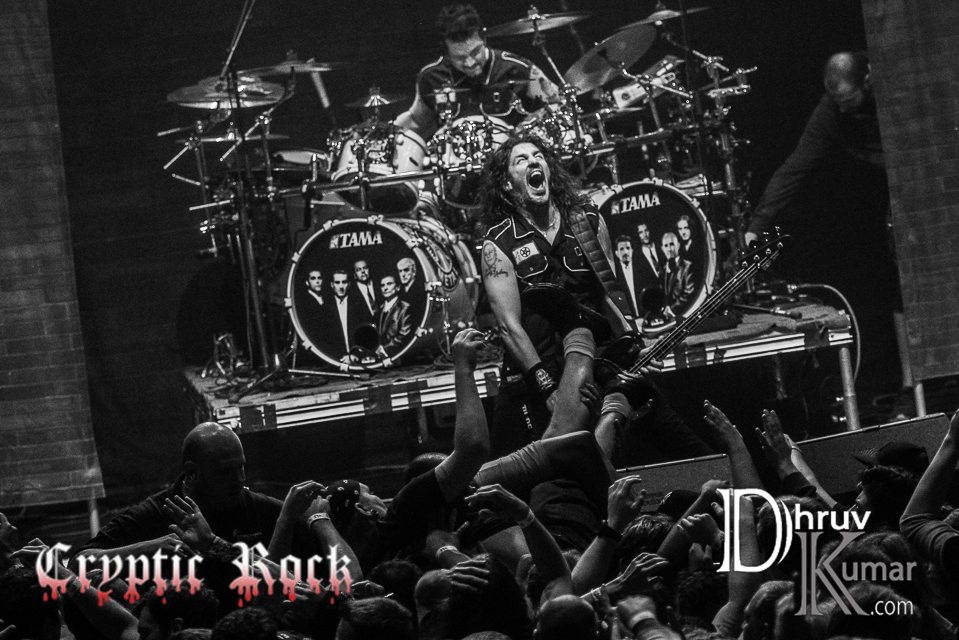