Posted on February 4, 2020 by Nicolette Mallow 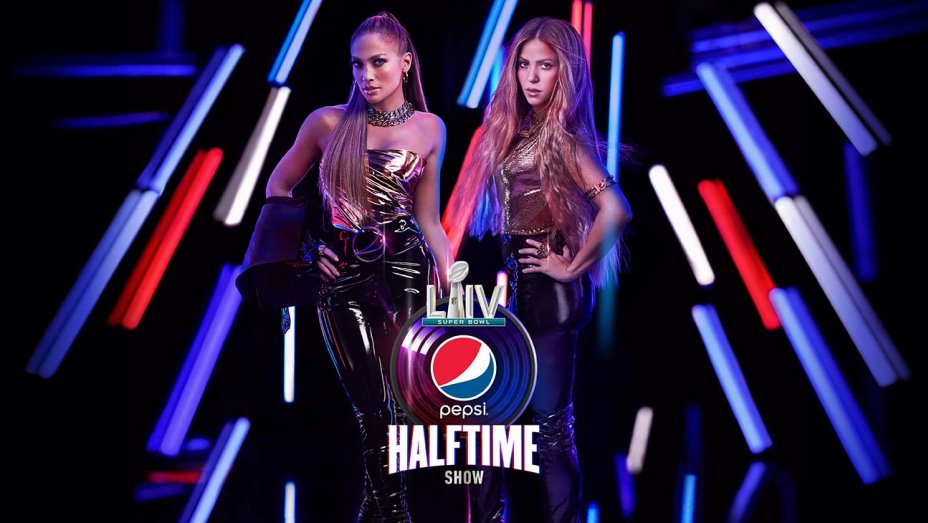 Feb. 3, 2020 –Shakira and Jennifer Lopez were hotter than the summer heat in Vegas at The NFL’s Super Bowl LIV Halftime show. The two Latinas made headlines today with their saucy, sexy and salacious performance at Super Bowl LIV in Miami, Florida. Normally, I would not pick two pop stars to write about in a punk, metal, rock n roll zine like Rank & Revue – but our Editor is a huge football fan – and I’m a Latina, Lebanese girl and an artist that’s a huge fan of these two ladies. For decades, I’ve been following Shakira and J.Lo’s careers and mimicking their moves when I dance. I was addicted to watching Jennifer Lopez’s music videos before school in 8th grade. [I also danced to Michael Jackson, Lauryn Hill and Ace of Base in the mornings.]

At the end of the show, I really smiled from the heart when Shakira was in gold and J.Lo was wearing silver and they were holding hands, uplifting and complimenting each other, looking incredibly happy and vivacious. Clearly living out their dreams to the fullest. Silver and gold were colors of royalty, and I liked the way the girls ended the show together, hand in hand, rather than looking like a subtle competition for time and publicity. Each woman had their unique time to shine and relive the classic songs that made them famous. They showcased their unique dance styles. Then, the two sort of passed the baton onto a younger generation as Jennifer Lopez’s daughter, Emme Maribel Muñiz, sang at the end whilst her mother danced and Shakira played the drums. There was a wide range of ages and generations performing on stage, which also made me happy: to see beauty thriving at any age and how all women can be beautiful and powerful, especially in numbers, no matter your age. [Beyonce does a good job of showcasing black girl magic when she performs in masses, too!] So often, society is so shallow and we idolize the youth like Greek gods and demonize women past a certain age. Seeing these women excelling and rocking it at ages 43 and 50 gives hope to all ladies that we aren’t just getting older, we’re getting better and stronger with age, like scotch. Although I doubt either of these women imbibe alcohol with abs like that. Dios mio!

Most of the coverage has been positive, but there has been quite the uproar amongst viewers and alike regarding their provocative dancing and clothing. First, some of those NFL cheerleaders are wearing uniforms with a lot less coverage and a lot more makeup than what Shakira and J.Lo had on. And I’ve seen some of the cheerleader’s dance routines, which can be pretty risqué, even at college games. Truly, I don’t know why anyone that’s seen an NFL game is shocked by what they saw at Super Bowl 2020. Do you have to like it? No. But please don’t act surprised that sexuality has made its way into men’s professional football. We aren’t at church. Plus, male artists have performed shirtless at the Super Bowl, so, why the inequality and scrutiny towards female artists? Secondly, the NFL asked two Latina entertainers to perform the show. They didn’t ask a balloon artist, a magician or a group of older jazz players in suits. They asked Shakira and Jennifer Lopez to perform. And these two ladies brought the live entertainment.

At our best, Latinas are a passionate, sexual, tantalizing and evocative group of females with mystical powers. No one should surprised that two super stars like Jennifer Lopez and Shakira turned heads and seduced the crowd with their beauty, style, athleticism and artistic talent. The photo provided by Pepsi promoting the show was a bombshell of sex appeal, clearly letting the audience know: this will be provocative, times two.

Furthermore, belly dancing is hard. I would know because I am a belly dancer and have performed on stage at nightclubs. What Shakira is doing is hard work and it’s more than just a few sexy hip thrusts, she’s showcasing cultural art, dance and music. She’s isolating parts of her body and her muscles to move each part, one by one, sometimes in a fluid and constant motion. I remember years ago, one of my gay guy friends sent me a video of Shakira coming down the pole in her video “Rabiosa” with Pitbull and said “this reminds me of you”. An ex of mine, got jealous about it, which was absurd. True, the pole dancing by J.Lo in Super Bowl 2020 was pushing it a bit, considering kids were watching this event, but that is also an extremely difficult dance form that requires strength. It’s not just for strippers, pole dancing is a great core exercise and can really make someone feel sexy and empowered. Even if you pole dance in private at home.

Ultimately, no matter where you stand on sexuality, it shouldn’t be a shock, especially since J.Lo was nominated for an award for her role in the film “Hustlers”. Which featured a dance routine with her on the pole wearing not very much at all. Believe me when I say, she toned it down for the Super Bowl. Mind you, I did notice there was a lot of spread eagles and close-ups of intimate lady parts and was rather graphic. [Remember in the film “Chicago” when Catherine Zeta-Jones says she caught her husband and her sister doing the spread eagle?] Either way, I did notice that Shakira and J.Lo’s dance routines and their performances were dripping with sexuality and perhaps many didn’t appreciate the sex factor. But, again, why are so many people shocked? This isn’t anything new for either entertainer or The National Football League. 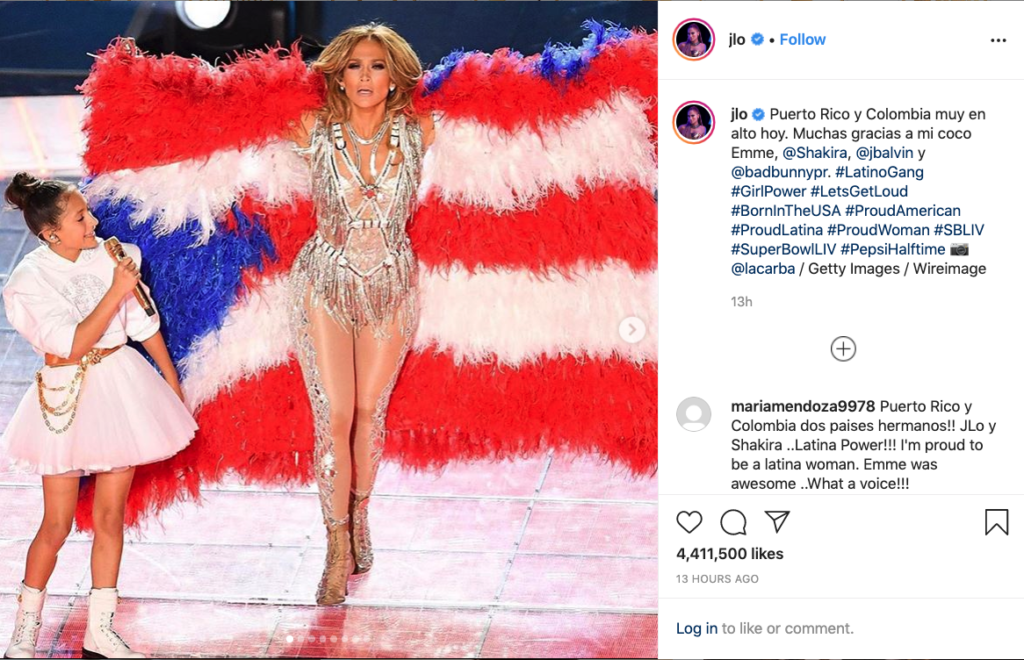 Today, my boyfriend was playing sports radio and three men were talking about the Super Bowl Halftime show. Listening to three straight Southern men talk about the performance was amusing, cringe worthy, depressing and cliché. I love men’s sports talk! But this was quite silly to waste this much air-time on gossip. Instead of talking about the costumes, hair and makeup and the fantastic dancing or their successful careers; the focus was on the women’s sexiness, appearances and their ages. The men talked about how Shakira had an outer belly button and normally that’s not sexy, but she pulled it off. One guy talked about how Jennifer was too old to be dancing like that, and so was Shakira. Other men defended the ladies right to entertain, which I appreciated. Although I did understand some concerns from one man, speaking as a parent, because little girls are looking up to these women and we’re already under so much pressure to be sex objects. Sadly, us ladies are damned if we do and damned if we don’t. We get treated like sex objects no matter what. We are either too sexy, not sexy enough, too young or too old, too skinny or too fat. Too confident or too submissive. It’s always something. Aesthetically, we can’t please every man and it’s not our job to do so. It’s exhausting how women are always expected to smile and ‘be ladylike’ and never be too pushy or you’ll look like a bitch. It’s simply impossible for girls to please everyone. So, I think the message is clear and just like Rihanna and Madonna said, we should “shine bright like a diamond!” and be “unapologetically ourselves”. J.Lo and Shakira give so much back to the community, why didn’t the men talk about the fact Jennifer Lopez has an estimated net worth of $400 million and Shakira has an estimated net worth of $300 million. Hips don’t lie? How about numbers don’t lie. These women are two fiery powerhouses that know how to make money, create a brand and flourish in a man’s world. 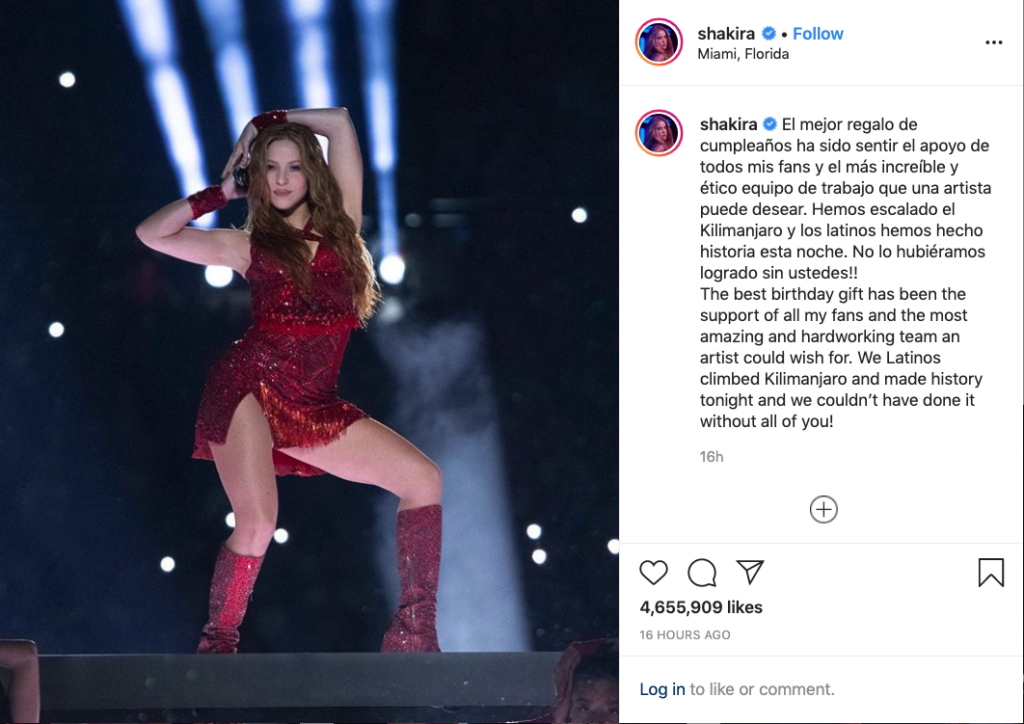 The first thing I said to Steven Mark, my boyfriend, after we saw the Halftime show, “I loved their costumes! I want every single one for me!” Because anyone that adores fashion knows that J.Lo’s handmade Versace and Swarovski clothes were to die for! I wanted to do a photo shoot in it and I can just imagine all the people around the world about to mimic these iconic looks. Already, a local dance studio here in town is offering Super Bowl Half Time classes for dancers to replicate the routines. All in all, it was an unforgettable performance that reminded me of Las Vegas.

¡Gracias chicas! Your hard work has paid off. ¡Viva Latinas!

“There is a rose in Spanish Harlem
A red rose up in Spanish Harlem
It is a special one, it’s never seen the sun
It only comes out when the moon is on the run
And all the stars are gleaming
It’s growing in the street right up through the concrete
But soft and sweet and dreaming

There is a rose in Spanish Harlem
A red rose up in Spanish Harlem
With eyes as black as coal
Then look down in my soul
And starts a fire there
And then I lose control
I have to beg your pardon. I’m going to pick that rose
And watch her as she grows in my garden.”