Amongst all of those bands who have graduated (or dropped out) from the University of Black Sabbath, very few have had a profound impact on me as much as Spirit Caravan.
My first introduction to Spirit Caravan was also my first introduction to Wino. I saw them at the Metropol in Pittsburgh back in January of 2001 opening for Corrosion of Conformity, Clutch and the Mystical Krewe of Clearlight. I was 18 and I remember a budding metal head at the show bumping my arm and pointing towards Wino, and clearly excited that one of the “Godfathers of Doom” was just walking around. I didnt think much of it until Wino and Co. opened the show and broke out with the main riff from “Dreamwheel” and from then on I was hooked for life.
Besides that I cant remember much else from that show besides that they closed with their cover of Black Sabbath’s “Wicked World”

With that said, 12 years later Spirit Caravan have reunited (sans original drummer Gary Isom with Henry from St. Vitus filling in last minute). They stopped in Austin for a total of four nights but to my knowledge only played 3 of those nights with the only showcase being the final night at Red 7.
As catching any show during SXSW when you work in the service industry totally sucks (I work at The Whip In, so stop by grab some beer and grub and talk music with me)
I caught a few of the bands that played the bill but the only one I remember off the top of my head was Marching Teeth, who came to mind as a great mix of the intricate progression and movement of Mastodon with the filth and thrash of High On Fire. I offered to pay for a CD but they gave me one for free and though it doesnt do their live show justice I think theyre a band to keep your eyes and ears on for the future.
Back to the Caravan, the stage at L.A. Barbeque is this ridiculously tiny makeshift stage directly in front of the meat-smoking trailer that’s barely large enough to fit the three of them and their instruments, and there is no room between the stage and the lines of picnic tables that reach back to the food trucks. A pretty intimate setting for a heavy metal bill with no room to stand up front and throw your fists in the air, but I made my way to the side of the stage and banged my head throughout the set and lip-synced the lyrics eye to eye with Dave Sherman who I shared some time with earlier in the day at the merch booth where we sang some Earthride lyrics together.
After some trouble with the soundman apparently ignorant on how to take his Ipod out of the P.A. With vocal threats from Wino and Sherman, Wino eventually said “alright just fuck it. Were doing it rock and roll style” and from there they went into that mighty riff from the same song that floored me the first time I heard Wino’s fingers touch the strings, Dreamwheel, and they played a lengthy set that featured the best of their short discography including the few rare tracks off of “The Last Embrace” chronology record.
Most of the song titles I can’t recall because somehow Ive lost all of their records except the Dreamwheel EP and Ive noticed on Facebook that the setlist changed everynight.
When Wino and the boys walked off stage to debate an encore I inquired/suggested/yelled/demanded “Wicked World” and Sherman replied “Nah man. Not doing it”. And what did we get? We got something better (which I could tell flew right over the heads of most). We got a heavy fucking cover of “Inside Looking Out”, written by Eric Burden and the Animals but perfected by Marc Farmer on Grand Funk’s debut record and also covered by Wino when we was in The Obsessed (which is how I first heard the song on the compilation “The Incarnate”). Its become one of my favorite rock and roll staples and needless to say I was happier than a pig in shit to hear them bust that out.

Potentially one of the reasons besides the music itself that has had a profound and positive influence on me is that Spirit Caravan (as well as the Obsessed and The Hidden hand) have lyrically and musically been profound and positive in itself. Only a few bands within the stoner rock/doom metal scene really follow such a path. As much as I like to throw the horns in the air and declare a “Hail Satan” with the rest of my budding metalhead peers, Ive always been less attracted to the overdone satanic/evil/fantasy imagery and the well over-traveled road of the beer/pot/whiskey/drugs/hate/depression/sex motif that the majority travel.
There are only a small handful of bands (Neurosis, Om and YOB and certain periods of Sabbath to name a few) a long with Wino who have played an unmovable part in keeping Heavy Metals IQ score from dropping any lower.

Speaking of The Obsessed, I asked Wino if there was any chance of The Obsessed reunion touring the states but he said it was unlikely due to circumstances with the drummers schedule. That’s a bummer but what the hell, it’s not stopping Wino, and let that be an influence on the rest of us not to live in the past and to keep moving forward with what we were put here to do, whether it be to write the riffs or to throw our fists. Keep going to the shows and keep them coming back. Its the only church I know. 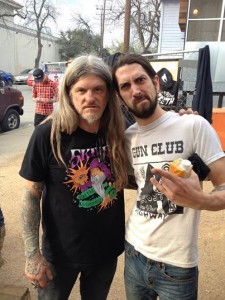