Posted on November 4, 2015 by Vanessa Hadrych 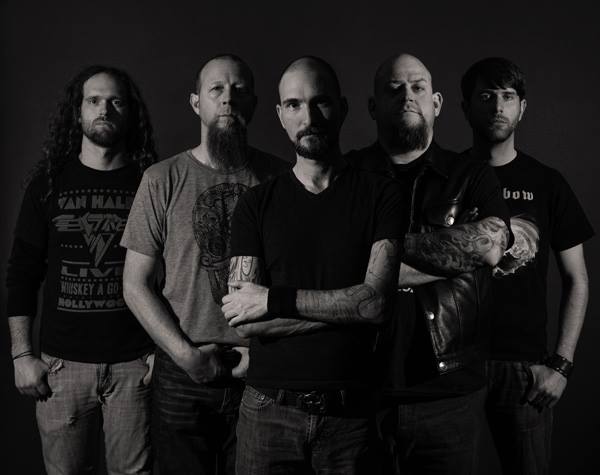 Seven cities, ten days, all culminating in a breakthrough performance at one of North America’s most beloved metal music festivals. For Austin-based juggernaut, Dead Earth Politics, the Road To Gwar-BQ Tour proved to be one of their most successful runs to date. With Gwar’s seal of approval, including a Road To Gwar-BQ video blog on Metal Injection to celebrate 30 years of Gwar, Dead Earth Politics hit the road running, gaining momentum at every stop. As the ambassador band for the festival, Dead Earth Politics spoke with scumdogs at every show, documenting first memories of Gwar, stories of the band and members, birthday messages to the band, and capturing the debauchery that follows anywhere the name Gwar is spoken. 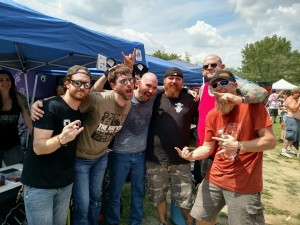 Tour Stop #1: Houston, Texas – Acadia Bar & Grill aka “And though they were few, they were mighty…”

Wednesday shows are tough – especially on Houston’s north side. What started as a small group of DEP diehards grew to a respectable showing of eager fans ready to fill the front of the pit to kick off the tour. Support act Carnivora kicked the night off with a set full of energy and promise. Mobile Deathcamp set the pace for the night, stunning new listeners and adding fresh blood to their loyal legion. Dead Earth Politics took the stage next, setting a breakneck pace for the tour. See the Metal Injection video here.

Personal Highlight of the Night: Meeting Todd Evans of Mobile Deathcamp. You may know him as a former Beefcake the Mighty. No big deal…

Left for Dead and Screw Missile started the night off, warming up their hometown crowd. Murmurs of Gwar-BQ and tales of Oderus could be heard between sets as the crowd mingled. Maybe because it was a Friday, maybe because it was a Friday at Bonds 007… either way, the drinks flowed like honey and the stage was primed for DEP’s second set of the run. As the set progressed, the front of the room filled nicely. By the end of the set, the merch table was filled with old and new fans alike, eager to score DEP’s latest recording. The Ruined Few ended the night with a set as odd as some of the Dave Brockie stories I heard that evening.

Personal Highlight of the Night: I didn’t run into this guy, once. Probably because he was outside telling the longest Gwar story ever.

Metal on a Saturday night in Austin? I’m just not sure you can beat it. Killer support talent, including Dead Now Evil, Death Will Tremble, Broken By The Burden, and Burial Wraith all slayed. Of the opening acts on this run, my hat goes off to this bill – there is some incredible talent in the pipeline for our genre. Not to be outdone, Dead Earth Politics played to their hometown fanbase with ferocity and precision. Dirty Dog was packed and the birthday wishes to Gwar were loud and messy. The Illustrated Cookie provided birthday baked goods to celebrate Gwar, and in true scumdog fashion, the crowd ripped the cake and cookie to shreds in what was surely the most metal food fight I have ever witnessed. The Dirty Dog might never be the same…

Personal Highlight of the Night: Broken By The Burden hooking me up with one of the coolest band posters I’ve ever had the pleasure of paying custom framing fees for to hang on my wall. I’d post a picture, but it’s currently at the custom framer. Just know that it is AWESOME.

Tour Stop #4: Lafayette, Louisiana – The Wild Salmon aka “We’re not in Texas anymore…”

Allow me to preface this section by saying that I love dive bars. I consider myself a connoisseur of sorts in all things dank and dive-y. The Wild Salmon went above and beyond my threshold for a dive and left me shaken and wanting more. Need a spare motorcycle part? Just dig around back by the inoperable pool table. Looking for ideas on homemade central air conditioning systems? Take a gander at the creative ductwork at this fine establishment. Legend has it the burgers are pretty damn delicious, to boot… With my senses still on overload from all that the Salmon had to offer, Clide Slavens and Arn Mait’n offered up incomparable sets. Hailing from Lafayette, Louisiana, Arn Mait’n is a three-piece (though rumor has it they will be adding a fourth member on fiddle) bluegrass Iron Maiden tribute band. Just let that sink in for a minute… Then go to Youtube and give these guys a listen. If you are in a band and you are looking for someone to play a show with you, please, please, PLEASE, call Arn Mait’n. I need more of them in my life. 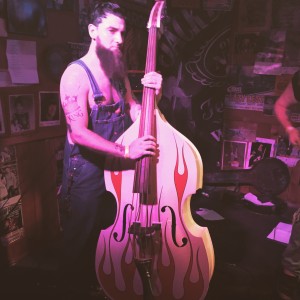 Personal Highlight of the Night: Tough call! It has to be a tie between being hit on in the least gentlemanly way possible by a Hell’s Angel (I’ve never scurried out of a bar looking for the safety of a man, any man, so quickly in my life) and the very charming young lady who carried around an oversized stuffed penis all night. Lafayette, ya’ll…

Tour Stop #5: Montgomery, Alabama – Head on the Door aka “Gwar is for lovers…”

Fresh off a few days respite at the scenic Lake Chewacla State Park, DEP picked up the pace for the final leg of the tour. Though one of the smallest venues of the run, Head on the Door proved to be one of the liveliest. Packed to the gills, with excess crowds spilling in the parking lot, Montgomery metalheads showed up for a night of music and mayhem. Backed by Plug Uglies, a music club that supports locals acts and helps out of state acts book in the area, the event was a rager from the opening act to the final note. Break the Crown and I Am Hostile ripped through the crowd, showcasing Montgomery’s burgeoning scene for the genre. DEP’s set was met with an equal fervor, with fans toe to toe with the band at the stage’s edge. There’s something happening in Montgomery and I am eager to see how the scene continues to grow. 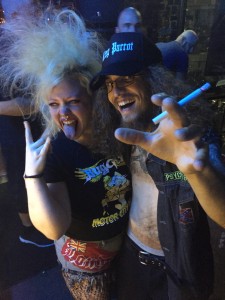 Personal Highlight of the Night: All that girl on girl action had me thinking it was Spring Break 2000. God bless a young hardcore scene…

One pool of blood red jello, one man armed with a G0 Pro and one band on the road to Gwar-BQ. Yes, there were opening bands and plenty of Gwar shenanigans, but at the end of the night, it came down to the Jello Wrestling Championship. As DEP’s frontman, Devon Brown, circled the jello pit lashing out a lyrical assault, and as scantily clad bodies slid over one another in some semblance “wrestling”, DEP Road Dawg Hutch Leatherwood boldly jumped into the mix. Within minutes, the pool was filled with over a dozen bodies, with countless others cheering on the debauchery from the sidelines. The battle royale lasted well into DEP’s set, until only one was left standing. And just like that, the night was a wrap. 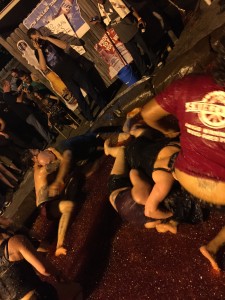 Personal Highlight of the Night: Watching attendees leave the venue looking like they had just left an actual Gwar show: Dazed, exhausted and covered in various liquid substances.

We arrived at Hadad’s Lake shortly before 8am to set up merch and gather our credentials. With a few hours to go until the admission began, we began greeting other artists and taking a tour of the venue. Housed in a water park which features a small lake, pool and some water slides, Hadad’s Lake is sort of the perfect setting for the annual event. Large enough to accommodate the crowds, with ample access to stages, rest areas and refreshments, the complex is still intimate enough to ensure you catch all of the action, including catching your favorite artists roaming about. The staff and volunteer crew (many from the Austin area), controlled the chaos like absolute champs and my hat goes off to them and their team. As the gates opened and the starting bands kicked off the festivities, it became evident that this was no ordinary fest. 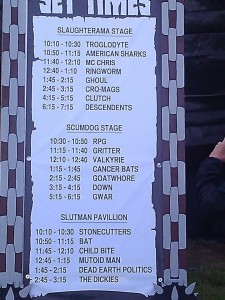 Between the three stages, catching your favorite band was simple enough. If you were lucky enough to post up one particular section, you had a pretty good view of all three stages, while being close to beer sales – needless to say, those spots filled fast! DEP played a late morning set on the Pavillion stage to a healthy crowd of eager fest-goers, ripping through crowd favorites like Redneck Dragonslayer. As the merch table filled after their set, it was obvious to see what a spot on a bill like Gwar-BQ does for bands like Dead Earth Politics. Earning new fans from different parts of the country is critical to the continuation of new music. For a band like Gwar to give lesser known bands a shot at their fanbase speaks volumes about Gwar’s love for metal and rock and the next generation of musicians and fans alike. As the day progressed, the crowds never wavered, despite the heat. The almighty Gwar’s set was a raucous as ever. Thirty years of Gwar, and every show still possesses the same power as the last. Diehard fans fought to the front of the stage to be bathed in baptismal blood and the pit quickly became trampled and muddy. Seeing Gwar on their home turf is an experience I will not soon forget. It is a thing of beauty to watch a band do something they love and even through the insults and sneering, you could feel love on that stage. 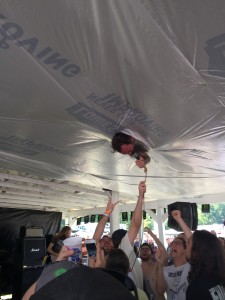 As headliners Descendents wrapped up a day of music, fellowship and shenanigans, attendees lingered, hesitant to end the day. Wandering through the crowds and listening to snippets of conversations is one of my favorite festival activities. Crowd-favorites included Detroit-based lunatics Child Bite (vocalist Shawn Knight’s stage antics included birthing himself from the tarped ceiling), Cro-Mags, the always astounding live co-headliner Clutch, headliners Descendents, and New Orleans’ based legends Goatwhore and Down. With nary a bad seed on the lineup, this year’s Gwar-BQ was the stuff of legends. As our vehicle pulled away from Hadad’s Lake, I was struck with an overwhelming sense of gratitude to have been a part of something that so many people believe in and devote countless time to. My sincere appreciation goes out to the Gwar-BQ crew and family for their tireless efforts, to Dead Earth Politics for letting me tag along, and to my fellow lovers of all things metal – you all make this crazy life just a little bit more lovely.

Personal Highlight of the Day: Watching Child Bite perform for the fifth time in eight months (I can’t get enough of this band), Jimmy Bower pouring me a beer, seeing so many ATX friends KILLING it on fest production… I can’t choose. 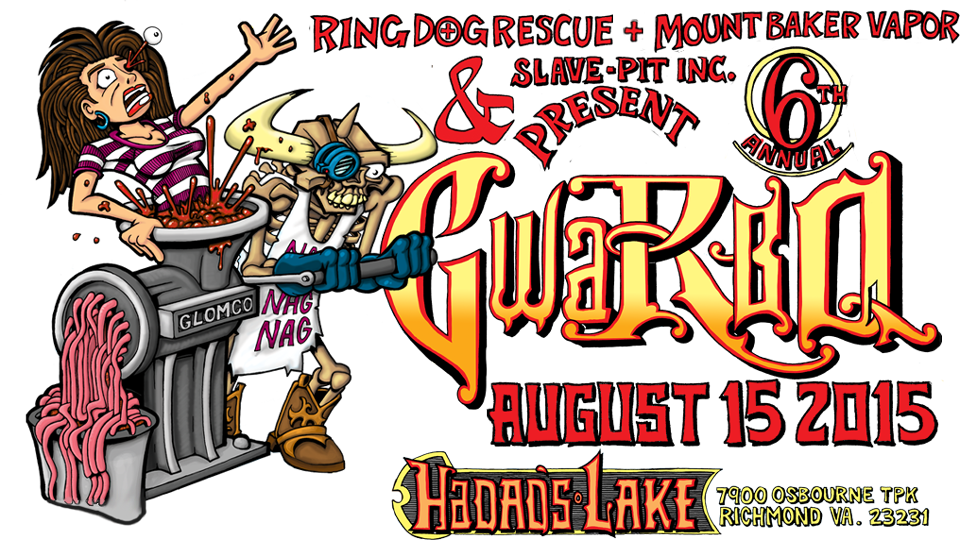