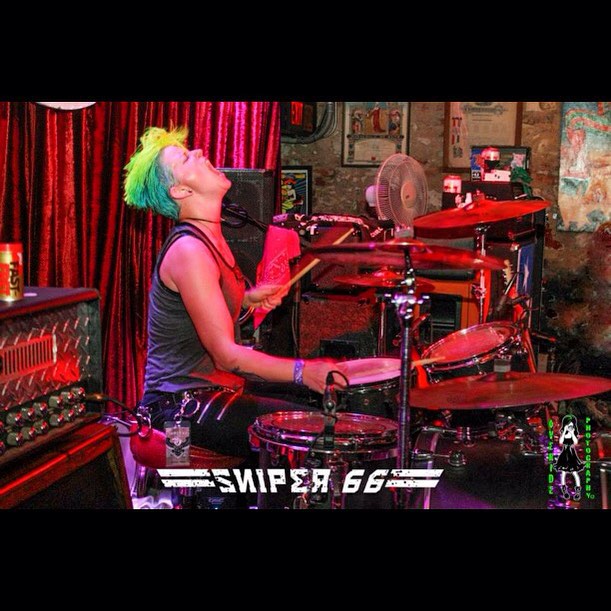 WW: How many punk bands are you presently playing with here in Austin? Who are they and how did you hook up with them?

April: I’ve actually been trying to whittle that number down a little bit since I’ve got two that are pretty busy now. I was in about 6 at one point, when I was trying to get my chops up playing with different people. I’m currently in Sniper 66, Starving Wolves, a live karaoke band called You Rule Karaoke that does special events, Fight Plan is technically still alive, and sometimes I moonlight with bands that might need help with a fill in.
I got in with Sniper 66 by just being a super fan and being at almost all their shows. They asked me to try out when they had to let go of their drummer at the time and I wasn’t NOT gonna get that gig. I almost screwed it up by being a bit too nervous!
As for Starving Wolves, I was on a Sniper tour with Kevin who was filling in for The Bad Engrish at the time; he wanted to show me some demos and said that the guys were already talking about me taking over for their injured drummer. I got back home, talked it over with everyone, and started working pretty much right away.

WW: When did you first start playing drums? What inspired you to play drums in the first place? Do you play any other instruments?

April: I actually didn’t start playing drums full time until 2004. I had always been lead guitar or bass for my bands up to that point. I had moved to TX in 2002, but I waited until the end of 2003 for my band mates from Alaska (I lived there during high school) to join me down here. Once they did, and we were just about ready to start playing live, our drummer quit unexpectedly. We decided to just narrow it down to a 3 piece and I moved from bass to drums then. Other than that I’m a total band geek. I played trumpet A LOT in high school…still do from time to time. 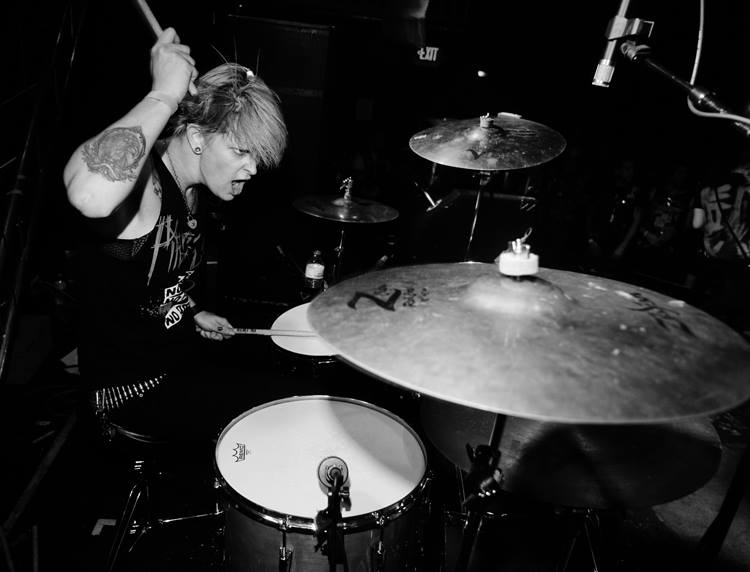 April: I don’t feel like I’m treated too differently very often, but it’s up to me to prove myself and just ‘be the drummer’. At the same time though, I end up holding women up to a higher standard when I see them set up. “C’mon, whatchoo got girl!?” Luckily I’m usually pleasantly surprised.
There are actually quite a few bands with killer female drummers: Myra-BadCop/BadCop, Katy-The Applicators, Cassie-The Red Heroes…just to name a few.

WW: Are any of your bands recording right now? Or have any releases coming out in 2017? 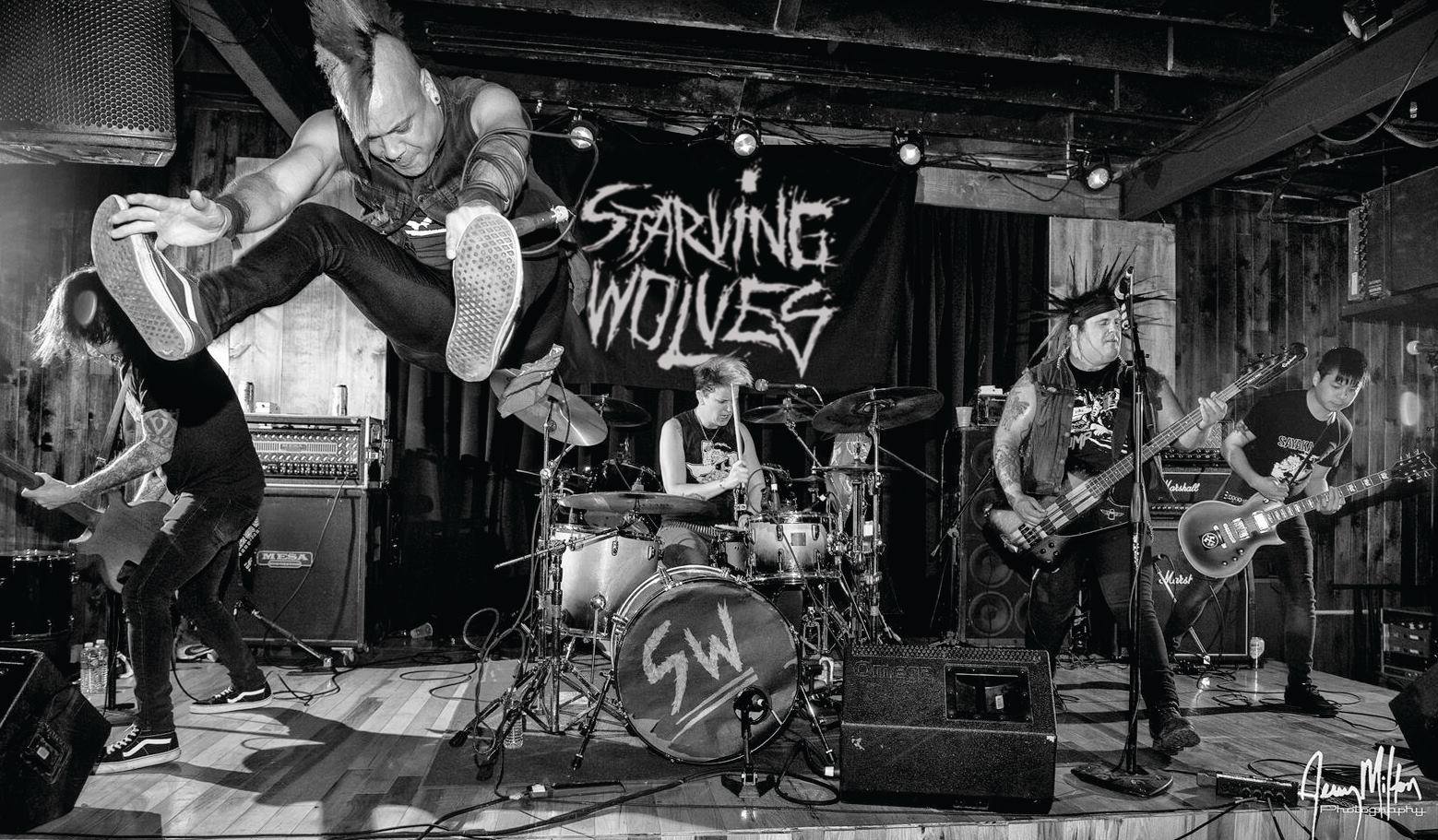 April: Ohhhhhhhyes! 2017 has been a big year for writing for both Sniper 66 and Starving Wolves. The first Wolves record is almost done, and Sniper is about to hit the studio to put down our 3rd full length! They won’t be out until 2018, but I’m so incredibly excited and proud to be able to put out 2 great records very soon. 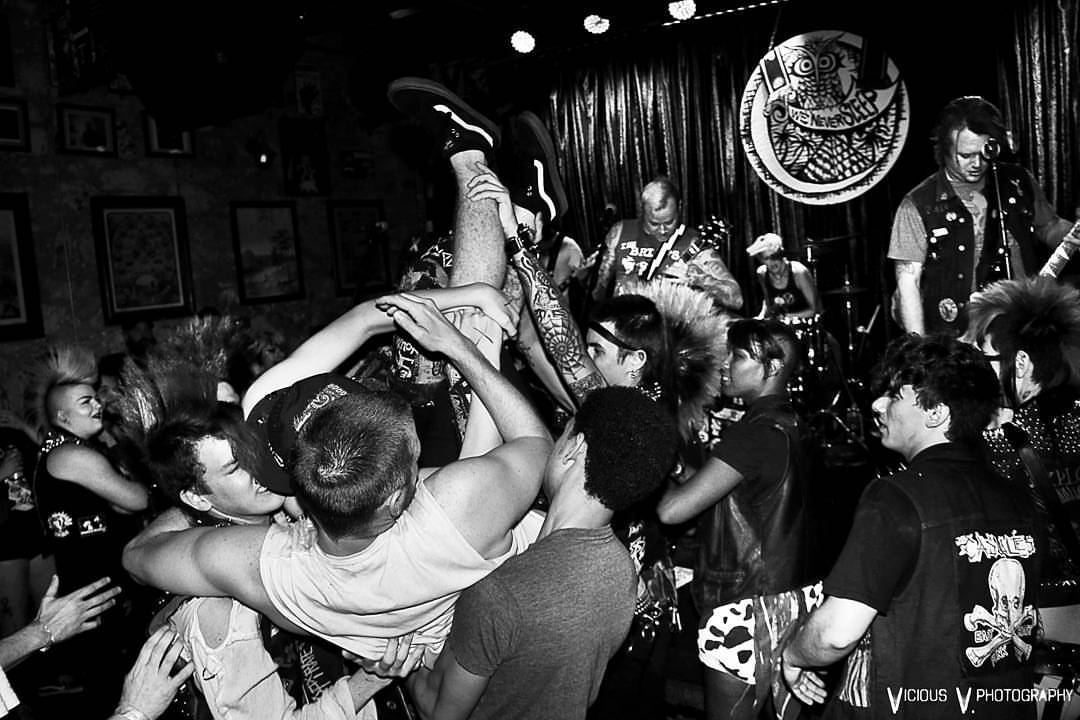 WW: Do you have any tours in the works?

April: Sniper 66 is going on a short tour in late July-early August that puts us in Denver for about 2 weeks to record the album. Once the albums are done, it’s gonna be whirlwind of touring to support them I imagine. I can’t wait. I absolutely love touring and feel like I thrive out there. Touring isn’t for everyone, but damn I love it.

April: Yeah there’s never enough minutes in the day it seems, but having a semi lax job and a fully supportive husband really helps. My typical day goes like this: crawl out of bed and go to work, go home and try to eat something quickly, practice with my bros, wind down with Nate then go to sleep and do it all over again. That’s at least 4 days a week, then shows most weekends. I feel like if you’ve ever got time to just sit down and watch TV, then you could be doing something productive.

WW: How was Punk Rock Bowling this year? I’ve never made it to Vegas for that but the photos I saw looked off the chain! How many have you played now? 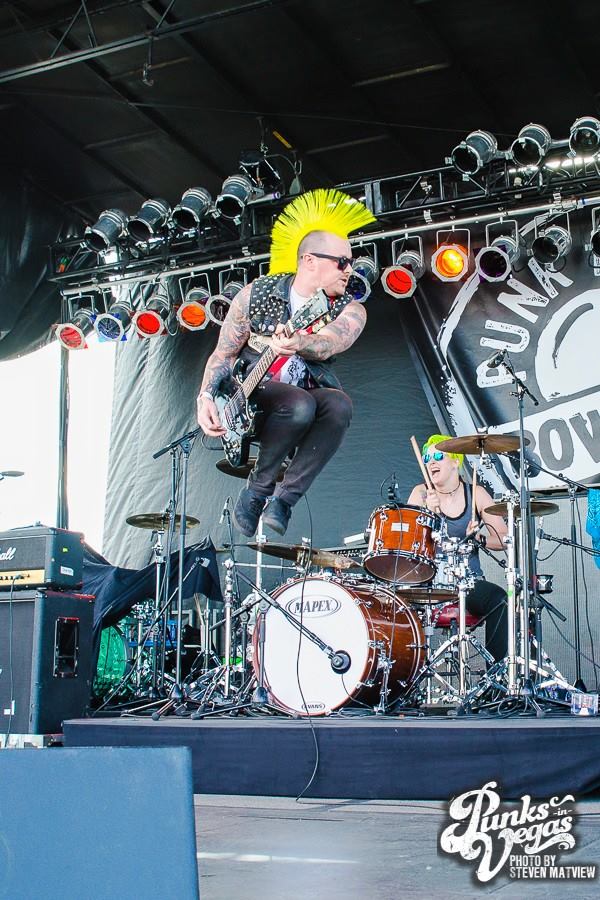 WW: Who are your musical influences?

April: My favorite drummer of all time is Derrick Plourde (RIP) who played on the first few Lagwagon albums, and later with Bad Astronaut. I always like to credit Mick Fleetwood for his awesome stage presence. That guy had more fun than anyone in the room when he played. I like to try to blend technicality with the sheer joy of playing music with my best friends.

WW: Any stand out bands you are listening to currently?

April: I’ll always put The Potato Pirates from Denver on this list. They are a stellar band made up of really good dudes. Pears, BadCop/BadCop, that new Cock Sparrer album is awesome, The Interrupters, Booze & Glory, Oxymoron is always in the rotation. All good stuff from really hard working people.

WW: I was a female in an all male band back in the 90’s so I know what it’s like being on the road with a bunch of dudes! What advice can you give to aspiring female musicians?

April: Just be yourself and don’t take anything too seriously. I’m lucky enough that I get to tour with some of the sweetest and most respectful guys in punk rock. We all take care of each other and keep each other safe. As an aside…I probably spend the least amount of time getting ready than any one of those dudes! That’s always been funny to me.

WW: What kind of kit are you playing? How do you stay in shape? How many hours do you think you practice per week?

April: I’m playing on what I call a ‘Frankenkit’ right now. It’s a collection of things that just sound good together. I need a new kit pretty bad though. I’ve put this one through the ringer over the past couple years. As for my health- playing drums nearly every day and always loading gear sure helps, but I’ve also been running a lot. I’ve noticed such an improvement in my stamina with that. I used to skateboard a lot but I can’t risk injuring myself now, so running has been a welcome substitute. I can say I practice at least 12 hours a week, sometimes more when I’ve got special projects. 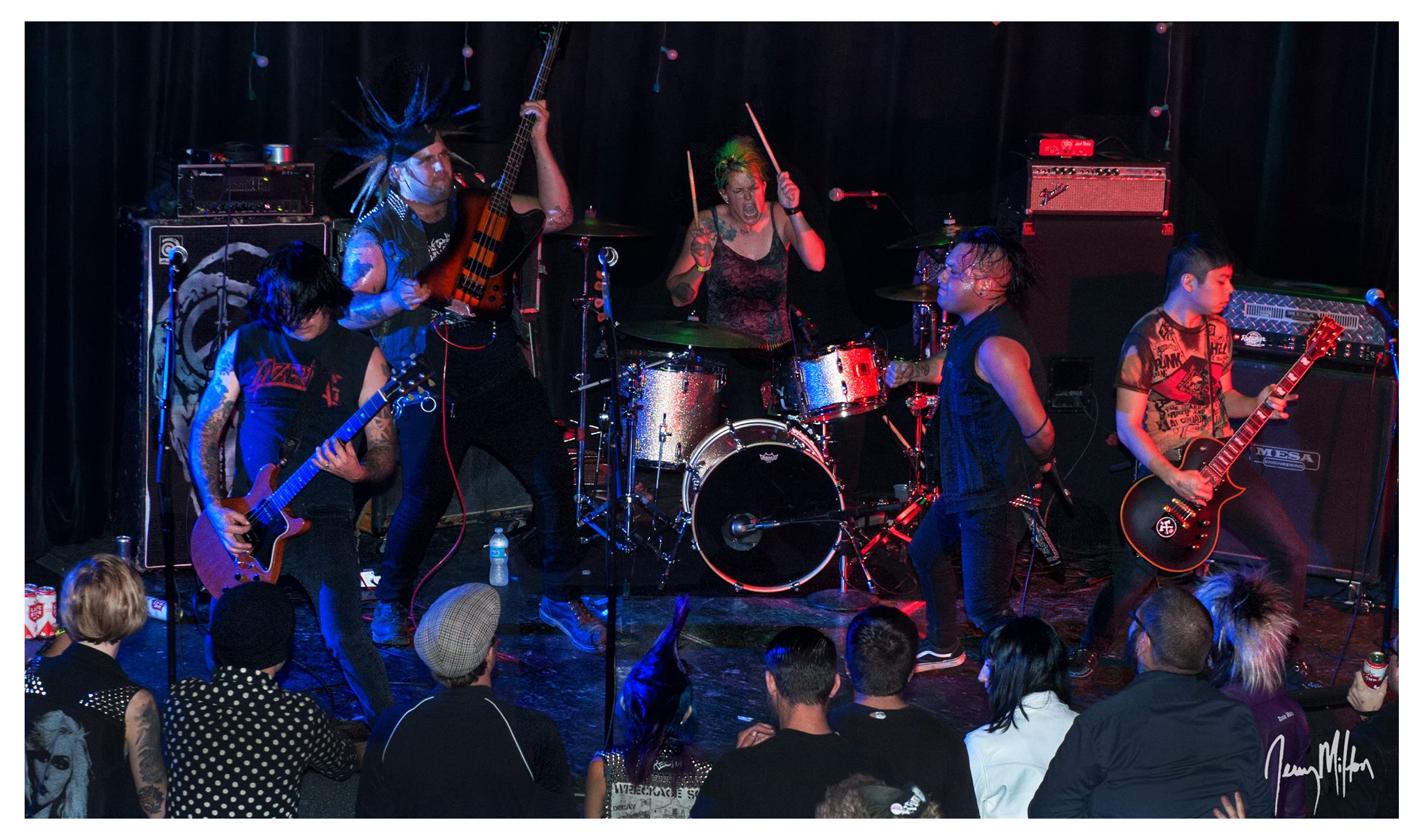 WW: What is your definition of success?

April: I’m living it right now I guess! I get to play music with my favorite people. I get to travel and see the world. I get to make new friends all over and sometimes people tell me they are inspired by me. That’s pretty damn awesome. There are always new benchmarks to hit, but I could die happy and fulfilled right now.

WW: What are some of your favorite places you have played? Dream destinations?

April: My favorite venue hands down is The Observatory in Santa Ana, California. They take such good care of bands and make you feel like an actual ‘artist’. Sniper 66 toured Europe recently and just about all of those shows were amazing. Berlin was fun as hell, but they’ll make you stay up drinking til after the sun comes up the next day! (not a bad thing if you ask me).
I’d like to do some of those summer festivals over there like Rebellion, Punk Rock Holiday, and Groezrock.

WW: Do you have any shows coming up we should know about?

April: Sniper 66 has a show at Bulls on 7/22, a boat party on 7/23, will be on tour from 7/27-8/12, and has a show with our friends Pears on Oct 2 at Barracuda. Starving Wolves has been working on wrapping up that album, and David is about to go on a two month run filling in on vocals for The Casualties, so there’s nothing in the chamber with those guys just yet other than writing more material and gearing up for the inevitable tour… but like I said, once the albums are out we’ll both be hitting the road like crazy!

WW: Final words of wisdom to your fans out there?

April: Stay true to yourself always. If you know what you want in life go get it, dammit! It takes a lot of hard work, but it’s always going to be worth it.
Also, to those who have supported my bands throughout the last few years…THANK YOU. SO MUCH. 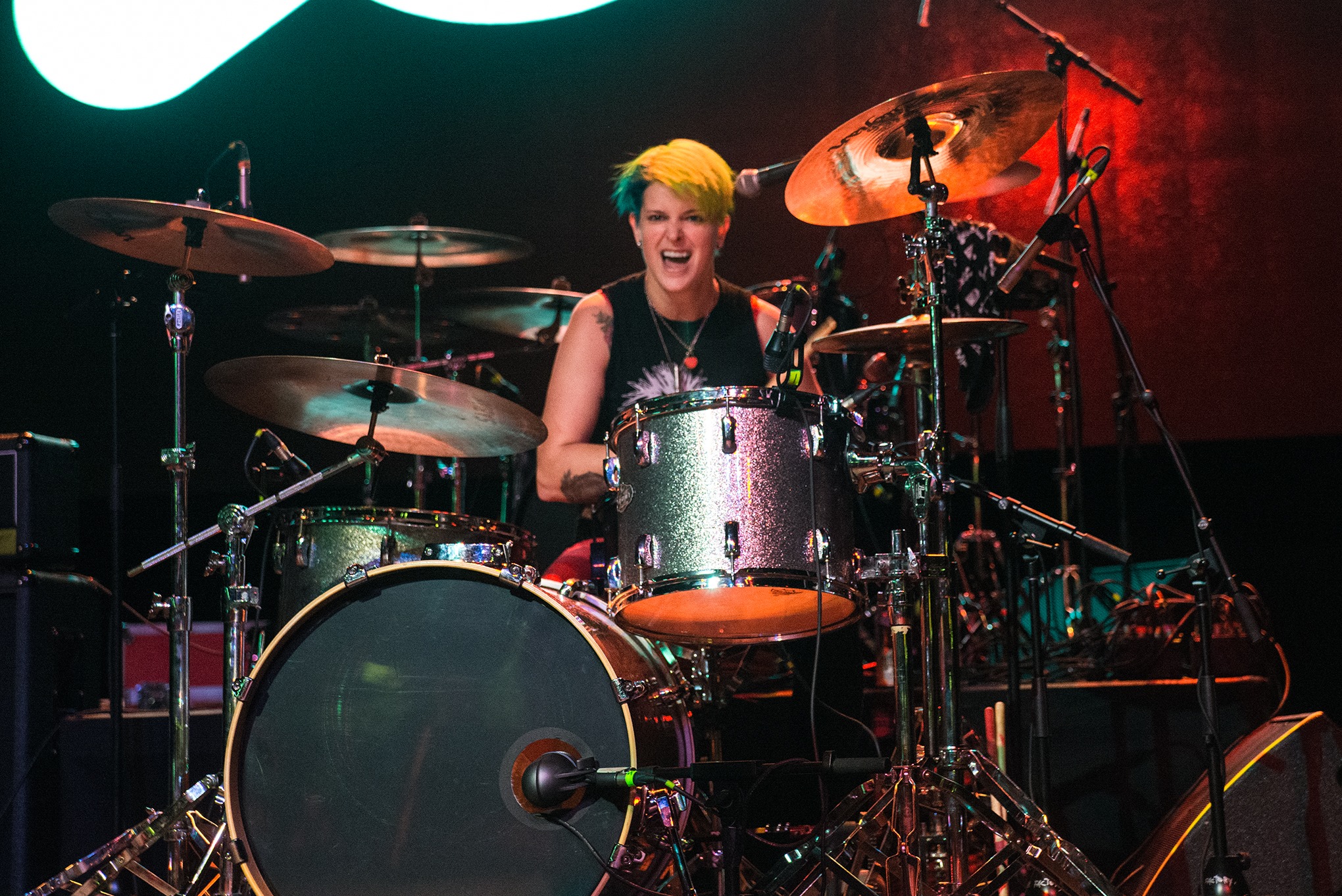 Check out April Schupmann at: