A mini festival of sorts thrown by American Icon Records took place over the July 4th weekend at my favorite venue, The Mohawk. The owner of A.I.R is a regular entrepreneur, as apparently most the income for the company comes from his sales of vintage clothing on Ebay. I’ll be honest w/ ya, I had just glanced at the American Icon clothing page on facebook, but had never headed over to the Ebay page.  If Salvation Army isn’t your style and you aren’t old enough to own the shirts from the day they came out (guilty of both) AND ya have a few spare C notes, check ’em out.  If nothing else, they are cool to look at!

In either case, I was just happy about the bands that were booked for this weekend gig. On July 4th, the headliner scheduled was Pentagram, but more on that later. First up, on the inside stage it was Houston’s loudest band, Venomous Maximus. The band always has a faithful road crew with them, so always cool to see some Houston folks in attendance, as that is where I grew up, but only go back that way if I have to, haha.  Their LOUD helltown style of Metal was the proper way to start off the evenings festivities. You can check out their tunes on Bandcamp, yo. 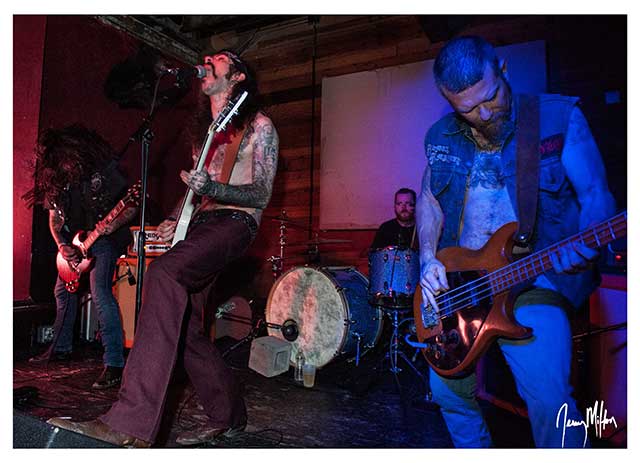 Next up I headed outside to check out local War Master.  Death Metal bands w/ their crazy fonts I can never read (I suppose that is the point) have never been my cup of tea, but somehow when I see these bands LIVE, I don’t mind rocking out one bit.  Our editor Wendy WWAD was doing so in fine fashion at the front of their set. The bass player, Trans Am and his cohorts, with Lone Star spewing out to the crowd, look and sound to be good at what they’re going for…if you’re of the Death Metal genre, you can pickup patches, T-shirts and sounds of War Master here. 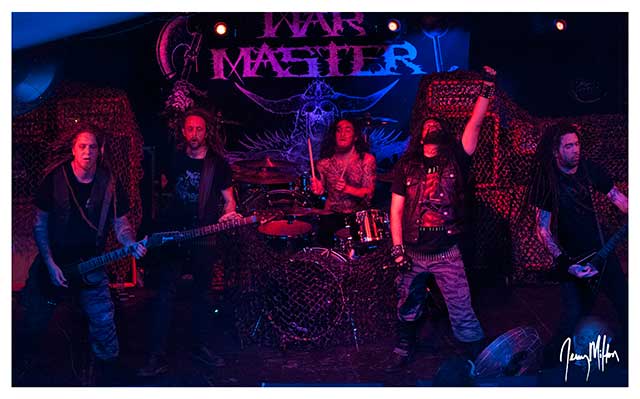 I went back inside for the dynamic duo / brother, sister act from Chicago… White Mystery.  I got a chance to check out Alex & Francis White at SXSW on a houseboat floating down Town Lake a couple of years ago.  Homegirl on guitar can hold her own…and just to solidify the fact that her brother on drums is a badass….he did so on a tiny cobbled together drum set w/ ONE borrowed cymble procured just minutes prior to their set.  I would classify Francis’ vocals as haunting, but in a fun way.  Did I mention that ORANGE was a sponsor of this weekend fest? Reckon that is why/how White Mystery ended up on the bill of otherwise locals in support of Pentagram, and I’m damn glad that was the case.  Check ’em out on their styling website here. 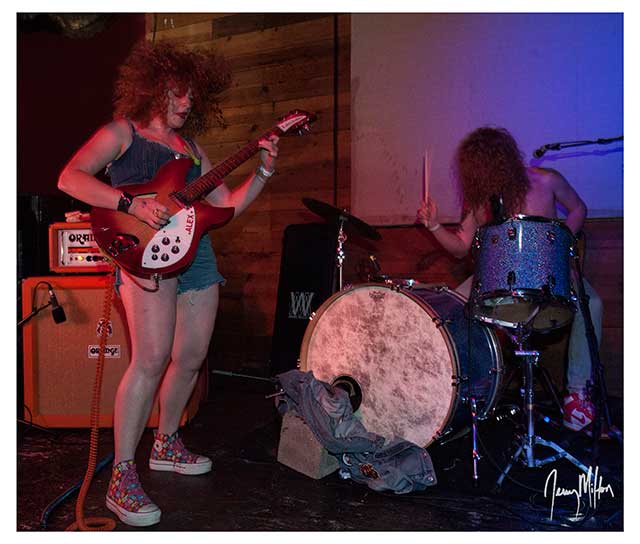 Back outside I went…and on stage were locals The Well. When they first hit stage, I was thinking “I’ve seen these guys/gals somewhere”… and sure enough I had taken them in a few weeks earlier opening up for Fu Manchu at Red 7.  Not sure how long they have been playing together, but a solid 3 piece rock band for sure, stilettos and all. Worthy of a couple of live shots so here is the first… 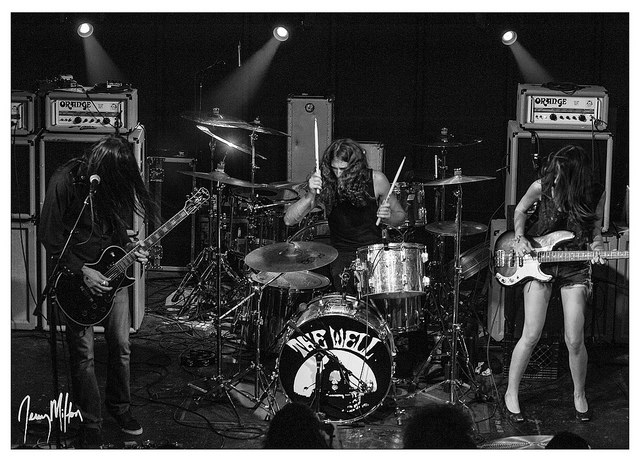 Having a proper Stoner band right before Pentagram hit the stage was the perfect recipe in my book, as that kind of music is right in my wheel house, as well as I’m sure fellow Austinites. In Doom Metal we rest. 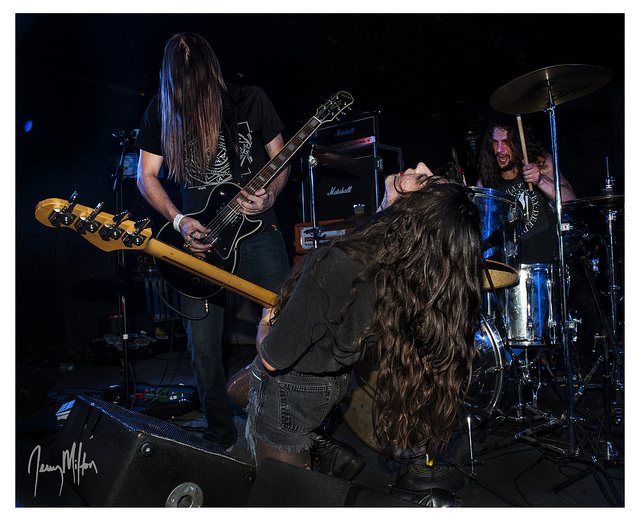 And FINALLY by way of the badass documentary “Last Days Here” (available on Netflix) it was time for PENTAGRAM to hit the stage.  Would Bobby actually show up? After watching the film, one might have good reason to have doubt….but just like the positive note the flick ended on, I had already heard that the odds were good that the famous “no show” Bobby would not come to fruition on this night, and sure enough there he was on stage in all his splendor.

It was awesome to hear from the first song that Bobby’s voice was strong, which if one were to go on how it sounded during his in between song banter…one of those rock mysteries that always surprise me.  I won’t claim to be a Pentagram expert by any means, but I have gotten to listen to A LOT of their material thru the years and rather than rattle off which songs they did and so forth….head on over to the setlist website yo.  Victor Griffen, who has been on and off since the 80’s with Pentagram is a solid force in their Doom Metal sound. One can tell he isn’t just some hired gun and given the bands history, quite refreshing.

Of course, like the veteran front man since ’71 that he is, Bobby’s mannerisms are legendary and his antics haven’t toned down a bit. Okay I’m sure they have maybe a little. He wasn’t sporting the wacky platform heals as seen in some rare videos from back in the day, but for anyone who has taken in the documentary, proof positive that the human bodies ability to endure is a most wondrous thing. Here’s a shot from the end of the set, and as you can see, it was well received by all.

And that was just day one of the Metal gem, day two promised not only my fav local Metal band…but favorite regardless of their locale, THE SWORD.

But first up was another full set of opening bands beginning with Eagle Claw.  Somehow I’ve managed NOT to see these cats up til this point, and what a pleasant surprise. Double Gibson guitar attack from natas. 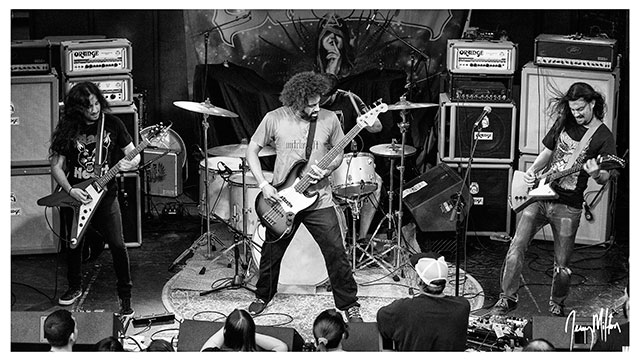 Go and pick up their self described “Genre Heavy” either one of their instrumental albums “Timing of the Void” or “Poacher” thru the usual venues, iTune or Google Play, or their website for music, T-shirts/Merch and tour info.  As for their set on this night, it was a perfect set up for what was to come. Metal, hold the vocals and crank it to 666. 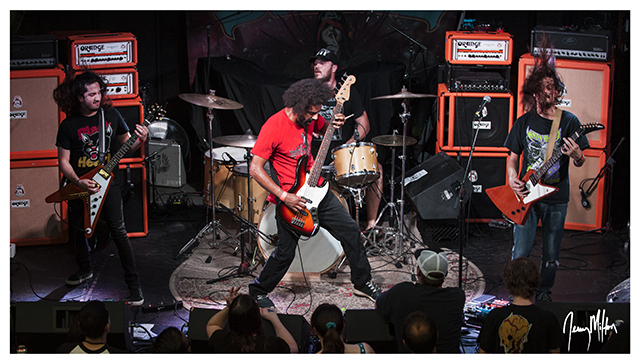 Next to hit the stage this night were more locals by way of American Sharks. Guitarist Will Ellis’s cutoff shorts circa 1977 set the tone for a badass set.  Like the majority of successful acts that make it out of Austin, their local shows are few and far between as they are on the road a lot, with upcoming tours featuring the Whores and Clutch. 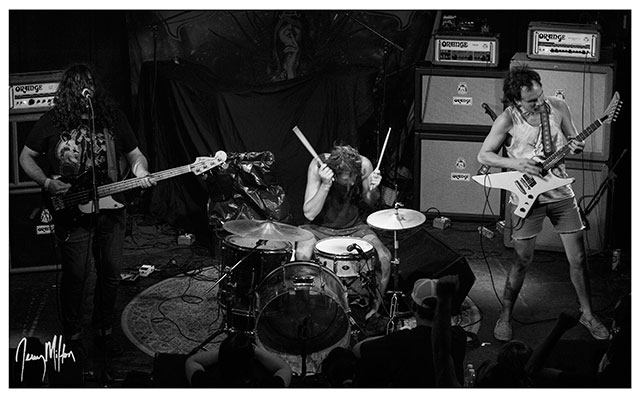 You can check out their music, merch and tour dates here. Don’t miss them if they happen to be rollin’ thru your town with their “Satanic Overture” tune-age.  Hell, they sell grinders on their website. Enuf said, dude. And just like that, it was time for THE SWORD !!! I was hanging up on the balcony, cooling my jets in between sets and noticed that some of their relatives of the parental type looked to be in attendance and why the hell not, as it was a surprising COOL night w/ a nice breeze for this time of year in Austin. 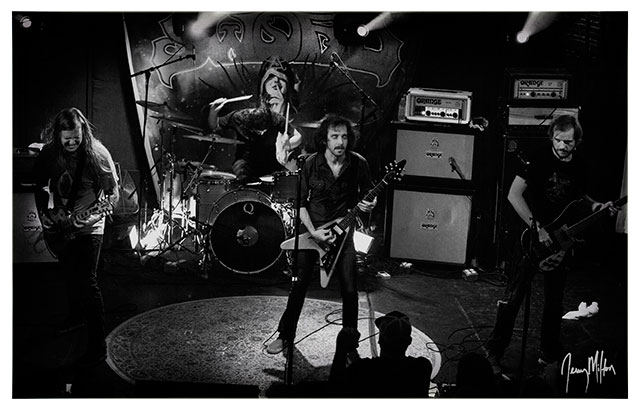 What can I say about these guys? I have them pumping in my headphones DAILY on my morning or afternoon runs. Perfect tempo of fuckin’ METAL. Let’s take a gander at the setlist, shall we.  Not sure they could possibly play a song that I didn’t rock out too, it hasn’t happened to date. The end of the set w/ The Veil of Isis, hell yes.  Rush 2112ish. rawk. 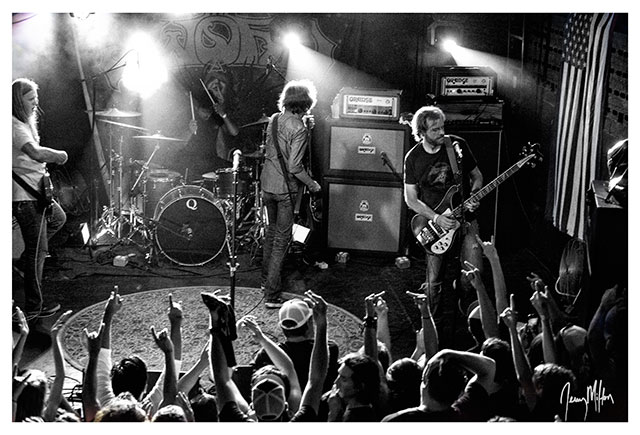 If ya haven’t listened to, or checked out these guys….take the time to do so here.  They have badass videos as well.  If ya wanna check out MORE pictures from this weekend, head on over to my Flickr, yo.