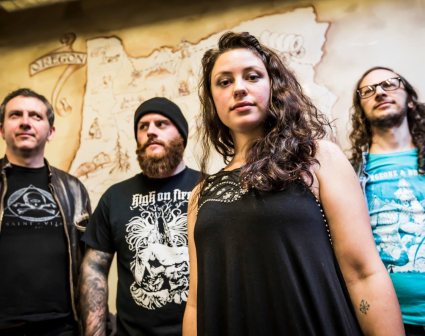 X: How would you say your sound has evolved on this new album, Mobile of Angels?

Nathan Carson (drummer/manager): It’s our fourth album, and our third with Uta. By now, the band is really out from under its influences, and has firmly claimed an original territory in the doom tradition wherein the heaviness is based on true emotion, rather than simply riffs and volume.

X: What is the connotation of Mobile of Angels and who wrote the lyrics?

NC: It’s derived from a nightmare that our guitarist and songwriter Rob Wrong had. The cover art helps depict this. All the lyrics were written by our singer Uta Plotkin. You can’t sing someone else’s lyrics with that level of conviction.

X: The album cover is very striking, who is the artist?

NC: Sam Ford drew this, as well as our last album cover for Cauldron of the Wild. Both were colored by Jason Lewis of Marvel and DC comics fame. You can read a great interview with Sam about the creation of this art on the And Justice For Art blog. 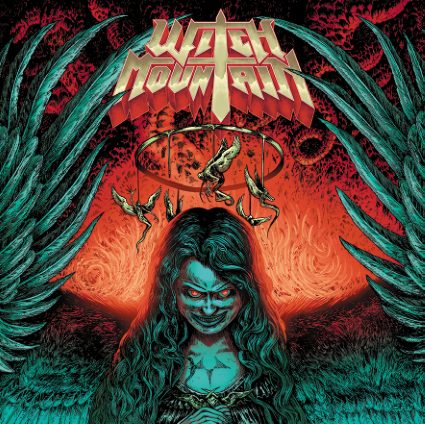 X: On the track “Can’t Settle” on Mobile of Angels, is that Uta growling? Is she possessed?  What is she saying?

NC: Yes, that’s Uta all right. She chooses when to growl and when not to growl. In that specific section, according to the lyrics sheet, she’s saying, “Limb, limb, give in. All lies, why try. Limbs give in to all of the lies.” I’m paraphrasing, but hopefully that helps.

X: What has the experience been like having a female in the band? Will Uta change genres going forward?

NC: Well, fifty percent of the world is women. Rob and I have both played in bands with women before. If you’re in a band that’s just a bunch of dudes, you’re really missing out on half the equation and discussion that there is to have in collaborative art. I would say that more women have been drawn to the band, which is wonderful, particularly in a genre like metal. As for Uta’s next move, only she knows the answer to that, and I’m not sure even she does just yet.

X: As far as your search for a new vocalist, if you could have anyone, dead or alive, who would it be?

X: What lead to your attraction to doom rock?

X: With all the world traveling, are you content to remain based out of Portland?

NC: Absolutely. I have been many places, and none I’d rather live in. The cost of living and quality of life here is unparalleled. The best beer, coffee, weed, clean air and water, and a half million people who want to live in a nice place and not fuck each other over? Yes please.

X: You have an upcoming tour with Hawkwind. How would you describe your connection to Hawkwind?

NC: Well let’s please be clear that this is Nik Turner’s Hawkwind. The other Hawkwind is in the UK and cannot visit the US for various reasons. Our connection is that I’m the North American booking agent for Nik Turner. I saw his SXSW show in 2013, and over five days and nights of shows, they put on the best concert I saw that week. We had planned a fall tour for him, and Witch Mountain had aims to do a very similar route. Rather than chasing each other around the country, we decided to join forces. There was a tour in the 90s in which Nik Turner took out the band Sleep as support. It went very well, so we are trying to recreate some of that magic. 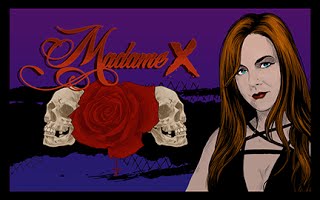 This entry was posted in Uncategorized and tagged Hawkwind, Uta Plotkin, Witch Mountain. Bookmark the permalink.