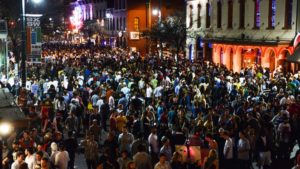 Are you ready for this?

The fever of SXSW is about to hit all residents near ground zero (6th Street) and beyond. While all the hype of wrist bands and corporate sponsored bands fill the air for most festival goers, there are some of us that hide in the shadows. A lot of long-time Austin residents remember a smaller festival that showcased more bands instead of trying to sell you the flavor of the day. A time when it was a lot easier to catch punk and metal shows downtown. That time, my friends, is gone. However, there are still enclaves that cater to the dark arts. To all those places I salute you and will probably frequent your establishment that week and beyond if I don’t already. Today we look at one of the refuges for punk, metal, and beyond in Austin. That place is Kick Butt Coffee, Music, and Booze or Kick Butt Café for short. It is a little gem just 7 miles north of downtown Austin. If you are

Where the magic happens

in town for SXSW or just live in Austin and want to see some of the best the Austin scene has to offer while keeping entry affordable and the SXSW bs to a minimum look no further than Kick Butt. You are

about to enter the no wrist band zone.

Kick Butt is a hybrid Coffee Shop/Full Bar/Concert Venue located in Austin off Airport Blvd by the old Highland Mall. It is known mostly for metal, punk, rock, and comedy shows as well as its full alcohol bar, all kinds of coffee drinks, and vast drink menu. 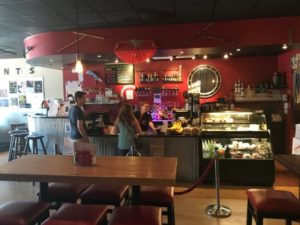 During SXSW Kick Butt is one of the few venues that tries it’s best to showcase as many local badasses as possible while sprinkling in some bigger names to round out lineups. This year is no different with 83 bands spread over 9 days straight of  unofficial SXSW goodness.

Kicking off the Interactive Weekend Kick Butt will be showcasing an amazing punk bill on Friday March 9th which includes local greats Vacancy, Yikes!, Shitty Advice, with 13th Victim rounding out the bill.  Saturday 3/10 Kick Butt will host Rock Star Magazine’s 5th Anniversary party. The magazine’s show has hard rock and metal focuses, but the diverse line up in itself is more than enough of a reason to check out this bill. Castaneda Project, The Boleys, Dharma Kings, and Jacqui Walker headline this 10 band bill that will utilize 2 stages. 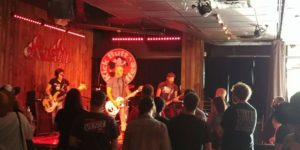 Finishing out interactive weekend is Kick Butt’s Metal Coffee Shop show. The show consists of an 11 band line up going back and forth on two stages. Sludgy, Evil, Doomy, Crushing, and Droning could be used to describe a lot of the sounds you will hear on this bill. The show will be headlined by local greats Destroyer of Light with support from Cave Swimmers, Kleaver, Curse the Heavens, Taverner, and Debilitator to name a few. The event will also have Zucchini Kill Bakery providing devilish treats in the flesh and Gore Noir magazine will have a merch booth and horrific images projected to end interactive weekend. 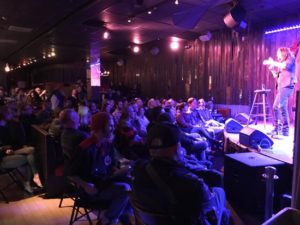 To officially kick off SXSW Music Week Kick Butt will be hosting the only Dead Boys show in Austin as they embark on their 40th year anniversary tour of Young, Loud, and Snotty on Monday 3/12. A line up of local openers (Eastside Suicides, The Pistolators, and Ghost Wolves) will set the mood before the legendary Dead Boys take the stage.

On Tuesday 3/13 there is another diverse line up of 6 punk and rock n roll bands featuring another all local line up. Before The Devil Knows Your Dead, The Sweet Hearts, The Clastic, Aeon Nova, The Lewd Dudes, and The Homewreckers will all be featured that night. Every band on this bill has a different sound, but they all complement each other very well and kill it live.

Wednesday March 14th and Thursday March 15th Kick Butt and Ethan Boley present Hippy Punk Funky Fest. This is a huge 2 day festival spread across 2 stages with most of the band curation done by Ethan Boley. Ethan and his brother and sister play in the Boley’s. Their sound can be described as a psychedelic experience acid washed by punk rock rawness. In addition to seeing the Boley’s perform the Legendary JD Pinkus from the Butthole Surfers will be doing a solo

banjo set showcasing his new album Stay On The Grass. Other notable bands you can catch between the 2 days include but are not limited to: Sailor Poon, Worm Suicide, Dayeater, Black Syrup, Ocean of Stars, Jaguwar, Los Wilds, Dayeater, Peyote Coyote, Bird Casino, and Burn Ban and many more. Bands of all shapes, sounds, and sizes will be included on this 2 day behemoth.

Friday Kick Butt presents the 2nd giant metal festival it is putting on that week called Keep Austin Evil Metal Festival. This festival will showcase 10 awesome bands for $5 and if you come before the show starts at 5pm entry is free. The whole bill is amazing with Gnar Wolf, Death Motif, Dead Horse Creek, Zero Percent, Bloodshot and Last Judgement rounding out the top of the lineup that is again spread across 2 stages.

Saturday March 17th Kick Butt will close out SXSW by again hosting the annual Altercation Punk Rock BBQ. The Punk Rock BBQ was started by Comedian JT Habersaat of Altercation Comedy and showcases all kinds of amazing punk bands. This year will be a special treat as Blag Dahlia from the Dwarves will be making an appearance and doing a special solo set which includes spoken words, songs, road stories, and whatever else he feels like doing. Other notable bands on the line up include but are not limited to: The Grizzly Band, The Fantastic Plastics, Heels, Despero, Nowherebound, ASS,  and many others. The show will also be local favorites Punks on Parades’s last show ever. The best part about the Punk Rock BBQ besides the bands is that it is free and will have free beer and food until it runs out.

After the all-day craziness of the Punk Rock BBQ Kick Butt will close out SXSW with Lee Camp. Lee Camp is a premier comedian who zeros in on social and political commentary. He has his own show called on the web called Redacted Tonight that is akin to a more balanced and raw version of the Daily Show. The hilarious Josh McLane will host with JT Habersaat doing an opening set before Lee.

Kick Butt is dedicated to bringing more local artists into the spot light all the time and they amp that effort up during SXSW when most venues in this city do the opposite. There are a lot of things to do during SXSW, but if you want diverse line ups and talent that doesn’t stop look no further than Kick Butt for SXSW. Kick Butt is one of the few venues during 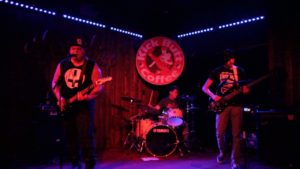 SXSW that makes it a priority to showcase the best Austin has to offer. If you want to get your finger on the pulse of the Austin Music Scene check out Kickbuttcoffee.com and their show calendar for show times and full line ups. They have plenty of free parking and most shows for SXSW are free or $5 at the most. Want to avoid the crowds, high prices, traffic, parking, and corporate sponsored crap music that floods most of the downtown area during SXSW? If so Kick Butt is one of the venues in Austin that there for you.