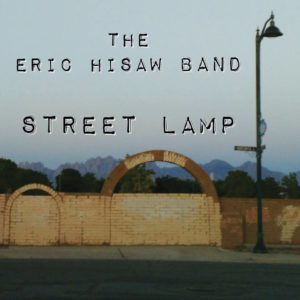 Eric Hisaw has paid his dues and then some. Whether honing his guitar skills with various legendary Texas country rockers, or his overall songwriting, performance and vocals skills at open mics, pick-up gigs and residencies at iconic Austin music dives such as the Hole in the Wall, Hisaw (pronounced much like “Hee-Haw”) should have been a household name over a decade ago.

This record just may be the one that does just that. A short but intense and eclectic album at only 8 songs and less than 30 minutes, this record nonetheless hits every nook and cranny of Texas-bred Americana that Hisaw seems to have mastered.

The sentiment of record opener “Hurry it Up” is immediately familiar. An outsider insanely attracted to someone in a bad relationship goes ahead and says, ‘dump this person so we can get it on without sneaking around.’ ‘It’s complicated.’ ‘Hurry It UP!’ You’ve done it. Despite the karmic implications, you’ve done it. You were on a rescue mission! Yes you have. Shut up.

The record includes accordion-driven ballads, catchy country-rock mid-tempo numbers and a perhaps slightly autobiographical tune in the form of “Reservation Radio,” a song about a broken family and a prodigal daughter.

As an aside, what is it about so many middle-aged rockers that they have a hint of Elvis Costello in their vocals?

From the catchy honky-tonk rocker “Hurry it Up” to the anthemic cover of CenTex rock gods The Sir Douglas (Sahm) Quintet’s  “Revolutionary Ways” that closes it, this brief but sweet record does exactly what it should: gives you a tour of the musical mind and heart of Texas and leaves you wanting more.