Danny Bland has been in bands (The Dwarves, Catbutt and the Best Kissers in the World), he has managed bands (Supersuckers, John Doe etc…) and now he is a novelist. He still travels with bands, but now he also travels doing book signings and readings. From being on stage, to being back stage and back in front at book readings we had a conversation about bands, writing and everything else.

JH:  So for those people who don’t know you, why don’t we start with all the bands you have been in.

DB: I don’t think there is anyone who doesn’t know who I am (both break out into a long bought of laughter) I thought this magazine was for cool people.

JH: Well it is but let’s say some of them are shut ins, or mentally stunted and proceed from there.

JH: We are all glad because friends are better alive than dead and infamous.

DB: Absolutely, you never would have heard of me or known me if it wasn’t for that.  After treatment I joined “the Dwarves” every show I played with them I was clean and sober. After a while “the Supersuckers” had a member who had the same delicious craving for heroin and alcohol that I had and he had recently stopped so they asked me to come along on tour. I was there so that I could show him how a rock and roller went out on the road without getting fucked up every night. About half way through that tour I was road managing them and by the end I was their manager.

JH: Supersuckers was the first band you managed, how many others have you tour managed and been on the road with since that?

DB: Countless I suppose, I tour managed “the Dwarves” for a little while, I went out with “The Gutter Twins” Greg Dulli and Mark Lanegan. I’ve been out with “the Knitters” and several times with “X” and now I have been out with Dave Alvin for several years now.

JH: So that has been a happy run?

DB: Yes and now I am doing tours with Dave and Phil Alvin so what could be better.

JH: So along the way at some point you started writing haiku’s every day on Facebook.

DB: I started that right after I finished writing the novel, I starting going a little nutty because I didn’t have a creative outlet anymore so I just started writing the haiku’s every day.  It’s a writers exercise to write a haiku every day for a year. I ended up doing it for two and a half years.

JH: I did that on Twitter for a while but lost steam somewhere along the way.

DB: I tried it on twitter but couldn’t get it in haiku form so I just kept to facebook.

JH: I just separated my lines with semicolons. I still write them on occasion but not on a daily basis but I like the form and it’s a challenge to fit something into the haiku form.

DB: I found it also, especially if you do it every day, it challenges you to find something poetic or interesting in the world every day. Regardless if I’m on the road or at home I have to find something to write in the style every day and often it’s not as easy as one would think. It makes you look for the poetry in the world.

JH: When did you start writing the novel? 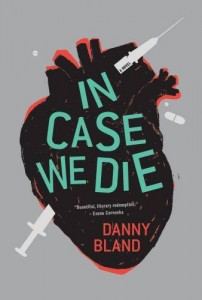 JH: Did being a musician and writing lyrics help in some capacity?

DB: Yeah I suppose so, as far as like getting up the nerve or to assume that anybody would want to read what you had to say then yes it did. They are totally different animals I suppose, lyrics and haikus have more in common than a novel. The novel is like sixty five thousand words, that’s a lot of ideas to have to put together in a space. In a lyric or a haiku you have less time to convey a thought.

JH: The time it took to put together was about three years you said?

DB: About two and a half years, something like that.

JH: So how did it get published, it’s published through Fantagraphics so was it through a friend that worked there or something like that?

DB: I was going to self publish because it was more important that the story get out there, that was my intention the whole time I was writing it.  I tried not to think about anything like publishing, promoting or marketing because it took away from my writing time, which in my line or work is a precious few minutes here and there every day.  When I was done with it and showed it to several friends and at the time Rachel Flotard was just starting to manage different bands and stuff like that so I brought her on to help me. She sent it off to Fantagraphics, it seemed like such a natural fit since they are so much a part of Seattle and the book is so Seattle-centric, so luckily for me they loved it and published it.

JH: I worked with Fantagraphics on the “Destroy all Movies” book with Zach Carlson and many other people. The reason I fought so hard to work on that and do all the extra work on interviews and articles is that I would someday like to be able to write for a living. I don’t think about being rich I would just like to be able to do what I enjoy, instead of working away most of my time for someone else’s profit.

DB: That is one of the things I liked about the “Destroy all Movies” book was the look and the entire package is just so well done, that was one of the reasons I was so happy they picked up my book I knew that they would come up with an amazing piece of art for the cover.

JH: The new book is the haiku book with your haiku’s and whose photo’s? 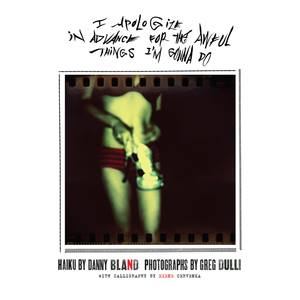 JH: Is Fantagraphics publishing this one as well?

DB: Actually Sup Pop published this one, they approached me on Facebook and asked when I was going to publish these.  I had to think about an interesting way to present these because a bunch of haiku’s on a page would not be very interesting. So I approached Greg who has a wonderful Instagram page where he puts up these photos with no explanation. It makes for great stories in each viewers mind. Greg helped me with the first reading of the novel by agreeing to read and when he was there I sort of proposed this idea for the book of photos and haiku’s. He liked the idea and then Jonathan Poneman approached the same day asking when I was going to publish the haiku’s, so everything for this book just sort of all came together in one day.

JH: Are you writing anything right now?

DB: I am working on a new novel, a follow up to “In Case We Die” which is due to Fantagraphics in a year for a Fall of 2016 release.  I also plan to do another haiku book along the way.

JH: What advice would you give to young writers?

DB:  I say write the book and don’t think about publishing or money, just do it.  If you love it just write your book and then we will figure out what to do with it.