X: It is difficult to categorize Mala Suerte’s sound. And each song is very different from the next. When people ask what you sound like, what do you tell them?

Gary Rosas: For a while there I used to say we were just a doom metal band because that was pretty much what we were known for, but we have definitely incorporated a lot more influences into our sound than just doom metal. When we first started we were more of a crossover type band and then we gradually got heavier and heavier and started writing slower and more epic songs, and we all but abandoned the faster stuff for a while. Our newer stuff still has a lot of doom to it but we’ve also sped the pace up quite a bit by going back a bit to our older style and with the addition of more thrash-inspired parts, traditional metal, and even some quite rocking moments. Basically, I guess you could just call us a metal band at this point. 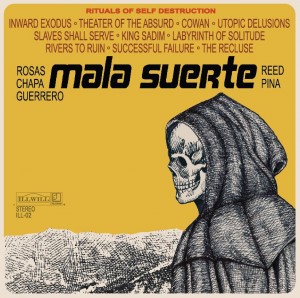 X: Tell us about your new album Rituals of Self Destruction? Which format(s) did you offer and why?

GR: The new record was released on CD on Tuesday, February 24th. Considering the length of the album it looks like it’s going to have to be released as a double LP, so we are going to go in and record two more songs which will be exclusive to the vinyl release. We’re currently working on both songs so we’re hoping to have that version out before too long. Obviously, releasing the album on CD is a no-brainer as they are cheap to manufacture and pretty much everyone has access to a CD player, but seeing as how I’m a collector myself I definitely want to see it out on vinyl as well. For me vinyl provides a more personal and tangible experience, especially when considering the artwork, packaging and overall visual appeal of the format. Of course, it will also be available digitally on our bandcamp site as well. 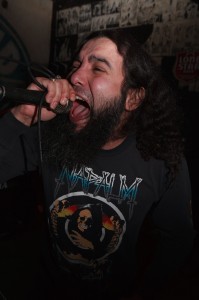 X: Are you writing all the lyrics? Who creates the artwork? What is the theme for the new album?

GR: Yeah, I write all the lyrics for the band, as that has been my role as vocalist, and I guess I’m pretty hard-headed about getting my own ideas out there. The other guys write the music and I put the lyrics to it afterwards and that’s basically how we’ve always done it.

Concerning the artwork, I’ve mostly always come up with the concepts and actual art as well, with a bit of additional work from my good friend, Frank Duarte, on some of the inserts and logo ideas in the past, and another close friend, Kevin Webb, has usually assisted me with the graphics and design on all but our most recent split 7″ with Uzala. The art for the new album is going to be a little different than what people have grown accustomed to for a Mala Suerte record, and I have to admit that I was a bit crestfallen when my guys told me that they didn’t want me to do my “usual Gary style” for this release. Due to the new line-up changes and stylistic approach they wanted something a little different that would reflect that change and asked me to come up with something a little less detail oriented and a bit more streamlined design wise. I had another idea in the back of mind about doing an homage of the cover of one of my favorite movie soundtracks and they were really taken by that idea so that’s what we decided to go with. As far as what soundtrack cover I’m talking about, you’ll just have to look at it and figure it out for yourself, though I think it is fairly obvious.

The new album is called Rituals of Self Destruction and lyrically for the most part it stems from my general negative worldview. I’ve often been called a pessimist and my lyrics are a general reflection of that. I’m not a “glass half empty” kind of guy, I’m more of a “glass broken into hundreds of pieces on the ground” kind of guy.

X: Mala Suerte has been around for well over a decade and have had numerous lineup changes. Who,besides yourself, has lasted the longest and why do you think that is?

GR: Our guitarist, David, and I are the only two original members, though he did quit for about a year a few years ago, at which point I was the only original member. I’ll answer for myself, though, I’m fairly certain that David’s thoughts regarding this matter would be rather similar. Basically, we just keep going because we enjoy creating music. Obviously, if you get into playing this type of music for any reason other than the pure enjoyment of it and the desire for creative expression, then you clearly have some seriously wrong-headed notions and you should probably just hang it up. In other words, as I’ve said before elsewhere, we’re just a bunch of hard-headed bastards.

X: What are your thoughts on the newest albums put out by EHG and Black Sabbath, as they are two of your main influences mentioned?

GR: Black Sabbath is certainly one our biggest influences, as I’m sure can be said of most metal bands, and their “13” album was my favorite release of that year. I still haven’t heard the latest Eyehategod record, though I still plan on picking that one up really soon. I wouldn’t say that they’re one of our biggest influences, even though we were quite inspired by them back in the late 90’s for sure. We probably just used them as a reference point back then for people to get an idea of the ugly and sludgy sound we were trying to create. These days our sound has progressed quite a bit since then, for sure, and I’d be hard-pressed to put some sort of firm categorization on it.

X: What else is influencing your music right now as far as art, literature, a woman, etc.?

GR: I’ve always been moved and/or influenced by the same ol’ shit: man’s inhumanity towards man, negativity, depression, and despair. The state of world affairs seems to be getting progressively worse every day and I see no sign of things turning around anytime soon, so as long as this shitstorm continues I’ll have plenty of things to bitch and moan about.

GR: My two current favorite local bands are probably The Well and The Blood Royale, though there are plenty of other acts that are certainly worthy of your time, like Curse The Heavens, Sabbath Crow, The Dirty Charley Band, Destroyer of Light, and Headcrusher, to name a few. 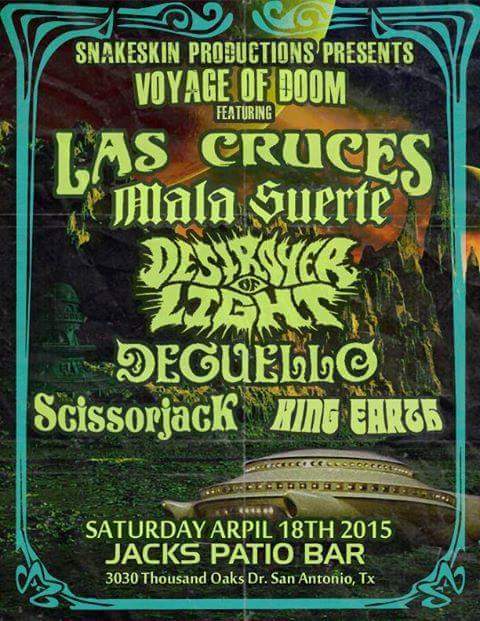 X: Are you planning a tour outside of Texas, or the U.S. in the near future?

GR: I am currently working on booking some regional shows in Texas and Louisiana and we are also planning on doing a two week West Coast tour in the fall.

X: What are your intentions for the band? Do you foresee your luck improving?

GR: We’ve got a lot on tap for the rest of the year. We’re working on finishing the two songs which will be included as a bonus on the double LP version of the new album, and we also hope to get another EP of more psychedelic and experimental material done before year’s end. As I stated before, getting out on the road is a definite priority, and after that we’ll be getting back to work on songs for the next record. As you’ve probably gathered, I’m certainly no optimist, but I intend to keep moving forward with writing and creating music despite life’s constant pitfalls. So, no, I don’t see my luck improving, but that’s entirely beside the point, isn’t it?