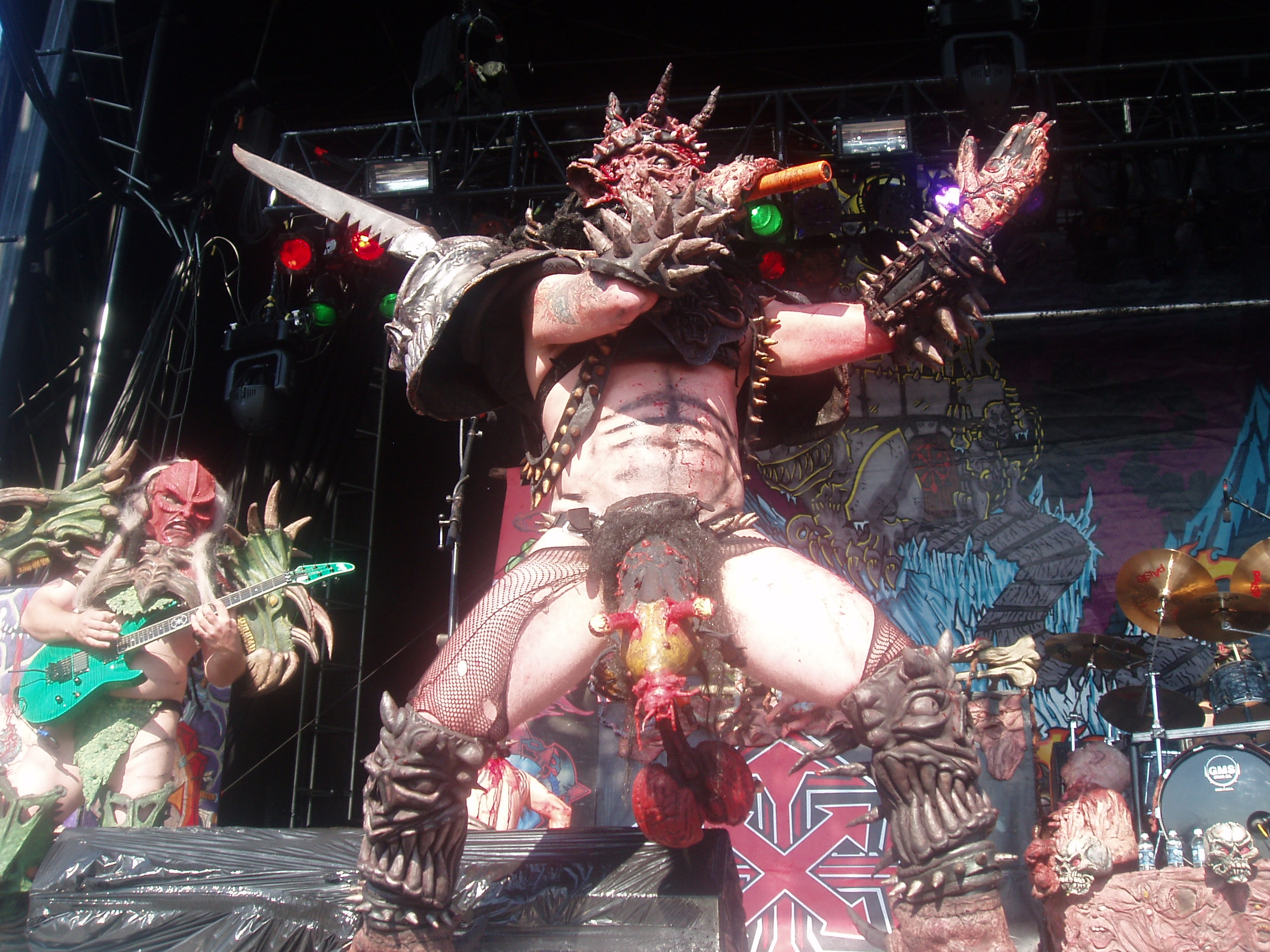 In 1991 there were lots of people who knew who GWAR was but I didn’t and neither did apparently a host of unsuspecting club and hotel owners across America. I was really curious as to who they were, so I asked my friend Justin McCoy. We got a show with some band called G-War, what hell is G-War? He laughed and said, GWAR, pronouncing it correctly, and making me feel marginally uncool, as I actually am. “They’re like KISS Transformers from another Planet on Acid times Ten“, he said excitedly. “They’re fuckin’ Rad, they spray blood all over the audience!” As I tried to wrap my Peanut sized brain around the explanation of the spectacle of a full sized 747 plane engine appearing out of nowhere and crashing into the stage suspended from guy wires, compounded by the thought of a band composed of guitar welding, blood squirting monsters, attended by a back line complement of fire dancing Female slaves, I said, “Wait just a God damn minute! You couldn’t put all that shit on stage at the same time, You’re pulling my leg!” “No,” he said, “I’m totally serious.” While I had accurately envisioned a band that would surpass KISS by using blood instead of fire, my idea was a popcorn fart in Hell compared to the Himalayan theatrical accomplishment that was every day business for GWAR. The day finally arrived for the show and I said we gotta see this, so we went down to Liberty Lunch at about the time they were set to unload this Box Truck full of stuff, and more stuff, and more stuff and it just kept coming. Jezzus! I said, “Look at all this shit! This is gonna be great!” Then the band finally got there and piled out of this old Blue Bird bus one after another each one looking grosser and more disheveled  than the next. Seventeen of them in all as I can recall. After meeting Dave and feeling thoroughly confused about who was who, or who was what, as Dave gave us a rundown of the characters we were invited at some point to look at what was on that bus. I was excited to see until I realized it wasn’t so much what I was going to see as it was what I was going to smell. It was repellent! Like those sneakers you had to throw out that time you wore em’ all summer with no socks and it almost made your Mom vomit? till she screamed at you, “Throw those away!” Ya, that’s exactly what it smelled like. Now take that sneaker put on your head and run around under the stage lighting until you work up a sweat; which isn’t hard when its one hundred and twenty degrees at 90% humidity, and you start to get an idea of why Oderus is Oderus. In case you don’t know the horror of Gwar is multidimensional, smell just being a small facet on a very large disgusting diamond. While there were several people instrumental in conceiving this idea that was GWAR, it was always obvious that Dave Brockie was the glue that held it all together at certain critical points. Dave was driven and energized when anyone else was tired. You really couldn’t say no to him. He was that kinda guy, and I’ll reserve any further obsequious flattery for another time. This is an article about stories and the first one I can think of was the Crown Plaza Hotel in New Orleans, and how it came to pass we all ended up in a four star hotel. I really actually have no earthly idea who the poor bastard was that was naive enough to book us into such a beautiful, opulent hotel but I sure appreciated it at the time. The suite was filled with period furnishings such as Queen Ann chairs covered with crushed blue English Velvet and a large Chippendale hand lacquered dinning table. Those were the pieces that come to mind primarily due to my shock and dismay the following morning at there condition. The table was eclipsed with beer bottles, cans and cigarette butts and  the chair was smeared with GWAR blood; at  the time Gwar blood was made out of a insidious seaweed concoction that was entirely indelible and an affront to domestic engineers across America. Brockie and I were conducting a last minute search of the room for left behind articles of clothing etc. affectionately dubbed an idiot check, fully aware that we needed to make haste lest we be caught red handed (no pun intended), when a smartly dressed man I can only assume was the manager appeared in the doorway. I could tell that he was entrusted with some measure of responsibility by the way his eyes began to bulge out, and his jaw immediately dropped then his hand sprung up to his face in a comedic fashion the way only a gay man can do while simultaneously uttering a girlish cry of fright. It was a priceless moment I’ll never forget. We politely thanked him for the hotels’ hospitality as we ducked out the secondary entrance to the room and hauled ass to the elevator. I wasn’t responsible for the mess but I couldn’t get out of there fast enough. This scenario seemed to be relived over and over again in a variety of  not so chance encounters with unsuspecting proprietors across the country. After all, no one suspects the Spanish Inquisition! Nor do they suspect to be bathed in a sea of simulated bodily fluids spewed forth by an onslaught of  behemoth  monsters unless you’re keeping company with Mr. David Brockie.