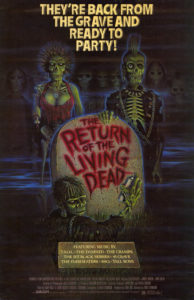 Okay so all you film fanatics, zombie freaks and old punk rock people, Scream Factory has FINALLY released a collectors edition on blue ray of “Return of the Living Dead” with the original film score intact. Break out the beer and have some friends over because, “Do you wanna party?” This film has been available for years on VHS and DVD but due to copyright problems with IRS i.e. Enigma Records it has had a sub par score that cut out all of the songs from bands like T.S.O.L, 45 Grave, The Flesh Eaters, The Circle Jerks and more were cut out. It’s still a great movie that captures a distinct moment in time but without the songs it was sort of like watching say “Singing in the Rain” with all the dance numbers cut out. It’s also a historical moment of the “Zombie” sub genre, it’s the first movie in which the zombies wanted brains, and not just the flesh of the living.

It is overflowing with extras, there are two disc’s and the movie only runs 1 hour and 31 minutes. There is a great bit in the extra’s that is not only about the songs in the film it sort of goes into the whole musical mind set of the early eighties. There are ton’s of interviews with people like Dinah Cancer, Greg Hetson and Chris D to name a few. If this particular kind of music isn’t your thing and you just crave zombie’s 24/7 there are great features on everything having to do with the movie. There is also a really great feature on horror movies of the eighties.  This is a DVD you can be proud, excited and happy to add to your DVD collection. I can remember going to see this film many times at the theater and it was a regular on Night Flight. So get a little nostalgic and check out the new definitive edition of “Return of the Living Dead.” 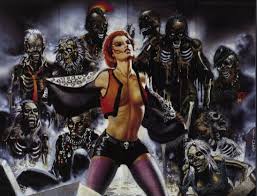 This is the direct connection to the manufacturer website, you can also purchase it at Best Buy or Amazon.