The Dwarves – Take Back The Night Review 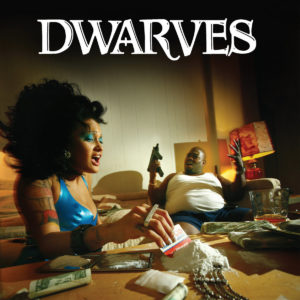 From the middle of the 1980’s to present day the Dwarves have released a lot of music and played even more shows. From pop punk to garage rock to hardcore the Dwarves have always been a force to be reckoned with. Melding multiple styles and concepts while always staying sleazy and fresh. The Dwarves lyrics are the things of nightmares for the Tipper Gores of the world, but they just may be one of the purest forms of punk rock still alive in the world we live in as of 2018. The Dwarves are one of those bands that can write songs in different styles, but keep the spirit of the band we all know and love alive. After many releases in 2018 are the Dwarves still the deviant dirty punk rock n rollers we have known for so long or have they decided to clean up their act and get with the times? I think most of you know the answer to that, but let’s dive in.

Forget Me Not kicks off the album with Blag declaring “Fuck School and Fuck You Too” over a mid-paced punk rock guitar part. The vocals switch between Blag and other members as they bark out lyrics. The song is about leaving a lasting impression on someone in a Dwarves kind of way. The chorus has more of a surf rock vibe with Blag harmonizing and singing the chorus. Overall good song to start the record off with.

City by the Bay is one of the faster songs on the album and is pretty much Blag’s fuck you to the super PC crowd and apparently the city of San Francisco. High rent and Super PC topics according to Blag get checked all through the song. One thing I really love about this song is that it sounds like something that could have come off of their album Blood, Guts, and Pussy. Short, fast, and to the point.

The Devil’s Level starts off with a solo and a slower guitar build up that leads into a faster paced punk song with some serious rock n roll sounding riffs. Blag does the singing on the song with the screams handled by other members. The song is of course about doing evil and being on the devil’s level. The chorus has Blag singing melodically with the harsher vocals in between. The song isn’t super aggressive, but has a cool laid back feel to it.

Everything and Moore is a straight forward aggressive punk song that doesn’t even last 45 seconds, but they cram in a lot with the time they have. The song is about living wild and lawless. Again this song reminds me of their older stuff that was super short. Fast and to the point.

Take Back The Night is one of the anthems on this album that I can see being a great song to play live. The guitars have a rock n roll heavy punk sound. The lyrics contain references to violence and sex which are very common themes among the Dwarves songs. They throw in some solos towards the end while keeping the sped up pace of the song. The song seems to invoke a bring the danger and bring the evil back mantra to it. Dig the guitar parts and the lyrics in this song a lot.

It’s You I Don’t Believe is a rare somewhat political song as the Dwarves normally could care less about traditional politics. The song is more of a hardcore punk song about the distrust of politicians with other members handling the vocal duties completely. There is no melody in this song and it is fast and in your face. All the vocals are screamed over the crushing guitars and this is probably one of the most aggressive songs on this outing.

Here’s Looking At You is Blag’s ode to being the creepy neighbor staring at the house across the street and jacking off to the hot new neighbor that just moved in. The song has Blag singing more and the guitars have more melody in them as well. The guitars in this song have an evil surf rock sound to them that go along with the creepy lyrical content. Another great example of the great music and fucked up lyrics these guys pump out.

Julio is probably the most pop punk song the album has thus far. Very Ramones sounding in my opinion. I don’t know exactly what the point of the lyrics in this song are, but there is sex involved and Julio. It has a very sing a long sound with twisted lyrics like a razor blade in your candy bar.

Dead In My Dreams has a pretty standard punk rock guitar sound as Blag sings about dreaming of being dead. As morbid of a topic as this song is it is pretty straight forward and catchy. Throw in a dead celebrity reference and some of the reasons why he is dead in his dreams and you get the gist of the songs lyrics. The guitars again have a little rock n roll sound to them even though they are sped up.

Get Away is probably one of the slower songs on the album and another song that clocks in at under a minute. The song plods along as Blag lists reason’s why the people he is singing about are too clean and pure to be around him. I enjoyed that they made a song about things they don’t like that are good, pure, and clean. All things the Dwarves and most of their fans obviously detest.

You Turn Me On is the flip side of their last song Get Away. In this song Blag sings about all the depraved things that turn him on about a certain person. Blag sings you turn me on the entire song while another member screams about all the fucked up things that turn on the Dwarves. The song is mid paced and lasts about a minute. Like the last song pretty straight forward punk guitar work.

Nowhere Fast picks the pace up from the beginning and has Blag singing about being a career fuck up and going nowhere fast, but still being around and doing what he does. The chorus has a melodic tinge to it. Great song about being a fuck up and loving it. The guitars gallop through the whole song and give it an edge.

Safe Space is another song attacking the extreme PC culture of today’s society. Again the lyrics attack what Blag considers to be a problem in the current punk scene and beyond. It is a more experimental song with sound clips layered in on top of the guitar and someone yelling “This song is a safe space” over and over before Blag’s lyrics and vocals make the space anything but safe. The guitars are pretty simple, but heavy and fast.

Trace Amounts is another really happy sounding song with very dark subject matter. It is definitely more on the pop punk side of things. The song follows the story of a girl who starts using cocaine and hanging with the wrong crowd. She eventually overdoses on cocaine and when they find her body – you guessed it – they find trace amounts of cocaine. The Dwarves have a way of taking the darkest subject matter and making happy pop punk songs about it and while I am not a huge pop punk fan I love it when the Dwarves make songs like this.

Down and Dirty is another song about the sexual preferences of the Dwarves. It is a very short and simple song. With a few lyrics in between the repeated chorus of “I want it down and dirty”. The guitar has a very basic punk sound and the song is over after 45 seconds.

The Giver is the closer of the album and it is a duet between Blag and Stacy Dee from Bad Cop/Bad Cop. It is somewhat of a love song gone bad between the two as they go back and forth between “I gave you the clit” and “I gave you the dick” with both exclaiming “Don’t blame me because you got tricked”. The guitar riffs again have more of a rock n roll garage vibe to them. The sleazy punk rock feeling mixes well with the one night stand lyrics.

Even though the songs were more varied and a lot longer than most of the songs on Blood, Guts, and Pussy the song length and some of the songs really remind me of that album. I feel like a lot of these songs were shorter compared to their last few releases, but the Dwarves are masters of making shorter songs feel a lot longer than they actually are without feeling forced. This album has many different sounds like a lot of their more recent releases. I feel more of a rock n roll/garage rock vibe on this record compared to their last few. I know the Dwarves are comprised of multiple members and I feel that adds to the diversity of the music they put out in addition to having one of the most unique vocalists in the punk scene today. If you like most styles of punk rock and don’t mind dark subject matter check this album out.

For more Dwarves news and merch check out the link below:

This entry was posted in LP/EP/Single, Reviews, Uncategorized and tagged Dwarves. Bookmark the permalink.