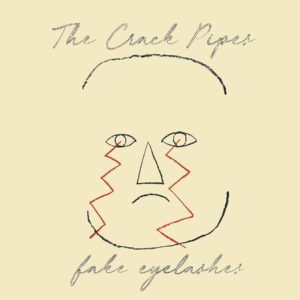 With the Oblivians seemingly settled in Memphis and sporadic at best, The Crackpipes are the next, best hope for white-boy blues-based garage rock in ‘Merica.

God help us all…

And after nearly 30 years of bearing the most awkward band name on any family friendly garage-centric show, the Crackpipes prove they can with “Fake Eyelashes.”

The record opens with an eponymous waltz that shows that the Rev. Ray Patrick Colman can sing and be sensitive as well as bring down the fire and brimstone that is required to just be heard over his band. When will they invent Bluetooth for the larynx?

Drawing from a pot-pourri of Americana such as rockabilly, southern-fried psychedelia, delta blues and even the freaking Georgia Satellites, The Crackpipes have birthed a record that would be impossible to place on a chronology chart if not for the digital time-stamp that is invariably on EVERYTHING these days.

Full of puns, bad decisions regarding the opposite gender and a condemnation of the unforgivable abuse and murder of a giraffe (or maybe it’s just about a giraffe – I don’t know. I’m still mad at that Papa John’s bitch), “Fake Eyelashes” has something for everyone.

As a bonus, for those of you who want to know what the letters in “Sha-zam” stand for, the nerds in the Crackpipes gotcha covered with a song called just that.

One of the top five Austin records of 2018. Seriously – this shit would rip even without the Grant Hart-penned “You’re the Reflection of the Moon on the Water” rave-up that closes it.

Oh, and it also has classy art and hoity-toity stuff like that courtesy of former Motard and current Surfbort guit-man David Head.