Texas Independence Fest 2015 was just as I expected…a metal binge weekend in a cozy venue smelling of whiskey and weed, filled with familiar faces. Empire Control Room provided atmospheric options and a divey charm compared to those massive open air fests. The ones where those trying to escape through the more vile brand of music are engulfed in a sea of strangers quarantined to a yard.  The touring musicians I spoke with seemed relaxed in our laid back metal community. With the artists’ guards down, and their bodies a little overheated, their performances felt that much more real. 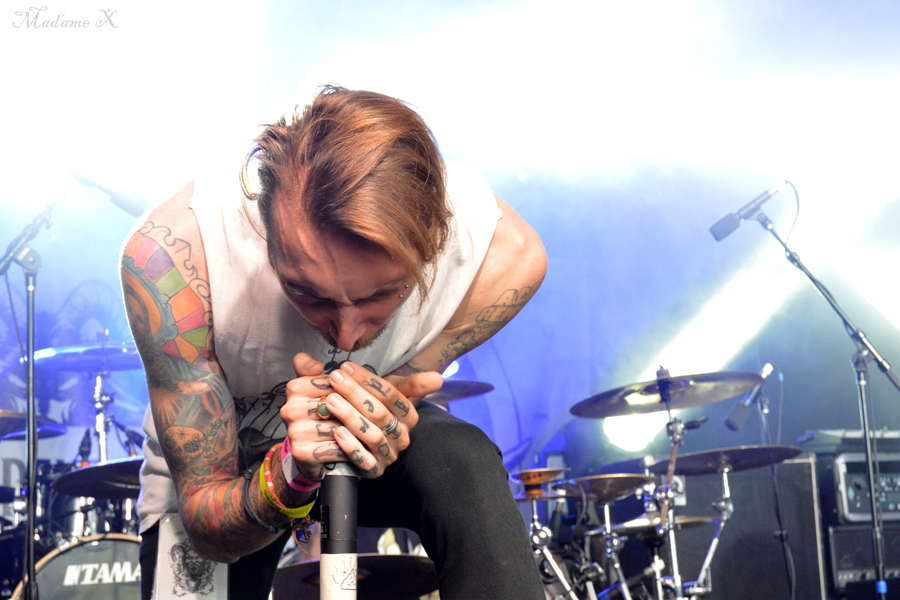 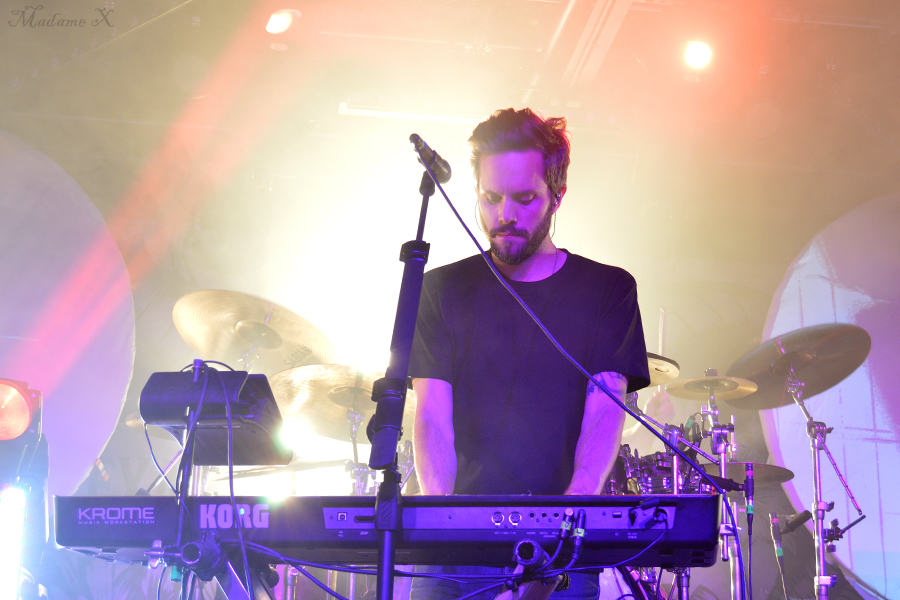 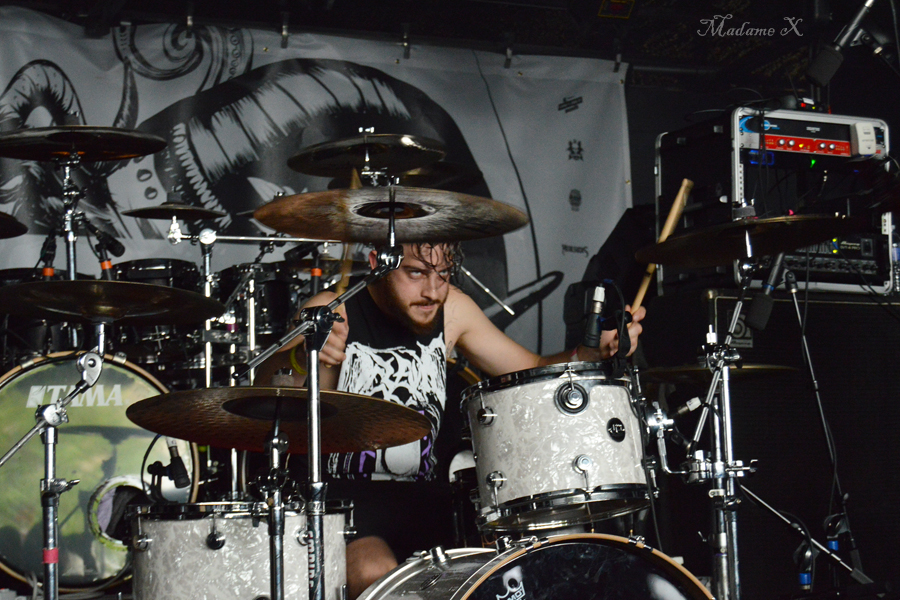 While researching the lineup pre-TXIF I observed that half the bands had members only a few years older than my children. Aging has made it harder for me to relate to the music the kids are putting out these days, but part of my quest to remain young at heart is being open to change and I intentionally went into TXIF with this in mind. I noticed the musicians of my generation (Gen X/Y) and the previous (Baby Boomers) were taking the youth under their evil wings. For example, it was clear to see Max Cavalera’s support for his son Zyon and his band Lody Kong. And the youth surprised me with their talent and professionalism. Vital Remain’s 19 year old guitar player, Dean Arnold, put many of his elders to shame with his technical mastery of the guitar. I talked with a member of Vale of Pnath who was currently on tour with Vital Remains.  He expressed his surprise at being asked to tour with an established band.  Based on prior judgments against his band member’s skinny jeans and ear gauges, he never expected to have this opportunity. And on that note, Vital Remains put on a captivating show despite Brian Werner’s broken ribs recently sustained on tour in Chile. God’s wrath didn’t stop the controversial Werner’s irreverent onstage bible shredding at TXIF either. 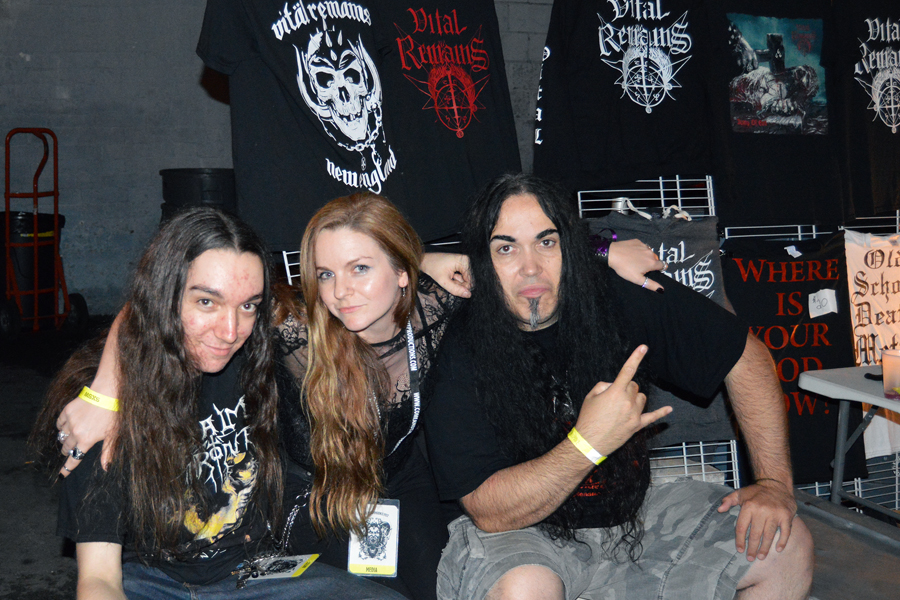 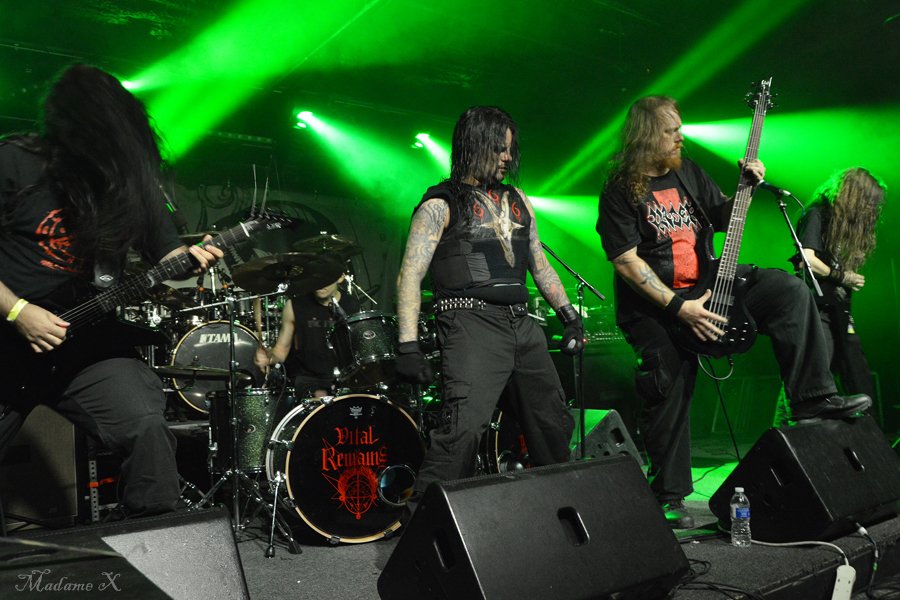 Aside from my growing appreciation for the millennial’s noise at TXIF, there was plenty of the old school metal I was accustomed to.  Sworn Enemy from Queens, New York, has been around since 97’ and captured the urban punk/thrash rebellion of the 90’s. Their riotous sound incited violence as a fight broke out in the pit between two young moshers during the middle of the set. Vocalist Sal and a purple haired fan had to reprimand a rowdy beer hurling hellion who was obliviously ruining the vibe for others. Not to defend this bad boy behavior, but it can be difficult to maintain one’s composure when “We Hate You” is chanted amidst the muggy drunken mania that is TXIF.  In contrast, evident by his jump kicks across the stage  bass player, Mike Pucciarelli was possibly in better shape than many of the young’uns. 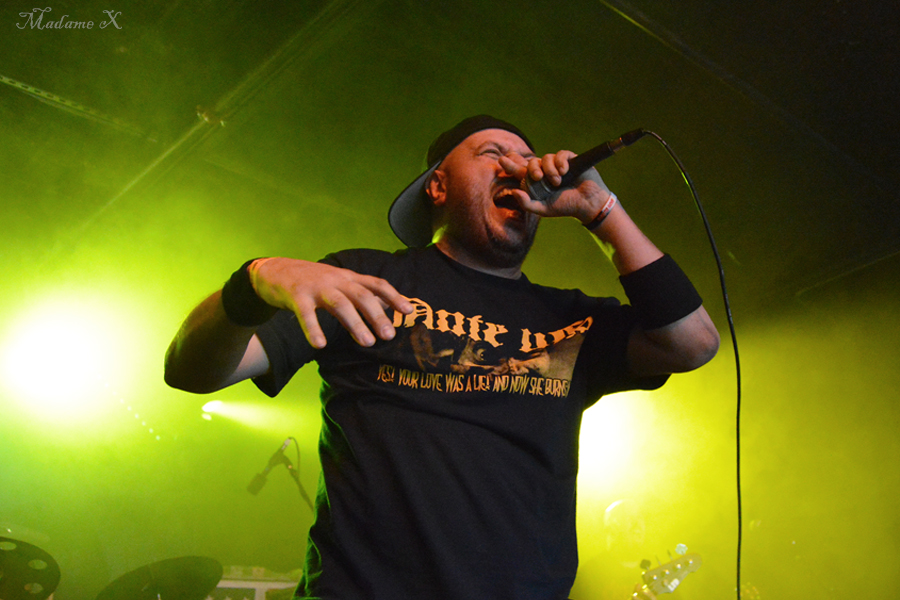 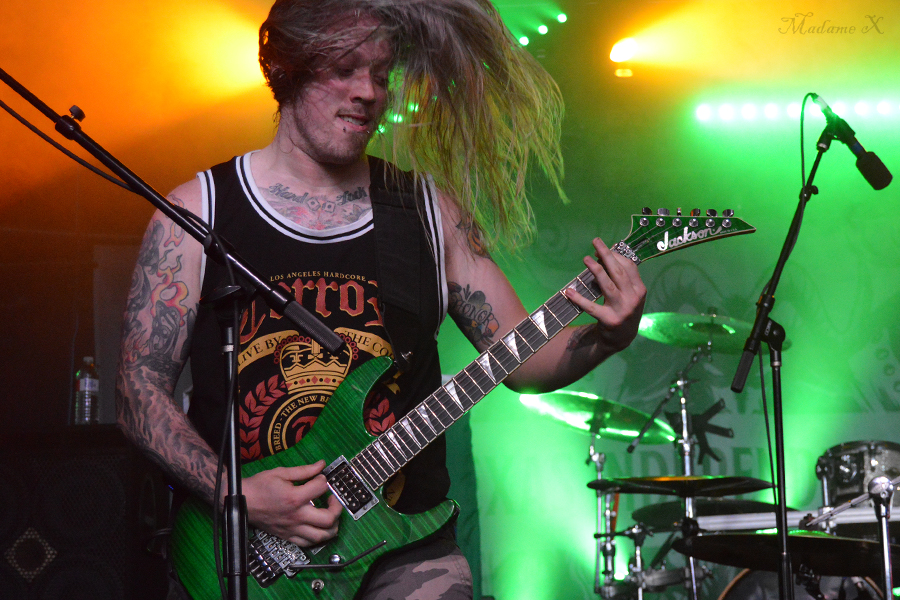 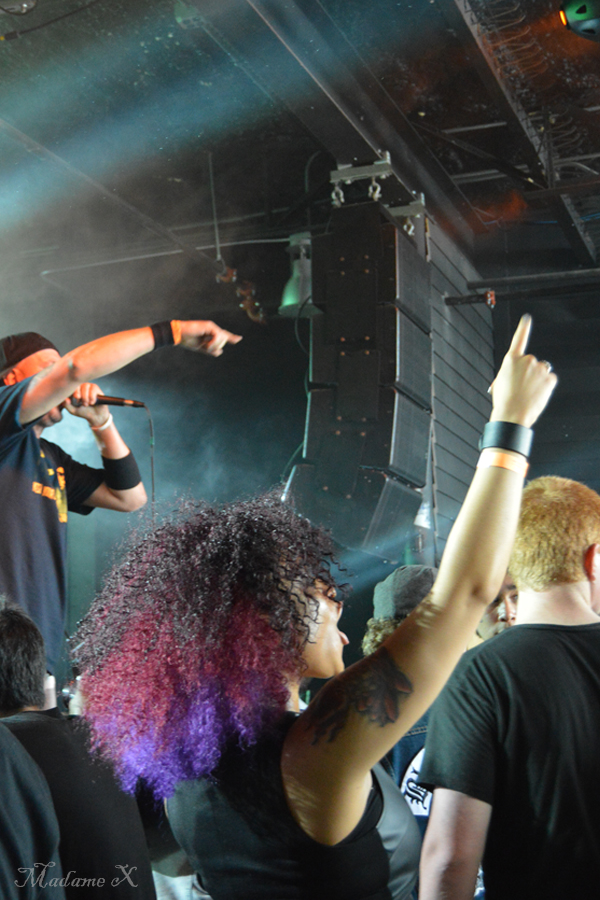 Passing the torch in another way were Montreal’s The Agonist with Vicky Psarakis, Alissa Glutz-White’s replacement. Despite a consistency in the gender of both lead vocalists, there was an undeniable difference in performance. Vicky’s voice is both pleasant and powerful and she shared the spotlight with the men of The Agonist. I always appreciated the the female attention domination more prominent in Alissa’s performance, but the other members are incredible musicians and they brought it to the forefront at TXIF. 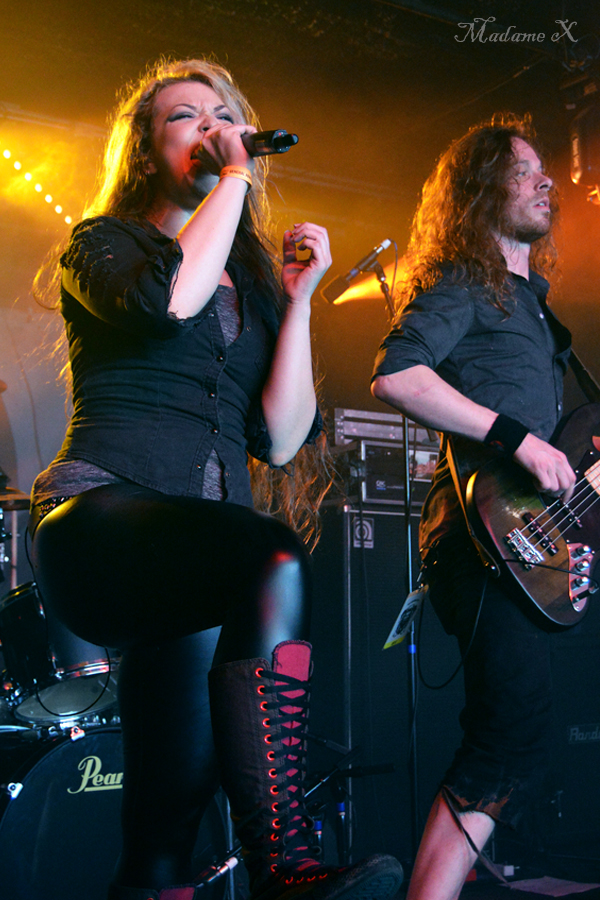 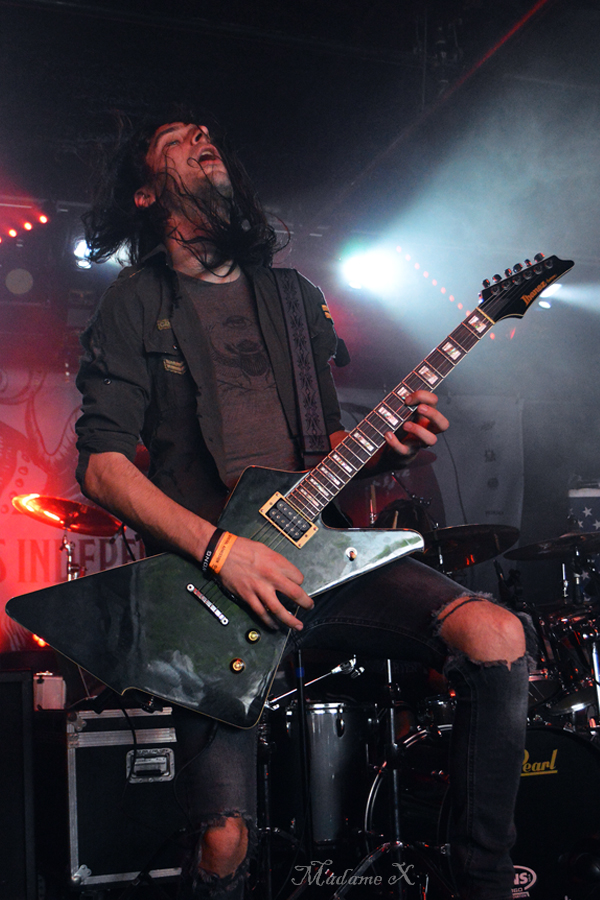 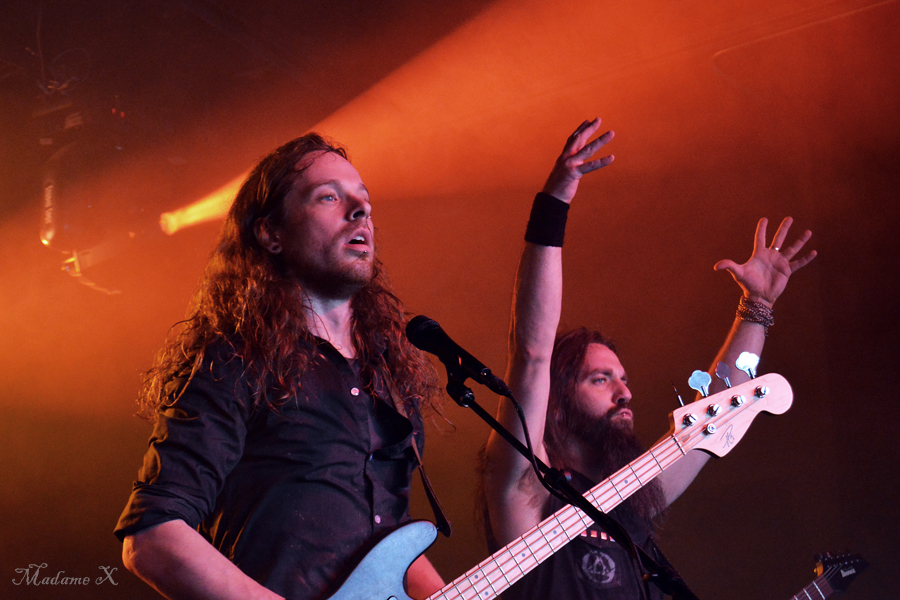 Death Angel merged past and the present as well as represented a slew of ethnicities. They looked modern and edgy on stage despite their 80’s power metal sound. With the blue and purple lighting, black and white guitars and long hair swirling, their performance was both hypnotic and nostalgic.

Cavalera Conspiracy, (the reunion project of the Cavalera brothers Max & Igor following the breakup of the original Sepultura,) headlined Sunday night of TXIF ending the fest on a climax. Though the intentionally gritty sound of their latest album Pandemonium received mixed reviews, their sound was clean and commanding at TXIF. CC covered Black Sabbath, Motörhead and to the masses’ delight, Sepultura. “Torture” and “Warlord” were among the classic CC songs heard. Max appeared pleased to be back on tour with Igor reuniting the Sepultura bloodline and sporting his signature coordinating camo. 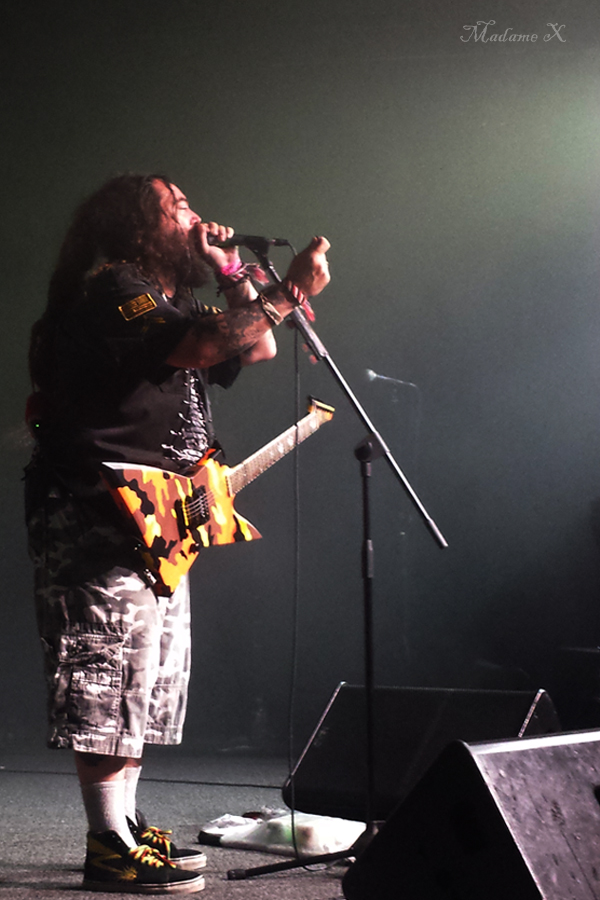 As always it was good to see our local bands (Brink of Disaster, Bury the Rod, Critical Assembly, Fear Control and Dead Earth Politics to name a few) included in the line up and in the audience, reminding us of good times with good people. 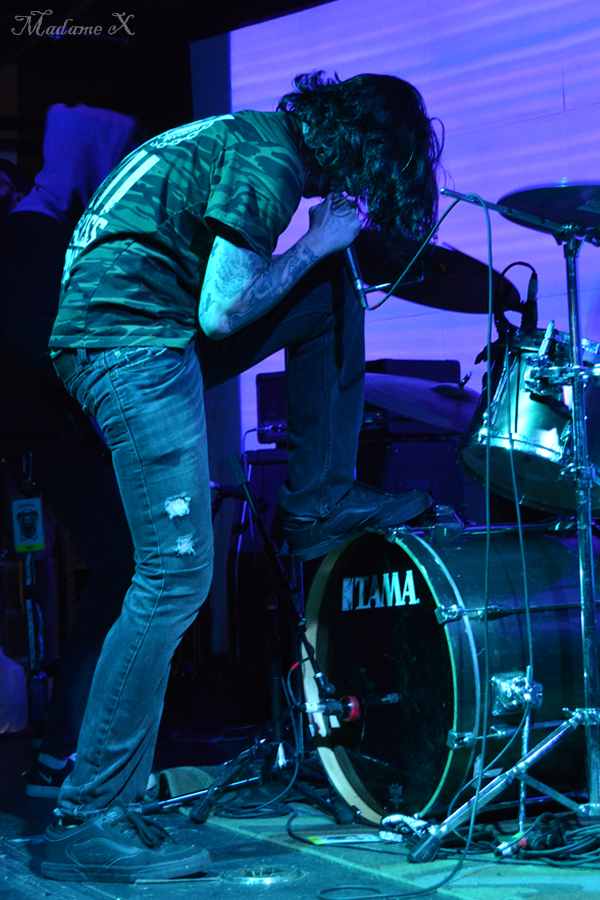 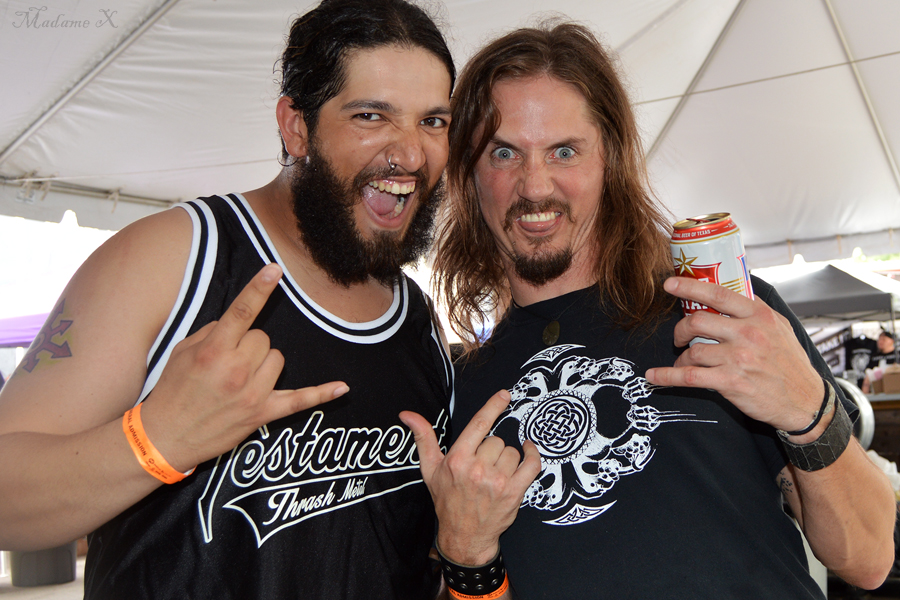 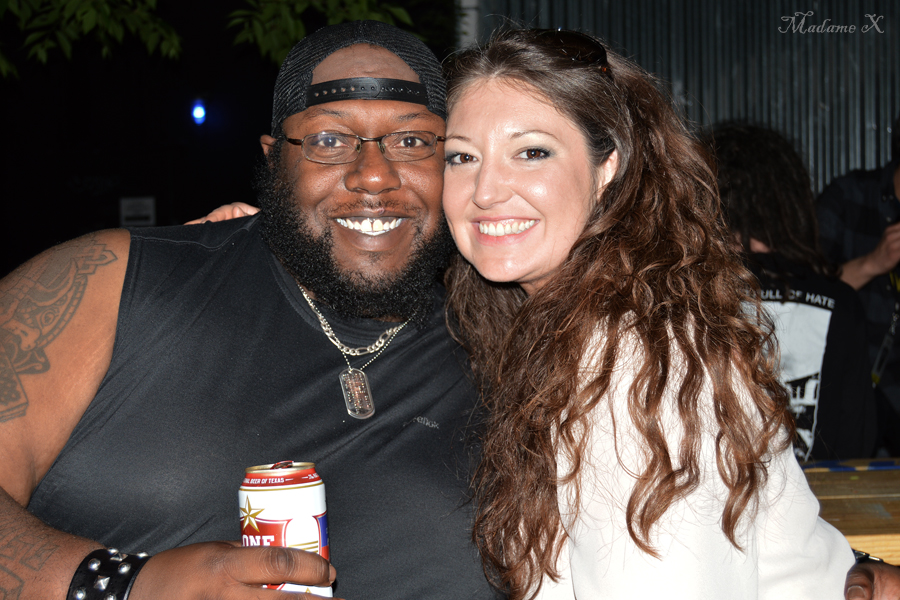 Other bands that left an impression were War of Ages, Wretched, Boris the Blade and Allegaeon for their intensity levels and/or technical skill. With so many bands in just three days, there was something for everyone, from the metal geek to the thrasher to the deathcore kid. There was some confusion over whether or not Pepper Keenan would be joining Corrosion of Conformity on Sunday evening, even though the flyer advertised the band as “Corrosion of Conformity – Blind.” Either way we got our fix of COC. 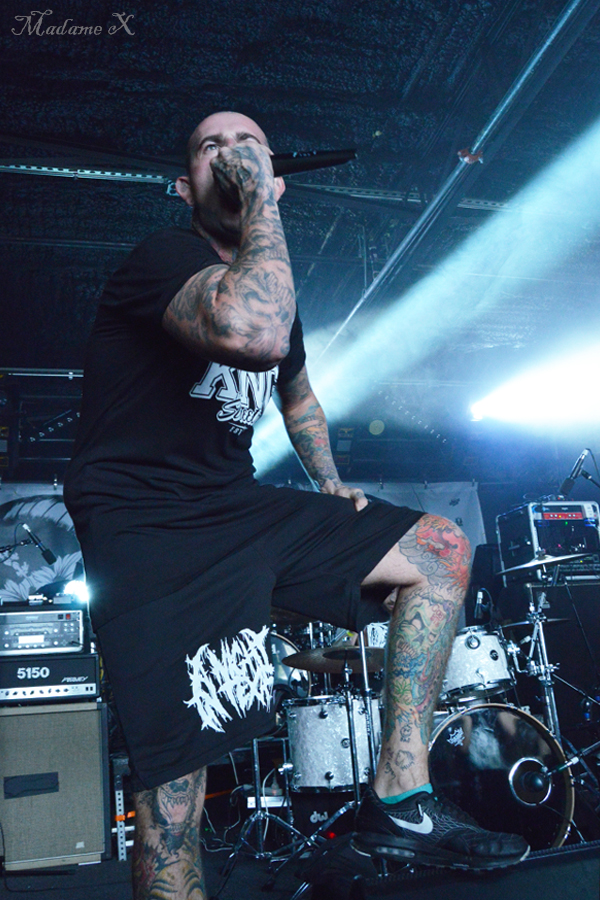 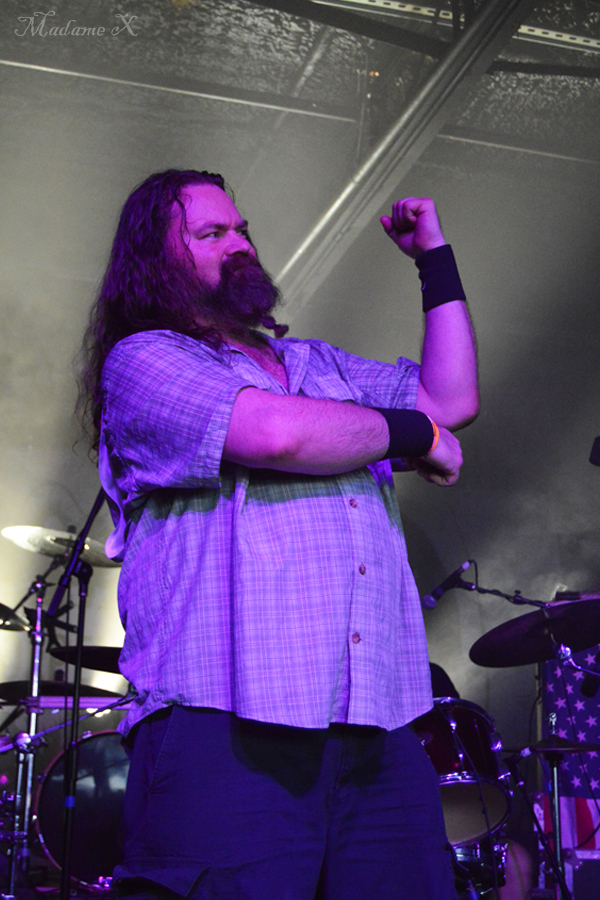 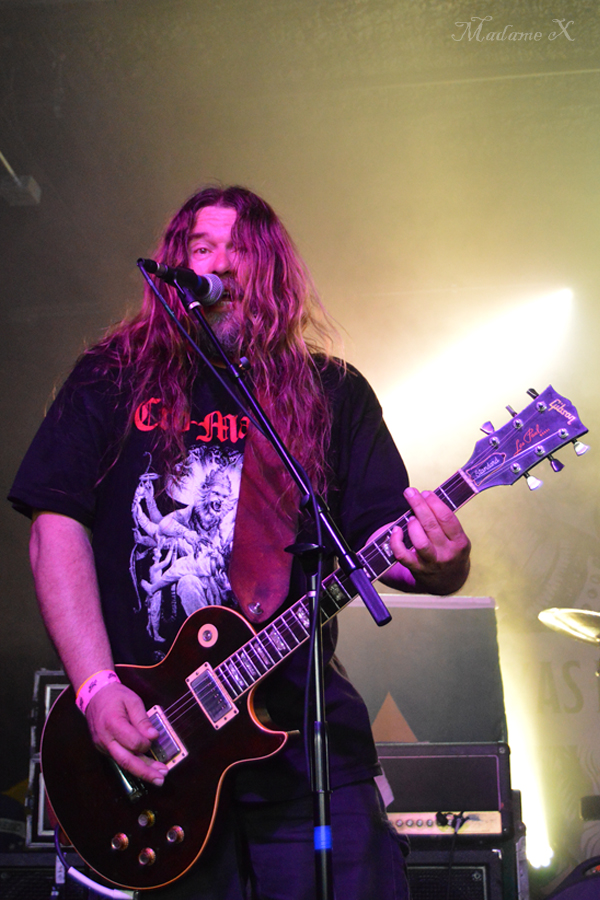 The unintentional lesson of this year’s TXIF that stayed with me was to embrace the inevitability of change.  Change through which everything eventually circles back fresher than before but with a dose of the past. The outcome was that I had a damned good time. Every year I can’t wait for Texas Independence Fest and that has become a tradition. 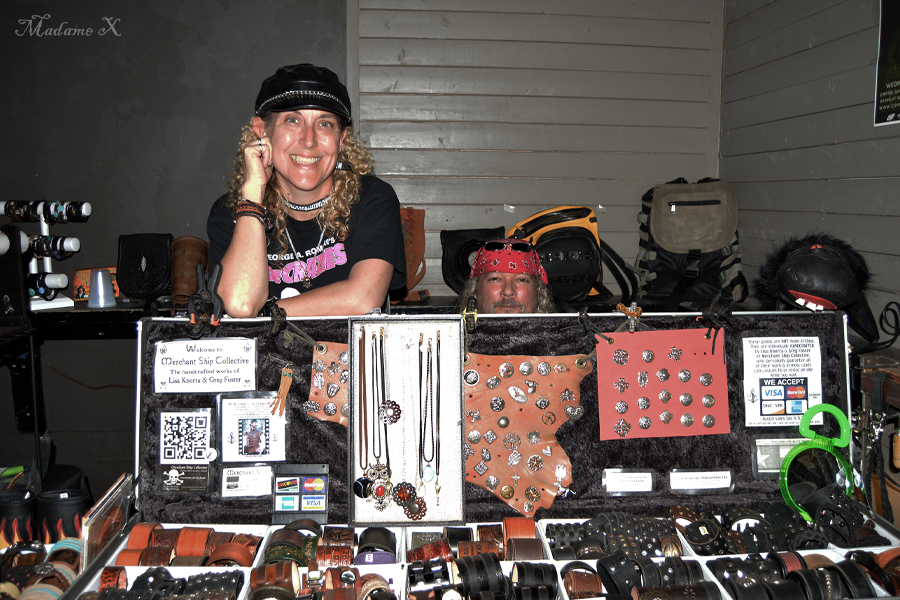 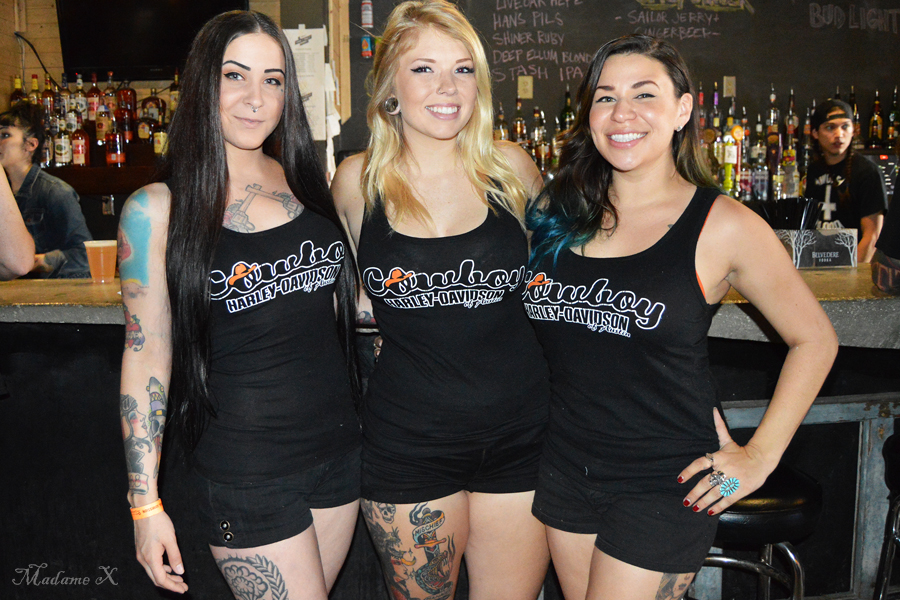 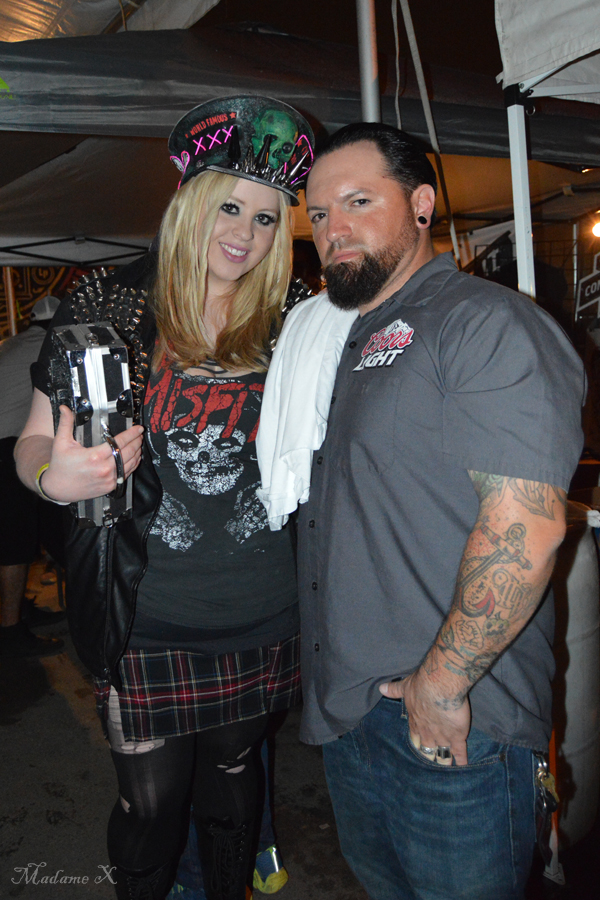 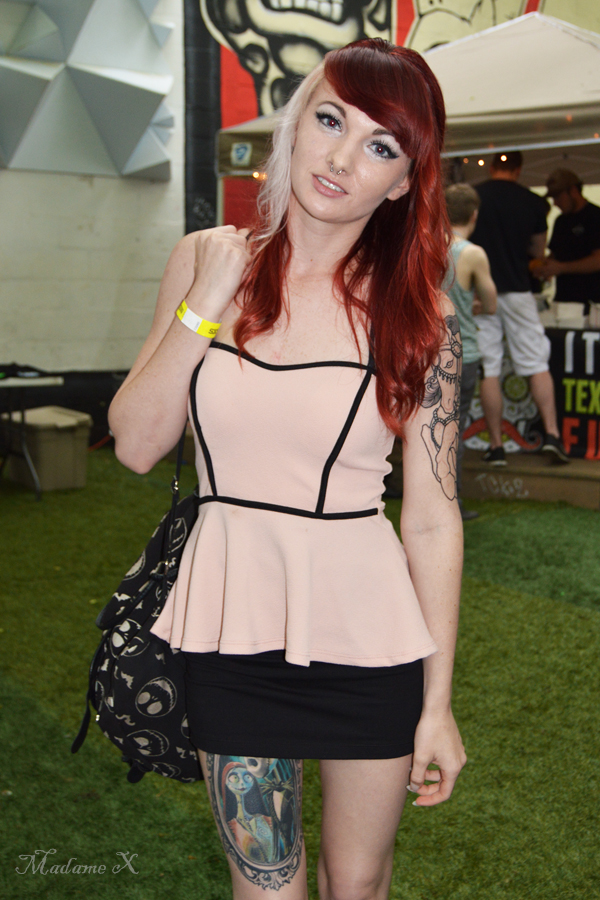 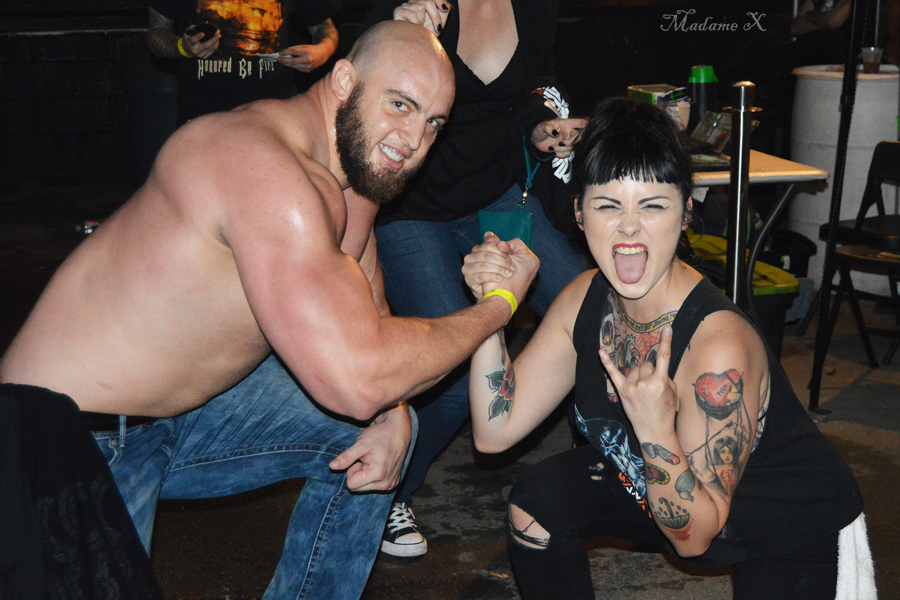