Posted on September 10, 2014 by RankandRevue

An Interview with Matt from Slave Pit Inc. 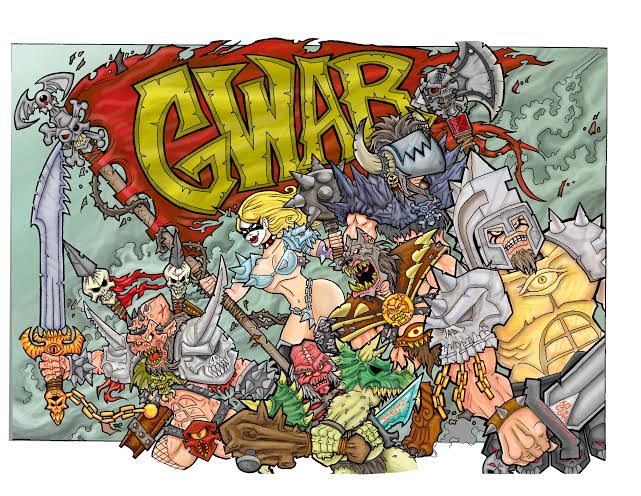 WW: You have been involved with Slave Pit since the beginning, correct? How did you hook up with the GWAR guys in the first place?

Slave Pit: Well 1 was in 7th grade  when GWAR started in 1985.  I joined in 1990 when I came down to Richmond Va. to go to VCU’s art program. I dropped out very quickly to the gasp of my parents but was soon in the depths of the Slave Pit doing art, making props and helping on the movie projects we had going on in the 90’s. I hooked up with Don Drakulich in the late 80’s going to the shows . I met Hunter Jackson as well and we became friends when I came to Richmond to go to school. At first I just helped him in the Pit on props and learned what I could . We mainly did comic book projects together back then, but slowly I became a member of the band and was working  everything from the mail order department  to the prop making teams. We wear a lot of hats in the Slave Pit, just like Hunter’s motto, “Don’t talk about it, do it!” Everyone has to take on a lot of different roles in this band.

WW: Can you describe (abbreviated version) a day in the life of a GWAR slave?

Slave Pit: Well in the stage version you are there to serve GWAR’s every whim …. much like in real life (lol), but the slaves serve the Scumdogs which are the band of exiled space pirates that are the mighty GWAR . In real life everyone here gives up a lot of the life to be here. We have a lot of talent creative people that have been in GWAR and it would not have happened if we all did not love what we are doing. 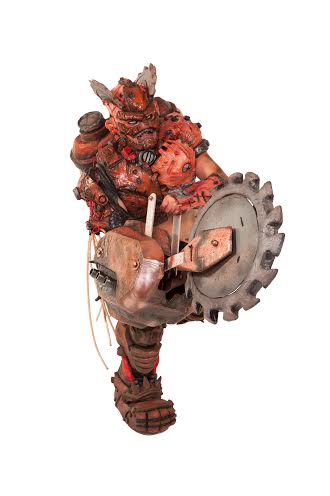 WW:  So, do you guys design and build the costumes?

Slave Pit: Yes. That is one thing I always tell people is that when you see a GWAR show or listen to a song or read a comic, all that art and music is created by the Slave Pit .We have always had a design process that goes into the next record and show that starts with us joking around most of the time. We talk about the ideas, then draw it up, and then find the best way to make it work for our show.

WW: What are the costumes made of? Has it changed over the years?

Slave Pit: Most of them are made of rubber, but it was not always the case. Back in the 80’s most of the props where made of rock putty and foam and/or cloth and wood glue. Rubber came in a litlle later. The props that where used back then where from a movie idea Hunter had call Scumdogs of the Universe. Dave Brockie was in a band at the time call Death Piggy that practiced in the same work space that Hunter had (OG. Slave Pit). The two guys met and smashed the ideas together with all the creative people that where there at the Richmond Dairy Build, aka the Slave Pit, and GWAR was born.

WW: Who decides who gets executed onstage?

Slave Pit:We all do! We throw out ideas, we yell ,we scream , cry and then hug it out.   Bob Gorman, myself and Dave will sit down after that and do production drawings and budgets for the builds.

WW: When did you first start using the blood machines? What is the GWAR blood made of?

Slave Pit: Well Don was the first to intro the spew into the show. He had an arm rip that had a hot water bottle attached to it under his real arm and he pressed the blood out of that. That was in 86. Fast forward to now and after a lot of trail and errors, we have 3 to 4,  33 gallon tanks of blood with 3 fire tanks filled with other colors. Most shows we go through 100 gallons a night. The blood that comes outta the tanks is water and food color. The blood we use on stage is water, food color and carrageenan which is a seaweed product and a food thickener. It makes the stage blood look real, and there is not sugar in it so it is not sticky .

WW: How have the blood machines evolved and been perfected over time?

Slave Pit: Chalk it up to trial and error. Scott Krahl is one of the main guys who has worked on it over the years. 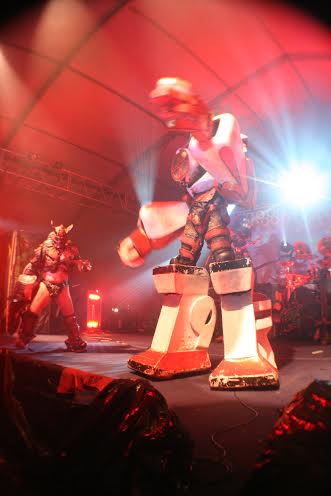 WW: How have the costumes evolved and been perfected over time?

Slave Pit: Over the years the materials have changed from cloth and glue to rubber and fiberglass. The design of the characters themselves has changed by the people that have worked on them … GWAR is a group effort. We all end up pitching in on everything. At this point in GWAR’s timeline Bob and myself are the art directors  in the band.

WW: How do you spend your time when not on the road with GWAR?

Slave Pit: Most of the  time I work on other projects like comics. In the past few years I paint GWAR art on the drum heads that Brad Roberts (aka Jizmack the Gusher), our drummer uses on stage. When I’m not doing that I hang with friends, see the sights of the cities we are in, then watch a lot of movies….lol.

WW: You said that you’ve had approximately 9 concussions through the years. Did these all happen onstage?

Slave Pit: Duhhh, yeah. Me have lots of hits to my brain holder… I have gotten injured quite a bit over the years, we all have, but most of them happen because other members of the band forget there is a real person in there, not the monster. A few of them have been just work hazards, like the time I slipped in some blood, flew into a metal grate, cut open my head and passed out later. I have had broken ribs, back problems, but all you can do is just keep going. The show must go on. I had pneumonia and missed 2 shows cause I had a 104 fever and was coughing up blood…but i stayed on tour. We are a bunch of frakking pirates! 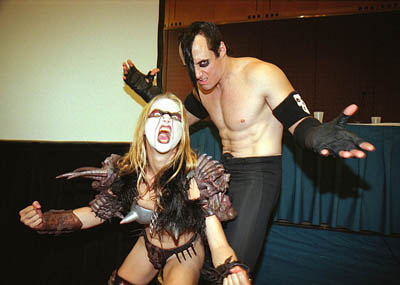 WW:What are some of the dangers of being a sex slave?

Slave Pit: Ruptured butt holes and atomic AID’s (lol) ….. not sure with out Slymenstra Hymen around how much sex slaving there is these days!

WW: What are some of the perks?

WW: Are you guys still doing comics to go along with the GWAR saga?

Slave Pit: Yeah for sure. At the moment, I’m working on a retelling of our whole mythos. I am trying to get it done for 30 years of GWAR in 2015. I would like to have it put out by a  company like Image Comics or Darkhorse. I am trying to work the music into it as well, hopefully as a full color graphic novel, a handbook of GWAR. Keep your fingers crossed.

WW: Who designs the artwork and comes up with the story lines for those? Or is it a collaborative effort?

Slave Pit: It has all ways been a collaborative effort. There has been a lot of talented people here that have added to the richness of GWAR. I do a lot of art direction these days. I will do thumb nail drawing of ideas and bring then to the group for a jam session, then go back to the drawing board to finsh up the approved idea. A lot of times I will come to the group with a idea and they will let me run with it, like the design of the new Scumdog, Pustulus Max.

WW: What mediums do you prefer working with?

Slave Pit: I love all forms: sculpting to mold making to working with clay, drawing, painting and working on the computer. If you can use it to create things with it…I will use it. 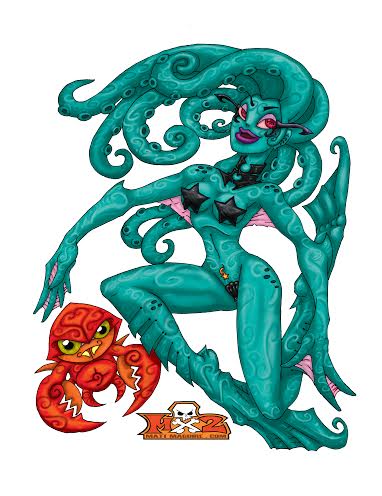 WW: Are you self-taught or did you go to school?

Slave Pit: I have been drawing, making monsters and robots, and creating comics since I was a kid. I did learn a lot in school and had really good art teachers, so some self taught and some taught. I did learn a lot from the guys here at the Slave Pit as well. Now I pass that down to some of our new interns.

WW: What lesson learned stands out the most after 20+ years with GWAR?

Slave Pit: That is a hard one … “Don’t talk about it, do it!” is one of the best ones because everyone one can have a idea but you have to go out and do the hard work to make it happen.

WW: If you could slay any member of GWAR, who would it be? And how would you kill him?

Slave Pit: You can’t really kill the Scumdogs. They are billions of years old and have no real way to be destroyed … so not sure how to field this one. Plus, why would ya? They are so kool!

WW: Top 5 places you have been with GWAR? Top 3 places you’d like to go?

Slave Pit: I would have to say that there are too many to name off here. But the best thing about being in a touring band for so long is that you get to see the world in different states of change. The place you thought was cool changes into a crap hole and some place where you had a bad day once will turn into your favorite place to visit. Looking at the open road is really uplifting. As far as places that I want to go…we are going over to Japan in February of this year it has been one of the places in the world that I have wanted to go to since I was a kid. Can’t wait!!!

Slave Pit: There are way too many to mention. We have played with a lot of fun bands and have done a lot of crazy shows so it’s to hard to pick just one.

WW: How have GWAR fans changed over the years?

Slave Pit: Our fans are awesome. First of all, to be able to get what GWAR is all about. A lot of people can’t get over the big rubber dicks or the blood to see the messages that we are trying to hit them over the head with a rubber sword with. There has been a generational thing as well cause original GWAR fans have kids now. Then they bring them to the show and we have a whole new fan base….Thanks guys! 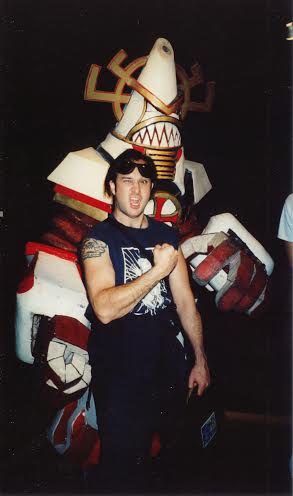 WW: Are you political in REAL life?

Slave Pit: Just with GWAR (haha) and talking around the water cooler. As far as the real life goes I just don’t have time for it. I have opinions like everyone else, but am too busy with my head in the clouds making giant robots and cyborgs.

WW: What lies in the future for Slave Pit?

Slave Pit: The 30th year anniversary is on its way! We are planning a lot of cool merchandise and events to kick off 3 decades of GWAR and the Slave Pit so buckle the fuck up and get ready for that!!

WW: Words of wisdom to your legions of fans?

Slave Pit: Stay gold Pony Boy…do or do not, there is no try. Thanks for all your support!  Bohabs rule!!! 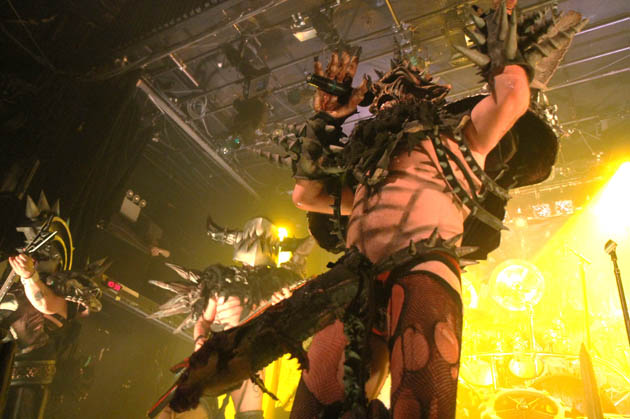