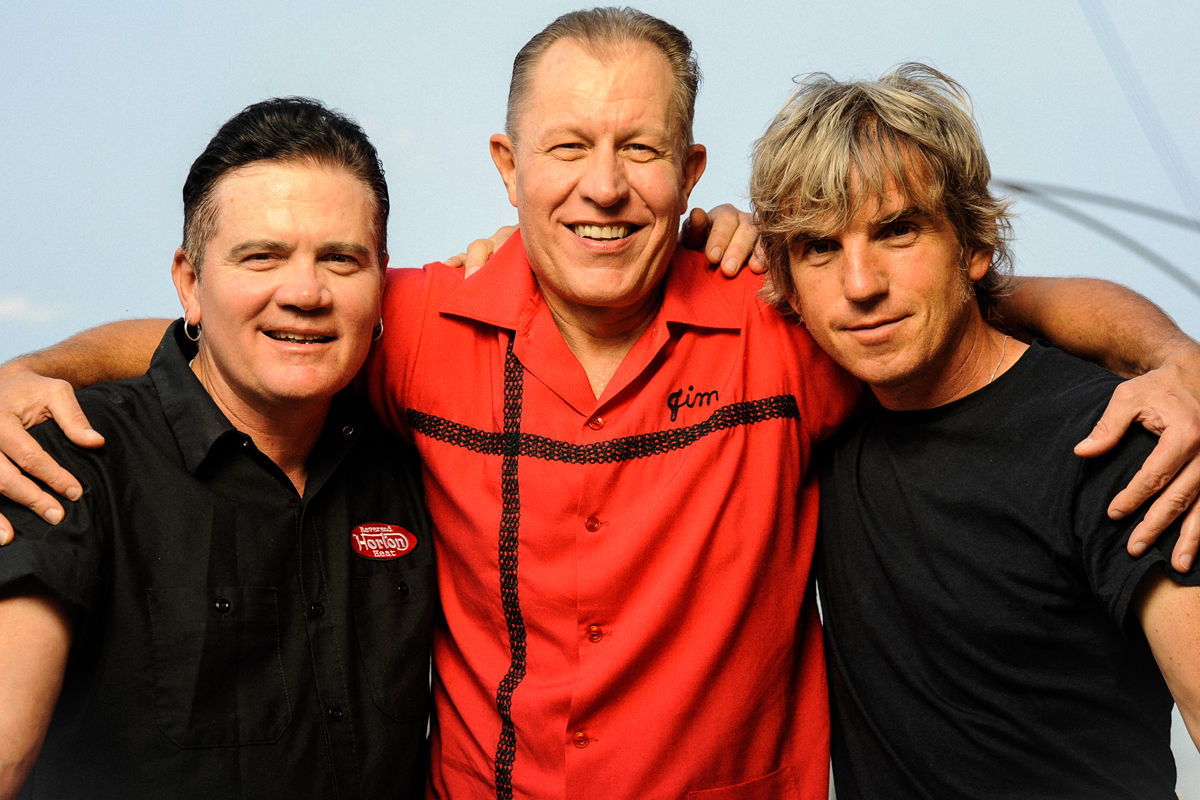 The Reverend Horton Heat is back with a new record on Victory Records and starting a tour that lands them in Austin on December 21st at Emo’s.  Their blistering sound and good humor songs are as good now as they have ever been. The fans must be out there salivating at the thought of it. Being a staple of the Rockabilly scene for over 20 years now is no small feat in a business where bands come and go on an almost daily basis.  If you think you haven’t heard them you might think again, they have been featured in the soundtracks of numerous films and video games.  Jim Heath, also known as the Reverend Himself, along with bandmates Jimbo Wallace and Scott Churilla are here to deliver the word and the sound. We figure a few questions on their thoughts about music would help the layman understand the force that has brought them through these 20 odd years. So open up your ears sinners and saints alike and take in what the Reverend is telling you.

RR: This is your first studio album in four years and with your new label, Victory Records. After you step away for a bit and then come back does it feel different or sort of like putting on your favorite pair of old jeans?

Rev: Every album is different. This one we recorded mostly on our own which was really fun. It enabled us to spend all the time we wanted without the constraints of costs or studio time.

RR: I watched the video for “Let Me Teach You How to Eat” and the sound is just as original as it has always been. You have been able to keep that signature sound since the beginning. What kind of process do you have when you start writing for a new record?

Rev: Well, since I started the band with my own original songs, I’m the main writer still. I mainly start with the lyrics and build off of that, but sometimes it’s a guitar riff or melody that gets the ball rolling. But, to get it all together it’s usually quite a long and unpredictable process.

RR: You guys are known for introducing “Psychobilly” to the world in 1985. What combination of elements helped to forge your distinctive and unique style?

Rev: I started Reverend Horton Heat in early 1986. What happened is that, in about 1989, I wrote a song called “Psychobilly Freakout”. Psychobilly started in Europe with bands like the Meteors, Demented Are Go and the Guana Batz in the late seventies. We do play shows and festivals with those types of bands, but I’ve never considered ourselves to be a psychobilly band. I really think that we are just more of a rockabilly band that is a little turned up and aggressive. We also do things that psychobilly bands don’t do – we can get jazzy, country or bluesy.

RR: How did you guys hook up in the first place?

Rev: I started Reverend Horton Heat as a solo act – just me and my guitar. After having some initial success, I started getting offered some pretty decent money so I started hiring some musicians to come and play with me. I eventually found some guys who were pretty much full time and we started playing all over the Texas, Louisiana, and Arkansas region. But, those guys eventually fell by the wayside. I’ve had nine different drummers through the years and two different bass players. I met Jimbo when I was on a gig in Houston and he played a little on my bass players’ bass after the show and it sounded super-cool. 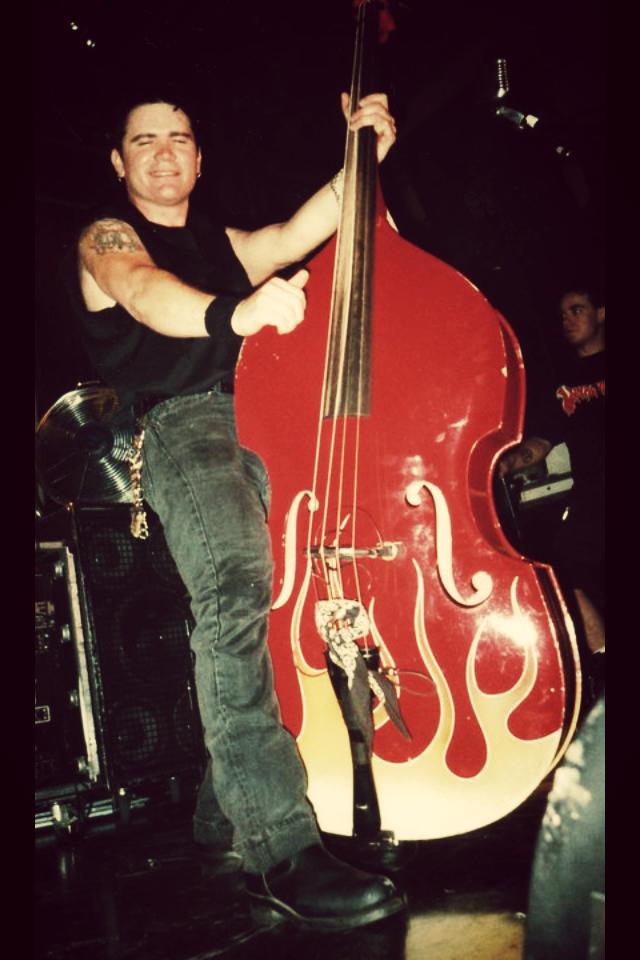 So, when that guy quit, I called up Jimbo. The next day he quit his job in Houston, moved to Dallas, joined the band and never looked back. His gung-ho nature has always been an important cornerstone to the success of Reverend Horton Heat. He’s been with me since 1989.

RR: Are you guys still based out of Dallas? How do you like to spend your free time when not busy with the Rev?

Rev: Yes, we are based out of the Dallas area. It’s great that RHH is now a very successful small business, but that means that, besides time with my family, I spend most of my time dealing with the business side of things which is a lot, unfortunately, just the minutia of being a tax-complier. Urrggghh. America needs tax reform. I’m for the Fair Tax.

RR: Who or what first inspired you to want to play music?

Rev: Johnny Cash’s music and my cousins really inspired me. The first song I tried to learn was “Folsom Prison Blues” when I was six years old. I thought that I was playing like Johnny Cash. It wasn’t until years later that I discovered that I was actually trying to play like Johnny’s guitar player, Luther Perkins. Seeing the Beatles on TV was pretty big too. Also, I discovered the blues when I was about 12 or 13 years old.

RR: Does what is currently popular in the culture who make up a majority of your fans ever influence you one way or the other? For instance, the popular resurgence of Horror influenced bands and burlesque?

Rev: I honestly think that retro, rockabilly, surf and kustom culture bands like us generated an interest in all sorts or mid-century things like swing, burlesque, hot-rods and vintage horror films. When Reverend Horton Heat started touring America, there was not a ton of interest in things like that – nobody had seen a band with an upright bass! Now, it’s everywhere. Of course, there were a few bands out there, but things were really different than they are now. It’s great that there’s been the resurgence in mid-century stuff – that’s where we’re coming from even though we’ve taken it to our own little place now. 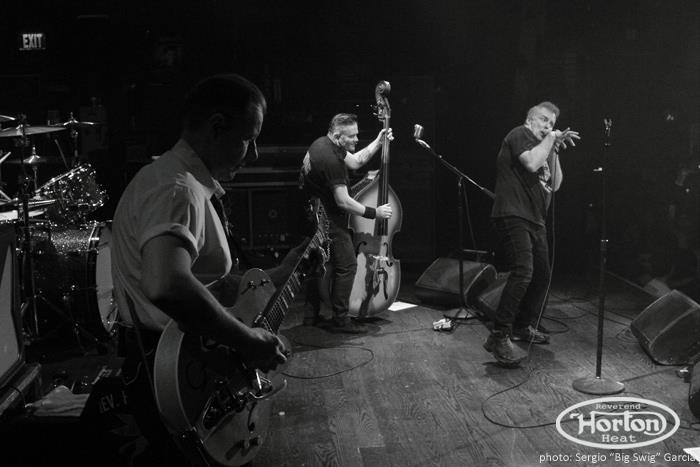 RR: There is a lot of interest in country these days, but do you consider what is sung on “The Voice” and at the Country Music Awards to be real country?

RR: Is popular music on a downward trajectory in general or is that just what everyone says as they get older?

Rev: I just think that music is always changing. I think that the digital age has had negative and positive effects on music. The positives being that young musicians can have access to cool rockabilly, surf and rock and roll from the mid twentieth century that was getting hard to find at the end of the vinyl era, and, they can promote themselves to a target audience world-wide through the internet without the need of a record label. The negative being that so many guys just sit and sample sounds over some generic beat and it’s called a “band”. DJ’s are NOT musicians.

RR: You guys are just getting started on a new tour, any particular Venue or City among your favorites?

Rev: The fact of the matter is that we tour regardless of any album release. We still play about 130 shows a year. But we really like going to all the cities in the US. There’s so much that they all have to offer. Of course, sometimes we’re stuck at venues that may be in a part of town that’s a little dull, but, by and large, we get to spend most of our time in the cool areas of cool towns. One thing that I like is that we get to play a lot of the same old theaters and ballrooms that hosted all the greats from Duke Ellington and Elvis to Hendrix and the Sex Pistols. Lots of great history in those places like Cain’s Ballroom in Tulsa.

RR: You are playing dates with Nekromantix and The Creepshow, are the fans for the horror associated bands any different?

RR: You also have several dates with Jello Biafra. What is Jello like these days and what does he do live? Is it Dead Kennedys stuff, spoken word, politically motivated or some whole new persona?

Rev: We’ve done several dates where Jello comes out in the middle of our set and we back him up. It’s a mix of DK songs, his new stuff and some cool covers. It’s tons of fun for us to kind of sit back and play while he’s the front guy.

RR: You guys have been together for almost 30 years. What do you think is a key element to a band’s longevity?

Rev: We love playing music and we figured out that the partying thing was detrimental to our live shows. We made a pact that we would not drink before the show – that’s where you get into trouble. Once the show starts, then it’s ok to drink if we want, but that one decision made our longevity possible. Of course, there were .001% of our fans who were disappointed that we wouldn’t go drinking with them before and after the show, but for the other 99.99% of the fans, it was way better. 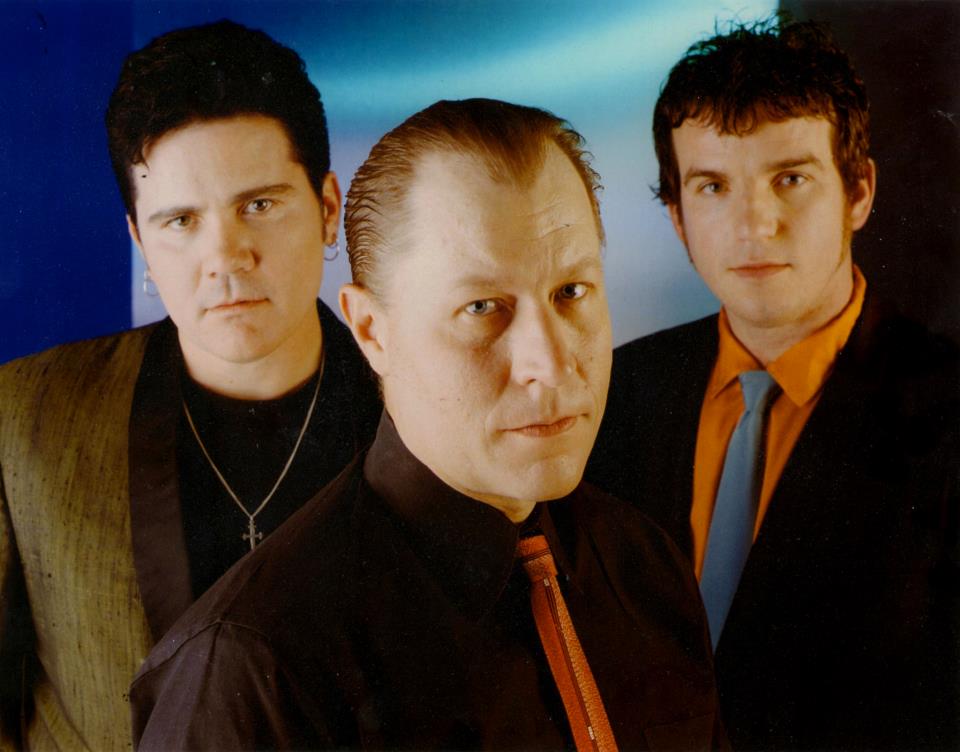 RR: Reverend Horton Heat has been in the music biz long enough to see it undergo lots of changes. How has it changed for the better? What do you miss from the old days?

RR: If Reverend Horton Heat had a mission statement, what would it be?

RR: Who are you listening to these days? Are there any new bands that you are particularly fond of? Any that might surprise people?

Rev: I wish that I had more time to look around for new bands. I’m a little too preoccupied with my own new band. J.D. McPherson is pretty awesome. There’s an Australian band called Pat Capocci that’s great too. I love the new Deke Dickerson album. Two Tons of Steel are great too. Larry and his Flask are one of the best live bands around right now and not one of the bands that I mention uses turntables or samples. 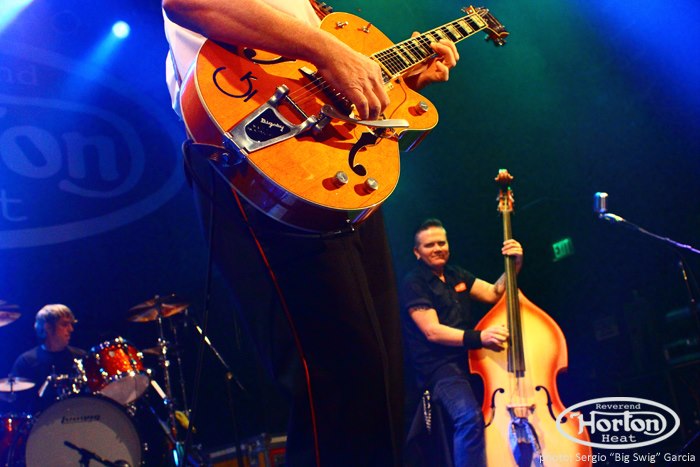 RR: What’s your definition of success in rock-n-roll?

Rev: Being able to draw rowdy crowds all over the world. Or, at least the parts of the world that like rock and roll feels pretty successful. But, success is somewhat subjective. 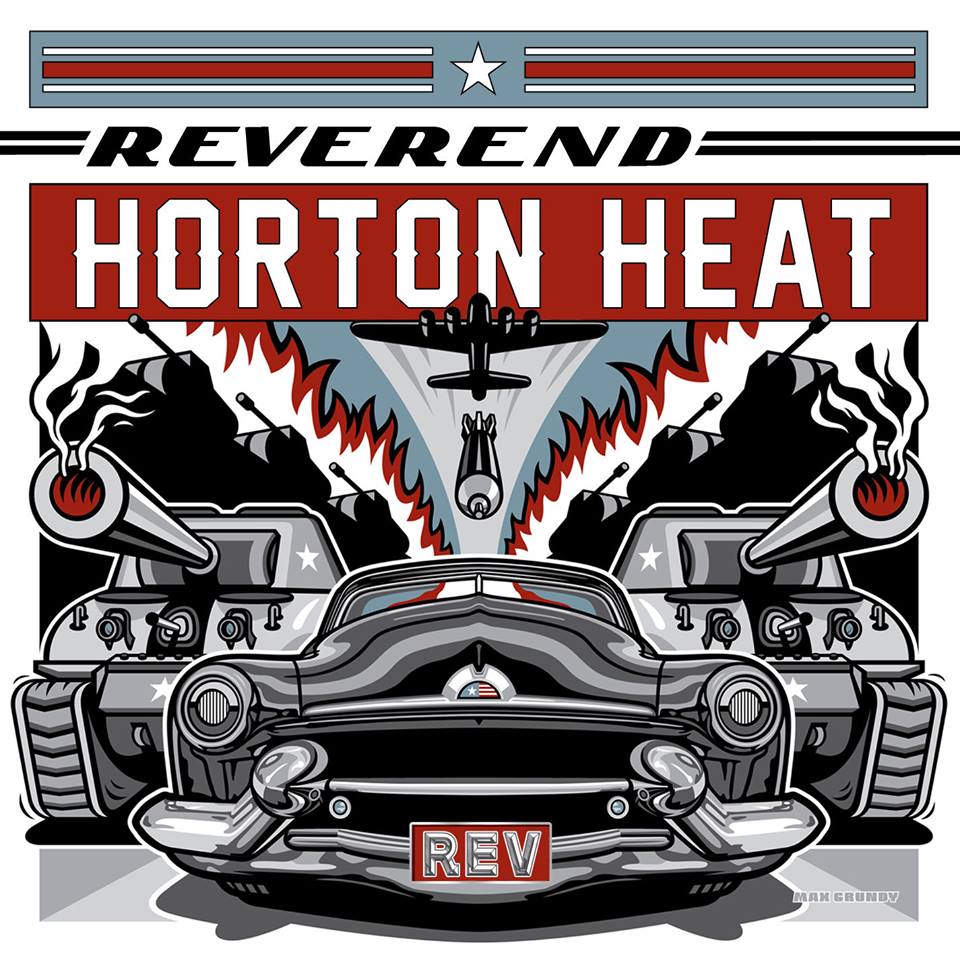 Rev: I’m thinking that it’ the 10th studio album, but, who’s counting? I’m loving all the songs, but there’s a couple that didn’t make this album that are pretty fun too. They’ll make the next album, I’m betting. The songs “Victory Lap” / “Smell of Gasoline” are pretty fun. We play them back to back.

Rev: We’re playing a lot of cool festivals this year. Punk Rock Bowling, Coachella, Hootenanny and others. I’m a partner with the great tattoo artist, Oliver Peck, in a festival called the Elm Street Music and Tattoo Festival that’s going to be in Dallas on June 12 through 15. I’m also working on my own festival that’s going to be a touring festival if I can get it together. Other than that, I’ve got a gig sitting in the Les Paul Trio in NYC on January 27. I’m sure other stuff is going to pop up too.

Rev: Well, I’d like to try to get into practicing my guitar more. It’s so much work doing an album, I kind of neglect learning new guitar riffs and concepts. I hope to get with that program asap.

RR: Well, I’m going to wrap this up by wishing you Happy Holidays, Merry Christmas and all that jazz. Do you have any final words of wisdom for your legions of fans?

Rev: I’d like to thank my fans for their continued support. It wouldn’t be possible without them. I feel like the luckiest guy in the world and I love what I do.