As I brought my first load of gear through the small door of Elysium (705 Red River, Austin 78701) on the afternoon of Wednesday August 22, a chill went up my spine even though the temperature gauge read 104 degrees Fahrenheit. The more gear I brought in, the more I felt like I was going back in time. I had felt the same in June when I played Elysium with my rock band Line of Fire during a showcase for the Final Five Agency of Dallas, the same fine folks who sponsored the gig on August 22. True, I had seen some fantastic shows at the classic Goth venue over the years, such as Sean Lennon and Yoko Ono during a Chimera Records showcase and Genesis P-Orridge of Throbbing Gristle and Psychic TV fame. Was it just memories pushed into the recesses of my mind which brought this feeling of living in another time with ghosts every time I walk through the door of Elysium or was this dusty atmospheric combo of old wood and tin and metal and posh furniture and pool tables haunted? 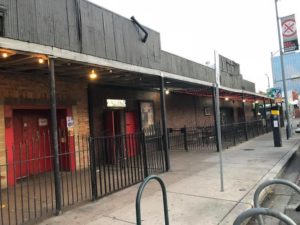 The shared front facade of Elysium and Beerland

Back in the early 2000’s, an acquaintance at the bar where I worked told me about walking around the attic/ second floor of Elysium, where this history (see sidebar “Painted on Outside of Elysium”) is painted on the side of the building. I think the person was helping with some electrical work to the building at the time. He said that there were small bedrooms which lined a hallway upstairs. The rooms still had room numbers on the doors. Some of the rooms had nightstands, old lamps and lingerie, tattered and forgotten. It used to be a brothel until the 1980’s, my friend said. He was on his third or fourth drink when he told me, so I did not really know to what degree his story was embellished. (As I researched this article, I found the guy was telling the truth – according to historical records, there was an 8-room brothel on the second floor of the building, which was originally a mule barn from directly after the Civil War through the 1940s.) 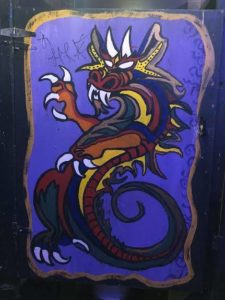 He continued insisting there was an eerie feeling in the abandoned rooms above Elysium. He said he was creeped out several times by the echo of wood falling on metal or metal on wood from corners of the second floor opposite where the workers and manager were inspecting. Maybe these falling objects were only mice and rats ravaging the forgotten space. However, the narrator insisted that bartenders had related instances of strange voices seemingly coming from the second floor late at night after bar close as they were counting the till and taking out trash. Through the years, I never forgot that story. Whenever I went to (or played) a show at Elysium or Beerland, I would ponder the haunting history of that old building.

I love the ambiance of the Red River Cultural District, the grittiness and visceral excitement of creating within the cesspool which has existed beside Waller Creek for centuries. When the history of the Red River Cultural District was first painted on the side of the building at the northeast corner of 7th and Red River (see sidebar for text), I would stand across the street trying to read the whole thing at once as my bandmates would complain about lack of proper unloading spots and traffic situations detrimental to huge bass cabinets. Over the next few months, we will be examining the historical significance of what was declared officially by the Austin City Council on October 17, 2013, as the Red River Cultural District. We will be discussing the musical significance of the venues on Red River Street with business owners, longtime employees, patrons and musicians, in an attempt to re-claim the area from its recent decline due to rampant spill-over homelessness from the less-than-successful ARCH center nearby. 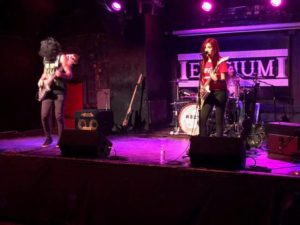 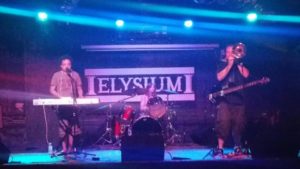 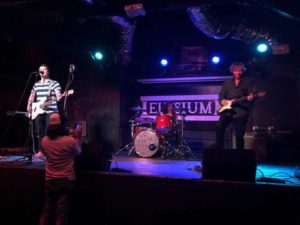 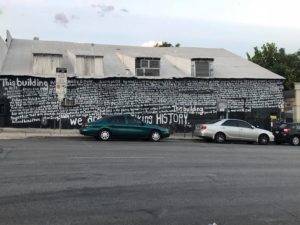 “Manifesto” side of Elysium

Painted on side of Elysium: “This building was originally a mule barn used by the US army during WW1, housed various second hand stores and then live music venues since the mid-1980s when the Cave Club introduced industrial music to Texas. Red River Street was the eastern edge of Austin when the street plan was laid out by Edwin Waller in 1839. From the 1940s ‘til the ‘80’s, the strip was dominated by used furniture stores and junk shops with names like J.B. Branton, Williams Do-Rite Swap Shop, Fairyland Antiques, Dutch Meyers Trading Post, Red River Rats, and Harris Hunting Grounds. During the era of segregation, black-owned businesses were next door to white-owned ones on Red River from 6th to 15th streets.

“This was as close to the East Side, both spiritually and physically, as you could get in downtown Austin. Simon Sidle, a son of freed slaves, helped establish Red River as antique town when he opened his first shop in 1917 at 807 Red River. His daughters, Theresa Mays and Ilesta Alexander also went into the family business on Red River but their shops were torn down in the early 1970s as part of the Urban Renewal Project (Brakenridge). Since many of the displaced businesses were black-owned, detractors called the leveling of several Red River blocks “Urban Removal!”

“Also torn down was where Sam Lung opened Austin’s first Chinese restaurant in 1946. Lung’s Chinese Kitchen gave birth to Austin’s ethnic/ exotic food scene. Before the Vulcan and the Armadillo opened, Red River became the spawning grounds of psychedelic rock in 1966, when the 13th Floor Elevators debuted their first single “You’re Gonna Miss Me” at the New Orleans Club. Janis Joplin sang just steps away at the 11th Door that same year. Those clubs were where Symphony Square is today. Red River began to be known as Austin’s live music district in the 1990’s with Emo’s and 801 Red River leading the way for Beerland, the Mohawk, Club Deville and others.

“But that all started with the One Knite at the corner of 8th and Red River. Opening in 1970, a notorious dive with a coffin-shaped front door, the club hosted the Vaughn brothers and other blues savants years before Clifford Antone opened his first club on 6th street. In 1971, Pink Floyd had just played a show at the Municipal Auditorium and wanted to unwind with a jam session at the One Knite. When they said they didn’t know any Freddie King, they were turned away from the stage and sulked in the other side of the room. The anything goes spirit of Red River was alive in the 1990’s when the BYOB Cavity Club installed a half-pipe for the skateboarders. Miss Laura of the Blue Flamingo turned her drag bar into a punk club that was just scary enough to keep the trendy “alternative nation” away. At 900 Red River, Chances was that rare lesbian bar that booked indy rock bands, a wild hybrid that brought different cultures together. That open clientele policy continues at Cheer Up Charlies in the same former car lot office location. This building, the current Elysium, was once the home of the Snooper’s Paradise Secondhand Store. When Doug Sahm saw that sign in the late 1960’s, he started writing “Groover’s Paradise,” an Austin anthem for the ages. History never gets old. Time is as time was NOW! WE ARE MAKING HISTORY!”