My Evening with Suckling, or – Five Aging Punks in a Knitting Circle 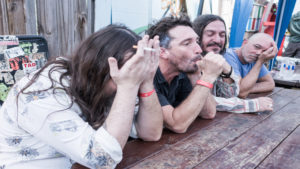 “Austin has two seperate music scenes,” Ezra Reynolds, organ grinder and the one in charge of “being antsy and really not much of a singer” in front of Suckling states with the authority of someone who knows. At the time, I almost argued that there were way more than that, but then he clarified.

“I mean, there’s the scene that everyone sees, the bands the Chronicle hypes and they show on the news. Then there’s the scene where all our friends are.” As a one-time member of the former scene via the incredibly cheesy but infinitely marketable (well, apparently not) Breedlove, yet another of the “almost made its” that Austin seems to spawn with remarkable regularity, he DOES know what he’s talking about.

And I’ll take friends from bands who haven’t “made it” over any musician who places fame and money over soul any day. Suckling alone boasts an all-star line-up with pedigrees known globally and they are just a tiny corner of the so-called Austin “underground” that has done more to change the face of modern music than any hit-maker that just re-hashes an old and tired formula. 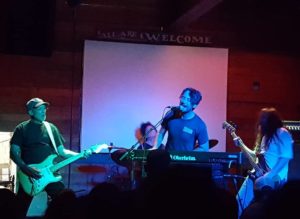 In addition to time spent in Breedlove, Reynolds was a Free Range Bastard, a PR rep for The Future of Air Travel and one of the seemingly endless roster of musicians that make up the revolving membership of Black-Eyed Vermillion. He is also one of the movers and shakers behind the founding of Jazzus Lizard, a quasi-jazz band that based structured improvisations around Jesus Lizard tunes. The slow dissolution of that band gave birth to Suckling, the product of a moment in time when all four members actually had time to do another band (the curse of Austin musicians in general – so many venues and bands, so little time).

The lead rhythm section of Win Wallace and John Paul Keenon have Gorch Fock and Sean Lennon in the “past employment” section of their CVs and Wallace is a well-known and recently award-winning fine artist. 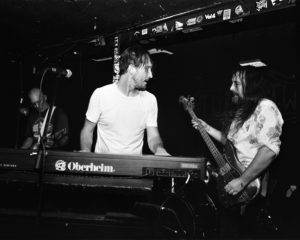 Brett Bradford on guitar can truly say that he helped put Austin on the post-punk map as a member of Scratch Acid, a band that would eventually provide the Jesus Lizard with bass and vocal acrobatics and animal impressions. He went on to play in Sangre de Toro, a much under-appreciated noise band from the 90s as well as Areola 51 with Jeff Pinkus and Max Brody.

The name Suckling itself suggests a birth of sorts, a new style of noise combining angular, sometimes jagged guitar riffs, industrial bass and drums and jazzy organ fills that somehow give the rumble of the band an airy and almost whimsical air. 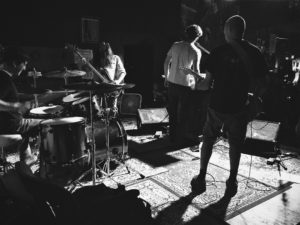 But not everyone is a fan of the name. Rey Washam, former drummer for both the Big Boys and Scratch Acid proclaimed it to be one of the worst band names he’d ever heard. Bradford’s response: “You were in a band called Rapeman.”

Yup. When the members of Scratch Acid sans Bradford moved to Chicago to work with Steve Albini, Washam and bass player (and future Jesus Lizard) David Sims had a band with the Big Black frontman named after a certain Japanese manga. Fully aware of how the name would come across to the general non-Japanese sex comic reading American public, the band proved that, at least in 1988 when their first EP, Budd, was released, that punk was indeed not dead. In addition to Albini, Sims and Washam’s in your face band name, they named their debut recording after Budd Dwyer, the Pennsylvania state treasurer who shot himself in the head during a live news conference. Keep it classy, fellas.

At this point, the “interview” degenerated into what it really was: five aging punks talking smack about other aging punks. 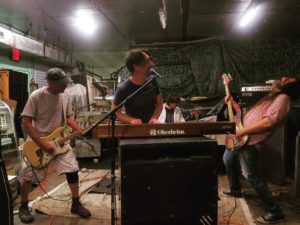 The Free Range Bastards were a staple at the Hole in the Wall during the time that it was owned by Debbie Rombach and a now-sober Hickoid. I was marginally employed there at the time and somehow became a cocaine concierge to a certain much-hyped Austin musician who fronts a band that rhymes with coon (no offense).

It was during this time that certain musician decided it would be a good idea to play a series of shows without his professional band and rely on a boom box. Chris Knox he was not and it did not go over well. Cocaine’s a hell of a drug

Then there’s Jello Biafra. My run-in was at an Alternative Tentacles showcase at Jackalope during a SXSW. Bradford’s was in LA when Scratch Acid were playing the Whisky. Good conversations that ended with the heterosexual interlocutors being completely put off and a little creeped out. Mr. Biafra, if I were in any way gay, you would be a score. But I’m not and the whole thing was a little skeevy.

Gossip fodder aside, Suckling is at the forefront of a new noise renaissance that seems to be occuring in Austin. We are the Asteroid just killed in Japan, Sabbath Crow has brand new album coming out and ST-37 just came off a successful national tour. Go noise rock! 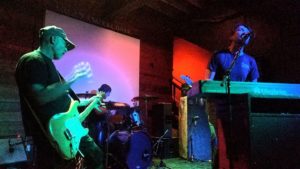 They will be bringing their signature sonic attack to ACL Live at the Moody Theatre this Saturday, September 22nd. Check out the re-union of sorts as three members of Scratch Acid stretch across two bands and make every effort to partially deafen everyone and off-set the cardiac rhythms of anyone too close to a woofer.