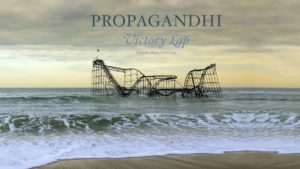 Propagandhi is a band that I caught on to later than most. Definitely one of the better bands to come out of Canada in my opinion. I got into this band between Supporting Caste and Failed States. From there I dove back into their earlier material. They have come a long way from being signed to Fat Records and coming from more of a punk back ground to present day where there is more of a metal influence on a lot of their songs . Propagandhi is a band that puts a lot of thought into most of their lyrics and song compositions. They almost always throw in some curve balls as well. You know what you are getting into listening to a Propagandhi album, but you never know exactly what you are gonna get. Victory Lap follows this logic while also keeping with the evolution the band has been following for the last few releases in many ways.

1. Victory Lap – The band starts off the album with the title track. The title track is a faster yet mid-paced affair. The song definitely has a gallop to it. There is more of a pop punk sound to the song with some metal tinges thrown in here and there. The lyrical content seems to be their view of how things are going in the world and US. There is a cool break down towards the end where lead singer Chris Hannah asks “God are you there? Can you confirm I am on the right goddamn planet?” which perfectly sums up the lyrical content of the song as they speed it back up and finish it out.

2. Comply/Resist – The 2nd song on the album starts out a little slower for the first minute or so. It has a little bit of a build up with Chris’s vocals and lyrics front and center. After about a minute of buildup and slower pop punk sounding vocals the flood gates open with thrashier guitars filling in the blanks as Chris’s melodic vocals sway back and forth. The song has more of a metal edge to it. The lyrics seem to address racial inequality and the gap between the poor and rich. The lyrics “Resist Comply You Die” seems to convey the idea that the odds are so stacked against some that it doesn’t matter what you do either way. Definitely one of the faster songs on the album.

3. Cop Just Out Of Frame – This song sounds more like some of their earlier material from the Fat Records days. The guitars and rhythm section are very upbeat most of the song. About half way through the song they throw in a short break down with metal sounding guitars before going into some solos over more of a SoCal Skate punk sound with more metal sounding riffs thrown in for good measure as the song closes.

4. When All Your Fears Collide – This album starts out slower with big plodding riffs followed by a little melody mixed in with thrashy sound guitars that eventually speed up and propel forward with the rest of the band in tow. This song is definitely one of the more metal sounding songs on the album. Chris’s vocals never reach the harsh levels you see a lot of metal bands employ, but his vocals sound great over the instrumentation. The slight variations in his vocal delivery really help make this song great. This is definitely one of my favorite songs on this album. The metal heavy cross over sound really appeals to me. This song slows down a little bit as it enters the home stretch, but it keeps the intensity going.

5. Letters to A Young Anus – This is another song that reminds me of some of their earlier work with some metal riffs thrown in here and there for good measure. The song is fast and upbeat with Chris doing double time on the vocals. The lyrics are a letter to a younger child with lyrics that include “Be careful how much you reveal” and “I got one piece of advice for you, kid. Keep your mouth shut, put a fucking lid upon your dissenting views”. I feel the lyrics are meant to convey how most of the ruling class views the younger generation these days. The song is another ripper from front to back.

6. Lower Order/A Good Laugh – This song has more of a metal intro and riffs starting the song off or at least that is what you think it will be until it changes into a softer sounding pop punk song with a heavy message. The song talks about Chris’s first hunting experience as well as the factory farm industry. The lyrics convey how people treat animals as a lower order with no sense of their feelings and sometimes even laugh at their despair. For such a heavy message it is a really happy sounding song. I guess that is why the instruments are toned down for this one so the lyrics can sink in. Very pop punk sounding song.

7. Failed Imagineer- Failed Imagineer is a song about what happens when people come back from war. It talks about a veteran that has come back from war with PTSD and violent urges as well as a veteran who is remorseful and sad about the killings until his death bed. The song is short and fast paced. This is another song that I could see on some of their earlier material. It is a fast punk song that is over before it begins. Again very upbeat and happy sounding with a heavy message.

8. Call Before You Dig – This is another short and sweet song that starts off with metal sounding riffs before Chris’s vocals come in. Once his vocals hit it becomes more of a mid-paced pop punk song. They pile on the melody as the song progresses and ride it out on that note. The song also showcases Chris’s vocals all over it before it comes to an abrupt end.

9. Nigredo – Nigredo opens up with more metal guitars and rhythm section that lays way to a small instrumental intro and build up. There is a really nice melodic guitar part before it launches into a mid-paced song. The song definitely has more of a metal feel to it. This song never really speeds up like some of the previous songs, but it switches between quiet melodic parts to crunchier mid paced parts. This song again show cases Chris’s vocal range going from softer stuff to heavier sounding parts as well as the band’s diversity sonically. Great song.

10. In Flagrante Delicto – Song number 10 starts out with very beefy and metallic guitars before heading straight into an 80’s thrash sound and eventually injects a little melody and a killer baseline. This song has the beat of a punk song with metal guitars. “The fine line between arousal and disgust” sums up the lyrical content of this song really well. The lyrics show how quick we are to get joy out of someone else’s misfortune when in reality we are all more similar than we like to admit. This song is a pretty straight forward rocker from front to back.

11. Tartuffe – I really dig the riff and instrumental parts on the beginning of this song. The riff reminds me of a sped up rock and roll song. The guitar has a special swagger to it that really sets this song apart from the rest. The lyrics are about people playing a character instead of just being themselves and it fits in great with the instrumentation. I also really enjoy the instruments during the slowed down parts of the song. Chris’s voice is all over the place in this song with great results. There is a small build up towards the end that slowly fades away as the song ends.

12. Adventures in Zoochosis – They start the last song on this album with quiet guitars and the sounds of kids playing outside. Soon they add in some of Trump’s worst sound bites over the calm sounding guitar. Eventually as the song passes the minute mark some razor sharp riffs usher in a harder sound. It is still very melodic, but eventually it goes to a mid-paced romp. This song has a lot of groove to it and melds the pop punk sound with metal riffs expertly. This song definitely has more of a punk feel than the last few songs. The lyrics talk about a situation where people are the captives in a zoo and how most people don’t put up a fight because they are comfortable and taken care of. “Perhaps a bigger cage? Longer Chains? Some compelling, novel reasons to remain?” is a good example of the lyrical ideas this song convey. I dig the melody and guitars this song includes. Chris’s voice and lyrics are front and center the whole song and the band molds perfectly around his voice and lyrics.

I really enjoyed this album. As someone who is a fan of their whole discography I feel like this album has something for everyone. I really enjoy the political leanings of a lot of their songs. The lyrics and instrumentation go very well together. I also enjoy that this is a band that practice what they preach. They are very involved in the social issues that they high light. I feel in the current atmosphere we live in bands like this are needed and always will be. I also really enjoy how this band melds the cross over punk/metal style so well. I feel their sound has been heading this way over their last few releases and this is probably their most complete release to date. If you enjoyed any of their previous work or enjoy politically charged metal and punk give this record a spin.

This entry was posted in LP/EP/Single, Reviews and tagged Fat Records. Bookmark the permalink.