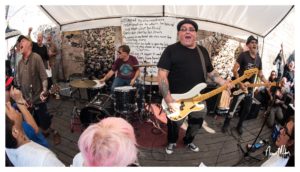 The remnants of Poison 13 celebrating the life of their bandmate. – Photo by Jerry Milton

I missed Poison 13 while they were an active band. They pre-dated my move to town by a few years and at the time (mid-80s), the band from Austin I was rabid about was Scratch Acid. Upon arrival to attend UT, I attempted to “catch up” with what was what in Austin – mostly through Jason Austin, who seemed to somehow know fucking everybody. Luckily, that education included Dicks, Big Boys and all their spin-offs. By the time the garage revival swept away a good portion of the 90s in the wake of the grunge explosion, Poison 13 was established as one of the modern pre-cursors to the movement. When Mike Carroll’s new band at the time, the Lord High Fixers, hit the scene, he was rightly respected as the founding father he was.

I was fortunate enough to meet Mike Carroll, first at GarageShock in Las Vegas, and later at shows and events around town. Julie Mercer-Carroll, the love of Mike’s life, is a long-time friend. But Mike I only knew each other enough to say “hi.” We were never close and that’s something I will always regret.

Earlier this year, Mike Carroll passed away due to a virulent strain of bacterial meningitis. He was hardly old enough to warrant passing at all, and something that is so preventable that it just simply never should have happened makes it that much more tragic.

But March 18th, the last day of SXSW and annual Chili Dog Fest benefiting the Austin Food Bank, was not about recriminations, anger or grief. Well, maybe a little, but that was not the intent. The intent was to celebrate the life of a man who lived for rock and roll and the music it sprang from like a mutant swamp beast, the blues. Whether a friend, family member, band mate or just a fan, everyone was welcome. The smiles were many and the hugs numerous.

Mike Carroll was known as a charismatic, high- 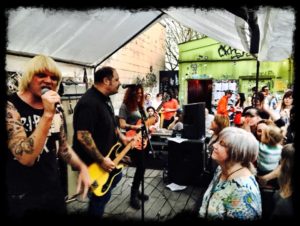 energy  front man and the bands tapped to play this tribute show reflected that in their line-up. I’m doing this completely bassackward for a second, but bear with me and I think you’ll see why. East Side Suicides played just as the sun was going down. Everyone was pretty plumb wore out by then, but the band tore through a set of amped up punk ‘n’ roll, backing up Frankie Nowhere’s channeling of Stiv, Iggy, Mick and any number of other engaging front men I’ve never heard of, throwing his own boyish, lopsided charm into the mix.

The Crack Pipes took the stage as the crowd was near apex volume. Ray, Mike, Billysteve and company took the audience to a backwoods tent revival. Ray played used car salesman-cum pastor to berate, entertain and convert the crowd while the band honked their particular brand of deep south inbred blues. 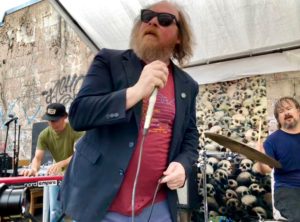 [No snakes were charmed or injured during the Crack Pipes set. Trauma, however, is hard to measure in reptiles.] 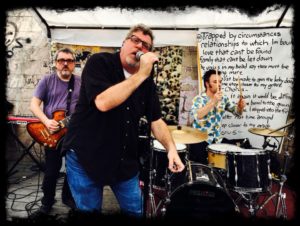 Following the Crack Pipes’ Sunday service, a revolving cast of musicians took the stage to play The Songs That Mike Taught Us. Bigfoot Chester’s Walter Daniels and Son of Hercules Dan Hoekstra were just a few of the all-stars present to lend their talent to this celebration of Mike Carroll. Bill Jefferies lent his trumpet to the mix, joined by Mark Tonucci on tenor sax.

Toby Marsh, formerly of the Motards and currently doing Yardwork with Sean McGowen, laid down some fat, blues-drenched bass lines. Chad Nichols (I have no idea what bands other than Swagkee Lowtel Chad has done. Rather, I’m just spacing right now. Sorry, buddy) lent some guitar work to the show, thanking Mike in a way he would appreciate.

Another new face to me was Omari Jamal, a young guitar player with licks that lead me to believe that this is a musician to follow. 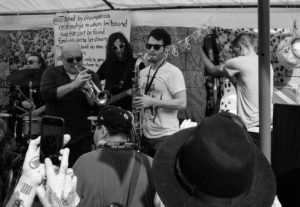 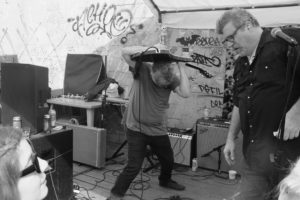 Dan Hoekstra rocking it while Walter catches his breath. – photo by Mark Lochridge 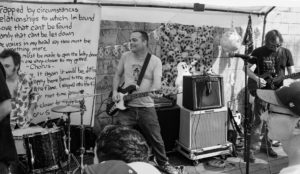 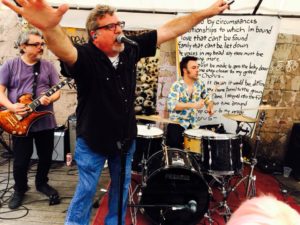 Walter, Dan and a drummer who’s name I do not know. Wow, working that Journalism degree! – photo by Wes Jak Bingham 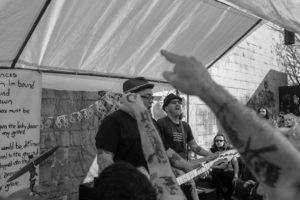 Bill Anderson, founding member of Poison 13 along with Mike and fresh-out-of-the-Big-Boys Tim Kerr and Chris Gates, soon made his way to the stage, and proceeded to do what he does best: play the blues through a filter of 80s disaffected, angry punk rock.

Then something historic happened. A long-ago falling out and subsequent mutual cold shoulder that Kerr and Gates had sustained for well over a decade made any hope of a Big Boys reunion an impossible daydream. Never again would they be on the same stage at the same time.  And then something else happened that took any possibility of a reunion away. I don’t know if the passing of Big Boy frontman Randy “Biscuit” Turner was the catalyst was that brought these two former band mates back together. Perhaps it was more recent. I don’t know. It doesn’t matter. 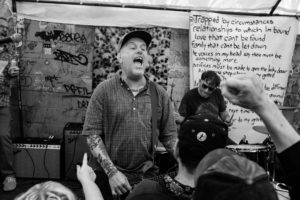 Tim Kerr and Butcher Bear. Lyrics to “One Step Closer” in background – photo by Mark Lochridge

What I do know is the second those two Austin legends first stood on that riser together in who know’s who long, a little smattering of rain hit the crowd. It wasn’t a lot and it really wasn’t even that refreshing as hot and packed as the outdoor area was. But, just for a second, it was like even the universe was weeping for joy.

With three of Poison 13’s founders on stage, it was time to rip into “the hit.” Lyric sheets with the words for “One Step Closer” were handed out and a large, hand-written flyer with the lyrics was posted prominently next to the drum kit.

This wasn’t the first time I’ve been part of a crowd that, for the length of a punk rock song, became one with the band and each other. Those moments are fucking magical. This was more than that. This wasn’t just a powerful sing-a-long. It was a hallelujah! and middle finger to the universe that took Mike away from us too quickly. It was moving and it was bonding and it was elevating. And it rocked. 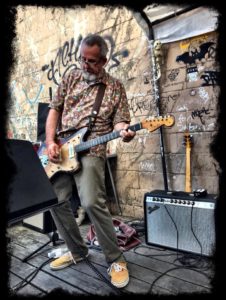 A freshly re-united (or just back from one long ass hiatus, I never did get clear on that) Sugar Shack closed out the show. They did some of their grunge stuff. They did some of their garage stuff. I’m pretty sure they did “Fearless Frat Killer” about our friend Dave de Luna. [Edit: It turns out they didn’t. But I still think of Dave frequently, so it stays.] But they ended the set with a dedication. I honestly can’t remember if it was to Mike or Julie, but after Mark Lochridge made the shout-out, the band went into a surprisingly sensitive (yet true to Sugar Shack’s sound) version of the Kinks’ “I’m Not Like Everybody Else.” 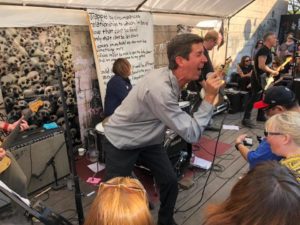 This time the tears didn’t come from the sky. But I hope they were cathartic and contained as much joy in them as they did grief. A great many people really loved Mike, Julie.

And we love you, too. 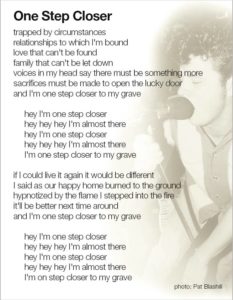