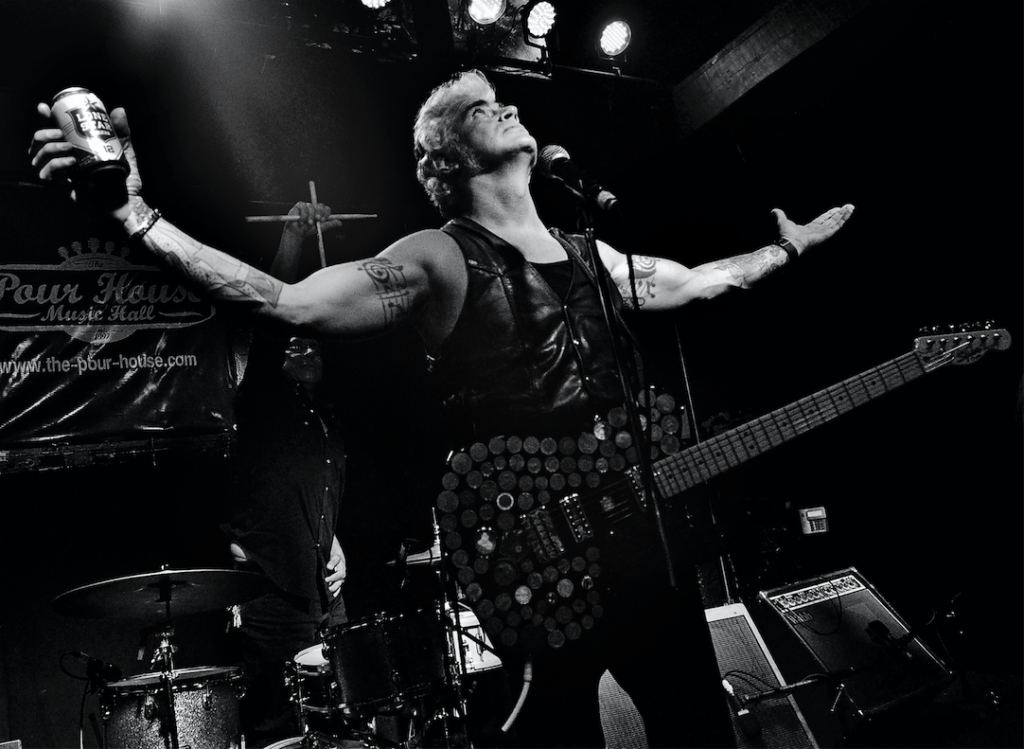 Rumors flew around Austin like a wildfire in high winds the last few weeks about Dale Watson leaving ATX for Memphis. And Watson is adamant to set the record straight after a recent interview gone askew. When I read his quote on social media to clarify the truth: I was relieved to read that Dale Watson will still be in Austin, Texas and Memphis, traveling the country, and the world, touring and playing music with His Lone Stars. So, rest easy, Texas, we haven’t lost one of most beloved musicians.

Dale Watson is a very well-known name in Texas, Tennessee and various parts of the world. Born in Alabama and raised in Pasadena, Texas — Watson moved to Austin in the early 1990’s and has made it his home ever since. Personally I’ve known of his name and heard about his music long before I ever saw him perform seeing as I’ve lived in ATX off-and-on since the 90’s. My Latina mother (and Texan) once told me that she had a crush on him back in the day and enjoys dancing to his country music. Even the legendary Willie Nelson spoke highly of Dale Watson and stated “I’m one of Dale’s biggest fans”. 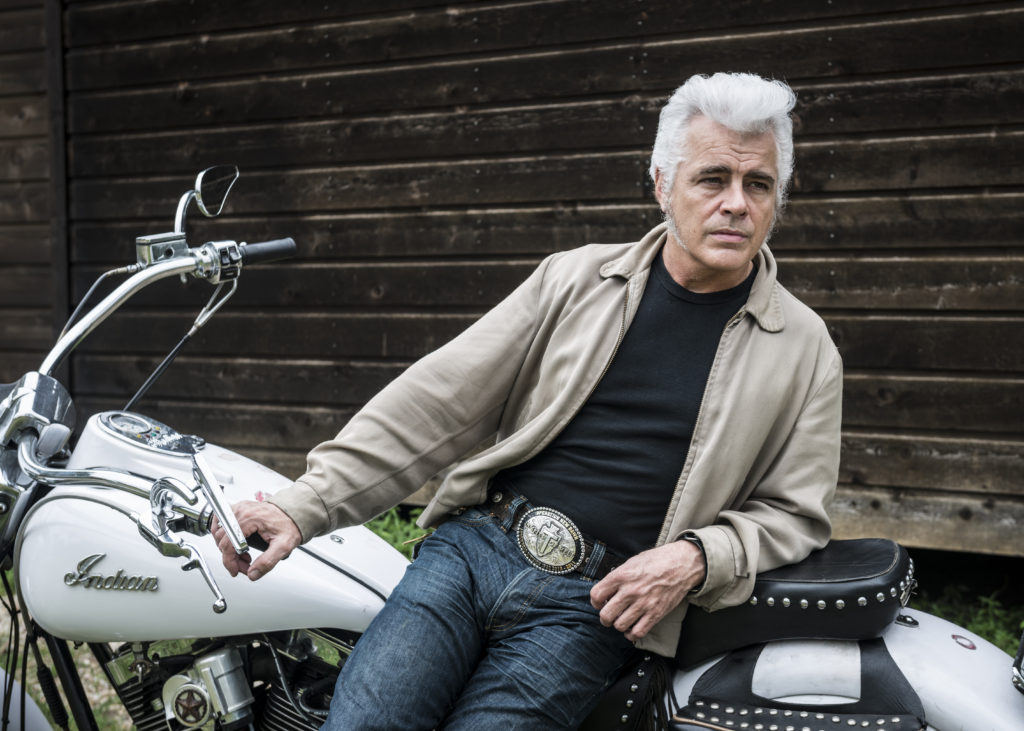 Watson has performed all over the world and is currently touring in Europe. However, in the near future he will be spending a little more time in Memphis and a little less time in Texas. Two homes, two cities he loves and still focused on sharing his music with his treasured fans around the world.

“O.K. friends , let me set the record straight, if you don’t mind. I love Austin. Austin is my home. I love Texas and will ALWAYS live in Texas. That said, I bought a house in Memphis as an investment and in the process fell in love with the town. It reminds me of Austin of the 80’s, the good and the bad. I play over 300 shows a year, meaning Austin and on the road world wide. To afford to live in Austin, I literally have to tour. As one guy posted I’m old and should retire, but I love what I do and quite honestly can’t afford retirement either. What musician can? These things are facts I’m volunteering now but I recently granted an interview locally. They had seen an article about my moving Ameripolitan Awards to Memphis and buying a house there. The interview was heavily edited. This happens often but the things left out were important to me. Things like, my love of Austin. My roots are in Texas and the fact that, at some point I will have to sell my house in Austin and move to the outskirts, but I will always have a house in Texas. I will hang on to being an Austinite as long as I can. Monday’s at the Continental Club, a Friday or Saturday at the Broken Spoke, and Chicken $#!+ Bingo at C’Boys on Sunday’s. As for the media, they suck. If any media repeats this post, then print the whole thing, because you suck at editing and paraphrasing. So, after all is said and done, I hope I see ya at my regular gigs in Austin friends. I hope you come to my AirBnb and recording studio in Memphis. And I hope you all vote when it comes to your mayor and city council. Peace.”    – Dale Watson 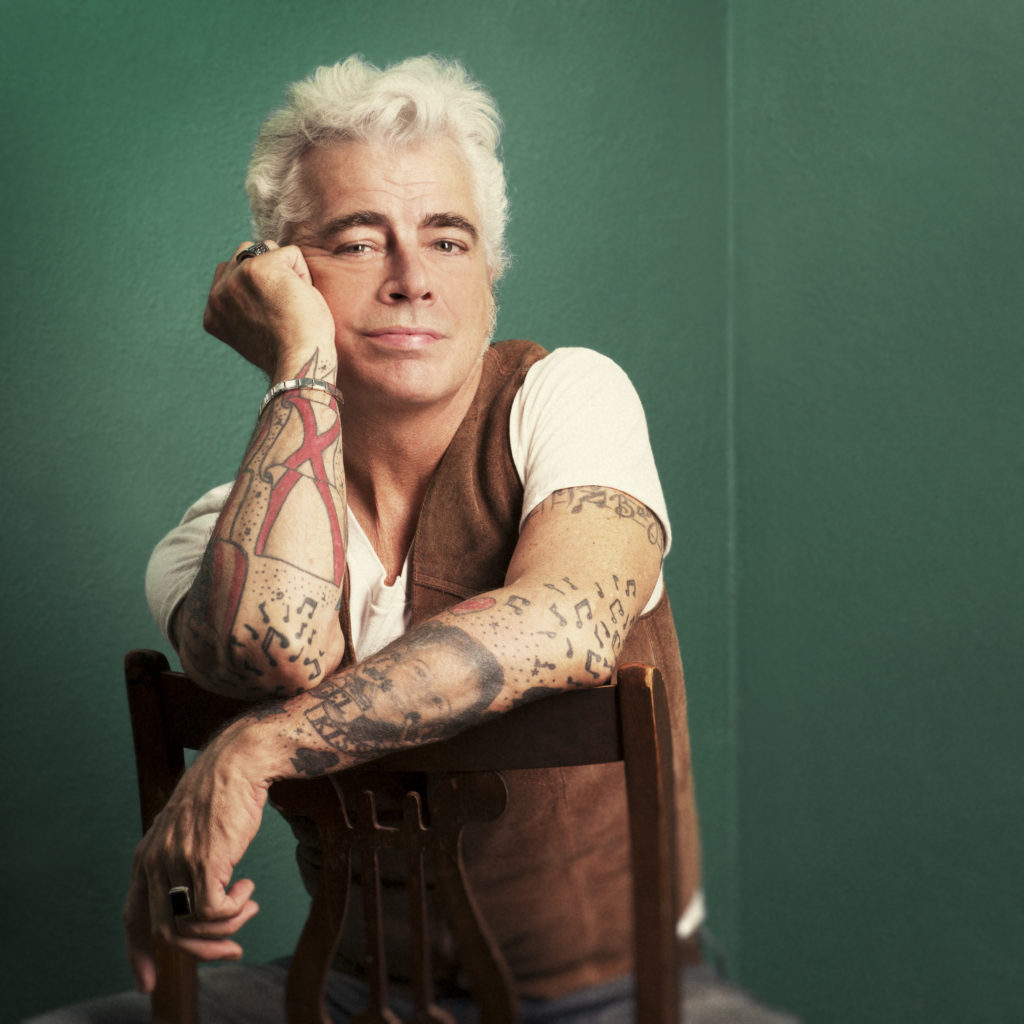 Secretly when I read the media coverage Watson is referring to, it seemed to me that pieces were missing to the interview. To play thousands of shows in Texas, you must really love the city of Austin and The Lone Star State, therefore it struck me as odd to read a short story that Dale Watson was just going to up and leave TX without going into more details. True, the city is growing overcrowded and is becoming more expensive as the love for the almighty dollar bulldozes the love for local artists. But, thankfully the rumors weren’t true and we can look forward to many more Dale Watson shows. Also, I’ve visited Memphis a few times and I can definitely see the appeal. Memphis gives Texas a run for its money in regards to BBQ, live music and the beauty of the hill country.

Over the past 20 years, Austin has become attached to Dale Watson and His Lone Stars. I am certain many Texans all over the state will also be relieved to hear Watson is here for the long haul, even if we must share him with the city of Memphis, too. Stay tuned to his website and social media to find local shows in your area to support local artists and keep the art scene alive and well in ATX! 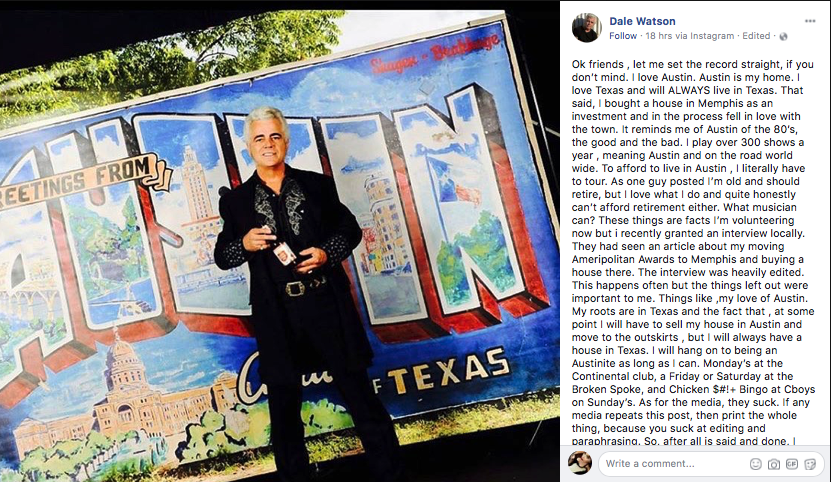 “Dale Watson, keeper of the true country music flame, this Austin-based honky-tonker carries on in the tradition of Johnny Cash, Waylon Jennings and Willie Nelson with his “Ameripolitan” brand of American roots music. Dubbed “the silver pompadoured, baritone beltin’, Lone Star beer drinkin’, honky-tonk hellraiser” by The Austin Chronicle, Watson sat in with Jimmy Kimmel’s house band as a guest on Jimmy Kimmel Live (ABC) from SXSW 2015. He also emceed the first ever SXSW “Ameripolitan” showcase featuring the best of Honky-tonk, Outlaw Country, Rockabilly and Texas Swing music. Since the release of El Rancho Azul in 2013, Watson’s profile has risen considerably via appearances on The Late Show with David Letterman (CBS), Austin City Limits and The Sun Sessions(PBS) and as a guest on NPR’s Wait Wait… Don’t Tell Me. A veteran touring artist and consummate entertainer, he is on the road more than 300 days a year. He also put his money where his heart is and took over ownership of two struggling Texas honky-tonks, the Little Longhorn Saloon in Austin (home of Chicken $#!+ Bingo) and The Big T Roadhouse in St. Hedwigs (outside San Antonio).  If not on the road, he and His Lone Stars perform at one of them each Sunday. Dale has flown the flag for classic honky-tonk for over two decades. He’s christened his brand of American roots “Ameripolitan” to differentiate it from current crop of Nashville-based pop country. The Alabama-born, Texas-raised Watson may be the hardest working entertainer today and is rapidly approaching legendary status.  He is a country music maverick, a true outlaw who stands alongside Waylon Jennings, Willie Nelson, and George Strait as one of the finest country singers and songwriters from the Lone Star State.” www.dalewatson.com 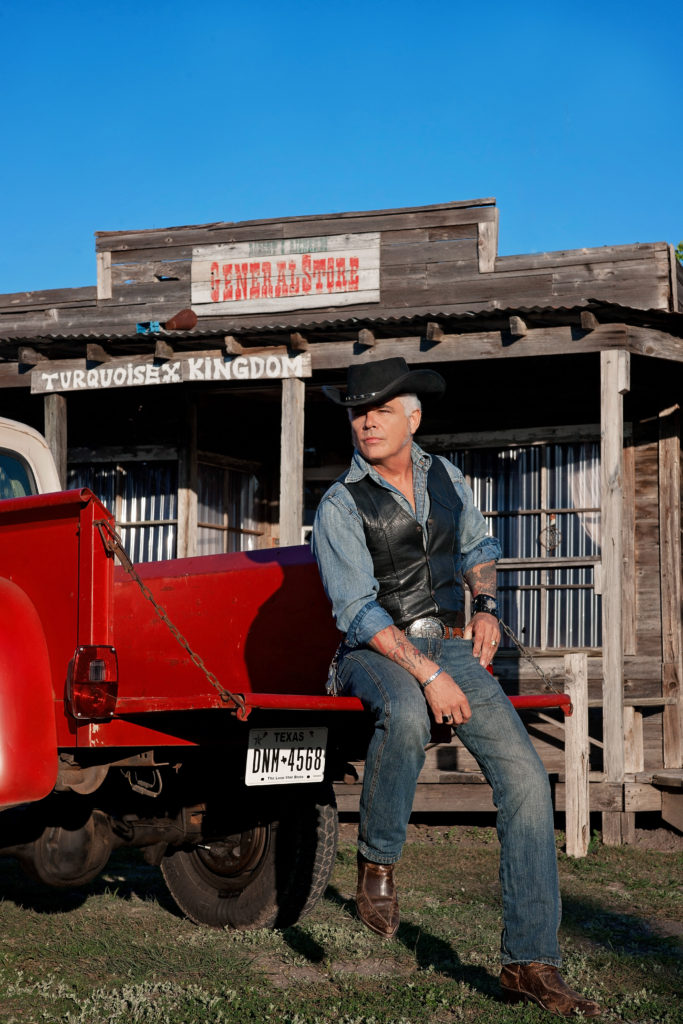