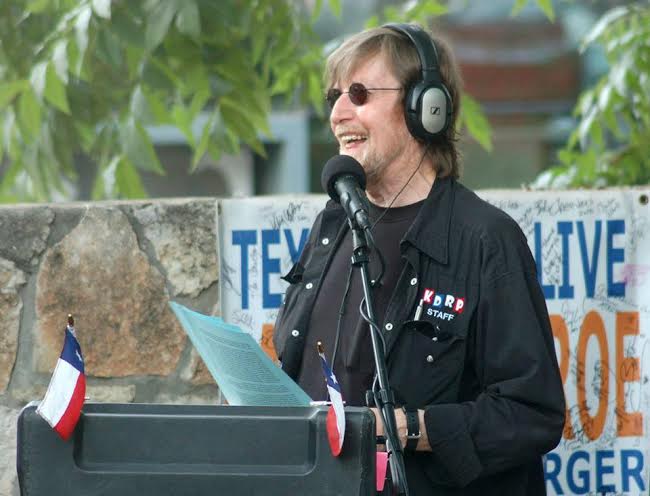 On Friday, January 17th those who were tuned in to low-power FM station KDRP in Dripping Springs, Texas were greeted with the sad news of the passing of radio legend and icon of Austin music Larry Monroe. Dripping Springs is a small community just southwest of Austin and it is where Larry had spent the last few years of an amazing career in radio. How Larry ended up where he was, in his own words, “having the time of his life” is something we have long written about here. In fact, it was the very genesis of this site as far as the Austin aspect of public radio went. I’ll be writing more of that later (Part 2 of the Larry Monroe story), but today we just want to say some things about Larry, both as an on-air personality and as a person. And he was just amazing at both of those things.

Larry was originally from Hartford City, Indiana and he got his first radio license at age 13 to broadcast on a 10 watt transmitter for his local high school. After high school he attended Ball State University where he was classmates with David Letterman. They shared several classes in Radio and TV studies. Larry graduated in 1967 and moved on to stations in Ann Arbor and Detroit. While in Ann Arbor he played a part in the “Paul is dead” rumor after the release of the Abbey Road album. After many years up north he followed the advice of George Frayne, aka Commander Cody, and in 1977 moved to Austin with the goal of putting Austin music on the radio. And what a job he did!

After kicking around a bit in various ventures he started with KUT-FM in March of 1981. He stayed there until retirement in 2009. In 1981 KUT was a small radio station on the campus of the University of Texas, its license was held by UT but it was not a student run station. While at KUT, Larry developed what were to be his two signature shows, Blue Monday and The Phil Music Program. And both came about by happenstance, as so many wonderful things do. Blue Monday originated after Larry just happened to play an extended set of classic blues on an otherwise dead Monday evening. But following that listeners started calling in wanting to know more about the “Blue Monday” program that they had heard previously. With the eventual approval of his station manager Blue Monday became a weekly staple, and in 2002 it received the Keeping the Blues Alive for Public Radio award from the Blues Foundation. It continued on the air at KUT until Larry’s retirement from UT systems in 2010 when he did a final show that was co-hosted by blues legend James Cotton.

The Phil Music Program had an even quirkier genesis, and one peculiar to Austin. In the 80’s KUT broadcast the Austin City Council meetings every Thursday night and Larry was the person on duty on Thursdays in case the council either adjourned early or went into closed recess. When those things happened Larry would write “fill music” onto the station logs to document what was being done and that was when Larry’s always missing alter ego Phil Music was born. The Austin City Council meetings were notoriously rambunctious and Phil Music might be on for a few minutes or a few hours depending on how things went. For those of us tuning in for music hearing Larry’s voice instead of the mayor’s was a sign we were going to have fun on the airwaves, at least for a while. This gave Larry a chance to program as the ‘free form” master that he was, mixing classic folk and jazz with current Austin artists and with a good dose of surreal Firesign Theatre humor mixed in as well. It was radio madness and Austin music fans took to it immediately. Eventually even the City council joined in the fun with any motion to adjourn being announced as the “Phil Music Motion” and it was voted on thusly. When KUT stopped carrying the Council meetings Larry was awarded the 8-11 time slot on Thursdays and a permanent format was set. The show would always have a theme and the show would always start with the “Phil Music excuse” stating why Phil Music hadn’t shown up, leaving Larry to stand in. And the excuse was always a key to the theme. And those themes could be amazing, shows based on cars, elections, shopping, the possibilities were endless and all from the ever imaginative mind of the true host, Larry Monroe. His last theme was going to be about “bridges” after the Bridge-gate controversy currently sweeping New Jersey.

But it was The Phil Music Program that eventually brought about his dis-enchantment with management at KUT. In 2009 he was called into the station manager’s office a couple of hours before show time and was told that the show had been cancelled and a newer, younger DJ was being given that time slot. Being the professional that he was, Larry accepted the loss of his show without public complaint, but his listeners had other ideas. There were emails and calls of protest, and when station management refused to even discuss the situation, a protest group was formed with thousands of members and battle lines were drawn. But through it all Larry maintained his public silence and refused to be brought into the conflict, at least as far as any public comments went. But despite the public outcry station management stood their ground until the Thursday before the final Blue Monday when they gave him back the slot for one night to play the “lost” Phil Music episode. And with his retirement both shows seemed to be fading into Austin lore.

But like all wise cats Larry had a few lives left, and in 2011 he was back on the air at KDRP. The savvy folks in Dripping Springs offered him his old time slots and programs back, no strings attached and with full artistic control. Larry jumped at the chance and a new phase of his long career began. He moved the times to 7-10, he once told me it was to get the jump on his former employer’s shows. Blue Monday was back with its Fats Domino theme song and Phil Music was back with its trademark excuses and themes. And shortly after that KDRP also resurrected another of Larry’s favorites, Texas Music Live, now broadcast every Wednesday from Guero’s Taco Bar on South Congress in Austin, smack in the middle of the “SoCo” entertainment district and featuring a list of notables that is far too long to document here. In his last week here with us he just barely made it to Guero’s by show time and mentioned to his co-host David Arnsberger that he wasn’t feeling well. And during the broadcast he actually sat down at one point, something Larry never did. It was a real warning signal to anyone who knew him, but none of us expected him to actually die, he was just too much a part of things. But that brings us back to that horrible Friday morning, and the on air announcement of his death.

Larry is survived by a brother in Indiana, a daughter and two grandchildren and any number of other relatives. But for those who were around him the past few years you had no doubt who his soul mate was, it was Austin photographer Ave’ Bonar. The last time I saw Larry alive he told me the story of how he and Ave’ got together and not surprisingly it involved radio shows and Austin musicians, the other true loves of his life. I won’t go into that story now, it’s something I will keep as one last glimpse into a fascinating person, and one who changed the world around him. Not in huge headline making ways, though Larry did sometimes make headlines. But in the little things that only someone who is welcomed into your home the way a good DJ is. He was in our living rooms, in our cars and in our lives for years. Austin won’t be the same without him, but it was changed by him. His dream of putting Austin music on the air was realized long ago, but Larry was just too damn busy having fun to sit on his laurels. So here’s to you my friend, I wish it were all just some Phil Music excuse for why you’re not here. But we’ll all be standing in, remembering the voice of Austin music…..

“This article was originally posted on the Keeping The Public In Public Radio website”.