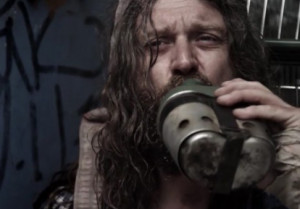 Squizzy, guitarist for Melbourne’s King Parrot, and I caught up at Reggie’s in Chicago on their North American Extinction Tour with Dark Sermon, Black Crown Initiate and Cattle Decapitation. Afterwards he graciously answered my questions about the new album and Housecore. I hope you enjoy his Australian dialect as much as I do, as well as his acting chops in King Parrot’s new video Home is Where the Gutter Is. 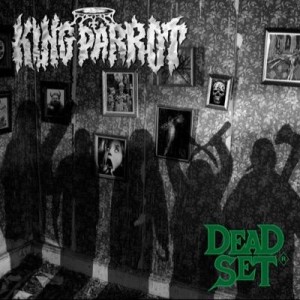 Madame X: I noticed more groove on this new album, Dead Set. What else about the south and working with Phil is rubbing off on you?

Squizzy: I wouldn’t say it’s due to hangin’ in the south or with Phil that influenced the groove aspect of the songs on the newy, especially considering about half of those songs were in their formative stages when we were back home in Melbourne and the other half were formulated in a barn in Vermont. The deep n’ wide pool of experience Phil brings to the table is massive too, so it’s hard not to wanna take a dip in that ocean of wit n’ collective wisdom! The songs probably turned out as they did due to more of a shared group effort although there is a certain indefinable charm you southerners possess that appeals to our laid back Aussie sensibilities. P.S. We are from the real deep south! 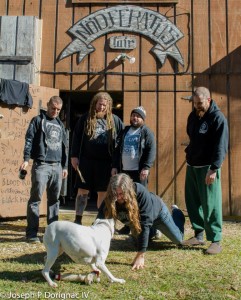 X: What do you love about American metal? Have you considered moving to the states?

Squizzy: I haven’t really considered movin’ stateside as yet, but ya never know? Personally, I’ve always had a soft spot for U.S. metal and you guys continue to pump out super high quality bands of every eclectic way, shape n’ form (just check the Housecore roster for some primo examples!).

X: School us on which Aussie bands are important to you, and why?

Squizzy: AC/DC, AC/DC and AC/DC. No explanation necessary! Or if you do need an explanation then I suggest you do go back to rock n’ roll high school! Nuff said.

X: In the past King Parrot played Housecore Horror Film Festival. What will you say about HHFF?

Squizzy: HHFF IS THE SHIT HOTTEST FEST TICKET GETTIN’ ROUND! It may be in its infancy, but already this upcoming outing boasts one of the sickest lineups yet! A great many and varied and highly revered acts (both film and musical) are gonna cave ya’ horror filled heavy metal heads in. Sadly, we can’t attend this year and I’m sorely disappointed, because last year’s was the absolute tits!

X: Are you playing any other upcoming festivals or events that we should know about?

Squizzy: We are currently nearing the end of our North American tour showcasing a lot of songs off our Housecore records album Dead Set and supporting Cattle Decapitation with their Anthropocene Extinction album. Two other great young U.S. bands on the bill are Dark Sermon and Black Crown Initiate. Snazzy package all round. So don’t be a wimp! Get off the couch and broaden your horizons and pop in n’ thrash out! After this we will probs head home for a short break and recoup for a tad. We’ve been pretty constantly on the road for the best part of two years. There’s definitely some hot shit in the pipeline but I ain’t lettin’ the cat outta the bag on any of it just yet mate! Ha Ha!

X: Your live performance is something to behold as all the band members are going all out, and there is Youngy running all over the place exposing his rear…What fuels this intensity?

Squizzy: I think we were just all pretty fed up with seein’ poxy note perfect noodlers, offering little more than a whiff o’ their latest shampoo products and a load of ol’ wank tune-wise. We all like old punk and thrash and gutsy fast attacking shit. We’re also not fans of complacent, too cool for school crowds, so we like to shake that shit up sometimes to the detriment of ourselves! 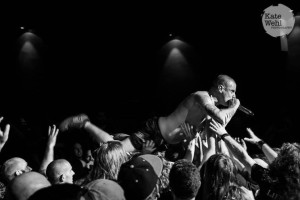 X: Your shows have a tendency to rile up the crowd. In light of the arrest of Randy Blythe, how do you protect yourselves from liability, especially when traveling overseas?