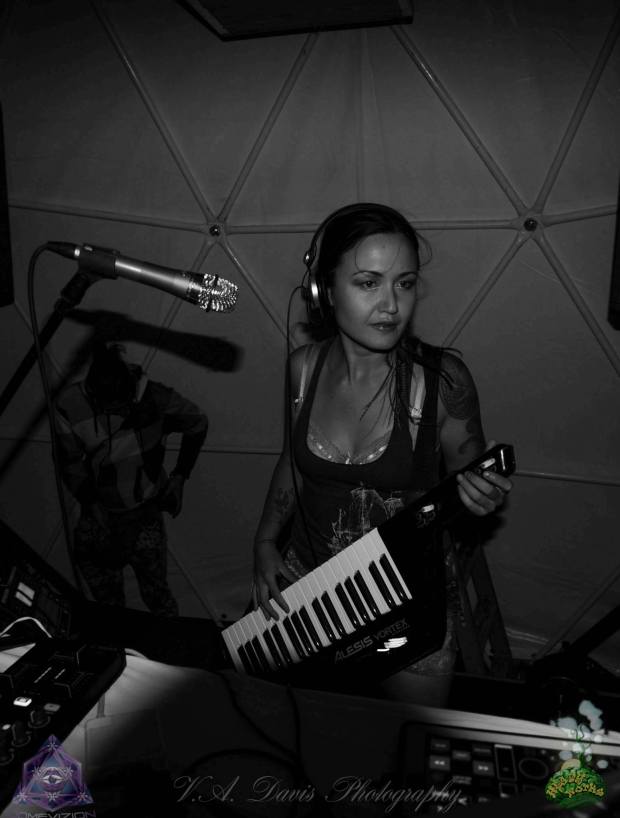 Earlier this spring I had the pleasure to interview ill-ēsha. Music producer, vocalist, songwriter composer, DJ, musician and more; ill-ēsha radiates artistic talent and the more I read her artist’s bio. It was very clear what a vast range of art forms within various industries that her skills could be applied to. On April 9, 2017—ill-ēsha performed at the 2017 Euphoria Music Festival at Carson Creek Ranch in Austin, Texas. Euphoria Music Festival is showcased over 70 artists this year and even though ill-ēsha has visited ATX many times for festivals like SXSW and feels at home in the capital of Texas. This was her first show at Euphoria and Austinites were delighted.

Formally known as Elysha Zaide and casually known as Elle, “Vancouver-born and Colorado-based music producer, artist and DJ ill-ēsha has crafted a long-standing soundscape of electronic bass music throughout her career, continuously evolving her musical stylings and bridging gaps between hip-hop, dubstep, R&B and future bass music. Ill-ēsha is recognized as an extremely rare and diverse, burgeoning artist in the EDM scene, as her live set showcases her incredible talent to sing, DJ, and simultaneously rock her keytar. She is one of few electronic artists to blossom throughout the progression of different musical trends while still focusing on her artistic vision and authenticity. Constantly evolving a dynamic stage show, ill-ēsha is a perfect example of electronic music’s transition towards live instrumentation and indie pop sensibility.” 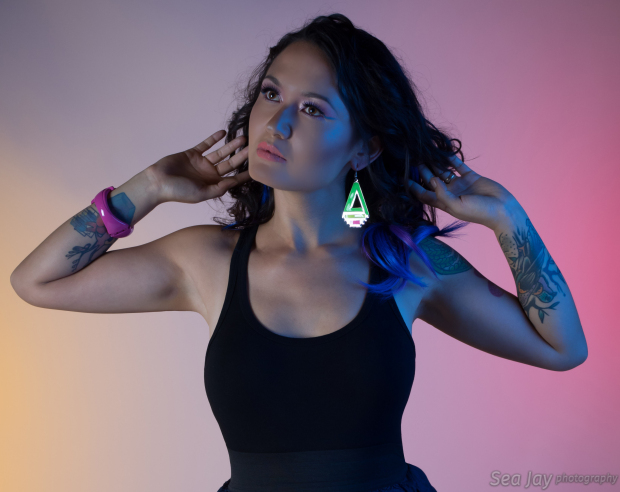 Nicolette Mallow: You have one of the most interesting music backgrounds out of all the composers I’ve interviewed. Your skills are so vast and you’re so musically gifted. A producer, DJ, vocalist, composer, songwriter and more. I loved reading your Bio… Did you always know you wanted to make music? Or did music and the arts choose you?

ill-ēsha: I was always very drawn to many different forms of art. As much as I loved music. I was also into theater arts and that was a potential path for me. Even in high school when I was already DJ’ing, I also partook in a theater company and visual art. Performing arts was my artistic expression for a long time. But yes, I’ve had a tendency towards the arts since I was a kid. I was born into a  family with lots of artists.

NM: I read you love classical, world jazz and cinematic music—and that you completed Royal Conservatory piano training. That program sounds so fancy and challenging. Is this where you began to learn music?

ill-ēsha: (she laughed) Well, it sounds fancier than it is. It’s just another method to learn music, like the Suziki method. Royal Conservatory is simply one of many systems similar to a competitive sport or grade levels. The more you learn and excel at each level you pass on to the next. My mother was passionate about piano and she always wanted to play. I began taking lessons at 4 years old. I continued to take piano classes until I was 12.

NM: You have a spectacular voice. I loved the demos, especially the animation video… How did all this begin? Can you tell me a little about Speech Level Singing?

ill-ēsha: Seth Riggs created Speech Level Singing (SLS) in the late 70’s. It was a school of thought to help train vocal muscles. Artists like Michael Jackson and Aretha Franklin studied it. Since I am a self-taught vocalist after years and years of rigorous piano. In my 20’s I got into Speech Level Singing to learn how to control my breath better. SLS was sort of a style that purely worked out your vocal chords. It appealed to me because I am not jazz or an opera singer. I’m not an Ariana Grande or Celine Dion with a big, booming voice. I am a musician of all types, not just vocals. Once you have a voice: you go all directions developing it and SLS was a way of developing mine.

NM: What did it feel like to place in the top 3 finalists for The John Lennon International Songwriting Contest?

ill-ēsha: That was a long time ago, but the coolest thing about that award is I was given a few hundred dollars and I used it to buy my first Serato. (A DJ program with turntables and a laptop.) Up until then everything was pure vinyl, so, thank you John Lennon Songwriting Contest for helping me buy my first Serato. But yeah, songwriting is something else that I do. My roots is songwriting.

NM: What is the title of the lyrics you wrote and submitted for the contest?

NM: Vancouver is your hometown and I hear it is beautiful. I hope to visit Canada next year. Now that you’re based in Colorado, do you feel like it reminds you of Canada in any way? I would imagine it’s easy to miss the seaport of Vancouver but the climate in CO perhaps reminds you of home?

ill-ēsha: It’s 50/50. I love the mountain life in Colorado. Before I moved here, I lived in San Francisco. Honestly I considered moving to Austin because I love it so much there, too, but I chose Colorado.

NM: Speaking of Austin, how did you come to be involved with Euphoria Music Festival? And what can we expect to enjoy during your live set at the festival?

ill-ēsha: ATX is one of those cities that’s been supporting me for a long time, all the way back to my tracks with Gravitas. Over time I’ve interacted with most of the promoters. I feel very lucky to have played at SXSW and so many other venues. Austin has become a home for me. Really I was torn between Denver and Austin. Ultimately, the weather in CO won me over. But I love Texas and I feel like its one of my strongest markets. It’s very cool to be involved with the music scene in Austin… Euphoria is one of the first festival types I’ve performed, and I will be sharing a lot of new content. Anyone who sees me, even old fans, will have something new to look forward to. Over the years I have evolved. Now that I make so much music in the last few years. What I’ve found is that I want to divide the sets I do and remain conscious of the environment. Live shows are compelling and people enjoy festivals. But for instance, nightclub people want the DJ energy. They want to dance and they want the drum and bass. The booth is tall and people can’t see me or my live set up, they just hear me and my music. However, festivals are more intimate with an open stage. There are more live elements, like my keytar. I’ve been taking a lot of time in the studio to write, collaborate and create new art to suit the time and place of each set.

NM: Will you tell me about your transition from DJ to headlining performer and Producer? I liked your quote about wanting to participate in the music and not just the culture.

ill-ēsha: I’m not much of a bystander. I enjoy art from being part of the process. I love film but I don’t actually sit around for long periods of time watching movies. I want to score and write for them. I wanted to be part of it. I started off with singing and DJ’ing. I wanted to control beats and make music. The deeper I got into it, the more deeply I realized I wanted to be part of production… About 10 years ago was sort of the turning point. All in all I’ve been in this industry for 20 years, since I was really young. The first ten years were very much passion projects and you could really tour and do live shows. I worked other jobs, too, and went to college. Touring and other jobs helped pay off student loans. Right around 2008 or 2009, I started feeling discontent. I was not feeling inspired. So I decided to go back to music as contractor and post-production for TV shows and editing. I regenerated and began making a new style of music. It was fun and different. It wasn’t simply drum and bass. At that point I just kind of discovered new people without the pressure. Re-inspired an online chat forum and people became receptive and started signing it. And that’s when I moved to SF and production became a full time priority… Ultimately my passion project and my true underlying goal is to give back and inspire young creative people. I was sort of an angsty teenager. Bummed out by life. Music saved me. Being a mentor, a guide and to give connections to the young artists and young creatives means a lot to me.

NM: What was it like touring with Bassnectar? I adore his track “Butterfly” featuring Mimi Page and listen to it all the time.

ill-ēsha: Touring with Bassnectar was pretty magical. I feel so lucky I got to experience that. It was only a few Southern tour dates and New Year’s Eve shows. I loved it though! Bassnectar is a big symbol of my music scene. Bassnectar created the west coast music sound within the DJ world. It was an honor to get to open for him. This is the guy who took it from A to Z.

NM: Last question, listening to your music on SoundCloud I heard a track called“Ghostwriter” with opening audio talking about computer hacking. Why did you choose to write about a computer hacker?

ill-ēsha: In the 1990’s there was a children’s TV show called “Ghostwriter”. A lot of the samples in that track are from a single episode that I found to be cute. “Ghostwriter” was an educational kid’s show and that episode was about early internet. Teaching kids about hackers. At the time I was learning more about computers and I definitely enjoy digital nostalgia of different era’s because I’ve been through them all. As a child of cross generation analog and digital and I remember both… it’s always on my mind. 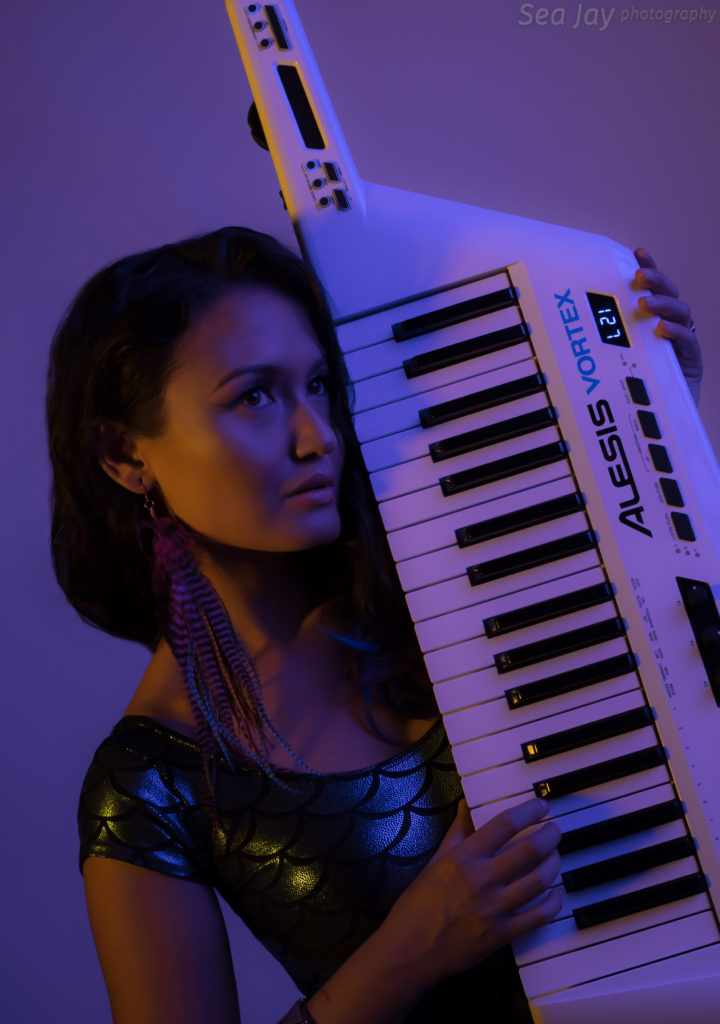 For more information about ill-ēsha:  please visit her website at www.ill-esha.com. To listen to samples of her music please visit ill-ēsha’s SoundCloud page at https://soundcloud.com/ill-esha.