WW: You guys recently headlined the GWAR BQ up in Richmond. How awesome was that?

Digestor: Incredibly awesome! GWAR Cro-Mags, MC Chris, and the Descendents? How bad could that be?

WW: Are you guys in contact with Oderus via the intergalactic airwaves? What does he think of your Ghoulish band?

Digestor: While he was on earth he was a great champion of ours, but I think now that he’s in Valhalla he’s probably more interested in whatever flagons of mead and slatternly whores he’s getting served up. He keeps pocket dialing me and all I can hear are sickening splooshing sounds, like a boot being pulled out of a marsh.

Digestor: That’s right. We three original members met in the graveyard outside of Creepsylvania; each one searching for a place to belong, where we could dig up corpses and eat them in peace. Dissector slithered into our lair in the catacombs in pupa form, and hatched before our eyes with an insatiable hunger to learn how to play the guitar. That lasted a day or so before he discovered beer. But during that day he learned like, 5 scales!

WW: There have been rumors that Ghoul is comprised of members that have pretty hefty metal resumes. Can you tell us some of those previous bands?

Digestor: I own at least 5 pounds of metal, mostly in the form of collectible smashed pennies, if that’s what you mean.

WW: Ghoul has been around for quite some time (2002), although it seems that you guys have really been growing in popularity the past couple of years. What do attribute this to?

Digestor: A decline in the musical taste of the American people.

Digestor: We have no choice! I don’t know why it’s outlawed. It’s been like that since the 80s. I’ve heard it has something to do with the song 31 Flavors, by Sacred Reich. Imagine, a single song resulting in the banishment of an entire musical form! Must be pretty bad! 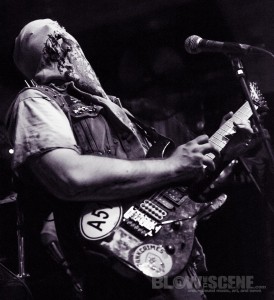 WW: Do you ghouls wear hoods because your faces are too terrifying for humans to look upon (since syphilis ate away most of the soft tissue of your face, Cremator is missing the lower half of his face from the kiln explosion, etc.)? Will Ghoul ever expose their true identities and horrible visages?

Digestor: Yes, our faces are horrifying to behold, so we wear masks. It allows the audience to focus on our music, and not the ridiculous spectacle of a bunch of mutant freaks jumping around like imbeciles, so no, we will not be taking them off.

WW: How did Ghoul hook up with the Curio Shoppe Owner, Mr. Fang? Does he supply Ghoul with opium? Are the cursed monkey paws still on sale?

Digestor: I had to duck into his shop to avoid a torch wielding mob, but even though he took me in, Mr. Fang turned out to be even sleazier than us. Along with the other curios in his shop he was selling animal husbandry photos, irreverently sculpted “water pipes”, Dutch child horticulture magazines, and counterfeit Creepsylvania High School hall passes.

WW: What powers did the Mezmetron give you? Or is that info top secret?

Digestor: None, aside from allowing us to transmit images to lonely dorks in the backwater shitholes of your pathetic country. 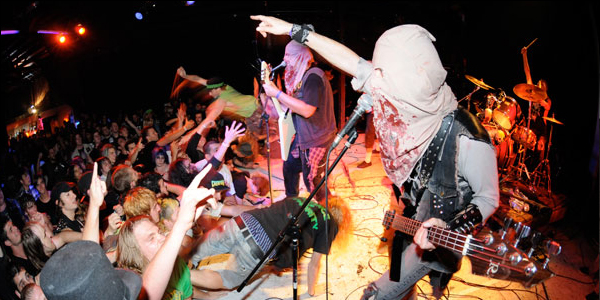 WW: Why do you think all of your human fans are numbskulls?

Digestor: Look at them!

WW: What is Ghoul’s ultimate goal?

Digestor: All we want to do is to be left in peace to murder the citizens of Creepsylvania. Also, I’d like for the band to appear on the officially licensed Creepsylvanian version of Sesame St., “Cabbage Cul De Sac”. The producers won’t write me back. Maybe I’ll have to pay them a personal visit.

WW: What is a Werepig? Is the Mutant Mutilator their leader?

Digestor: The Mutant Mutilator was the only werepig I’ve ever known. As far as I know it’s a creature too stupid to actually exist, but there it was.

WW: Why is Killbot’s sole purpose in life to ANNIHILATE GHOUL? What do you think Ghoul will have to do to be able to destroy Killbot?

Digestor: It’s not his fault. He was just programmed that way. 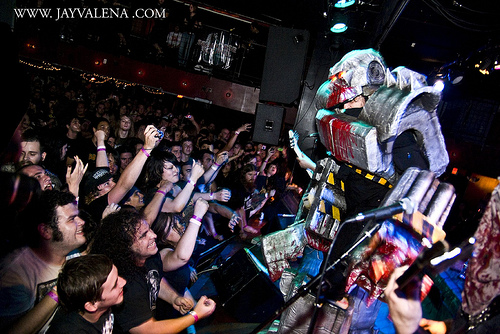 WW: How did Killbot come into possession of Walt Disney’s cryogenically frozen brain?

WW: What are your top 3 album picks from your thrash metal collection?

WW: When and why did Cremator decide to start writing an advice column?

Digestor: He’s been doing that for years and years. I don’t know why. Boredom?

WW: If we could take a peek at Ghoul’s rap sheet, what are some of the crimes we would see listed? 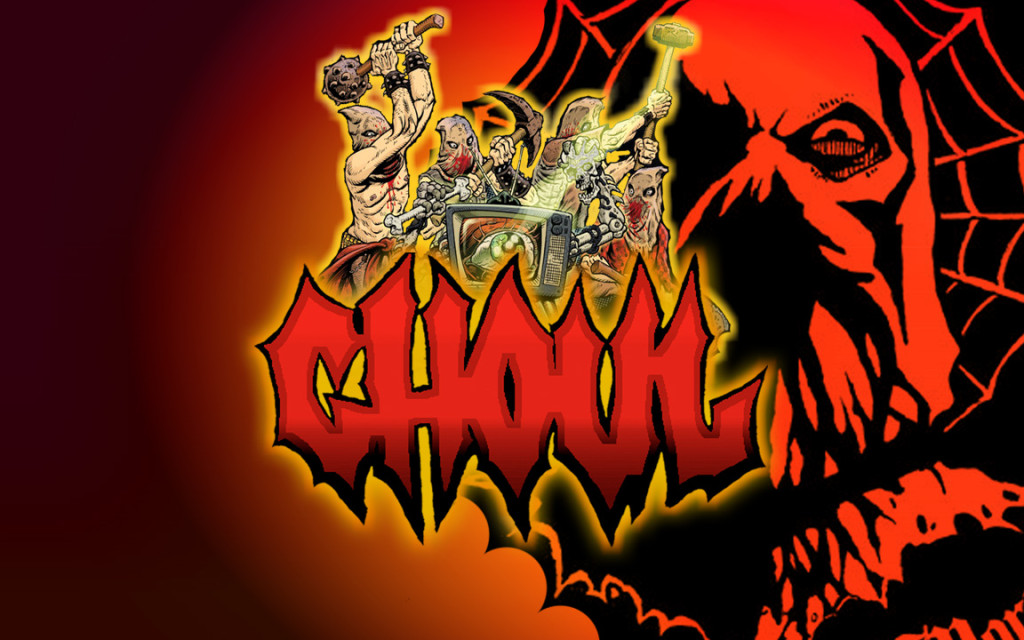 WW: What is Ghoul’s relationship with Zuryalda, the former Gypsy turned Swamp-hag that allegedly cursed Creepsylvania?

Digestor: She’s my girlfriend, so back off.

WW: How long has Ghoul been with Tankcrimes Records? How did you guys hook up with them? I really dig that Ghoul still takes pride in releasing actual vinyl!

Digestor: We’ve been with them for almost 10 years. I keep asking them to put out our stuff on a real format that the kids love, like wax cylinder, but so far they won’t bite.

WW: Your most recent release is Hang 10, released in 2014!!! How has that album been received?

Digestor: It’s been received and confiscated by law enforcement agencies around the world, with the help of Interpol and the WHO. 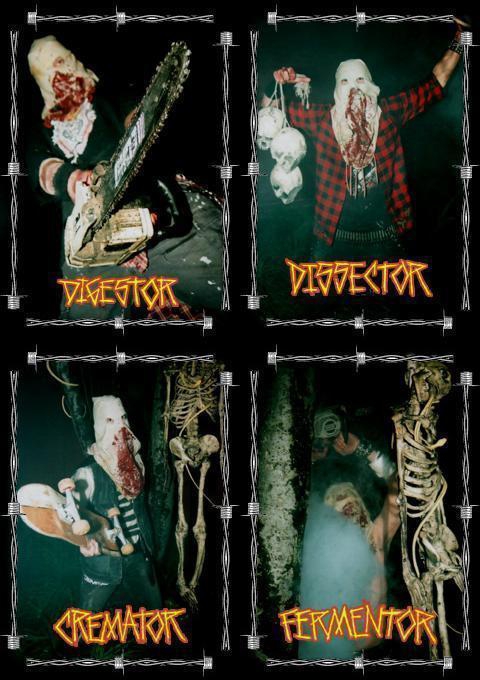 WW: Is there a new album in the works?

WW: Who does the  ghoulishly macabre artwork on your albums and merchandise?

Digestor: A bunch of different people have done the album art, including Sean Aaberg, Jake Karnes, Bill Hauser, Greg Oakes and Nor Prego. Mostly I do the art for the shirts, but not always.

WW: Any Ghoulish pranks or tricks planned for this coming Halloween?

Digestor: Yeah, we’re going to poison the water tank at the Creepsylvania Medical Center. What puckish scamps we are!

WW: Are you guys excited about playing the Housecore Horror Film Festival in Satantonio (boo!)  Texas this year? Do you know the date and your set time yet? I don’t want to miss it!

Digestor: Yes we are, no we don’t, and I know you’re going to miss it!

Digestor: We are going to turn your country into a giant river of gore.

WW: Final words of wisdom to all of Ghoul’s rabid numbskull fans out there?

Digestor: Wear a condom. Always. Never take it off. Your dick will eventually get infected and fall off, and then you won’t have to worry about buying or wearing condoms anymore. 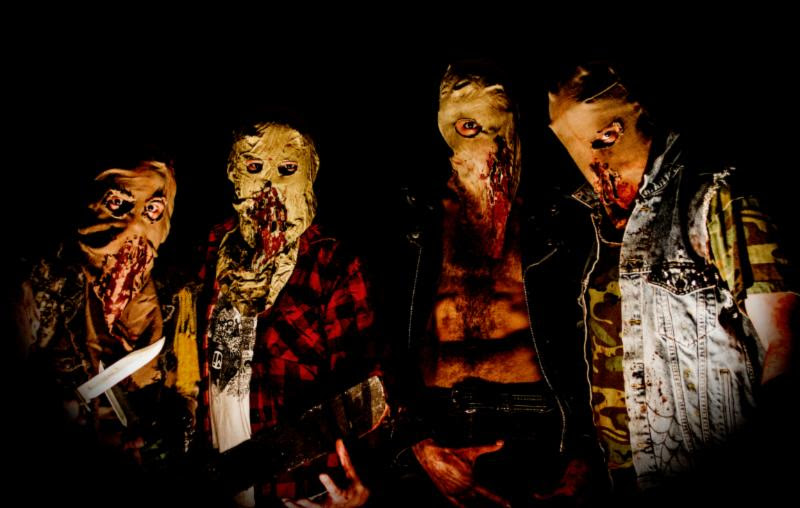 Check out Ghoul doing Bury the Hatchet! (live) at

This shit is awesome! You can find more Ghoul at their official website:

and on their official FB page:

They will be playing Phillip Anselmo’s Housecore Horror Festival III at the Aztec Theatre in San Antonio, TX on November 13-15, 2015.