The Hardest Working Man in Show Bizness, a title attributed to several long time Austin musicians. Where as Davy Jones is referred to, it fits. He has been in Austin Bands since the late 70’s including but not limited to, The Ideals, Big Foot Chester and the one most people connect him with, The Hickoids. 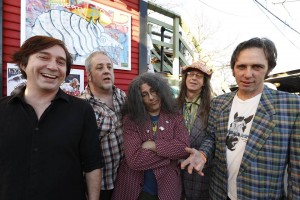 Once known as one of the crankiest men in town, is now one of the nicest men in town. You will usually always get a smile from him, and some of his personified wisdom. Davy has opinions, he is not afraid to share them. A good old fashioned rant from time to time never hurt anyone.

He is also a musician who knows his music history per fellow musician Ty Gavin. “Davy, he is the man to call if you want to know about a record, when you are stumped you can probably find out from him and it’s rare that he gets stumped. He loves the music and loves knowing all about the music.” Ty Gavin also states that this is one hell of a guitar player, “Davy is one of the best songwriters and guitarists that I have sang with over the years, he kept me running hard and lean. He has some songs that few have heard and that are really great. I learned some cool stuff from him.” 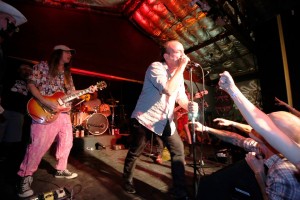 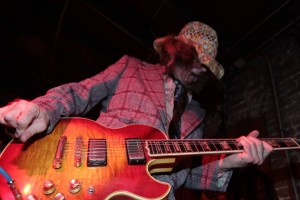 Another fellow Austin musician Pat Doyle relates a story about being on the road with Davy and Richards Hays. “I briefly played drums with the Hickoids and did a short southern US tour with the band in 1986 or 1987. The lineup included longtime friends & band mates Davy and Richard “Dick” Hays. One night we played a gig in Athens, Georgia opening for a popular local Beatles tribute band called Strawberry Fields. The club was located directly across the street from an Athens’ police sub-station. After the show and too many drinks on the house, we began loading my van with the Hickoids’ equipment. I can’t remember what started it but by the time I got the van pulled around Davy and Dick were shouting at each other, something about the money split and the headlining act’s decidedly not-punk rock schtick. No doubt Dick was pushing Davy’s Beatle-hate buttons, he was good at taking the opposite position on something for argument’s sake. (Dick had a music degree and a head as hard as an ox.) So we loaded the van, and Jeff Smith, Jukebox, and I climbed in. Then the argument got physical, Davy took a swat at Dick, who grabbed Davy by the hair, and the fur went flying like a couple of alley cats. I shouted at them “we’re in front of the police station guys” as they rolled into the street. We all kept yelling at them “get in the van!” but they wouldn’t, so we shut the doors and drove away. After circling the block they were still going at it, now in the middle of street, so I stopped in front of them and turned on my high-beams, which finally got their attention. Luckily we were all able to make a clean getaway without any police action (the sub-station was probably closed,) with Davy and Dick licking their wounds on the way back to our digs. 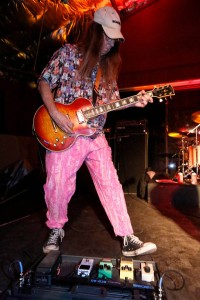 Davy is a friend to many people including myself. He is also a fashion maven striking out into the world in multicolored suits, paint splattered boots and a hat to match. People new to Austin may find this ensemble to be garish but it’s not. It’s a time and trued expression in Austin to be whoever the hell you want to be (maybe not for much longer but it still clings a little like body odor). Davy is so much himself in his suits and matching accouterments that a stunning guitar to match anything he can come up with was made. 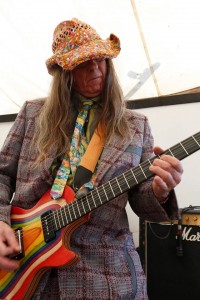 The main thing to know about Davy is that he is as much a part of Austin and it’s musical heritage as Austin City Limits or SXSW. He has been pushing out music for over 40 years. That is longer than some of the people who now come to Hickoids shows have been alive. He deserves our love and respect, he also needs our support. As I have said before, when someone in Austin is in need, it’s up to us who live here to offer it.  Here’s to Davy Jones an all star Austin citizen and musician. Keep it up! We love you!!! 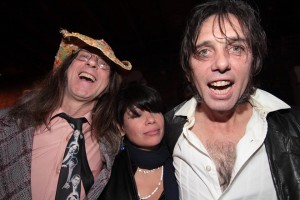