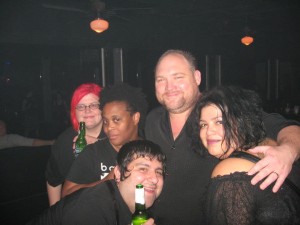 Your hosts for the weekend from left to right: Lucy Roman, John Wickham, Mary Milton, Cassandra Davis, and Aleks J down in front

Prepare yourselves, Texas. Convergence XIX, appropriately titled ‘The Gathering ov Bats’ will descend upon Austin, Texas the weekend of April 18th through the 21st.  Started in 1995, Convergence is the annual meeting of members of  the alt.gothic scene to come together and celebrate all things Goth. With a weekend boasting international musicians and djs, art shows, fashion shows, panels, a boat cruise, bat viewings, tours of the city’s creepiest locales, shopping trips, designated after-party locations, and scheduled liquor runs, Convergence is shaping up to be an event the likes of which our fair city has never seen.

Incidentally, this will be the first time the annual Goth festival has ever been in Texas after a voting process crowned Austin the winner. This year’s hosts are mid-west transplants Aleks J, and Lucy Roman of ACERBUS Entertainment. Upon arriving in Austin a few years ago and experiencing the party atmosphere, they knew the next Convergence needed to be held here and began campaigning to make it happen.  While there is no official committee of Convergence, there is group of people known as the C*b*l encompassed of long-term members of the alt.gothic newsgroups. Along with being some of the festival’s longest standing attendees, these are the people who are credited with keeping the Convergence website running, as well as being a rich source of wisdom for questions that the host city’s committee may have.  As per the rules of the nomadic gathering, an all local committee puts on the festival and this year along with ACERBUS Entertainment it includes John Wickham, owner of Elysium , Mary Milton and Cassandra Davis of Secret Oktober, and as web master and general adviser, Guymon Adams. 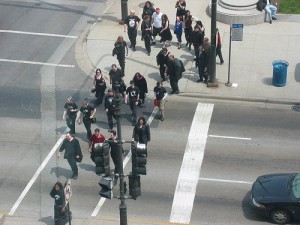 A ‘murder’ of Goth at Convergence X

When I talked to Lucy Roman and Aleks J about their upcoming venture to see how it was going and how it all came about, they were understandably a little freaked out about throwing this event. Both of them described these last few weeks as being ‘continuously on pins and needles.’ To alleviate the tension a bit, we decided to start’ testing’ custom liquor shots that would go along with the theme of the weekend. (You’re welcome, Convergence crowd! Enjoy the ‘Bat Venom, and the ‘Bat Scat!’ I was hung-over for a week after that night!)

They told me how they had each attended the festival in the past and knew some of the same people,  but it wasn’t until Convergence XII that they met and instantly bonded over the sense of community and debauchery. It inspired them to become devotees of Convergence and motivated them to bring the festival here to Austin. They agree that although they’re thrilled the Gathering ov Bats is happening here in Austin, they love the overall idea of the festival happening anywhere, as long as it keeps happening. They want to stress the importance of keeping the Goth scene alive and for wanting something as awesome as Convergence for the younger generation to keep going. 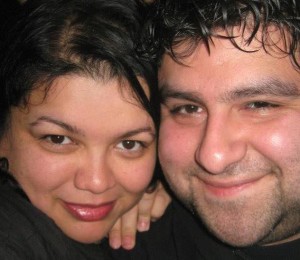 Knowing Lucy Roman and Aleks J as well as I do, I can guarantee that this is going to be an epic weekend resulting with lots of reasons to feel ashamed of yourself for the rest of the year.  (The two of them checked into a hotel here in town just for kicks, and ended up getting thrown out when some transvestite at a party they were attending started a fight with a security guard.)

I’m here to tell you: BRING YOUR CAMERAS, FOLKS!!

For more information on the festival, including ticket prices, hotel options, and a schedule of events please visit: gatheringovbats.net

This entry was posted in Event - Show - Festival. Bookmark the permalink.