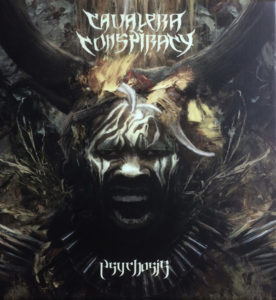 When it was announced that Igor and Max Cavalera would reunite for a new project in 2007 I was stoked. While I didn’t hate the direction that Sepultura took after Max’s departure it just wasn’t the same band for me. Soulfly also left me yearning for another Arise, Beneath The Remains, or Schizophrenia that would never come. However, once Cavalera Conspiracy got together I had a feeling that some of the Brazilian Thrash that I craved would be resurrected in some way. While I enjoy almost everything that the Cavalera Conspiracy put out I feel like this album is where they have really hit their stride. From the frantic and brutal drums of Igor to the instantly recognizable vocals of Max this album has something for everyone that is a fan of Death/Thrash metal and the Cavalera brothers.

They start their 4th record off with a track called Insane and if you are wondering, yes, the track lives up to its name. Right off the bat the guitars get off to a charging pace with Max’s dark lyrics and vocals spewing all over the break neck pace. A little over a minute in the guitars pump the breaks to give more of a grove feel with some catchy guitar parts and a nice solo thrown in for good measure. The song rides out on this mid-tempo thrash riff and eventually devolves into a bunch of noise sample stuff to end the track.

Terror Tactics is a politically charged track that rips from the second it starts. There is a small guitar solo at the beginning that immediately goes into thrash type guitar parts with Max’s vocals in the forefront of the brutality. The song stays along the lines of death/thrash metal until it gets to the middle. Samples are added and the song slows for a second to give way to somewhat ambient noises before stripping away all the sound only to build it back up over a slow plodding guitar riff. Layers of guitar solos and noises are gradually added to bulk up the plodding beats and Max’s commanding vocals. The song eventually fades back to samples as we transcend to the next track.

Impalement Execution starts out slower than the last two tracks and gives us even more of a grove like some of Max’s other projects are known for. The song keeps the slow pace until it hits the middle and then goes into this sped up dizzying spin of guitars and drums that pummel the listener over the head continuously. Eventually the speed gives way to more of a head nodding guitar riff with weird samples laid in. The effects on Max’s vocals along with the weird samples give this song a “Nailbomb” like ending.

Spectral War starts out a little slower as well, but with continuous death metal blast beats and a menacing sounding guitar always lurking in the back ground. The lyrics again go towards more sinister subject matter with Max commanding, “Open The Gates Of Hell Spectral War.” This song has more mid temp guitars with a few short solos for good measure. The song slows down a lot towards the end with a slow grinding beat which eventually turns into more weird samples that bleed over to the next song.

Crom begins with the sample bleed-over from the previous song. Once the guitars kick in, you get a slow build up with minimal vocals and some snazzy solo guitar parts before Max tears down that wall and propels the band head first into chaos. Once Max starts going, the band immediately gallops in unison with guitars and drums forming into one as they smash the soundscape. Once again, Max’s vocals are the center point and lead the attack through this song. Songs like this also put to sleep any questions on weather Igor still has the fire as this song reminds me a lot of older Sepultura type stuff. The song eventually slows down a bit and goes into an instrumental/sample outro that is somewhat common on this album.

Hellfire also starts out with samples and a guitar build up. This song never really gets fast, but the guitars mixed with the samples make this song heavy and brutal. It reminds me of something pulled out of the Chaos AD/Nailbomb era. It would make sense considering that Godflesh master mind Justin Broadrick is on this track. This song definitely has a heavy old school industrial feel to it. It is a short but awesome collaboration. The samples and slow but consistently heavy beat blend perfect with Max’s vocals.

Judas Pariah is the last song on the album with vocals, and instantly out of the gate a black metal sounding riff starts the chaos with Max’s ripping vocals following shortly after. For the first two minutes, Max and company assault the senses with bullet point vocals and razor sharp riffs. Eventually the madness subsides to a slower, but evil-sounding guitar riff and layered samples that carry into the final song on the album.

I won’t lie – album closer Psychosis surprised me. After their last song starting off as aggressive as it did I figured the title track and album closer would be the fastest and hardest song on the record. I was very wrong however and they decide to end the album on an instrumental song that probably has the most tribal melodic vibe of anything on the album. Sort of reminds of the instrumental type songs they close most Soulfly albums with. I actually really dig this song after listening to it quite a few times. The tribal intro and horns that start this song eventually give way to a very melodic and expansive song. Once the guitars break through the tribal intro they branch out in very interesting ways. Eventually the guitar parts peak and leave you in a somewhat blissful state until things start to turn ugly again. It never goes back to the brutality showcased on most of this album, but the song evolves into a heavier and darker version of itself as it winds down into ambient noise.

I like this album a lot. I know some of the weird samples that end songs and start songs may not be everyone’s cup of tea, but for me they keep things interesting. I love all the punk, thrash, death metal, industrial, and black metal influences on this album. Max Cavalera’s vocals are some of the best in metal and with him going strong 30 plus years into his career this album showcases just that. Igor’s drumming is explosive and as heavy as ever. Marc Rizzo also really killed it with his guitar work on this album. I really enjoy how this album switches pace from fast to slow and vice versa. There is a lot of variety in this album along with mostly straight forward brutality. Hardly any of these songs are over 5 minutes which is also impressive considering this album is only 41 minutes long. If you are a fan of Sepultura or Nailbomb do yourself a favor and see what the Cavalera brothers have been up to lately. Definitely one of my favorite metal albums of the year.

For more Cavalera Conspiracy news and merch click the link below: