Bible of The Devil – Feel It Album Review 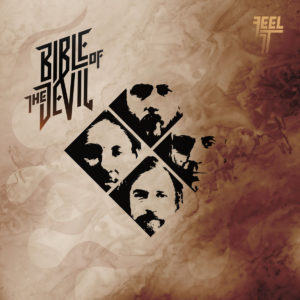 Today I will be reviewing Bible of The Devil’s 7th full length album Feel It. Bible of The Devil to me are the perfect marriage of Rock N’ Roll and Heavy Metal. The twin guitar attack really separates them from a lot of bands trying to do something similar. Nathan Perry’s vocals also help solidify and really bring together the sound of this band. This band also showcases some killer harmonies and hooks. I have enjoyed most of this bands previous output so I am excited to see what they have cooked up for us on their latest outing.

After digesting the latest offering from Bible of The Devil I am pleased to say all my favorite things about this band are still intact. Perry’s voice, the guitars, and the drums all sound great. They do an amazing job of mixing rock and roll with more traditional heavy metal sounding guitar parts and melding that into a cohesive sound that is theirs. I also enjoyed how diverse the song writing is on this album. While the songs all share a common sound the guitar parts are varied enough to keep things fresh. Bible of The Devil is catchy and riff heavy at the same time. They pull off what a lot of imitators wish they could. If Heavy Metal and Rock N’ Roll speak to you give these guys a listen. This is another stellar addition to a 20 year catalog of great music.

This entry was posted in Reviews, Uncategorized. Bookmark the permalink.