Asking Alexandria w/ Chiodos, blessthefall, Miss May I, & I Killed the Prom Queen @ The Mohawk – by Jerry Milton

A huge bill of Nu Metal was on tap for an afternoon/evening at the Mohawk.  Most of these bands I believe were on the Mayhem Festival that was parading around the US.  I usually enter the Mohawk at the back entrance which takes you right up to the deck and one that was immediately apparent by the smattering of parents on the deck, with young folks milling about….it was gonna be a YOUNG crowd, haha.

Unknown to me, this bill was originally suppose to take place at the Moody Theater.  I can only guess that not enough tickets were sold ($30 a pop), not to mention with this many bands, that would have required the Moody to be OPEN and paying the staff there for a VERY VERY long time. In any event, I’m glad it was at the Mohawk, and despite what I recall was a temp hovering around 100 degrees, for some reason it felt rather cool on this particular afternoon. The ACL Live folks (the booking entity of the Moody) were there and informed us we could shoot pics from the stairs, normally a big time no no, so things were already starting to get interesting

First up to hit the stage was I Killed the Prom Queen (400,000+ Facebook likes).  Needless to say the 16 year old crowd was ready to bust a nut. 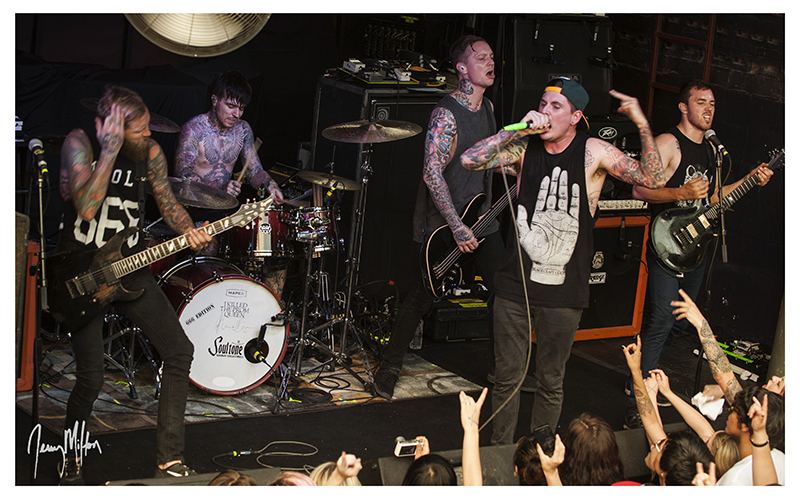 All the bands on the bill supposedly fall under the METAL category, though no metal I grew up with, that is for sure. I think their certain brand of metal is called Metalcore.  Their latest offering is 2014’s Beloved. Here’s a video from it, yo.  Melodic metal w/ a shit ton of double kick drum and a dude singing the sounds like he gargled w/ gravel for breakfast w/ the occasional horror movie voice thrown in for good measure……and wait for it, the poppy “pretty” singing on the chorus parts.  This will be the recipe for the rest of the bands to follow on this bill.

While the sun was still blazing, up next were Miss May I (1.5 Million likes) .  Did I mention these groups might have had the largest and most impressive (just by sure choices) merch for sale on the upstairs deck. Jesus tits, this video of theirs has 7 million likes. they MUST rawk.

Their 2014 offering is titled Rise of the Lion.  They tend to have a bit more of the poppy pretty singing throw into their songs that the previous blokes. As you can tell from the picture, the kids were eating this shit UP.

Moving right along, blessthefall (1.9 Million likes) hit the stage. Yes their name it is all one word, lower case please. These dudes must be slackers cuz they don’t have a 2014 release, haha. Their 2013 album has a scary name, yo…..Hollow Bodies, take an gander at said video, won’t you. 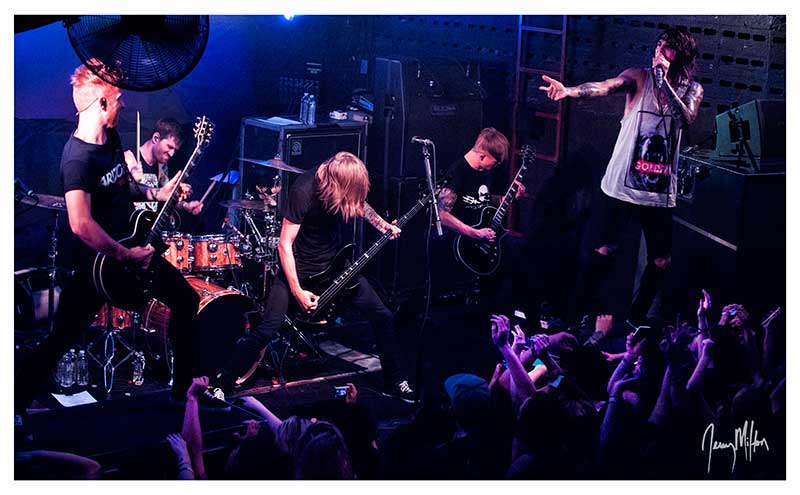 They even had harmonizing vocals at times, haha.  Their singer had the girls having spasms on the spot it would seem. A looker.  Listening to their album as I type this, and it is the most listenable so far for this old fart. If memory serves right the sun was still ablaze at this point but beginning it’s downward trajectory.

Next up on the stage from Flint, Michigan was Chiodos (with a measly 800,000 likes). They are just about to start a Mexican tour followed by Australia. Yep these bands get around. It would seem every band and their mother are headed to Australia this month, I reckon cuz it is Summer time down under, and I guess they make more money than say going to Buenos Aires. Their 2014 is called Devil. It has only the occasional death voice in the songs.  You can see what I mean in THIS video. Funny how just that inclusion makes a band METAL. Worth a listen fo’ sho and you’ll see what I mean. 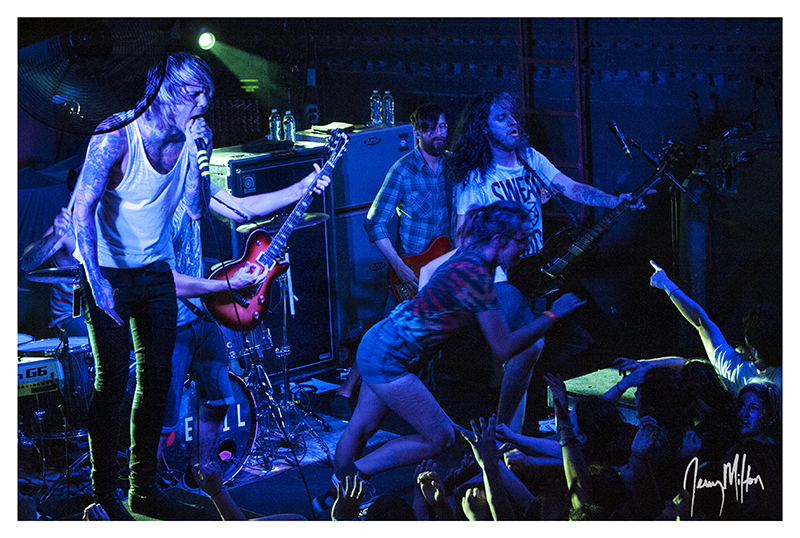 See even the girls were getting in on the stage diving. Being able to hold a note vocally had them in spasms. And without further ado, it was time for the headliner by way of the UK,  Asking Alexandria (5 million likes and climbing). It was blatantly apparent these dudes were from England cuz the singer was wearing a freaking long sleeve polyester shirt OVER another shirt,  despite the 100 degree cool day in Austin. Either he is a junky or trying to hide the extra kilos he might have put on as of late. I’m going with the latter. I’m still listening to the Chiodos album and I can only assume they are the newest band on this bill cuz they have the fewest LIKES although clearly the best offering on this night.  Back to polyester boy… 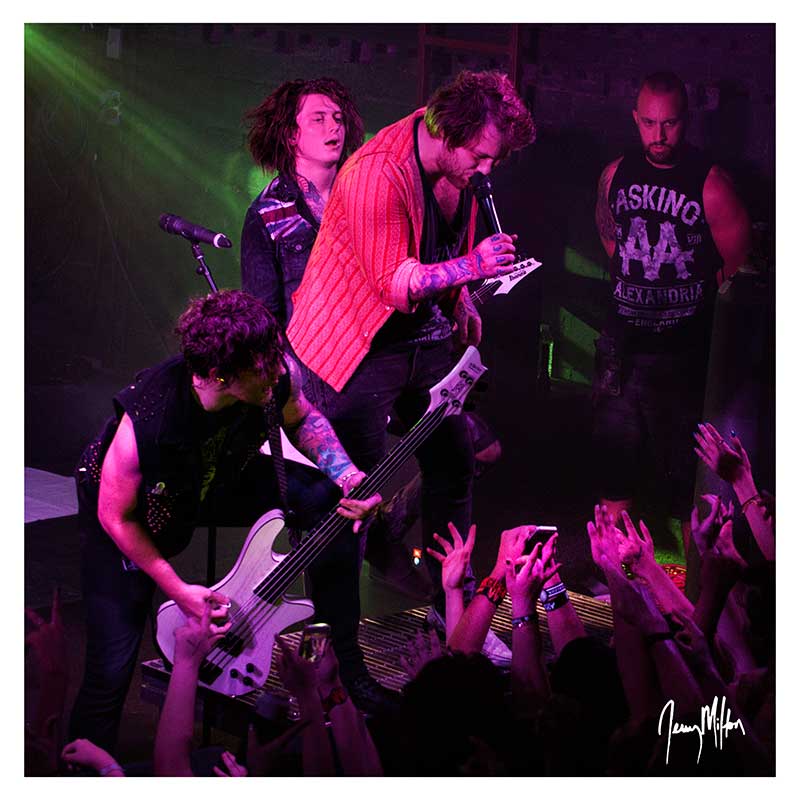 Their 2013 offering is named From Death to Destiny…scary. Did I mention these guys have some high dollar videos out too? Yep. Check it. Tattoos, beards and pop metal. Yep, I said it. Messy hair throw in for good measure. I’ll leave you with one final pic and on that note I am out. 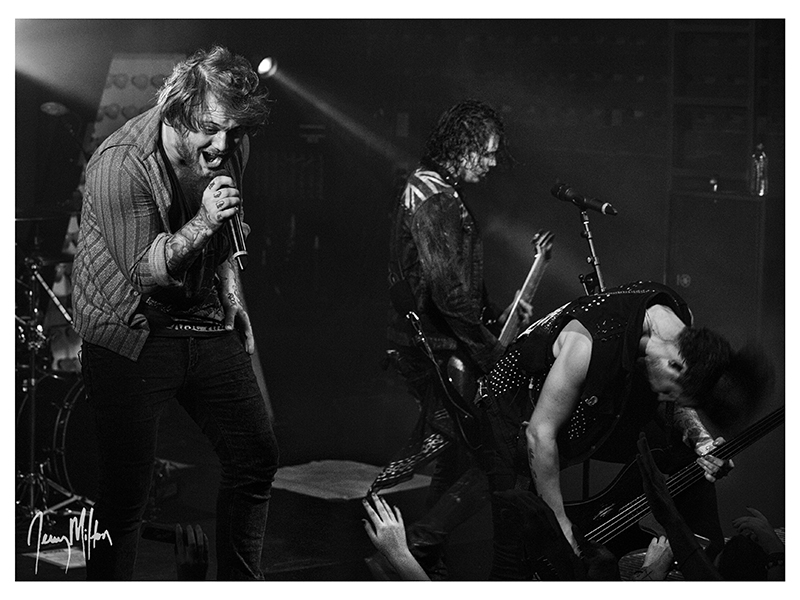