So I went to this show on Valentine’s Day, alone. Not that I wasn’t asked out, but the options were limited so, I decided to wing it solo. I had never heard of Eric McFadden, but being a longtime fan of Fishbone, I fingered anything front man, Angelo Moore, was involved with, was worth a listen. 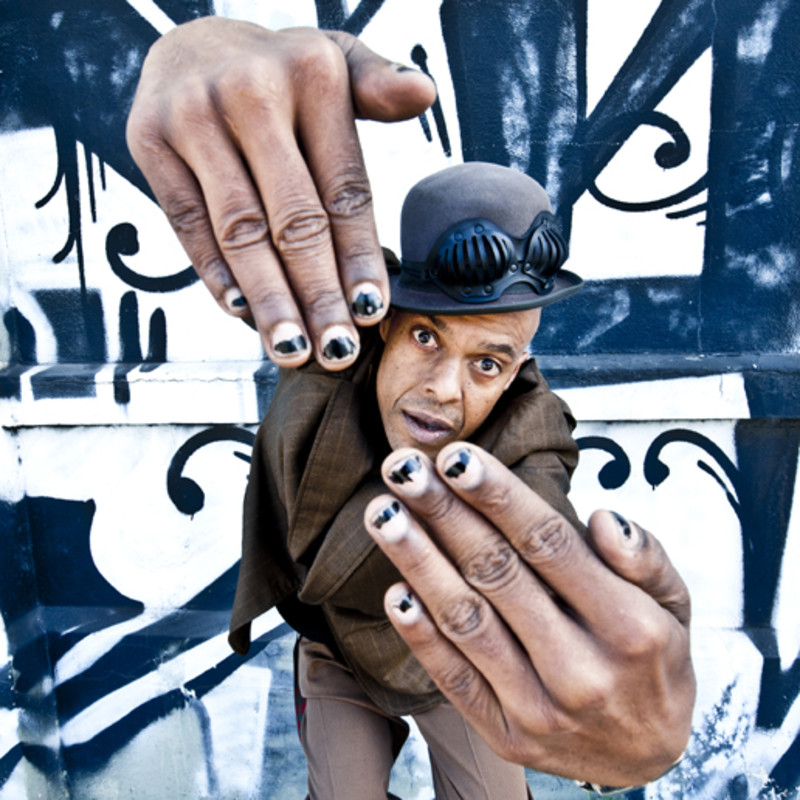 Wasn’t expecting anything super special. They were doing a line check, I was doing shots, scanning the room for my potential late date. Then they started their set, and immediately I knew there was something different about to commence. It was dark, mean, fun, funny, scary, inspirational, funky punk rock, but more. It kept growing into this beast of its own. It kept splitting genres wide open. As the songs , LOVE SONGS, kept coming, so did the musicians. I was like, “who are these people?”. They were all so gifted at their crafts. They were obviously not your average group of musicians. They were professionals. They were artists. They were actually mind blowing. As the line up kept changing, Angelo kept changing instruments. His showmanship took what he did with Fishbone, threw in a little Broadway, diversified his skill set and added a bunch of sexy class. He not only is a great front man, but has become a great sax player, and played keys, drums, and my favorite, the theremin! 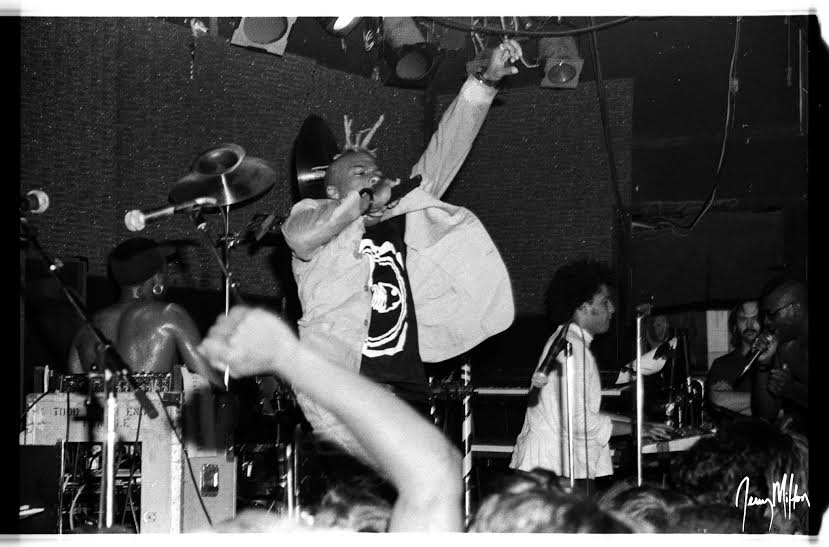 This singer/ guitar player, Eric McFadden, was good…. hot too! He was so on time. Subtle. Heavy chops with razor sharp licks that were finger lickin’. Then all of a sudden he opened the skies, and showed the world what he has hiding under his hood. OMFG! Not good, not great, AMAZING. Some guitar guys think they are all that. They really believe their 3 inches is 9. If you think you are a god, and tell people you are a guitar god, you probably aren’t. This guy is THE guitar god. I knew, halfway through his set, I wanted to have his baby. Kept wondering who is this guy, and where the funk did Angelo find him? 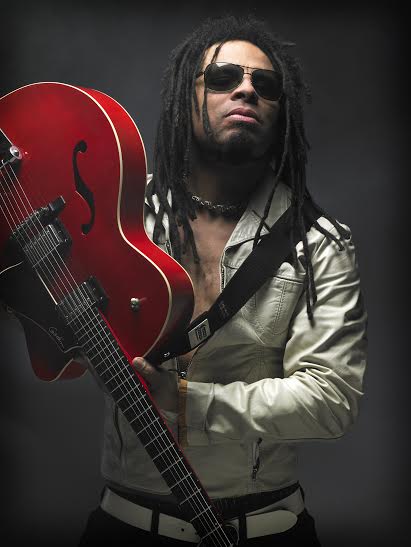 So I looked him up. MY GAWD! This guy has been around a minute. His resume is one of the best I have ever seen. I am gonna steal just one of the paragraphs from Wikipedia, so you get the idea. This is about to turn into a name dropping festival. “Other credits include three years as guitarist and mandolinist for George Clinton and the P-Funk All-Stars. In 2004, McFadden joined Stockholm Syndrome with bassist Dave Schools (Widespread Panic), singer-guitarist, Jerry Joseph and drummer Wally Ingram (Sheryl Crow, Jackson Browne). In 2005-2007, along with Wally Ingram (Sheryl Crow, Jackson Browne), McFadden joined Eric Burdon and the Animals, and toured Europe, Canada, the USA and Australia. In addition, McFadden has performed and recorded with a variety of renowned musicians over the years including Les Claypool, Joe Strummer, The Reverend Horton Heat, The Coup, Galactic, Keb Mo, Bernie Worrell, Pat MacDonald, Fishbone, Widespread Panic, Jackson Browne, Nels Cline, Mike Watt, and more. In January 2013, Eric McFadden was again on tour with Eric Burdon and the Animals through the summer of 2014. He is also touring and recording with his new super group, T.E.N. (Thomas Pridgen (Suicidal Tendencies), Eric McFadden, Norwood Fisher (Fishbone)“. So I HAD to know who else was playing with him that night. They included , Matt Hubbard ( Willie Nelson, Ray Price, Archie Bell, Billy Bob Thornton, Papa Mali, Calvin Russell, Carolyn Wonderland, Black Joe Lewis & the Honeybears, 7 Walkers),  Brad Houser (Critters Buggin, Edie Brickell), Mio Alvarado (Alice Cooper, Red Hot Chili Peppers), and other Grammy winning artists graced the stage, but my research has been stifled, as Mr. McFadden’s lineup has endorsed 100 more rotating players, on a European tour, since VD-Day. 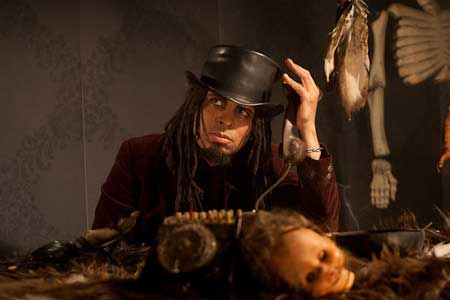 While my face was being melted off, I realized I was still dancing alone. Was zeroing in on Eric from the crowd, then someone told me Delphine, the back up singer, was his girlfriend. I immediately wanted to kick her ass, but then Delphine did a song, and she earned my respect. Backed my little truck up, and was gonna see what Mr. Fishbone had. It was Valentine’s Day after all! He bought me a drink while he was off stage for a song, and his smile melted my heart. The whitest teeth on earth! I was like yeehaw! Got me a man for VD Day! Then I caught him making out with the other backup singer! Was gonna kick him really hard, but then he smiled at me again. Melted. He was so charismatic. If you don’t feel happy in his presence then you are not human. It was getting late, and I began realizing all the hot men in the place were spoken for. I resolved to just pass out with my boots on. 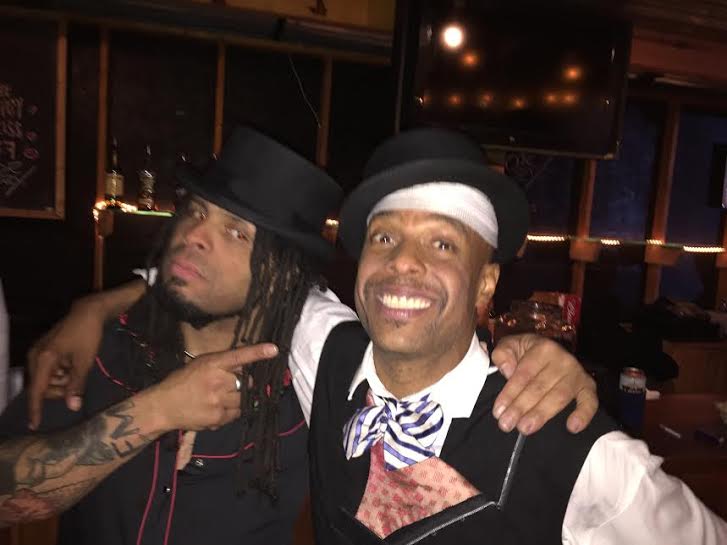 Eric McFadden and Angelo Moore at the Gypsy

However, when I woke up, I listened to the CD Angelo gave me of the his solo project, The Angelo Show. It immediately reminded me of Mike Mattingley’s (Skankin’ Pickle) masterpiece, Neosoreskin. Angelo plays everything on the record. AKA as Dr. MaddVibe, Angelo delivers funkpunkrastarap, with intelligent and political lyrics that are written with humor, and twisted up with spoken word. He is still the Angelo as he always has been. Yet more mature, and seems to see no limitations. Truly an epic performer. Here is a must see vid, that will lay it down with proper perspective.

Eric and Angelo will be playing SXSW at The Continental Club on March 19th, and with Papa Mali at Freedmens on March 20th. 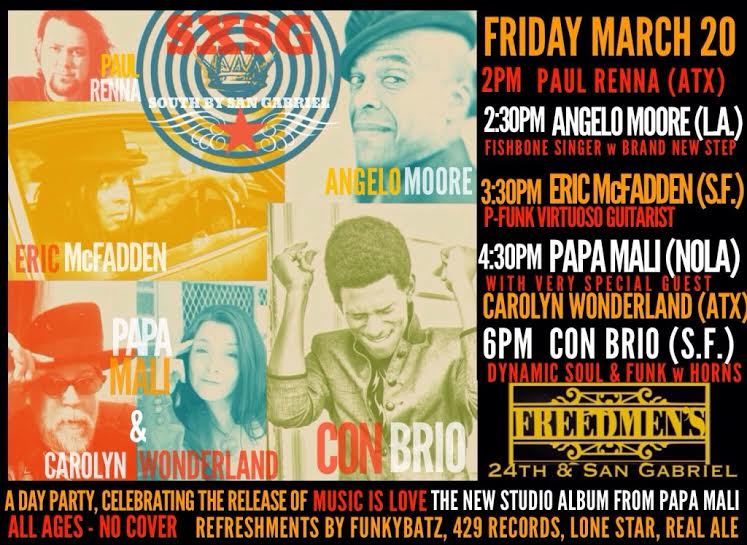