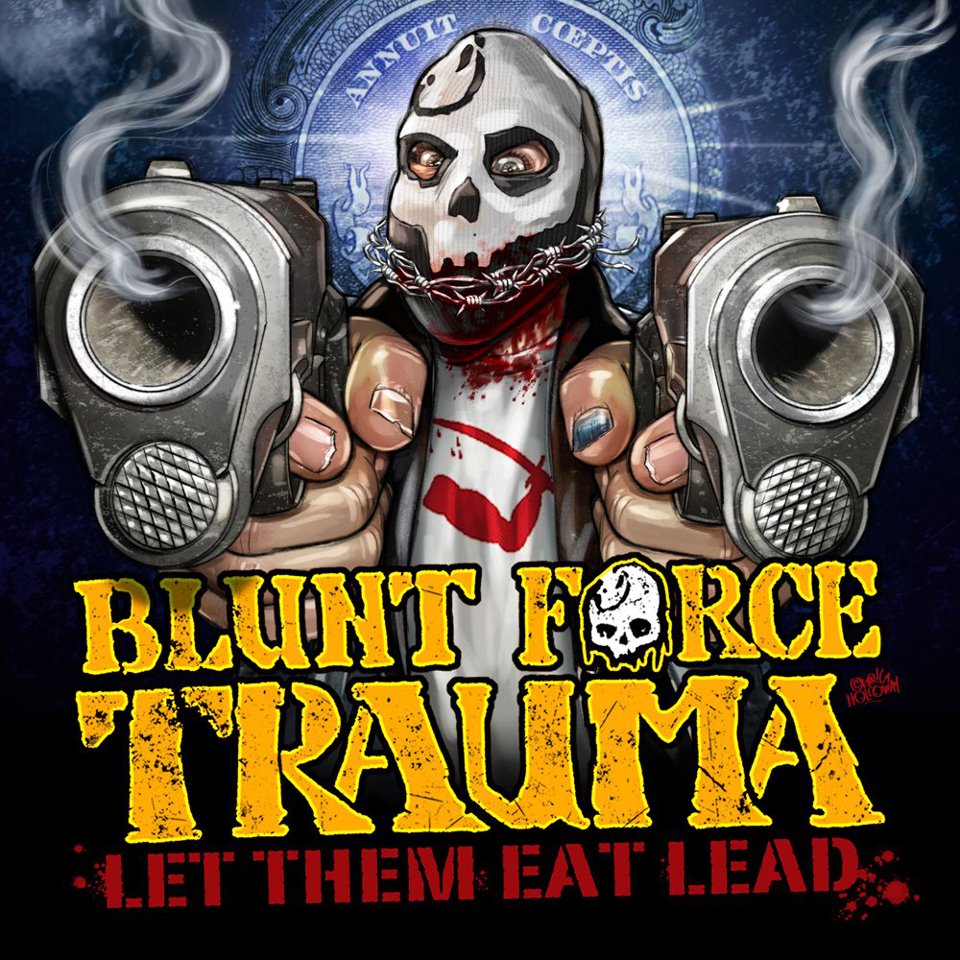 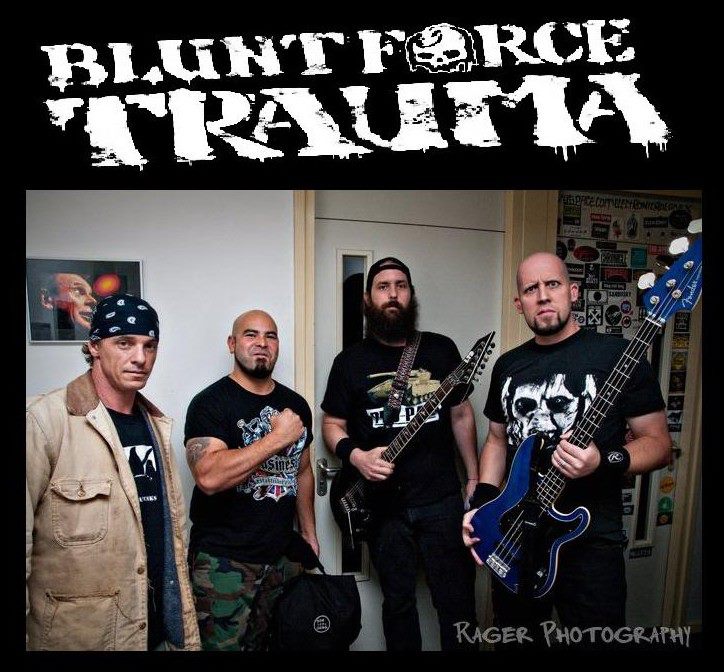 Like a fine wine or a swift kick to your solar plexus, “Let Them Eat Lead” gets your attention from note number one. Blunt Force Trauma’s 2012 release on Shattered World Records opens the festivities in their own inimitable style. Rise of the Oath Keepers is the perfect intro song. Wasting no time, BFT shows you what they’ve got. With an instrumental barrage later followed by the spoken Oath that SHOULD be spoken by the U.S. military:
“ We will not obey orders to disarm people,
We will not obey orders to conduct warrantless searches…”
Yeah, so you know what you may be in for. Hardcore thrash and unapologetic lyrics that tout freedom and make no attempt to hide their disdain for tyranny. The title track, Let Them Eat Lead, follows with the war cry that gives its name to the record and this song. The production is up front and clean, like good hardcore/thrash should be. And subtlety is not BFT’s strongest suit. Never has been, never will be.

The scalding lyrics of Bobby “Bob-O” Fuentes are concise and urgent.  Befitting the brutally tight guitar of Alan “Slaytoven”.  His style is as evil as Slayer and still as methodical as Beethoven, thus the nickname Slaytoven, I am guessing. Coupled with the razor tight bass work of Craig Holloway, the guitars are more than effective. And what can I say about Felix Griffin that hasn’t already been said during his illustrious drumming career. This guy puts on a fucking “clinic” every time he gets behind a drum kit. In any musical style. Break Down is a straight incitement to riot !! 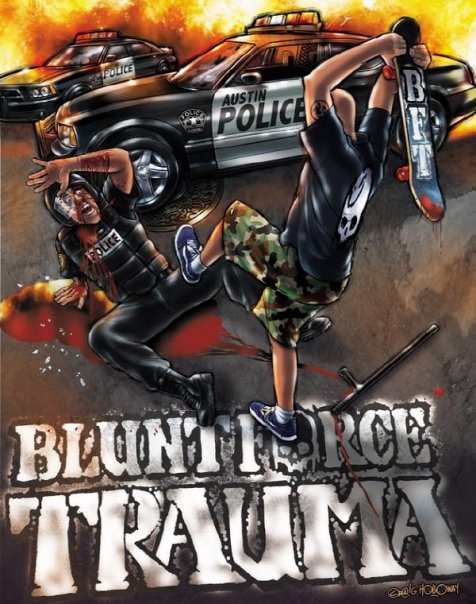 Calling out the bullshit, from  the two party voting policy in the U.S. to the oligarchic rise of the untouchable corporate entities in the world. And how do I know what the songs are about? Because Fuentes annunciates his lyrics with a clarity that is rare in  such heavy music. They also print their lyrics, and I am one of those “weirdos” that still reads the lyrics to songs. Songs like Government Lies and Tragedy Vultures  tell the ugly truths about two HUGE American institutions: government and mainstream media. BFT make no bones about calling a spade a spade. There is no gimmick here, this music is as heavy and tight as you can get, and they ‘aint singing about lollipops and rainbows y’all.

Call me old fashioned (you damn kids!), but I want the music first. And fashion has it’s place in musicdom, but it should be secondary to what the band is laying down. And, kiddies, not so long ago there was a time when politics were a driving force in punk rock and hardcore.
“ You got your politics on my music….”
“ Damn, you got your music all over my politics!”
Take a bite, America ! Politics and music are two tastes that taste great together! Criticism of the hypocrisy of world policy has fueled some of the best bands of our time. How many bands, of any caliber are singing songs like “Legislate” and “The 76’r” ? This is music to overthrow governments to. 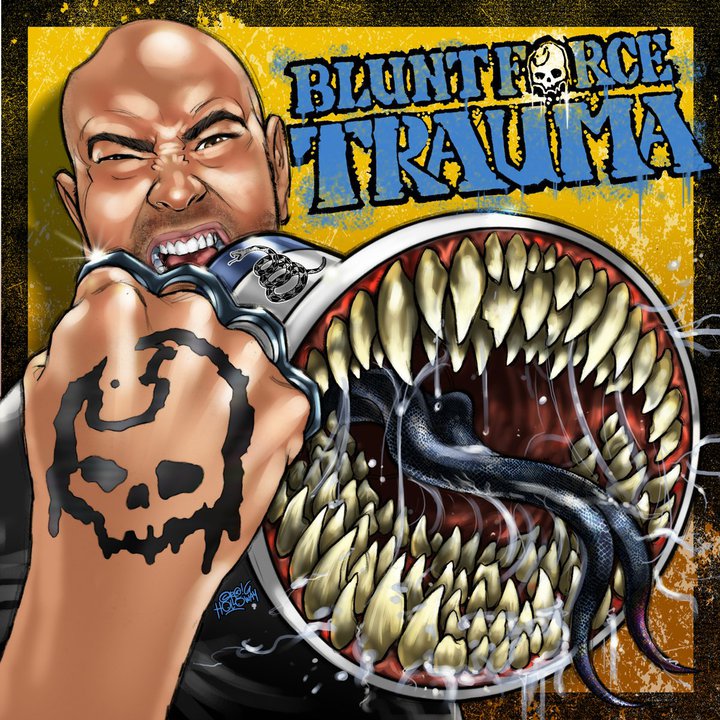 The soundtrack to flying shells whistling past and Molotov cocktails painting the night sky. Songs like “C.S.R.” and “Zips In The Wire” speak to the penal system and war, and the mental and spiritual toll they take on the citizens. If the powers that be can take your spirit and your hope, you are a goner. PERIOD. And every good hardcore record should have a good “dust up” or street fight song, and track number eight (8),  “Blood “,  delivers with flying colors. Colors that don’t run ! Nothing subtle, nothing vague. Blunt Force Trauma are on top of their game, and “ Let The Eat Lead” proves it. This is pure hardcore, plain and simple. You know what you are getting from note one, song one; and it carries throughout the record. Intensity at this level is very hard to perpetuate. A force so strong, by the laws of physics, will start to decrease eventually. 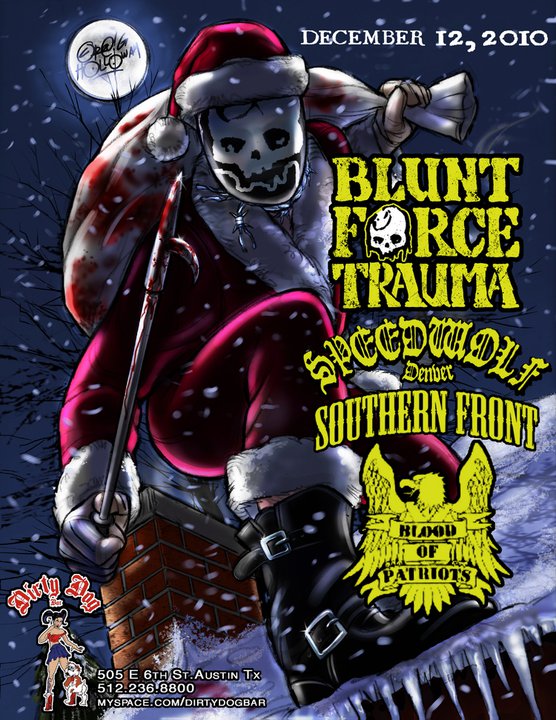 Energy expelled in such a high concentration takes some serious fuel to maintain. And Blunt Force Trauma are toting enough fuel to get to Mars. From the instrumental intro of “Rise Of The Oathkeepers” to the last note of “The 76’r ”, BFT’s latest release keeps pace and has fuel left to burn at the finish line. “Let Them Eat Lead” is the smoking gun that points to a broken system and corrupt world. Make no mistake, we are at war at home, too; and this is a record to fight it to. Musically, this record is godhead. Heavy as you please, but with the sting and power of great punk/thrash. Slaytoven, Holloway and Griffin are an arsenal, unrelenting and with pin point accuracy, that hit their mark with deadly velocity and effect. This record is the product of passion and practice. Records this good aren’t easy to come by, in any form of music. And Blunt Force Trauma, in their own words, know they are firing on all cylinders right now, and they have no intentions of slowing down. 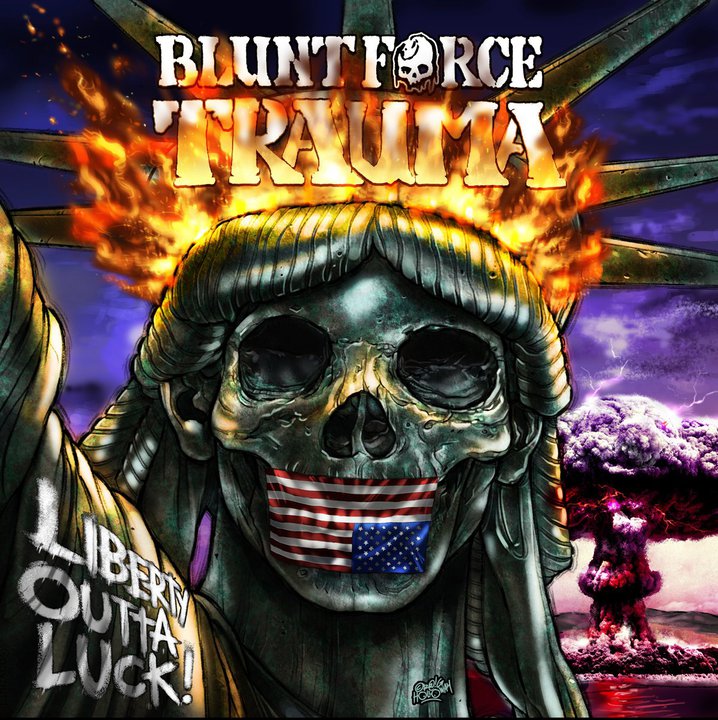 That is good news to this writer. As a singer, I appreciate the wordsmith that front man Bobby Fuentes is. Anyone that can work the line: “ Hegellian dialectic- implantation undetected“ into a song  has my vote for vocal badass. And just like the musical prowess of Griffin, Holloway and Slaytoven will make you want to grab your own guit or sticks and join in, Fuentes drops some lyrical science y’all. If you like gimmicks, schticks or bullshit, you will hate “Let Them Eat Lead”. If you want your punk rock perfectly fused with metal, thrash and/or hardcore, then Blunt Force Trauma will soothe what ails ya !
************* Justin Buzzcrusher*****************************************************