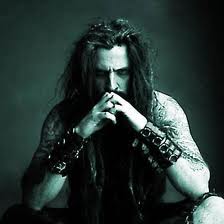 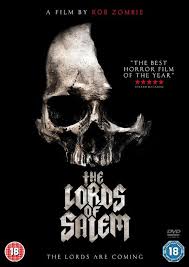 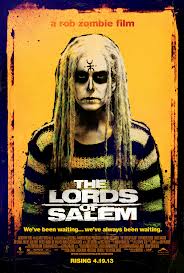 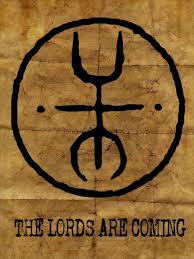 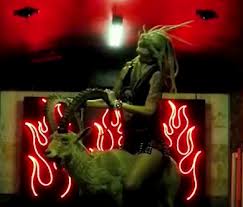 By Tammy Moore aka Metal Freaktress

Screaming, cackling, vicious witches making wicked music, naked, in pitch black woods around raging fire and chaotic embers… It’s just the beginning of the demented delusions that kick start Rob Zombie’s The Lords of Salem. When the credits rolled at the end of the movie’s premier at SXSW last month, Sheri Moon Zombie’s mug and ID flashed across the screen and the crowd roared in applause. The weight of this film falls squarely on the shoulders of the famed horror director’s cherished wife and leading lady. She nails it as her portrayal of a woman’s spell-induced possession elevates her acting prowess to new heights.  While he is regarded world-wide as the super talent that has shattered ceilings with his phenomenal successes in both the film and music worlds, the enchantment of their latest endeavor is, without a doubt, the result of a very particular chemistry generated by this extraordinary union that seems propelled by, yeah, we’ll call it… destiny. The result is a movie you’ll love or hate but you won’t walk away unaffected.

The seed for this feature was planted a decade ago when the Zombie’s attended a friend’s wedding in Massachusetts. While killing time in the hotel gift shop, he came across a book on the Salem witch trials and has since brought forms of the story to life in no less than four different mediums – a song, an animated video, a film and even a novel released in March.

The movie version of The Lords of Salem is undeniably influenced by and pays homage to the special constitution of late 60’s / early 70’s sinister cinema, circa Rosemary’s Baby era. It also begs the question of how much Zombie was influenced by famed Italian directors like Lucio Fulci or Dario Argento? “It wasn’t a conscious effort at first,” says the seven-time Grammy nominated rocker-turned-film-director of his sixth motion picture. “It was just that as I started working, it became apparent that the style of movie that was starting to form had a very European sensibility and, as we were shooting, I go, ‘I don’t know what’s going to happen in America but they’re gonna fuckin’ love it in Italy!” He was right about that audience as they completely embraced the film for its kindred feel to Argento. But for Zombie, it really came down to thinking about whose movies “just feel weird even when nothing weird is happening… Like Argento’s Susperia, and any Lynch or Polanski films. Those are the films I would look at and think, ‘oh, these have that sense of dread at all times, even when nothing is really happening, which I thought was important. I like the style I’ve done in the past, especially Halloween II. I love when movies look like that. I like really rough, raw looking movies. But I didn’t think, for this movie, it was appropriate.”

Fittingly, music plays a delicious role in this flick to the degree that it is an entity in and of itself. The big thing for Zombie was that he didn’t want the score to sound modern. “If I’d had more money I would have set this movie in the 70’s but period movies get pricey. And I knew, especially in Salem, we were going to be stealing the shots. We have no permits. We’re just gonna start shooting until a cop shows up. If it had been set in the 70’s, we’d have had to replace all the cars, all the signage, all the clothes and we couldn’t do that. But, with that being said, I said, “John (5, lead guitarist of Zombie’s band who he enlisted to score the movie), make it sound like you recorded it in the 70’s. Everything vintage… even with the creepy witch music it was all weird acoustic instruments. It was all done live. None of it was digitally created.” John 5 delivered exactly what Zombie had hoped for in that this music can accurately be called a presence.

And then there was the collaboration with his wife on the character of “Heidi”. Ask Zombie for his take on their working relationship and he’ll tell you that it’s a weird dynamic to discuss. “I’m not quite that conscious of it because I try to keep it the same as with all the other actors. I don’t really show her things before anyone else sees it. And every actor’s different. You just try to know what to do to push their buttons and make it work.”

But after being together for over 20 years, she is his life partner above all things and that also makes her his conspirator on set. “I usually feel bad for her,” he says, “because she knows too much. Like the other actors don’t know all those dark secrets of what producers I hate and who’s ripping us off and all the bad shit that’s going on… I try to keep it away from her but I just can’t sometimes. Unfortunately for her, she never gets a break from it.”

Does he take the opportunity that marriage creates to mold her characters more? “I don’t really try to do that because when we’re home I don’t want to be like, ‘oh, well, they get to work 8 hours a day but you’re gonna work 24 hours!’ In fact, it’s probably the exact opposite because I would like to do that, discuss it non-stop, all around the clock, but, again, I know that’s not fair because she needs a break from me just like everyone else.”

But her story is that he makes working fun for her. When asked if she would continue to work with Zombie exclusively SM Zombie said “Well, I have branched out and I have done other projects, but, I have so many interests in life and I’m not just cornered into acting here as the only thing I do. He always gives me great creative opportunities. We have a great partnership and it’s so much fun and it’s easy. I totally trust him. As an actor the trust thing is really important. You can walk on to a set and just be treated like shit. I like to be part of the fun creative part, not the bullshit business, and working with Rob secures that for me.”

On the subject of faith and the role it plays between them as actor and visionary, she says, “You just have to trust your director. Even what was written on the page in the script, for me, I couldn’t visually picture what it was actually going to look like until I was on set.  And even then you’re there and you’re in that world but there’s the whole process after… the editing and all that stuff they do that makes it. It’s a whole magical experience, I think, to be a part of. So… total trust for me… especially when I’m naked! It’s just the worst!”

And it feels like she’s naked a lot in the film. Scantily clad would be a more apt description for the majority of Heidi’s time on screen but Zombie’s ongoing ability to translate his wife’s sensuality seems to have evolved into a full on trademark in the new film. Perhaps only a husband that seems to interpret his wife as fine art herself would be capable of transferring the intimacy of her essence the way that this man does.

The Zombie’s also worked closely together on her character’s look… impressive in that it is a stand-out departure from how fans have grown accustomed to seeing Mrs. Zombie portray women in films before. The Lords of Salem victim is iconic with long blonde dreads, originally designed tattoos and a wardrobe so informed by the 70’s that it’s more the vernacular the characters speak in that helps the viewer figure out initially that they are, indeed, in the present moment. Black rimmed glasses are thrown into the mix and one might assume they were designed to emphasize Heidi’s intellect but, I’ll go on record and say they must be meant to sexy the woman down somewhat. I barely remember a scene where she wasn’t wearing thigh high socks that would drive most mortals to distraction. But the look conjures another kind of magic by drawing the viewer in for an even closer look at this protagonist.

Jeff Daniel Phillips, who joined the glam rock couple for the interview and stars opposite SM Zombie in The Lords of Salem, says of the their relationship, “He trusts her too. Who would you choose but your wife? She’s game to help fulfill the vision. You don’t have to deal with some head game.”

“Oh, there’s head games with me,” SM Zombie playfully interjects. She laughs and touches on shooting the feature in four weeks. “I worked practically every day on this film. There were days where I had a 7-page scene after just having a 5-page scene and I’m like, ‘I can’t do this! I can’t do this!’… and then he’s a director…”

“… and pulls it off,” Phillips completes the sentence knowingly. He’s seen them in action.

And her evolution as an actress is evident, too, in her chemistry with Phillips’ character. They chalk it up to weeks of rehearsals but there’s a subtlety in both performances that resonates something more: marked talent. SM Zombie humbly says that she was lucky because the first week of shooting was in sequential order and the slow decline of her character was followed by that, as if it made her job easier. She says that her husband’s choice of locations, lack of sleep from a relentless shooting schedule and even grungy dressing rooms added to the genuine darkness of her performance and the overall eerie feel of the flick. Still, she’s added another layer of contrast here to the characters she’s capable of playing and it all adds up to her being a de facto force that staunchly enhances her brilliant husband’s vision for this story.

When the subject of past accusations of nepotism rears its head, SM Zombie isn’t fazed. “I mean, a lot of directors work with relatives or they hire the same actors all the time so that means nothing to me.” And why should she have to justify it anyway? The Zombie’s magnetism in their work translates into art compelling enough to move us emotionally one way or the other, and isn’t that the point? They succeed wildly to that end. They just happen to be soul mates and seem to recognize their great fortune in that.

Regardless, Phillips jumps to her defense. “You know why she gets singled out? It’s because she doesn’t do a lot of other projects. She chooses to work with him and then people automatically assume, ‘well, she can’t get work outside of him. But it’s her choice. She doesn’t want to go out and just work with anybody, knock on doors, audition. So that gets seen as weak but it’s not… that’s her choice.”

And there it is. A life choice in personal and professional alliance, rooted in the self-actualization of two very talented people who savor creating art for us to interpret as we will.

The Zombie’s had a motto before every take in The Lords of Salem: Let’s get weird.

They did that. And it works… like their own brand of monster magic.