Few bands pull off “throwback” metal as well as Toxic Holocaust. I don’t even know if throwback metal is an actual subgenre, but what else could you call a band who so perfectly captures the nuances of legends like Venom and Bathory, while adding a modern edge to keep the sound fresh and relevant? Call it blackened thrash, call it crossover, call it whatever you’d like – just so long as you recognize the impact Joel Grind and projects like Toxic Holocaust have had on bringing a younger generation of metal heads into the fold.

Founded by Joel Grind in 1999, with several releases since, including a new record due out in 2018, Toxic Holocaust recently completed a tour with Venom Inc., Goatwhore, and The Convalescence. I met up with Joel shortly after his set in Austin at Come and Take it Live! to talk about what’s next for Toxic Holocaust and for updates on some of his other projects. 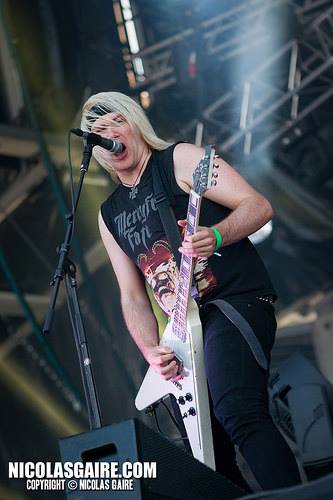 VH: You’re halfway through this tour with Venom, Inc. and Goatwhore. How is it going so far?

JG: It’s amazing! When we got asked to tour with the Venom guys – I mean, that’s probably my favorite band, and the main reason I started Toxic Holocaust to begin with. It was a no brainer, really. And then, when I heard Goatwhore was on board, we’ve toured with those guys before and have become close, so this tour has been really great. All the shows have been cool and the lineup is working really well together.

VH: You have toured quite a bit this year. You were on the road with Nails, you played Psycho Fest in Las Vegas, and  you’ve been doing some longer runs than in the past. Are you going to be touring more with Toxic Holocaust?

JG: We’re going to be taking a little bit of time off because I will be finishing the new record. Right now, it’s pretty much recorded, except for the vocals. I’ll be recording the vocals in November, and then mixing in December. I’m working on finding a label for the release as well. I think I know who may release it, but I’m not certain yet. Once all of that is figured out, it will be out in early 2018, and we’ll start touring more on that album release.

VH: That’s exciting! It’s been a few years since the release of Chemistry of Consciousness and I know a lot of folks are ready to hear the new record! Speaking of recording and projects… are you going to be recording more with Tiger Junkies?

JG: Actually, yeah. We have a new record coming out soon. I’ve got to do vocals on it, I’ve been waiting to do the vocals all in one shot. But, yeah. It will be a full length album and that should be out sometime in 2018.

VH: Awesome! What about a Yellowgoat tour?

JG: I never thought much about it until this tour, actually.  A lot of people have been asking, so maybe? When I did that project, it was around the same time as the last Toxic record. It was a throwback to early Toxic and of course, Bathory. I did it for fun. Once it came out, people were actually into it. People talk to me about it, I’ve seen a few Yellowgoat shirts on this tour – so maybe? You never know!

VH: I noticed you had some of the Yellowgoat merch out!

JG: Yeah, this is the first tour I’ve done that. I released the Yellowgoat record myself, very DIY, I did one pressing and it sold out. So, I did a second pressing and I’ve got it available.

VH: You mentioned you’re writing and recording vocals, plus doing the mixing for the new Toxic Holocaust record…

JG: Yeah, and I’m also doing the drums on the new record…

VH: What is that like, to wear so many hats? To switch from the creative/artistic side to the technical/sound side?

JG: It’s actually pretty fun! I get a bit bored when it comes to just doing one side of things. When I was just touring, I wanted to take some time and actually enjoy where I live and have some normalcy, you know like going to that one same coffee shop every morning? So, I started the recording studio. Now, I’ve got the itch to start touring again. It’s a weird thing – I like mixing it up so I don’t get stir crazy with just one thing.

VH: We need to address one more of your side projects, probably the one that is nearest and dearest to me. Of course, I’m referring to Memphis Devil Shit! Are you going to do any more rap/hip hop mix tapes?

JG: [laughs] Cool! I’m going to do a Part 2 of that, actually. I had so much other stuff that I didn’t put on the first one, because it would have been way too long.

VH: I have to tell you how much I appreciate the way you honor good music. You pay homage to great metal with your projects, and the Memphis Devil Shit release mix tape touched a chord in me, being from Houston where we have great hip hop and rap like DJ Skrew and such – it just seemed like a nod to another great genre. It’s rare to find a metal artist who can appreciate such different genres!

JG: Well, thank you. I’m just a huge music fan, period. I was really into the Lo-Fi rap, kind of evil lyrics for a bit, and decided to do something that might show fans of my metal projects a different type of music.

VH: Do you think you may have opened the doors for some “metalheads” to a genre they might not have otherwise known?

JG: I mean, I hope so! I think so. I was playing in Arizona and had people yelling out “Memphis Devil Shit!!!”. I’ve never had that happen. It was very weird, but very cool to have fans at a metal show yell out that mixtape, you know?

VH: From a sound and mixing perspective, what projects do you enjoy most?

JG: Of all the bands I’ve mixed, Poison Idea has probably been the highlight so far. That’s a band I grew up with. I never thought I would eventually have the opportunity to work with them, so it was a bit unbelievable to have that opportunity.

In terms of types of sound, I really enjoy the more punk, hardcore, or thrash stuff. I record a lot of grind core too, and I really enjoy that, but it can be challenging. Sometimes the direction I want to go isn’t necessarily the way the bands want it to sound. Some of the bands want a modern style of production, and I like the more raw, over the top, blown out sound. Obviously, I do what the bands want – it’s their record! But, my heart lies in the raw punk, thrash, sound. I think that would sound killer on a grind core record, but I haven’t gotten anyone on board with that yet [laughs]

VH: Are you still affiliated, or working, with Audio Siege?

JG: Not technically, but we still work together and it’s a great relationship still. I still will record and he will master, but he wants to focus on his brand and the mastering side.

VH: So, what was the band, the artist, the video, the show, etc. – “THE moment” where you knew music was it for you and that it was what you wanted to do?

JG: Actually, it’s kind of weird. I was really young and I saw a movie called “The Gate”. It was a shitty horror movie from the 80’s, but I remember the kid in it had a Venom back patch. He’s a D&D nerd who’s really into metal, and he buys a record by a band called Sacrofix, which is the coolest band name ever, spins it backwards and it opens the gate to hell in his backyard. So, that’s the coolest shit ever. He has to fight the devil or a demon at the end or some shit, but I just remember being really young and thinking, “okay. Metal is really cool! I gotta know more!” I would always look for back masking on records after that for awhile.