Deep Thoughts with DEP’s Will Little 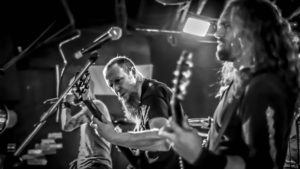 VH: You grew up in the Austin scene of lore, what was your first show?

WL: Ha! Now you want me to show my age. Well, my first show was Judas Priest for The Defenders of the Faith tour. Like 1984? As for Austin music? That would have to have been seeing Watchtower, with Jason McMaster at the helm.

VH: What about your favorite show?

WL: There have been so many! I think my favorite show had to be Slayer for the South of Heaven tour with Motorhead and Overkill. So many people were moshing (real moshing, not any of that banging around you see today) there were 2 separate pits! The venue they played in is an office complex now.

WL: I think that Austin has a big identity crisis going on right now. Austin wants to still be the “Live Music Capital of that World”, catering to all the festivals and such, but is losing touch with its local scene. The city has had to institute sound ordinances to placate all the new people moving into downtown. They want to have the best of both worlds, but unfortunately, those worlds are clashing right now. I see that as what is detrimental to the future to the music scene in Austin. Don’t get me wrong though, I was born and raised in Austin. I love this town. I watched it transform from that kooky, quirky little town, to the large, tech driven modern city of today. The improvements I see are with the people within the scene. I think the bands and fans are doing more than ever to try to promote our scene and keep it alive. The people are the heartbeat of the scene.

VH: Tell us a bit about your rap sheet leading up to Dead Earth Politics. What other bands were you a part of. Any claims to fame?

WL: In the beginning, before DEP, there was only darkness. An empty void.

Seriously, before Dead Earth Politics, I was in a few bands, nothing that ever panned out really. That is the hardest part about forming a band. Finding people that not only share your taste in music, but also people you can stand hanging with in a van for extended periods of time without the random homicide. 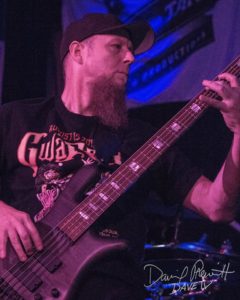 WL: In 2003, friends of mine, Ernie Clark, Chance Polston, and Mason Evans had started a project and asked if I would like to participate. At that time, I had quit playing bass for the last 12 years to pursue a career as a professional motorcycle racer. Chance was playing bass at the time. They asked me to be the singer, believe it or not! Well, Chance didn’t want to gig, so I borrowed a bunch of gear and took up the mantle of bass player. That left us without a singer. Over the next year or so, we went through a couple of vocalists, but nobody that really stuck around. We eventually put an ad on Craigslist and found Mr. Ven Scott. The original lineup for DEP was Mason, Ven, Ernie and myself. Ernie eventually went off to make babies and write the great American novel. Then someone left Tim Driscoll on our doorstep with a note and a guitar. We bought Aaron, our 2nd guitar player, for $2.75 and a sixpack of Natty light.

VH: You’ve been with the band since its inception. You recently made the choice to step away from the band, just as DEP signed with Pavement. To many, now would seem like the least opportune time to step away. After so many years building a brand, why is now the right time for you to say goodbye?

WL: Now we get to the million dollar question. Why would I leave when we are at the top of our game? Well for me it has, and always will be, about the music and my craft. Music is a jealous and unforgiving mistress. To master her, to excel and reach that next level, you must give her your heart and soul. Most times that leaves little time for anything else. I felt that I could no longer give the music and the band the time and effort that I believe was necessary to contribute to the success the band was looking for.

Personally, fame and notoriety was never my endgame. For me it was about playing to the best of my ability and enjoying the music as long as I can. It was probably one of the hardest decisions of my life. I have been with this band for 10+ years. It has been a part of me. It was who I am. My bandmates were my brothers. I may not always have liked them, but you build a bond from synchronizing and connecting through the music. It was like saying goodbye to family. 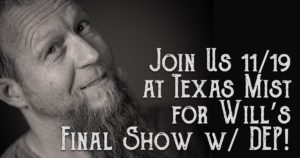 VH: You played your last show with DEP a few weeks ago at Texas Mist in Austin. Can you put into words the feeling of playing that last show with your brothers in arms in your hometown?

WL: It was bittersweet, really. It was a great show to end on. I very much enjoyed the venue. I was so touched by all the well-wishers. It made me realize that I had made an impact on our fans and many were truly sad to see my leave. I have received so much support from the band. I really hope that they find someone that fits in and gels.

VH: What is your favorite memory of your time with DEP?

WL: I don’t know if I could pick a single memory. We have had so much fun. My favorite memories are the moments we really mind-melded during a song. Most times it would only occur for maybe 20-30 seconds in a song, never a whole song. That moment where you are in perfect sync together. It is almost like a momentary high. An athlete might describe is a being in the zone. That perfect moment.

VH: What are you most proud of accomplishing as a musician? Any regrets?

WL: Being a part of DEP has definitely been my proudest of accomplishments. It started out as a reason for some guys to get out of the house, and grew into a beast of its own volition. We won best Austin Metal band by the Austin Chronicle for 4 years in a row. And I hope that they win for a 5th year.

VH: What’s next for you?

WL: I am working to put my career forward and spending more time with my family. I am 45 now. My son is in high school and will be leaving the nest before I know it. I want to be there to guide him into manhood and, who knows, maybe I will write the next great American novel.

VH: Will, thank you for your time, your humor, and your contributions to DEP. It has been an absolute honor to share the road, a stinky van, and a passion for music with you, brother! While I have every confidence that DEP will find an humdinger of a 2.0 bass player, you will truly be missed.

Update: Lennis Hayes has been welcomed into the DEP Brotherhood. Welcome, Lennis!

This entry was posted in Interview and tagged Dead Earth Politics, DEP, Texas Mist, Will Little. Bookmark the permalink.